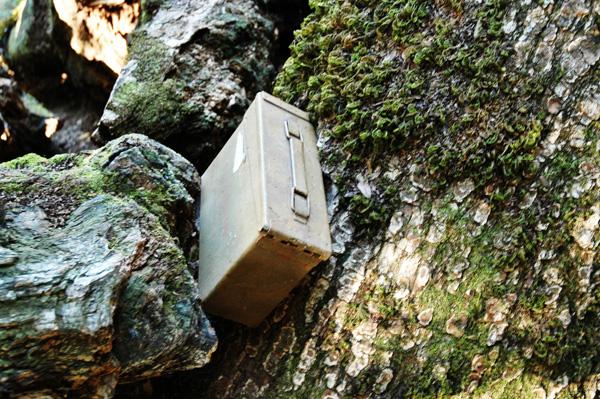 A cache hidden in the Los Tranceros Open State Preserve, found in a tree.

Sticks and rocks impede our progress as we follow the path outlined by the map on our iPhone, leading us towards the stick-strewn Franciscan trail at the Los Tranceros State Preserve. As the line indicating the distance to the treasure shrinks, our hearts race and adrenaline levels spike. A pop-up indicating that the target is within 30 feet, prompting an inch-by-inch examination of every surrounding shrub immediately off the path. Eventually, the prize is spotted — in a tree.

Scaling the hill and tree trunk is one feat; getting down is another. “GEOCACHE” in large letters is etched on the top of a grey metal box, nestled in the nook between two branches. Maneuvering between spider webs and imposing moss, we finally reach the prize. After forcing the semi–rusted lid of the cache open, we find an array of pencil caps, erasers and stickers.

Caches vary in size, shape and content. Each is unique, though all belong to the same community — geocaching. A glorified treasure hunt, geocaching allows users to hide a box or other receptacle containing a logbook and an assortment of trinkets. Upon discovering the cache, other users log their find with the date while trading the original trinket with one of greater or equal value. The only requirement is that you must replace what you take.

“Stickers are always lovely, and little eraser things from elementary school, weird [things] and just things that you have from forever ago, that you don’t realize you had are always really good,”  says Palo Alto High School junior Jamie Garcia, an active geocacher for the past six months.

Garcia started geocaching because of her friends’ interest in the activity.

“My friend from choir told a couple of us about it, and we decided to go together because it sounded like a good time,” Garcia says.

Paly sophomore Sean Jawetz, a geocacher for the past two months, reflects these ideas. 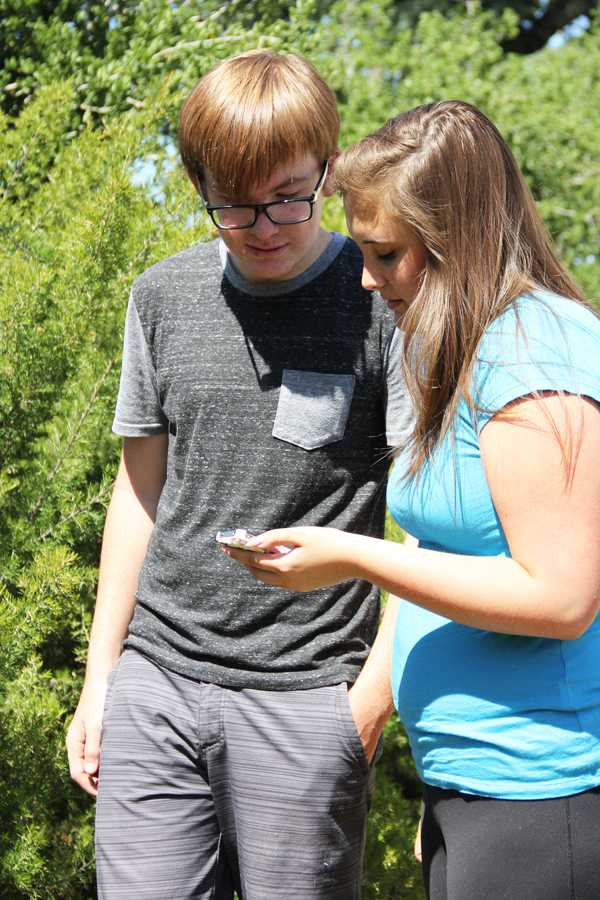 “Geocaching is just a fun thing to do with your friends instead of doing homework,” Jawetz says. “It’s a very undercover thing, because no one admits that they geocache, but everyone does it.”

According to the geocaching website, there are millions of people geocaching that connect through their desire to go on an adventure with friends — even if it only takes them a block away. Geocaching can be tailor made to your willingness to explore the world around you, and in this respect, it is very user friendly and can be attractive to anyone.

“You’ll be talking about it and people will be like, ‘no way, I geocache too,’” Garcia says. “It’s much larger than we think it is.”

Paly senior Paige Brown has been an avid geocacher since earlier this year. She likes the community that geocaching fosters.

“When you are signing the log it is always cool to see when it was found last, and often it’s only a day or two ago,” Brown says.

With so many geocaches available, the locations of the geocaches vary from our very own Paly campus to the top of a mountain, or even hidden within your favorite local park. An assessment of the difficulty of the terrain and location is provided in the description of the geocache in the Geocaching app. The app allows users to track their progress in real time, providing the cache location, hints for finding the cache and user reviews. Caches can also be in unexpected locations, such as underwater or even over your local freeway. 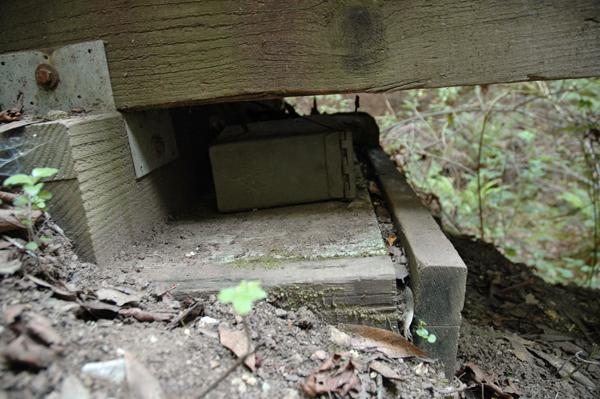 A cache hidden in the Los Tranceros Open Space Preserve, found under a wooden bridge.

“[We had to] climb through poison oak,” Garcia says. “We were at Foothills Park, and we found one [while] it was raining. It was very easily seen, but we look at the cache and it was covered by poison oak, and we had to fight our way through it.”

Cache’s come in different styles, the most popular being the traditional geocache, consisting of a box, logbook and trinket. As you progress to different types, the caches get more difficult, sometimes requiring two or more locations, dubbed the Multi-cache, or forcing the geocacher to solve a puzzle or riddle before the location is revealed in a mystery or puzzle cache. Garcia recommends geocaching to others.

“I think people just don’t give it a chance because they think it’s super lame, but then you go and you realize it’s really fun,” Garcia says.   v