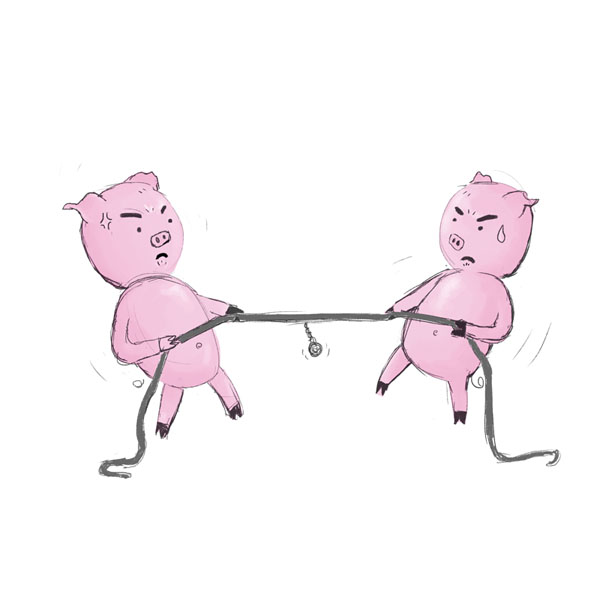 They’re large in number, they’re unstoppable and they’re more than just funny — they’re punny. The Punstoppables Facebook group is full of posts about famous composers decomposing after death, perfect vision in the year 2020 and un-chord-inated tone-deaf singers, all published by Bay Area high school members for others in the group to view and enjoy.

What do you get when you play tug-of-war with a pig? Pulled pork. Posted by Matthew Zheng

Every day, an endless stream of posts floods members’ newsfeeds with comments and likes bumping the most popular jokes to the top and pushing other posts far beneath the scroll threshold of the average internet peruser. The group collectively produces more than 50 jokes a day and its content is, quite appropriately, unstoppable.

However, the unexpected growth of the group’s membership has led to controversy and competition within the seemingly light-hearted realm of the Punstoppables. The group that began as a fun social outlet is now experiencing symptoms comparable to what puberty experts call, “growing pains.”

According to Cupertino High School sophomore and Punstoppables founder Agnes Jang, the group began as a way to share puns with her close friends. However, as friends added friends who then added more friends, Jang says the group quickly grew from around 20 people to its current membership of about 11,400, mainly high schoolers from the Bay Area, although members hail from as far as North Carolina and Texas.

As the membership expanded and diversified, the group’s content followed along the same trajectory. Palo Alto High School junior and Punstoppables member Molly Mackris says many of the group’s posts these days are memes.

Jang recognizes that limiting the content to puns is futile.

“At first I kind of wanted to limit them [the jokes to only puns],” Jang says. “But as the group got bigger and bigger and the number of posts increased, it’s kind of impossible to take down everything that’s not a pun.”

Punstoppables administrator Lynbrook High School sophomore Brandon Strong says he mainly deletes only the posts that get too much attention.

“It’s usually an offensive post,” Strong says. “Someone gets offended and goes on a debating spree, which I have nothing wrong with; it’s their opinion. I only get rid of it if the debate isn’t concluded in a reasonable amount of time.”

With the Facebook group system organizing posts based on popularity, Strong says the posts with the most comments — usually arguments — often get pushed to the top of the newsfeed.

“Posts get their due exposure,” Strong says. “But when a post from last Thursday is at the top of the page, no one wants to see that.”

Though members may tire of certain posts, new arguments pop up every day. According to Mackris, there is almost always word-wrangling in the comments, and not always the punny kind.

“I look at the comments immediately because I know that there’s always controversy in the comments,” Mackris says. “There are fights within them [the comments] about what’s offensive to who and who matters more in terms of what you post, and it’s definitely a problem.”

In an April 2014 Punstoppables post that was for once, not a joke, an admin explained that a post about self-harm was deleted because a user complained and found it offensive. One member praised the admins’ actions in the comments, while another claimed that if posts were being taken down because members were offended, the various puns about the Holocaust and the recent lost Malaysian Airline flight should be deleted as well. More recently, in May 2014, a user was reported to the police for posting a libelous comment.

According to Jang, the culture of the group has changed from friendly pun sharing to a competition for attention, with the most popular posts, often about controversial topics, collecting as many as 1,000 likes.

“My original intention was just to make people laugh,” Jang says. “I wanted people to go in there and scroll down and laugh at dumb puns … It’s [the group] for enjoying and sharing and not for the aim of getting likes.”

Mackris agrees that inside Punstoppables, there is a strong sense of competition.

“It’s just very cutthroat, to be honest,” Mackris says. “It’s all measured in likes, which I think is ridiculous, but it’s true.”

Palo Alto High School sophomore and Punstoppables member Griffin Carlson says that there is a lot of backlash in the comments of most posts.

“A lot of people don’t know each other so they don’t really care as much what they say to the other person,” Carlson says.

Because the Punstoppables has so many members, each user is relatively anonymous. Mackris says the impersonal nature of the group has its ups and downs; on one hand, the anonymity makes it easier for users to harass one another in the comments of posts. On the other, the jokes can bring people together to mutually “lol” over a clever twist of words.

At the end of the newsfeed, “We’re all just strangers who appreciate puns,” Mackris says.