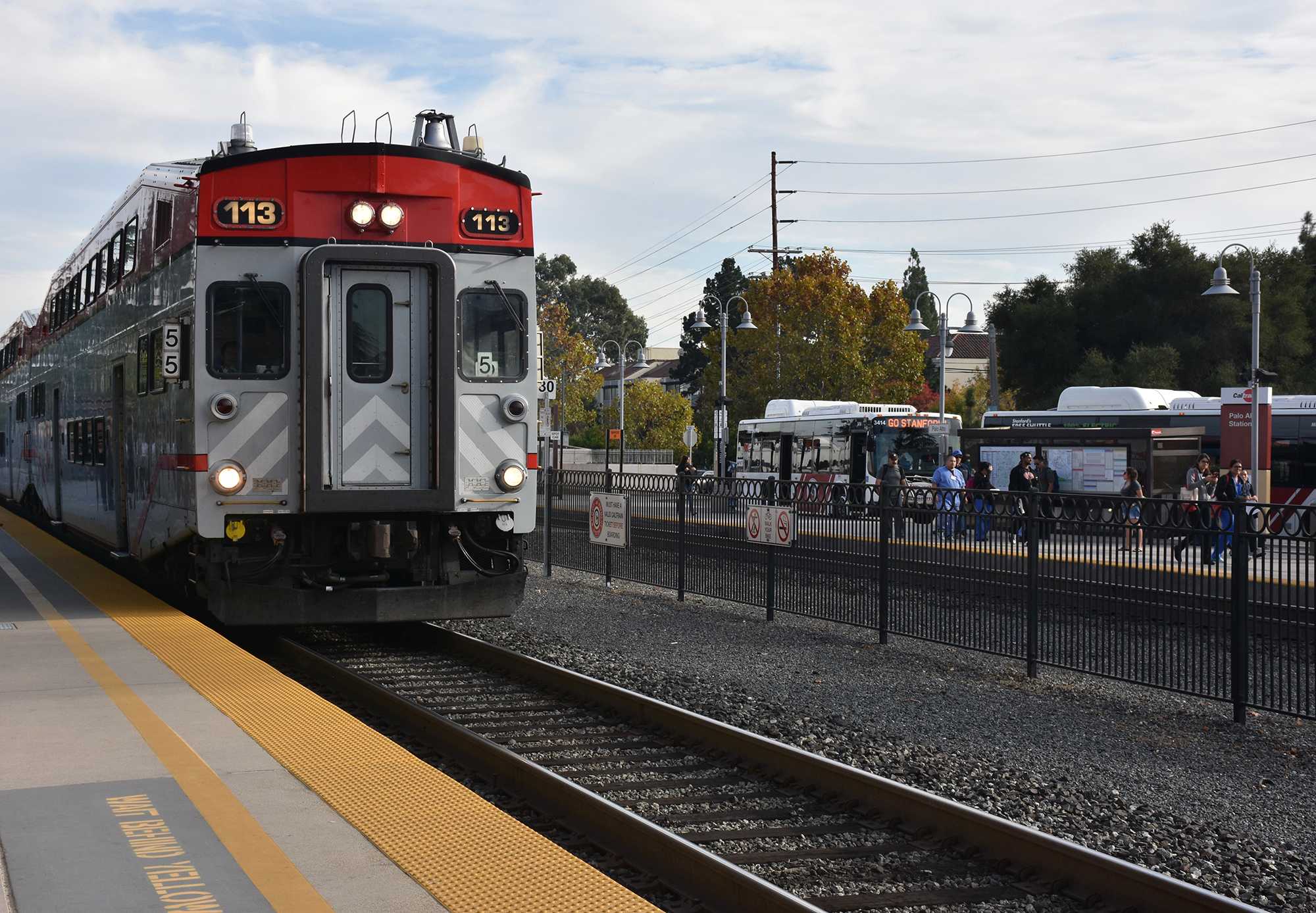 Where Are We Headed? The Future of Getting from Point A to Point B in the Bay Area

A CalTrain roars through the University Avenue CalTrain station in a blur of red and silver, creating a large gust of wind that tousles hair and threatens to blow hats away. Gesturing animatedly and raising her voice over the din, Debra Kahrson, a postdoctoral student at Stanford University, sings her praises of public transportation.

“I think the decreased carbon footprint [that comes with riding the train] is really awesome,” Kahrson says. “Also, I just like riding public transportation. … It’s pretty fun. You get to stare out the window, do some work, read some books, catch up on your podcasts and call people out over social media without putting other people’s lives in danger.” 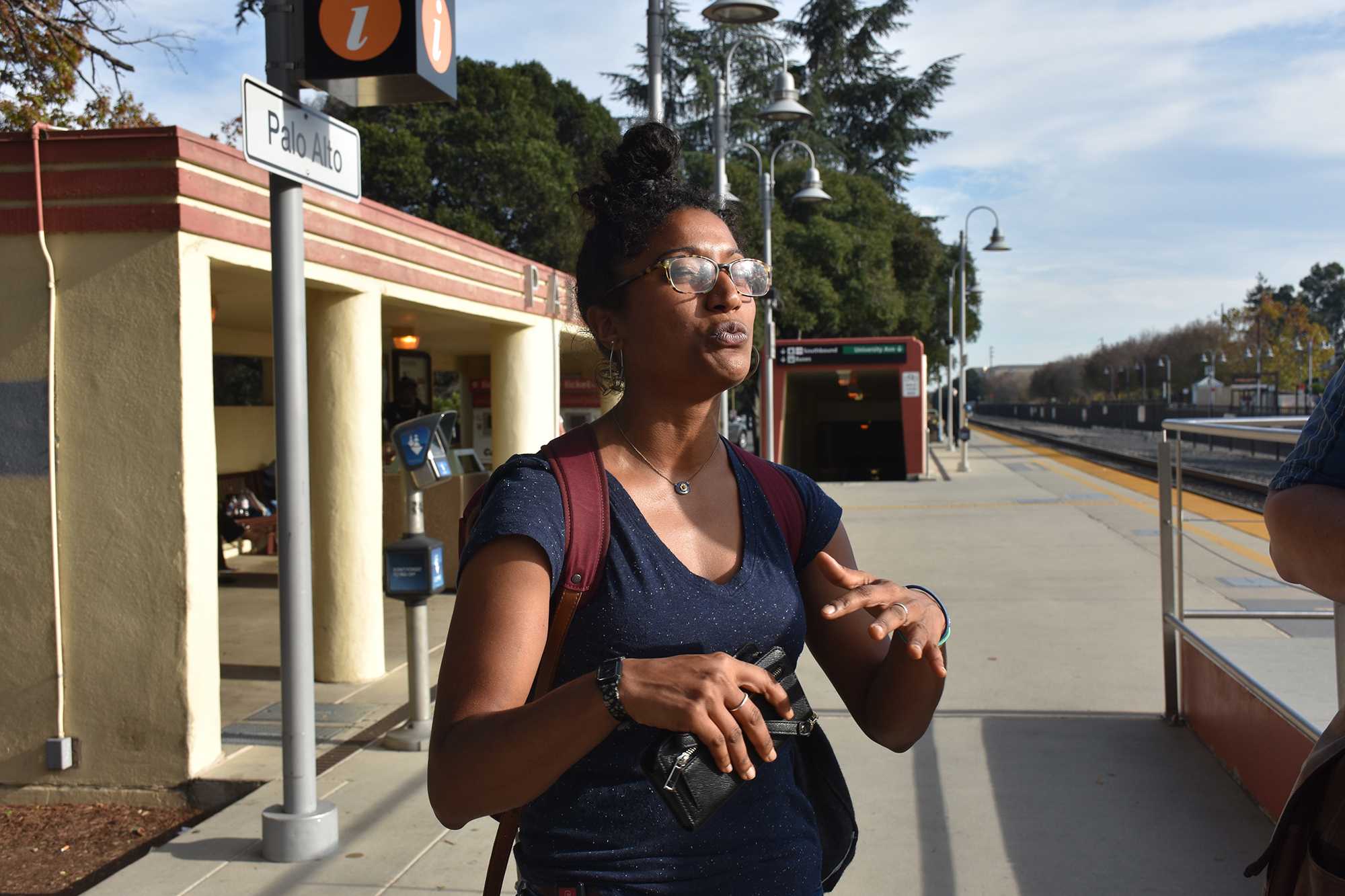 Kahrson gestures enthusiastically as she declares her love for public transportation. “I love eavesdropping on people’s conversations on the train,” Kahrson says. Photo by Michelle Li.

“When I used to sit in an hour and a half of traffic every day, literally worried for my life sometimes with people cutting me off,” Szebert says. “I basically got home and couldn’t function because I was just so tired from the drive. My life standard has definitely drastically increased since I’ve been taking the train.”

Like Kahrson and Szebert, many others who work and reside in the Bay Area rely on public transportation to commute from far-away homes to their jobs while reducing greenhouse gas emissions and the demand for resource-intensive production of cars.

Emissions have recently become an important concern to the public due to indications from our new president that he will pursue a climate change agenda that is starkly different from that of President Barack Obama, as evidenced by the fact that Donald Trump has alluded to the possibility of removing the Environmental Protection Agency, discontinuing Obama’s Climate Action plan and withdrawing from the Paris COP21 accord.

With these concerns in mind, public transportation is on track to become the future’s method of getting from point A to point B; however, easy access mass transit still faces hurdles on the path to ubiquity, including a lack of funding before November and dearth of low-income riders.

“About 19 percent of the employees are commuting by transit, which is fantastic,” says Hillary Gitelman, the director of the city’s Planning, Community and Environment Department. “Only about 57 percent of the commuters are using single occupant vehicles, and the rest are [using] transit, non-motorized travel, like bikes and walking, and ride-share services.”

Students also rely on the free cross-town shuttles to attain greater mobility.Hannah Pan, a junior at Paly, values public transportation for a variety of reasons.

“Public transportation has made a positive impact on my life,” Pan says. “I get to … spend more time with my friends on the shuttle, which makes it more meaningful.”

Despite its benefits, the shuttle system remains imperfect, and some students call for its reform, like Miguel Moreno, a junior.

“There needs to be an increase in number of shuttles on popular routes,” Moreno says.

A variety of benefits stem from public transportation usage, including a decrease in commute-related stress in addition to a reduced carbon footprint.

“It [taking public transportation] is very positive,” Szebert says. “I can relax on the train, and my focus doesn’t have to be on staying alive because when you’re driving you constantly have to watch for other cars and driving is dangerous. Also, it’s just better for the environment.”

Szebert, who gave her car to her brother and now relies solely on ridesharing services and Caltrain, says that as a result, she has reduced her carbon footprint significantly.

“Getting rid of my car has helped the environment in many ways, not just the everyday burning of fossil fuels, but my brother doesn’t have to use all the resources to buy a brand new car,” Szebert says.

On the other hand, in cities like Palo Alto, many families own multiple cars and drive them on a daily basis, which is detrimental for the environment. 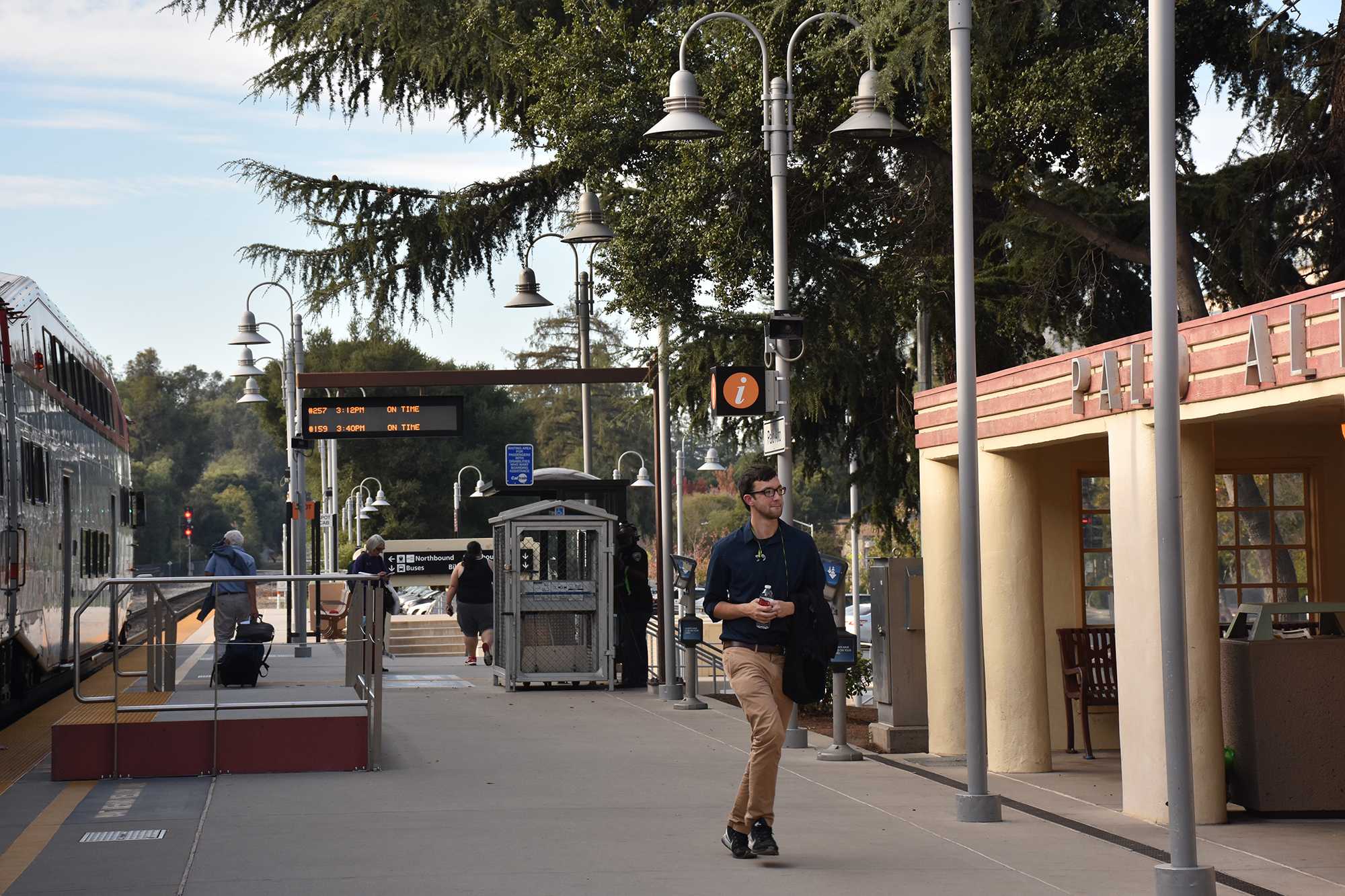 The CalTrain station near University Avenue provides a convenient stop for those employed Downtown or at Stanford University. Photo by Michelle Li.

Many have started to take advantage of the plethora of benefits that mass transit provides, thus, it seems self-evident that the next step should be to expand the Bay Area’s public transportation network to allow more people to access its benefits.

“We are really struggling with transit capacity in the Bay Area because ridership has gone up since the end of the recession,” Gitelman says. “CalTrain ridership is through the roof. These are huge infrastructure projects with huge costs, so that is going to be the challenge for the next 20, 30, or 50 years. We have to as a region address transit capacity and liability, just make it more convenient for more people to get on the bus or on the train.”

Szebert, who brings a perspective from San Francisco, believes that the city’s most pressing need is a dearth of rider capacity. Looking to other large cities, Szebert believes that San Francisco should model New York’s system of subways.  “I think more trains, bigger trains, more of a system of subways in the city would be very, very helpful. I think that would alsoalleviate traffic,” Szebert says. “The more people that could take public transportation, the better it would be for everybody.”

Frequent rider Bryan Sheehan, a worker in downtown Palo Alto,  takes a different approach to public transportation reform. Instead of increasing the number of trains, he expresses interest in future efforts to have trains run more often.

“A little more frequent trains or not having them [the CalTrains] all stacked together at one time is something that I would like to see,” Sheehan says. “For the train I take in the morning, I have to get there by 7:45, and then there’s one right after 7:50 and then at 8. But if I miss that train, I have to wait  for 45 minutes to an hour for the next one.” 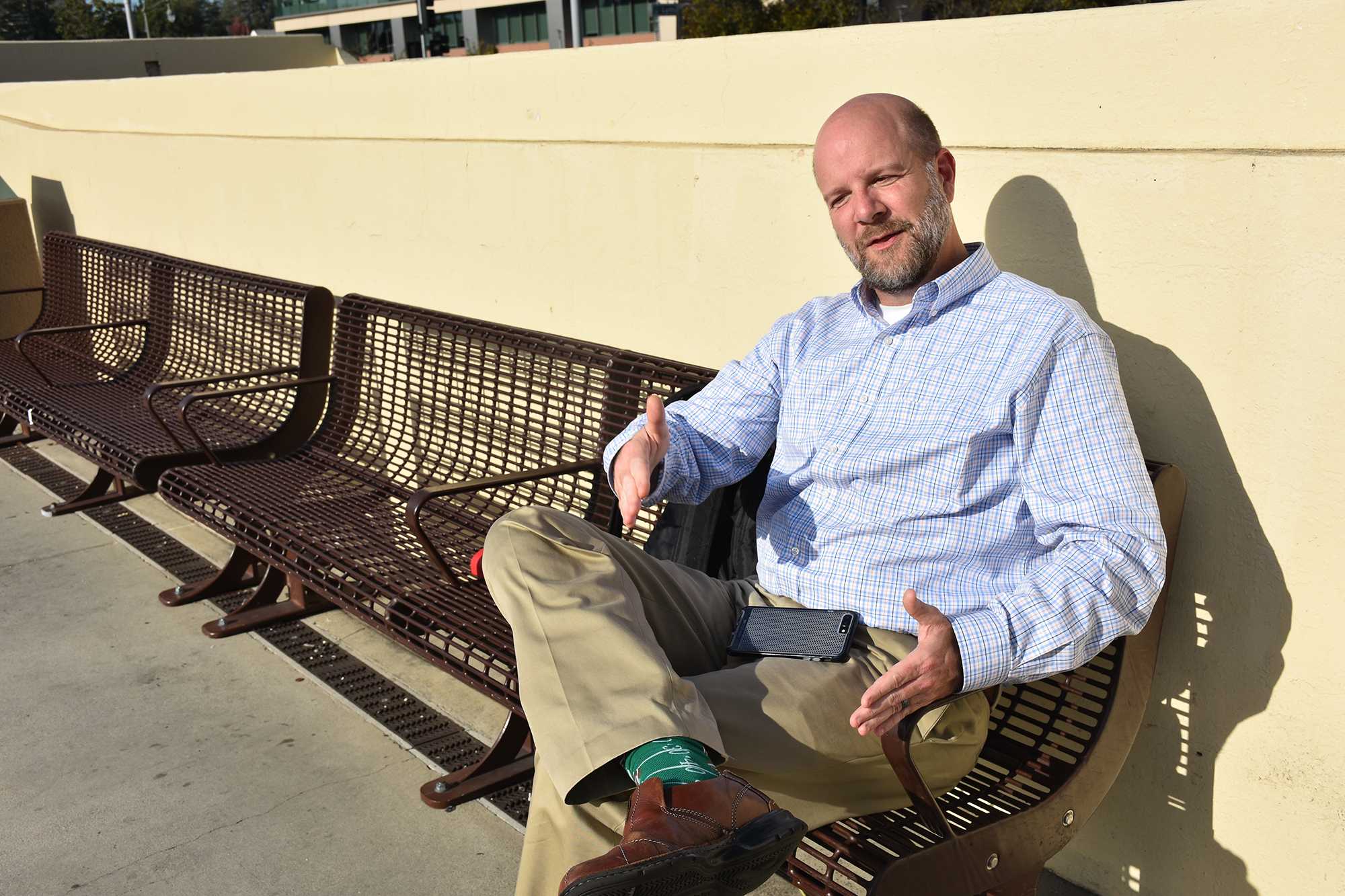 Sheehan, who works downtown, praises CalTrain for being quick and convenient. “Not having to sit in rush hour traffic is the biggest thing [reason why I take CalTrain],” Sheehan says. “I also can’t do any extra work in the car.” Photo by Michelle Li.

In addition to expanding the system itself to accommodate more riders at more frequent times, the next step should also include outreach to populations who historically have not used, but could benefit frompublic transportation. Currently, public transportation can be very expensive, thereby rendering it inaccessible to citizens with lower incomes in poorer communities.

“Service workers, who are lower income and maybe working multiple jobs, are more likely to be using single occupant vehicles,” Gitelman says. “They are less likely to get transit incentives from their employers. Some large employers offer discounted transit passes or pre tax benefits to use for transit, and all those things encourage the use of alternate modes [of transportation]. But that tends to be at the bigger companies with more office workers, and not at the lower end of the pay scale.”

This is especially the case for people who have long commutes, like Szebert.

“Ubers every month are costing me about $200 or more, and the train itself costs about $200,” Szebert says.

Joe Baker, another postdoctoral student at Stanford, expresses his thanks for the fact that his position comes with free access to a useful form of public transportation, namely CalTrain.

“Now that postdocs get CalTrain pass-es for free, it’s a huge deal and essentially allows us to commute for free,” Baker says.

To bridge the gap between the haves and have-nots of transit, a non-profit called the Palo Alto Transportation Management Association has launched programs to increase access to public transportation.

“They [the TMA] are trying to design incentives and programs that will help those workers get onto transit, ” Gitelman says. “If we could offer the same kind of incentives to service workers … and shift more of them onto transit, it would … reduce traffic and hopefully provide a good alternative to what those workers are doing now.”

To make mass transit universal, Kahrson suggests that society as a whole should reconceptualize public transportation.

“We should reassert our understanding of public transportation [to become] the primary source of transportation,” Kahrson says. “Building towards that ideology … and then creating a better infrastructure would be awesome.”