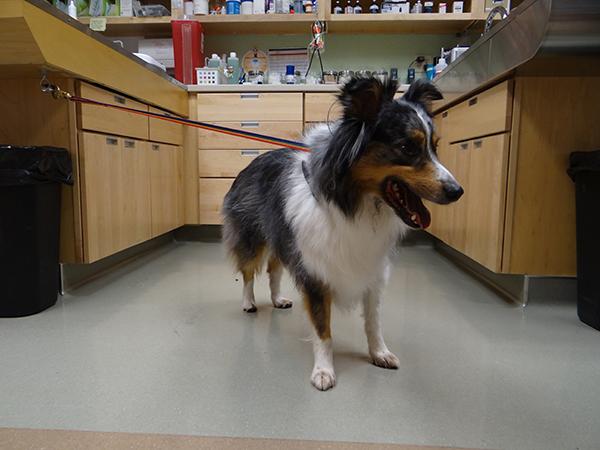 Mocha, a miniature Australian shepherd, was brought into the clinic for chocolate toxicity ingestion. After treatment, she rests between the examination tables, waiting to be cleared for release.

Yoshi the Siamese cat sits calmly within his carrier, blinking his large brown eyes. This is the first time he’s seen his owner in several days, and Yoshi looks up at him with curiosity as if unused to the sight. Black mesh blocks a clear view of his “dad,” so he pokes his head through the top of the bag. A newly placed IV tube pokes out of the side pocket, tucked in after an instructive demonstration on its usage. Yoshi’s eyes travel back and forth between the doctor and his owner, their hands simultaneously brushing his fur as they discuss the details of the cat’s discharge from the clinic. Yoshi closes his eyes in a moment of feline contentedness.

Yoshi has chronic renal failure — he has lost some function in his kidneys. For the past few nights, he has resided in and received treatments from the South Peninsula Emergency Veterinary Clinic. He’s going home now, but he will have to continue to receive treatment in the form of IV fluids for the next several weeks and will most likely receive some form of treatment for the rest of his life. It is unlikely he will ever fully recover due to his old age.

We observed these processes and daily ups and downs that the team and animals go through at the South Peninsula Emergency Veterinary Clinic on 3045 Middlefield Rd., where cases can consist of everything from trauma, such as injuries sustained due to a car crash, to illnesses, such as kidney disease. The emergency clinic helps patients who have problems that require immediate medical attention during hours when their regular veterinarian is not available (6 p.m. to 8 a.m. on weekdays, and all weekends and holidays). For time-sensitive cases, this service is critical: conditions such as toxicity ingestion or urinary obstructions in male cats can be lethal within a matter of hours.

It is 9:15 a.m., right after the start of the 8 a.m. to 6 p.m. shift of another long day at the clinic. For the moment, the clinic remains quiet on a balmy Sunday morning in January as veterinarians prepare themselves for the unknown future cases.

“It’s exciting working in an emergency clinic,” says Bonnie Yoffe, a general practitioner for 30 years and a relief vet who fills in for other veterinarians at the clinic. “You feel really good knowing you can help people, even if helping them is to make the decision to put [the animals] to sleep … But otherwise, [you’re] saving a life because either the animal was traumatized, or fell out of a second story window, or hit by a car.”

At 9:40 a.m., the waiting room is quiet. Soon after, Betty and John Basile, an elderly pair, walk in through the door with Betty carrying an animal carrier that softly but consistently meows. They walk up to the front desk to check-in their pet: Kitty Kitty, a black, short-haired female cat around 2-years-old.

They are led into an examination room with Kitty Kitty, who is given a physical by Larry Young, a veterinary technician. His hands travel from her ears to her tail, feeling the cat’s curves and bumps. Kitty Kitty attempts to bolt a few times, unused to a stranger’s hands, but Young holds on gently but firmly.

He measures her heartbeat with a stethoscope, and then he puts her on a small white scale to weigh her. After this preliminary assessment, Kitty Kitty is checked by Yoffe. Using a “head-to-tail” technique to ensure a comprehensive examination, Yoffe gently squeezes the cat as she runs her hands down Kitty Kitty’s body, pausing at the cat’s bladder and noting that it is empty. She goes down further to feel the cat’s kidneys in her hands.

Yoffe turns her attention to Betty and John. She suspects that the cat has a bladder infection and prescribes antibiotics, instructing Betty and John on the proper way to administer them.

Cases like this are fairly standard for the clinic. Betty and John have been coming here for all of their pet needs, as they have a variety of animals including dogs, cats and fish.

“We had no where else to take them,” Betty says. “What I like about them [the clinic] — they’re not cheap, but they’re honest.”

The price of medical care, which can range from $95 to several thousand dollars, can be an obstacle to treatment. Young has confronted this problem several times.

“[It’s a] very positive … experience [when] sending them [clients] home they have a smile on their face, hence we have a smile on our face,” Young says. “But [when] … the owners want something done — they came here for a reason, and they’re hoping that we can provide relief, but they simply can’t afford it and they don’t know what to do … We pretty much run this business with our heart, but [it] … has to survive.”

For a short while, the clinic is once again silent — but this is the calm before the storm. Another phone call comes in warning about a dog’s suspected chocolate ingestion. This enables the vets to begin preparation for the procedure and to find the necessary tools ahead of time.

The bell chimes, announcing the arrival of more patients: a plump cat named Sky with a sensitive left hind leg and a dog with chocolate poisoning.

The dog, Mocha, a miniature Australian shepherd, is soon placed between the two examinations tables. It is around 10:50 a.m. Fastened to a hook near the bottom of the left examination table, Mocha’s rainbow leash matches the assortment of colorful, empty chocolate wrappers in a Ziploc bag of evidence. There is also a cardboard ingredients label noting the chocolate content, which Yoffe notes was very dark. Darker chocolate is more toxic.

Mocha shakes, in part from fear of a foreign place and in part from the caffeinated chocolate. Her hind legs quiver, moving so fast that they seem to vibrate. Her eyes, one blue and one brown,  follow the technicians around the room as they arrange the tools necessary to treat her.

Meanwhile, Sky lies on her right side on the examination table, hindlegs held close to her body while veterinary technician Karen Flewelling holds her head and Young examines her posterior. After an inspection, Young prepares to administer an X-ray on Sky, donning a protective layer before taking the cat into the X-ray room. 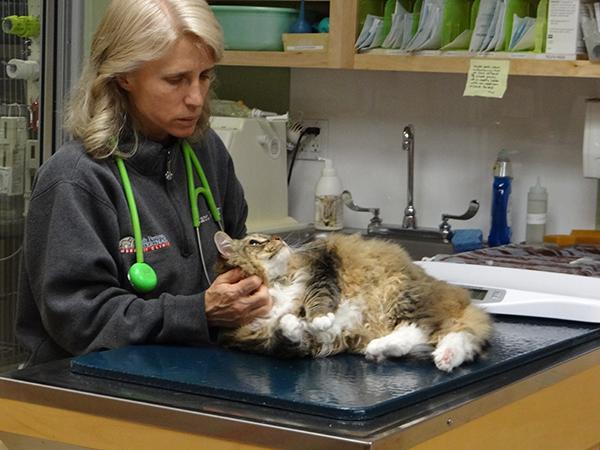 Sky the cat looks up at Flewelling after her examination.

Habershon and Flewelling inject her with more apomorphine to increase the dosage and try once again to expel the chocolate from Mocha’s body. This time, drool dribbles out of her mouth before Mocha jerks her head forward, convulsing, until in one fluid motion she empties the contents of her stomach into the sterile basin. Then again. And again.

When she is finished, she looks up at the technicians with her eyebrows pressed together, a mixture of shame and discontent on her face. They remove the basin, now filled with a sizable amount of half digested chocolate, and Mocha begins once again to shift restlessly, a nervous energy still coursing through her. When the door to the waiting area opens, her ears perk up and she tilts her head side to side, listening intently for a familiar voice. As vets pass, Mocha receives an occasional pat and encouraging word. She accepts them gladly, panting heavily after her ordeal. 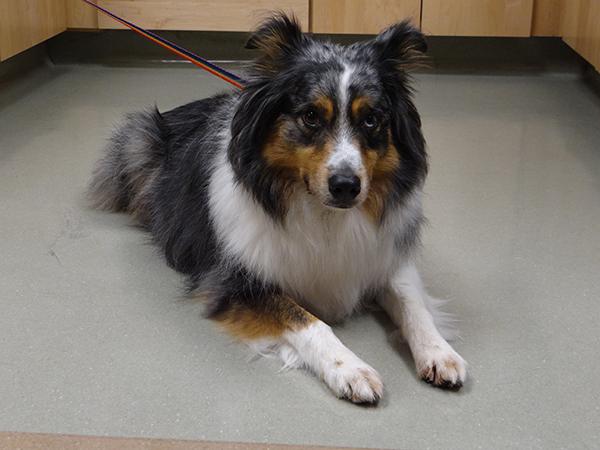 Mocha the dog rests after Flewelling and Habershon treat her for chocolate ingestion.

Yoffe jokes about the fragrant chocolate aroma that now fills the room as she takes the basin to show Mocha’s owner. After being fed several syringes worth of ToxiBan, a black goop that will help post-toxin ingestion recovery, Mocha is free to go, discharged about an hour after her admittance.

In the X-ray room, Flewelling looks at the X-ray of Sky and points out injuries that could be an indication of arthritis, a condition accelerated by her obesity. They hypothesize that Sky had fallen off of a piece of furniture, and the impact normally sustainable by a healthy cat was too much for Sky. 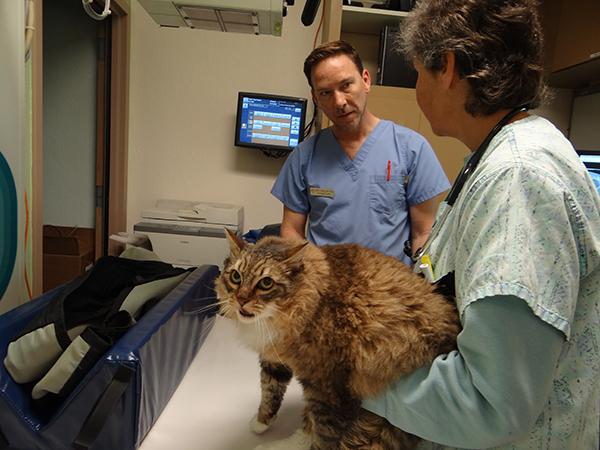 Young and Yoffe dicuss the results of Sky’s X-rays.

The clinic receives plenty of cases such as Sky’s and Mocha’s, but also receives a number of more serious cases that require drastic action. One possible move, euthanasia, is a crucial and sad part of working at the South Peninsula Clinic.

This aspect of the clinic often evokes an emotional response from both doctor and owner.

“One of the hardest things of my job is to do euthanizations because even though you don’t know the patient or even the person … it’s still hard, and after doing it for as long as I have, I’m still very compassionate about it, and I guess if I didn’t then … I wouldn’t be in this field anymore,” Habershon says.

For Flewelling, the saddest cases are those that no amount of work can salvage.

“[When] you work very hard on them [the animals], and they get to a plateau,  … and then they just drop,” Flewelling says. “Those are the ones that upset me the most because we put in all that work and then the animal — they just give up. You see it in their face.”

Though some cases are irretrievable, miracles can happen.

“It’s euphoric when you have an animal that really is critical and you’re not sure  … if they’re going to make it no matter what you do, and you’re able to save them,” Yoffe says. “That’s a real high.”

At 12:48 p.m., the examination room is once again empty. Habershon munches on chips. The technicians note the smell of something burning in the air, and Larry briskly walks in to rescue his slightly burnt toast. The team relaxes in the quiet lull before the next wave.