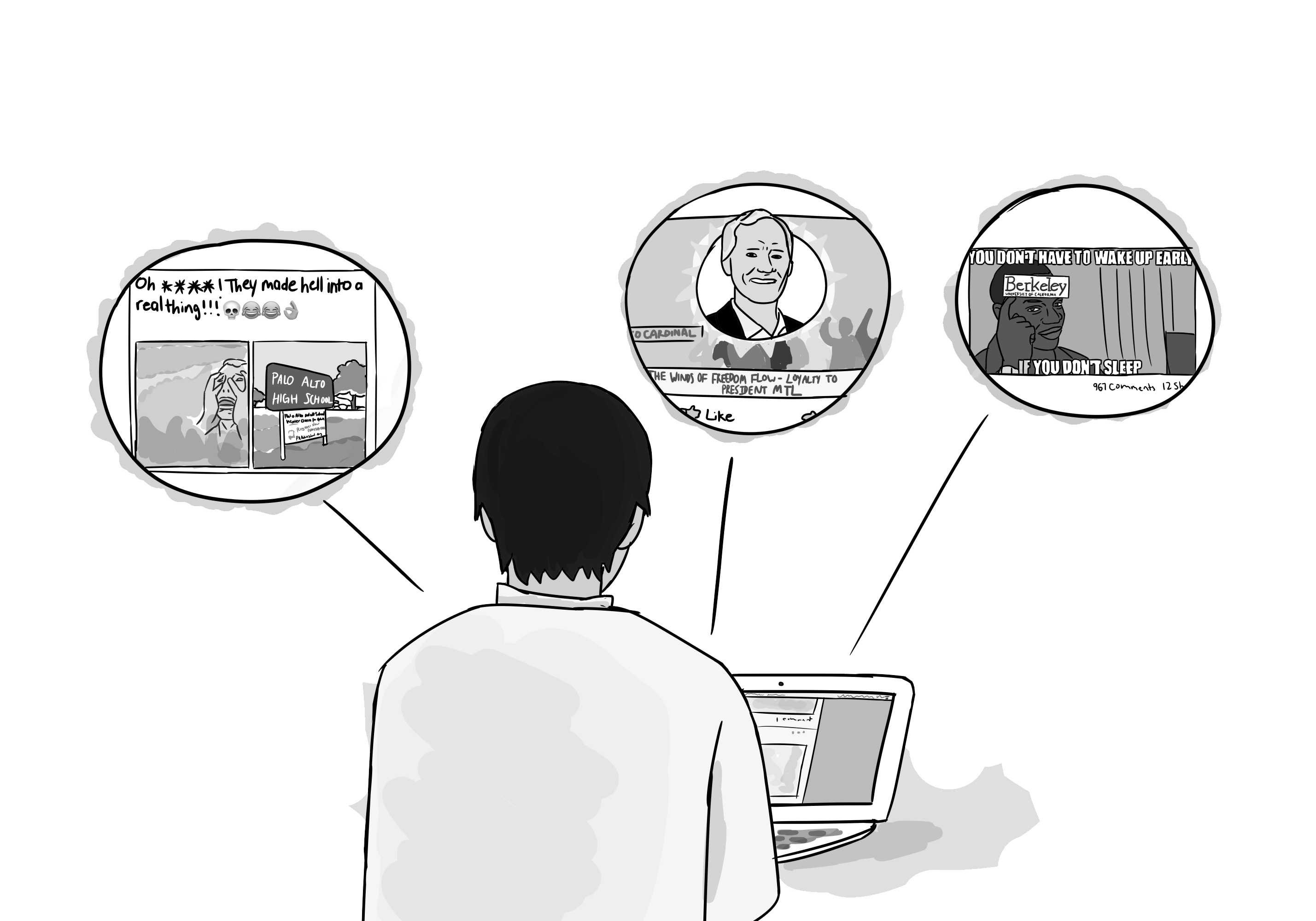 What do you meme?

According to all known laws of meme-making, there is no way a meme should be able to go viral. Its followers are too hidden behind screens to spread its ridiculous content across the Internet. The memes, of course, spread anyway.

Between 2009 and 2011, a group of researchers from Facebook, the University of Michigan and the Genome Institute of Singapore identified 4,000 memes that were copied and posted on Facebook that over a period of three years, demonstrating the connective and unifying effects on the Internet.

The word “meme” was coined by ethologist and Oxford professor Richard Dawkins in his book “The Selfish Gene” in 1976. He derived it from the Greek word “mimeme” meaning imitate, using it to describe the rapid spreading of information.

However, the word has changed over the years and has now come mean an image, video or set of text that spreads rapidly, specifically on social media according to Urban Dictionary.

Y u no study in college? Memes!

If you were to look at the Facebook feed of students from Palo Alto High School, chances are you’ll see posts from at least one meme page. Since 2016, school-specific meme pages have emerged for countless institutions across the country, with membership reaching up to 130,000 in UC Berkeley’s meme page, “UC Berkeley Memes for Edgy Teens.”

UCBMFET was created by Berkeley student Chris Tril in May 2015 as a way to share memes among like-humored friends, Tril says. After holding a candlelight vigil for Harambe — a gorilla  who posthumously became the subject of a viral meme — the page started growing rapidly, attracting members beyond Berkeley’s student body. These non-students began posting frequently, and soon, Tril says, it started to feel like his vision for a meme-page for and by Berkeley students to share original content came crashing down.

By December of 2016, Tril had come to regret ever creating UCBMFET. Debates and comment wars flared up on nearly every “edgy” or original meme that was posted on the page, and Tril would often get emails and messages from various student groups or professors asking him to take down what he calls “nihilistic” content. Around this time, Tril was also facing outrage from members of the page who felt that the censoring policy he and his team of admins and moderators were enforcing was too strict.

“They would complain about our strict moderation, but then they also complained about the poor quality or unoriginality of the memes.”

“They would complain about our strict moderation, but then they also complained about the poor quality or unoriginality of the memes,” Tril says.

Tril and his team of moderators tripled the ban rate of posts and blocked all new join requests, but the page never returned to its former glory. Tril gained a reputation for extreme censorship, and following a series of conflicts between him, his team of moderators and the members of UCBMFET, he resigned as the admin of the page.

“It became glorified babysitting, and it was honestly a relief to leave the page,” Tril says.

Tril admits that running the most followed collegiate meme page on Facebook had its advantages, but, he has come to a single conclusion:

Despite Tril’s regrets, however, the trend of meme pages continued to spread to schools around the country. Following suit, Stanford sophomore Robel Daniel created Stanford Memes for Edgy Trees in November 2016.

“Meme pages were kind of catching on and Stanford didn’t have one yet, so I just decided to make one,” Daniel says.

SMFET has since grown significantly in size and is followed by much of Stanford’s undergraduate student body, according to Daniel. For stressed-out students at one of the most elite institutions in the world, scrolling through or posting relatable and funny memes is an ideal way to wind down and distract themselves, Daniel says.

Like many other school meme pages, Daniel and his moderators require all content to have some kind of Stanford-specific relevance, but the page is not limited to just Stanford students.

“We have about 14,000 members currently and there are only around 7,000 undergraduate student sat Stanford,” Daniel says.

Having open membership and allowing anyone to post content, however, is not without its own challenges. Much like Tril, hDaniel periodically encounters problematic or offensive content on his meme page, and says that these postsare almost always posted by non-Stanford students or “trolls.” “Trolls,” as defined by the Merriam-Webster Dictionary, are people who make “deliberately provocative or offensive online posts.”

Nevertheless, Daniel tries not to be oppressive, censoring posts and comments as sparingly as possible.

“If you post something racist, homophobic, or specifically targeting a person or a group, then it gets taken down and you get banned.“

“If you post something racist, homophobic, or specifically targeting a person or a group, then it gets taken down and you get banned,” Daniel says.

Beyond these basic conditions, he says, comes to a grey area. Recently, Stanford has faced a number of high-profile sexual assault incidents, and most of the more controversial posts on Stanford Memes for Edgy Trees have been related to these cases. While these memes often offend some members of the group and occasionally cause comment wars, Daniel leaves almost all of the content untouched.

“Humor is subjective, and it’s not my job to judge what is funny or not,” he says. 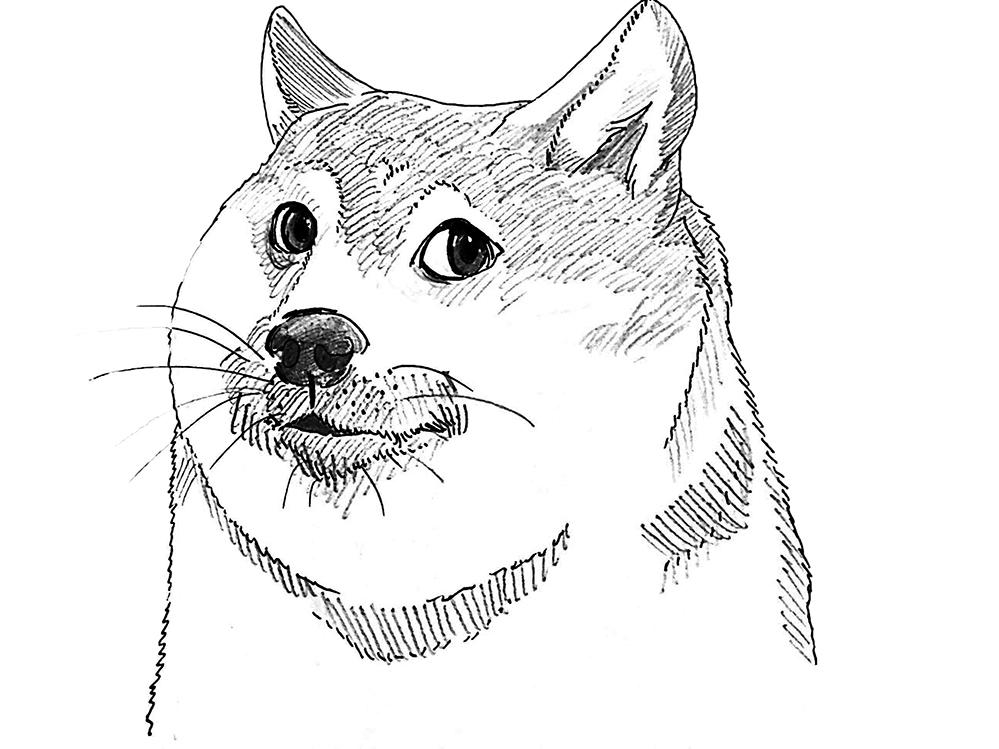 As collegiate meme pages spread across the nation, many high schools have jumped on board, including Paly. Paly senior Cooper Kim created Paly’s own meme page, Paly Memes for the Dank Youth, in April 2017.

“I saw that meme pages were kind of blowing up and I saw that a lot of schools had them, so I just decided to make one,” Kim says.

As with most meme pages, Kim and his team of admins enforce a set of rules for content posted in the group. This includes a requirement for all memes to be Paly related, with common themes being making fun of teachers, administration, fire alarms, and Gunn High School.

“All the memes have to have a Paly relevance, so you’ll see a lot of [Kim Diorio] memes and memes about Reese,” Kim says.

Despite rules set by Kim and his admins, offensive memes pop up periodically on the page, often making fun of various sexual assault controversies, such as the 2016 incident regarding Paly science teacher Ronnie Farrell, as well as the scandal involving a Paly student that shook the campus at the end of the 2016-2017 school year.

“We have to take memes like that down, and I definitely think they’re inappropriate,” Kim says, “but I guess with humor you have to make fun of everything; that’s just meme culture.”

The decision to rescind the students caused outrage among many who felt that Harvard was encroaching on the students’ rights to free speech. Cam, a current sophomore at Harvard whose name has been changed to protect his privacy, felt that, while the memes were certainly offensive, administration did not handle the situation well.

“I saw the memes and, of course, I thought they were really horrible, but a lot of people make jokes like that and I don’t think that the administration should be allowed to determine what we joke about,” he says.

“I saw the memes and, of course, I thought they were really horrible, but a lot of people make jokes like that and I don’t think that the administration should be allowed to determine what we joke about.”

What does it all meme?

One of the most unique things about Facebook meme pages is that, unlike other popular platforms for sharing memes, members and contributors are actively tying their names and profiles to their posts, and sharing them with thousands of people, ranging from close friends to complete strangers. The startling lack of anonymity is entirely contradictory to the origins of meme culture. Since the introduction of the concept, the sharing and posting of memes has been impersonal.

On popular meme-sharing sites like 4chan, Reddit and Tumblr the identities of posters and commenters are hidden behind vague usernames or serial numbers; there is no archive of data to which it is possible to reference.

Over time, the distinction that emerged between an “online self” and a “real self” has become increasingly apparent, and has introduced the notion that digital actions are somehow disembodied from the human being behind them.

“People seem to think that who they are online is different from who you really are,” Paly senior and co-admin of Paly Memes for the Dank Youth, Reza Safarnavadeh, says, “But I think it’s really important to remember that social media is not separate from you as a person.”   v