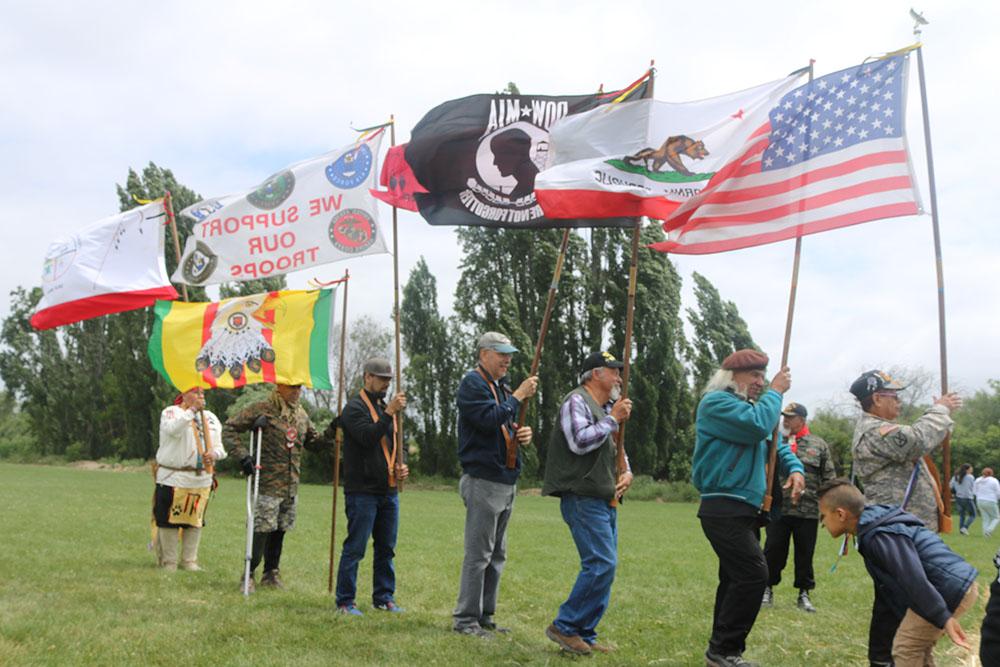 We Still Exist: Native American Students On Culture and Change

In a classroom at Ohlone Elementary School, the teacher stood in front of the class and asked students about what Native Americans liked — what types of food did they enjoy and what did they like to do? From the back of the room, one Native American student, sister to Paly student Masa Perez, raised her hand with excitement. When called on, she blurted out “pizza and soccer”, as that was what she liked. In response, the teacher kicked her out of the classroom for being immature, and the child sat on the bench confused.  She was  Native American, and she enjoyed eating pizza and playing soccer, so where had she gone wrong?

Perez, one of the few Native Americans at Palo Alto High School, thinks back to her sister’s story of the hurtful exchange which occured in second grade. All too often, Perez says she notices a sense of ignorance towards Native culture. 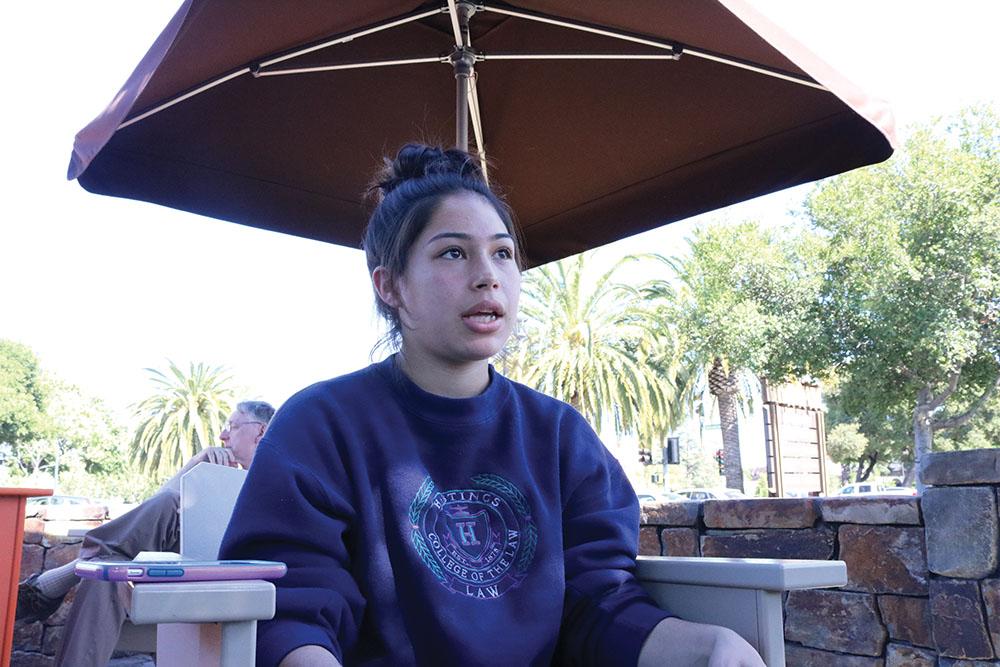 WE ARE HERE Masa Perez, a Paly sophomore, shares her experience as Native American student. “I think a lot of people are taught that we’re such a minority that we might not even exist — they talk about us like we’re extinct,” Perez says. Photo by Amira Garewal.

In reality, it was not the child who had done wrong — the interactions were a result of incorrect stereotypes about the Native people of this country said Perez.

During an elementary school simulation of the Gold Rush, Perez says she decided to dress up in Native attire and was met with hostility by her peers, who threw sticks and rocks at her.

“Of course it was just a simulation and we were just little kids, but that really stuck with me,” Perez says. “I was just really just surprised — to be so much into a simulation that you actually throw sticks and rocks at another human being. So I can only imagine how it was when my ancestors were living.” ­­

A unique transition: reservation to the Silicon Valley

Ty Wilcox is a Paly senior and member of the Navajo tribe. Before moving to Palo Alto, Wilcox lived on a Native American reservation in Arizona. With the nearest city over two hours away, Wilcox spent much of his early childhood in the woods with his grandparents, immersed in what he describes as the “Navajo way.”

“Don’t disrespect anything that Mother Nature has created,” Wilcox says in reference to the ideology that has shaped a strong part of his identity.

Growing up, Wilcox listened to stories from family members about the horrific conditions they experienced as the Catholic Church attempted to erase their Native culture during the 1960s. 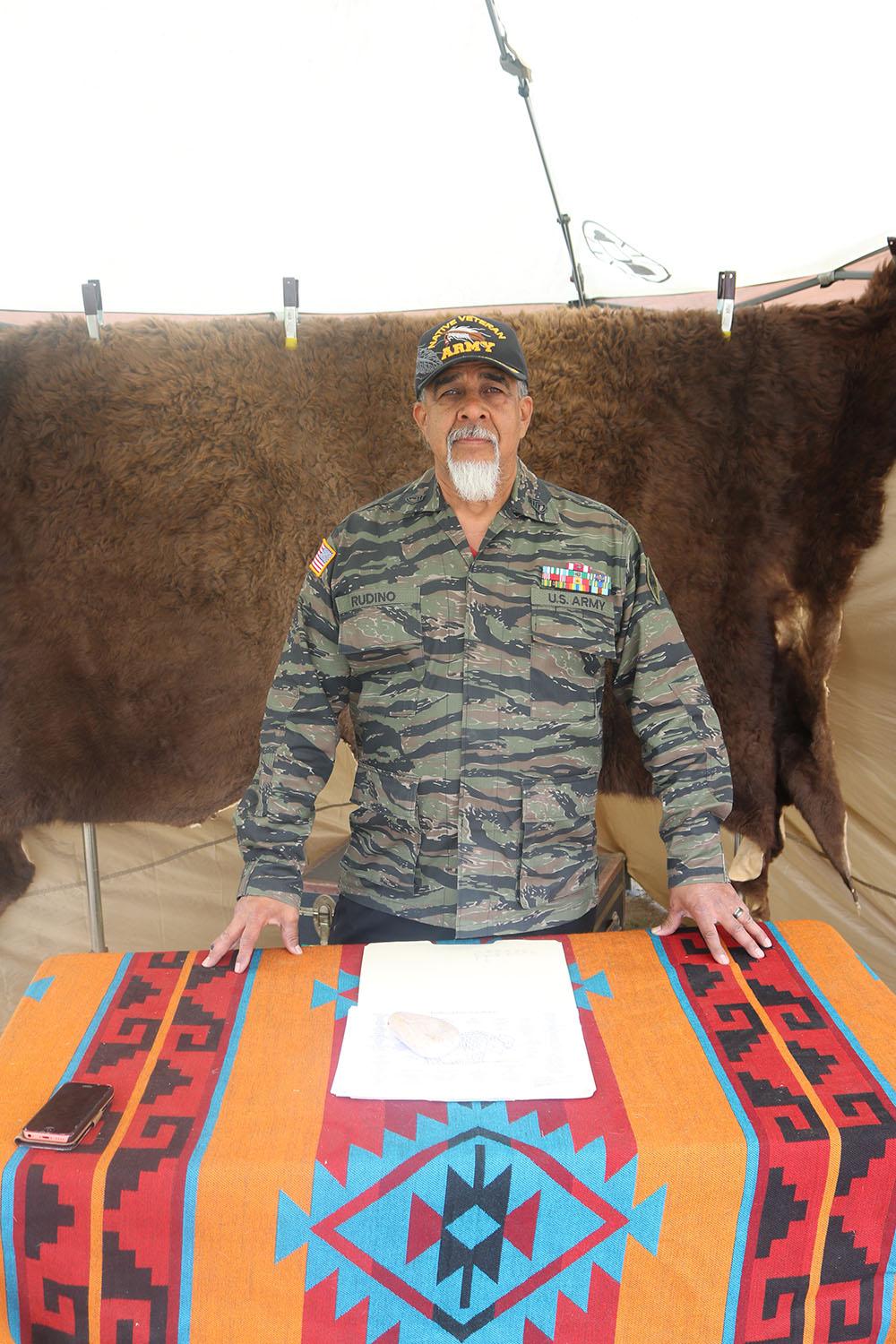 BUFFALO BONES Rudino stands in front of a buffalo skin held up on a line by wooden clamps. He explains how the every single part of the buffalo was once used by Native Americans. Photo by Asia Gardias.

“They [white people] were trying to wash away all our religion, all our stories, wash away our language,” Wilcox says. “The churches would go to the reservation, and take kids away from their families to take them to boarding schools. At the boarding schools they raped them, beat them, tortured them and didn’t feed them.”

Due to the immense amount of oppresion that Native Americans have been  subjected to thorughout the United States’ history, Wilcox feels strongly that local schools need to teach more about this discrmination in order to create a more informed and knowledgable public.

In particular, he emphasizes the need for more education about the oppression of Natives in the last century.

“The kids who made it through [the boarding schools] and went back to the reservation were so traumatized that all the could do was just drink to try not to think about what had happened to them as kids,” Wilcox says. “That plagued other generations, because the kids whose parents were in the boarding schools witnessed drug and alcohol abuse, so that’s what they know. It’s been passed down to generation after generation.”

Issues of substance abuse as well as poverty, are widespread across Native reservations. Government programs have not made significant progress towards improving the problem.

“They need to set up programs to get the kids involved in what the kids are actually interested in,” Wilcox says. On the reservation, Wilcox spent years playing basketball, a sport popular with Native kids and an outlet that relieved stress.

After moving to Palo Alto, Wilcox’s life shifted from being surrounded with Natives like him to finding himself in a school where Natives make up only a minority of the population. In a totally new environment, Wilcox found comfort in joining the Paly football team, a place where he finally felt at home again.

He played competitively on the team until 2016, when he had his third concussion and said he could no longer risk the consequences. Although he plans to go back to visit the reservation, he intends to go to college in the Bay Area.

“I’ve lost a family friend — he hanged himself,” Wilcox says. “I didn’t really know him. He was always gone when we did go around there but from what I heard he was going through a lot of hardship.”

Two significant problems that the community currently faces are a high teen suicide rate and an unsure future with the Trump Administration.

“Teen suicide rates have been up for the past four years and nobody knows why,” says Vernon Medicine Cloud, a medical professional who works with Native Americans, “It is increasing at an alarming rate.”

Agressive attempts to build the Dakota Access pipeline by the Trump administration have made Native Americans unsure of what future policies may bring.

A man with a white, rectangular beard and a hat reading ‘‘Native American Veteran’’ strokes a buffalo skin hanging on a line by wooden clamps. While drummers play a steady rhythm in the background, he explains the buffalo’s significance in Native American culture, going into detail about how every part was used. Today, Enrique Rudino stands proud as the chairman of thwe Fresno American Indian Health Project, department commander for AmVets, and most importantly, a Native American.

Growing up, Rudino says he had a difficult childhood, often helping his mother pick cotton while his father would get drunk. Later in life he developed an addiction to methamphetamine but was able to eventually overcome his illness, focusing his life on something new.

“Native American culture saved my life,” Rudino says. “I wanted to make a change so I embraced a culture. I am Apache.” 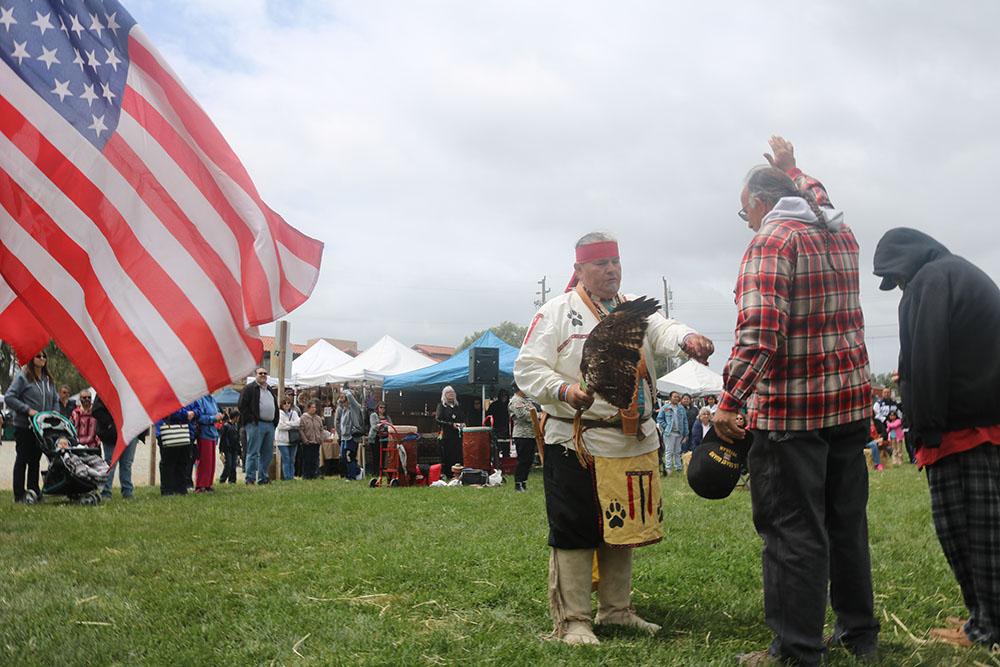 BLESSED Holding incense and the wing of a bird, a shaman blesses a Vietnam Veteran during the Indian American Festival Photo in San Bautista, CA. Photo by Asia Gardias.

Holding on to traditions

“My parents started to put me in the regalia [traditional clothing] and got me dancing around the age of four, and I think that’s built who I am today and got me so much more in touch with who I am spiritually and who I’d like to be,” Perez says. “I think that my Native culture is something that I hold very close to my heart and it’s the reason I can be so open and so calm at the same time.”

“I think that my Native culture is something that I hold very close to my heart and it’s the reason I can be so open and so calm at the same time.”

Although Native Americans live throughout the Bay Area, Wilcox sees a lack of education about Natives in the local curriculum and flawed attitudes.

He says that increasing this education is crucial to gain a better understanding of the Native community whose significant history is fading fast.

“There’s no way to learn about it unless you teach yourself — so teach yourself about the native population,” he says. “We still exist and we aren’t the stereotypes that you hear about.”   v