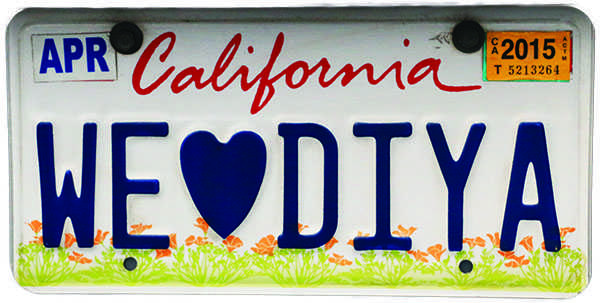 We Love Diya: On the road to success with Best Buddies

“We Love Diya” can mean a number of different things. In the plainest sense, it can describe the unwavering, unconditional love of a family toward their child. In another vein, it can refer to the whole community or “village” that has raised the child. And in a more expansive view, it can exhibit the slowly progressing nationwide acceptance and awareness of one of most prevalent disabilities today — Autism Spectrum Disorder.

At Palo Alto High School, one of the communities encircling people with ASD is the Best Buddies club. A chapter of the international Best Buddies organization, the club pairs students in the special education program like junior Diya Rao with other Paly students, known as the peer buddies. Peer buddies meet their buddies regularly on campus and also attend monthly events with them.

Diya’s peer buddy this school year, senior Olivia Vort, first became friends with Diya at Jordan Middle School, but the two continued to hang out at Paly. Vort says that being in Best Buddies not only means eating lunch together during bi-monthly club meetings, but also involves spending time together outside of school. Diya and Vort frequently walk their dogs together, go to movies, eat Chipotle or frozen yogurt and attend local Indian culture events.

“Oliva Vort is my best buddy this year,” Diya says. “She is an amazing friend because she keeps her word about having lunch when she has time for me and is very nice and takes all her time to spend with me during weekends.”

During one such lunchtime hangout, Diya and Vort cheerfully chat about Diya’s upcoming birthday, her new rain boots and their matching water bottles. Then Diya shows off her Bollywood dance moves, pounding the ground with her feet and clapping, all the while letting out little bursts of laughter as Vort smiles back reassuringly.

Best Buddies cultivates an environment where Diya cannot only spend time with people but where Paly students can also learn how to interact with those who have different abilities.

“Overall, I think it’s helped me become more patient and realize that this is who she is,” Vort says. “I’ve learned not to talk down to people who may be different from me … and to really learn to communicate with her at the same level that I would any of my friends.”

Throughout the evolution of their friendship, Vort has witnessed Diya growing more comfortable in social situations.

“She’ll walk across the quad now, come sit on the senior deck with me and eat lunch,” Vort says. “I can tell that she feels extremely included, and that makes me feel so happy inside to know that she feels she’s one of us. … I just think it’s so awesome that she’s come that far.” 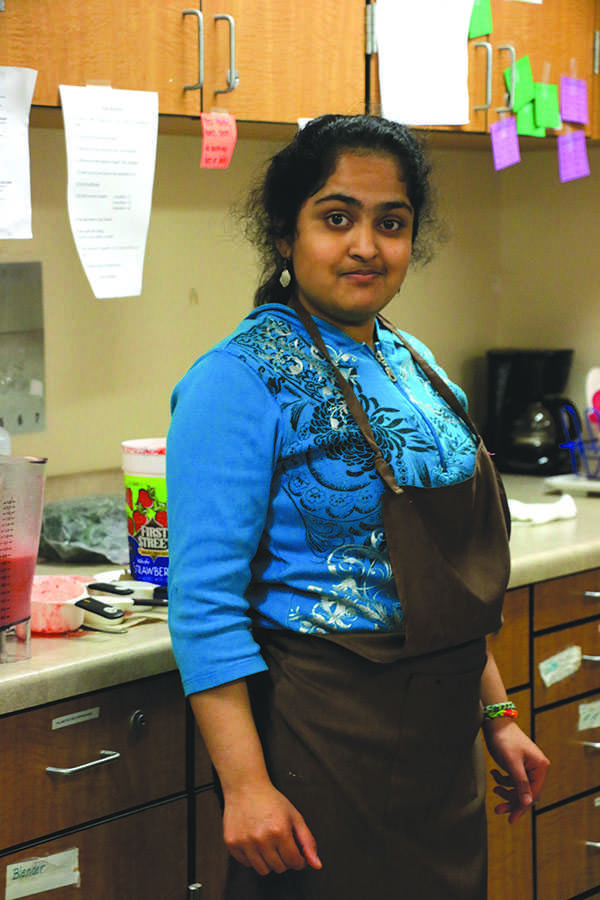 However, Diya has not always been as confident in social situations as she is today. She started life a little bit differently than most. Born 16 weeks premature and weighing only one pound in comparison to the average weight of eight, her life was a struggle even from the first moment. Instead of being released after a couple days, she was kept hospitalized for four months before she was finally deemed fit to go home.

“She was a trooper,” says Priya Rao, Diya’s mother. “She kind of shocked all the doctors because at every point we thought we were going to lose her.”

During the first year of her life, Diya struggled due to her delayed development. Although Priya did not know it at the time, Diya’s difficulties were the result of ASD.

At age five, Diya’s preschool days came to a close, and her parents were faced with the question of what was next for their daughter. Thinking that a private school would provide her with one-on-one attention in small classrooms, Priya enrolled her daughter at Carden Day School in San Jose. But in the mainstream environment of Carden, Diya often felt overwhelmed.

Her parents decided to enroll her at Charles Armstrong, a Belmont private school, which is primarily for kids with Developmental Delay (when a student does not meet the developmental milestones expected of them based on their age). Unfortunately, Diya’s learning problems did not go away, but rather continued to grow — she repeated the first grade, and when she finally reached fifth, the school told Priya that their services could no longer support Diya, and she was going to have to find another school. It was then that they again sought the input of doctors at Stanford.

“We went back for more testing, and that’s when they told us she was on the autism spectrum,” Priya says. “Socially she needed support, and she had slowly started to develop some anxiety issues.”

Diya’s social anxiety and difficulty with communication are common behaviors of ASD.

According to Janet Fox, a former Gunn High School special education teacher and a current lecturer for Notre Dame de Namur University’s special education credential program, each person may display different symptoms, but common characteristics among people with ASD are that they may struggle with picking up social cues and that they have difficulty interpreting language.

“There’s a malfunction in the brain that makes individuals with autism’s brains work differently than you and I,” Simpson says. “We don’t know exactly what that is yet, and how it manifests varies from person to person. It’s not anything that you can see or touch or take a blood test for. Some of our other developmental disabilities you can actually identify with a blood type or a chromosome, but we don’t know that yet with autism, so we identify that by a set of characteristics.”

It was because of Diya’s ASD diagnosis, her lack of social support and her anxiety that Priya decided to try public school so that Diya could finally get an Individualized Education Program.

Public schools are obligated to provide a free and appropriate education for all students, and an IEP is a legally binding, federally mandated education plan for individuals with disabilities. The teacher, psychologist, speech and language pathologist, behaviorist and parents form the team that discusses a plan that will suit the student’s education needs. The student, based on what the team believes she needs, will be given access to all that her school can provide. Private schools are not obligated to do this. 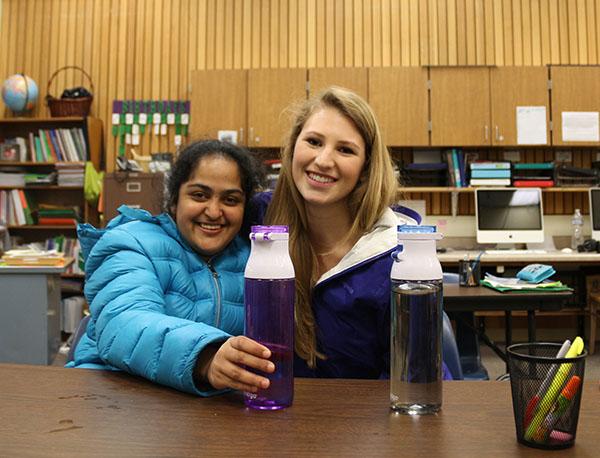 When they lived in San Jose, the Rao family had heard about the lack of available funding for special education in the San Jose Unified School District. As a result, they moved to Palo Alto, so Diya could enroll in the Palo Alto Unified School District, an event that marked a turning point in her life. Diya was finally receiving the support she needed from her teachers, her curriculum, her school and her community.

“Palo Alto School District was amazing,” Priya says. “They were able to actually see her strengths and integrate her into mainstream education like [physical education] and social studies and classes that interested her. It was a huge success.”

“She was slowly beginning to speak up,” Priya says. “Even though she was friendly, she was very, very shy — it would take you several meetings with her for her to even say one sentence, even though she had the vocabulary. She would just smile or giggle, and there’s only that much of smiling or giggling that people understand.”

With time, being in a secure classroom environment with support from teachers and aides who are trained in special education has helped Diya learn to speak for herself. Additionally, according to her mother, Diya’s anxiety levels have decreased.

At one time it seemed like there was little hope in Diya’s situation, but once she graduated from Jordan and started at Paly, she rose above her autism.

At Paly, Diya joined the PAUSD Futures Program where students are explicitly taught skills to help them integrate into the high school social environment, as well as professional and vocational skills to help them navigate the outside world. With the help of special education teacher Erika Magagna, Diya has begun to uncover the social, talkative personality beneath her “disability.”

Because people with ASD learn differently than people who develop typically, teachers may need to change their classroom teaching styles in order to best meet their students’ needs. For instance, students with ASD appreciate a predictable, structured schedule.

“I think knowing what to expect helps them feel comfortable [and] helps them just relax,” Magagna says. “The unknown can stress them out.”

For example, during their 4th period class, Magagna’s students run a smoothie business out of the kitchen in room 409. Working in pairs, they follow recipes to blend fresh fruit and vegetable smoothies, make hot chocolate and serve glasses of strawberry lemonade. When they personally deliver smoothies to students in specific classes, the money exchange allows them to practice their math skills in a way that could be applicable in the future. The students follow a schedule outlined on a bright orange pie chart. Seeing the plan in a visual manner with certain amounts of time allotted for the jobs of blending smoothies, bringing smoothies to classes and cleaning the kitchen provides a sense of security for the students.

Depending on the severity of their autism, some students can look forward to educational and vocational opportunities after high school. A small percentage will graduate and go to college, but the majority will move on to what is known as post-secondary. At the post-secondary level of the Futures program, students continue to identify their strengths and learn to transfer these abilities to their academic and vocational lives.

Post-secondary programs entail a combination of taking classes at community college and continued vocational training as students try out different job tasks that match their strengths.

As of right now Diya does not know what she wants to do when she leaves the sanctuary of classroom 409, as well as when she stops her regular lunch dates with Vort. What she does know is she will miss being a part of the Paly community, especially Best Buddies.

“Best Buddies will always be amazing for me,” Diya says.