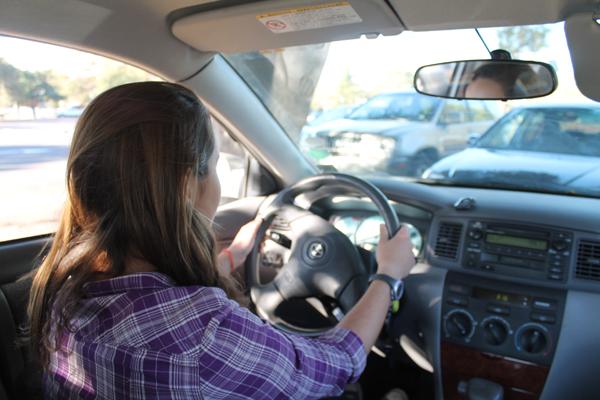 A Paly student looks out waiting to drive her car.

Many of us dream of the day we turn 16 because that is when we can finally drive.

Although many get their license that day, there is also a large portion of people who wait until they turn 18 to get their license because it makes sense for them. I am waiting because I can get everywhere by biking, I don’t want to deal with the hassles of the one year rule and I don’t have time to learn to drive.

This is the case for many other teens as well. Their time is taken up by school and extracurriculars, leaving little opportunity for learning to drive.

“I am going back and forth between Palo Alto and San Francisco, plus I have homework, so I don’t have much time to learn to drive,” junior Elijah Waxman says.

Extracurriculars are important to many Paly students. As a result, getting one’s license is pushed back because there is not enough time to do everything and driving is the last thing on one’s mind.

In Palo Alto, it is easy to get to most places by bike. Although biking may not be the most convenient mode of transportation, it will take you where you need to go. Palo Alto cyclists can bike on sidewalks and there are bike lanes almost everywhere around Palo Alto. There are even special bike paths that cars are not allowed to go on.

Even if I did get my license, I would not have a car to drive because my parents use their cars and don’t see the point in buying me a car.

For many teens, this is also the case. They feel that getting their licenses doesn’t make sense because they will rarely be able to use them. Having a car goes hand in hand with having your license because without one, you have essentially no use for your license.

It is also safer to get your license later. According to the California Department of Motor Vehicles, the traffic accident rates for 16- to 19-year-olds are higher than those for any other age group. Unsafe speeds and lack of skill contribute to these high rates.

According to the law, you can get your license immediately when you are 18. You don’t need to get a permit and instead can go straight to getting your license. This eliminates the 6-month wait period that teenagers face.

Getting your license at 18 also means that you don’t have to wait a year to drive minors. One of the reasons most teens want to get their licenses is so they can drive their friends. This gives them the freedom to go anywhere they want without having to rely on parents for rides. But the one year rule completely defeats this purpose for many teens.

“It (waiting) gives you more time to focus on the pressing matters in school and outside of school,” Waxman says.