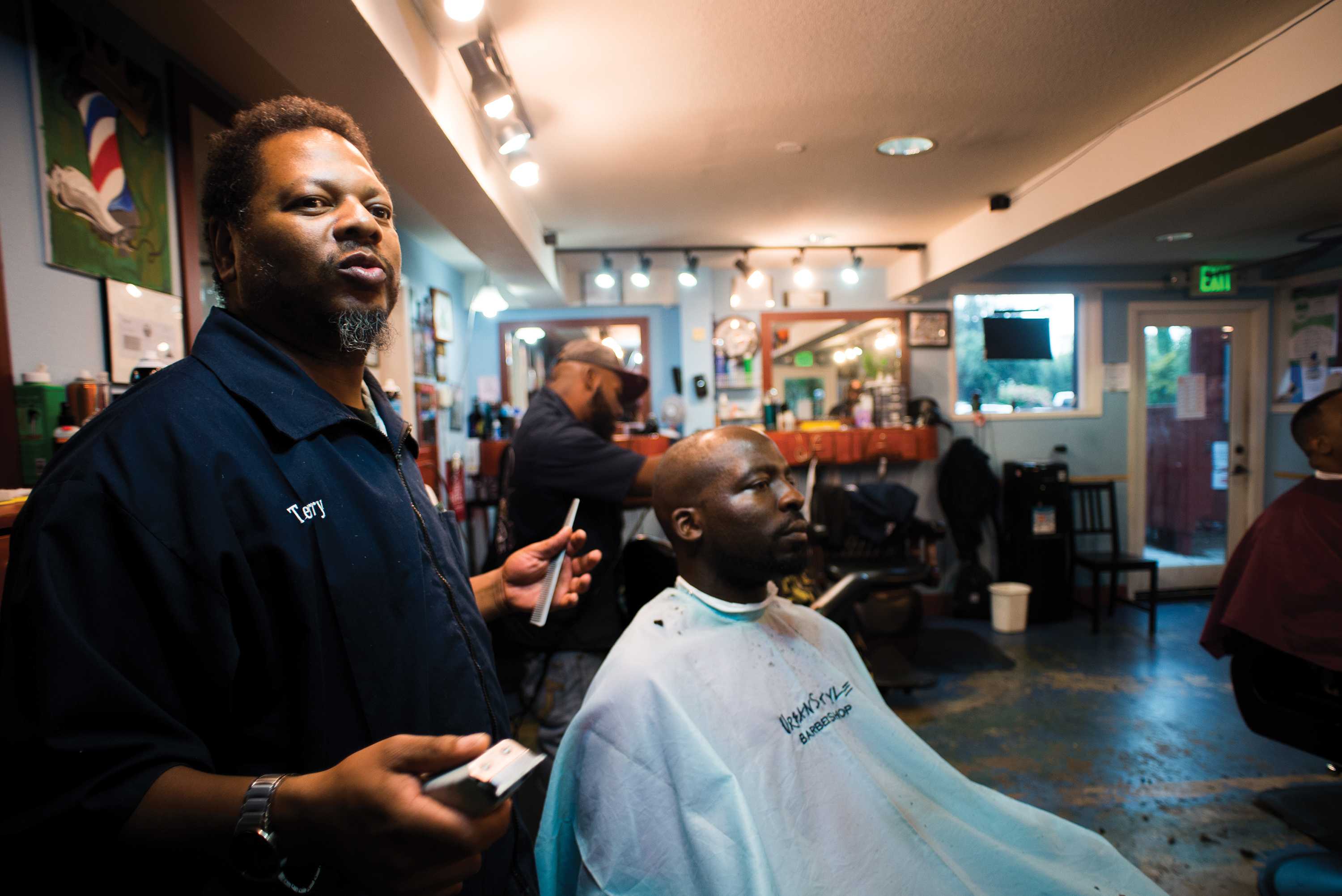 Terry Parks circles the chair, glancing up at the mirror, and then back at the man’s head, before lining the trimmer up with the tip of the man’s rugged goatee. As the commentator on the television behind him roars in a touchdown celebration, Parks’ trimmer continues to hum and  glide along the man’s jawline, quietly shaping a signature fade. Satisfied, the customer exits the chair and, after a hearty handshake, exits the small one-room building. This is where the jovial chuckle of barbers and charming buzz of razors mix — where the vintage barbershop meets the modern haircut.

Terry Parks, owner of Urban Styles, has come a long way since the days when he used to have his clients sit down in his own garage for their trims 20 years ago. And even now, with his garage long behind him, Parks has gone to great lengths to make his new headquarters maintain the feel of his self-described man-cave. NBA snapbacks line the rafters, civil rights and pop culture posters cover the walls, and while customers wait for their cuts, they’re welcome to sink into the couch and tune in to the Saturday afternoon football playing on the TV above.

“The memorabilia is something everyone can identify with. They can walk in here and feel comfortable right off the bat because they know something about sports. Even if it’s just Stanford,” Parks says.

But it’s more than just the setting that defines Urban Style’s trademark atmosphere. After all, no barbershop would be complete without the familiar cadence of conversation between cutter and customer — an atmosphere the barbers are more than happy to provide. In fact, talking with anyone who happens to drop in was a major factor in Parks’ decision to make a career out of cutting hair.

“You hear all about the stories. I tell my wife this is the place where guys go to tell lies. You can’t believe all the stories you hear, but you can enjoy it, you know?” – Terry Parks

Parks grew up in the 70s in Portland, Oregon, where the buzz cut was out and the afro was in. So when his mother forced him into getting his afro buzzed off by a barber at the local church, Parks decided it was time to buy a pair of clippers and take matters into his own hands.

“I figure if someone is gonna laugh at my haircut, it’s because I cut it myself,” he says, reminiscing on the experience that ignited his career.

Parks continued cutting hair during his time in the Marine Corps; it was there that cutting hair struck him as a full-time career possibility. After cutting his squadmates’ hair in the barracks, he worked his way through barber school, cutting hair on the side and building up his clientele on the way.

“I’m just glad someone was willing to get their haircut for $5,” Parks jokes, as he carefully runs the trimmer down a customer’s sideburns. 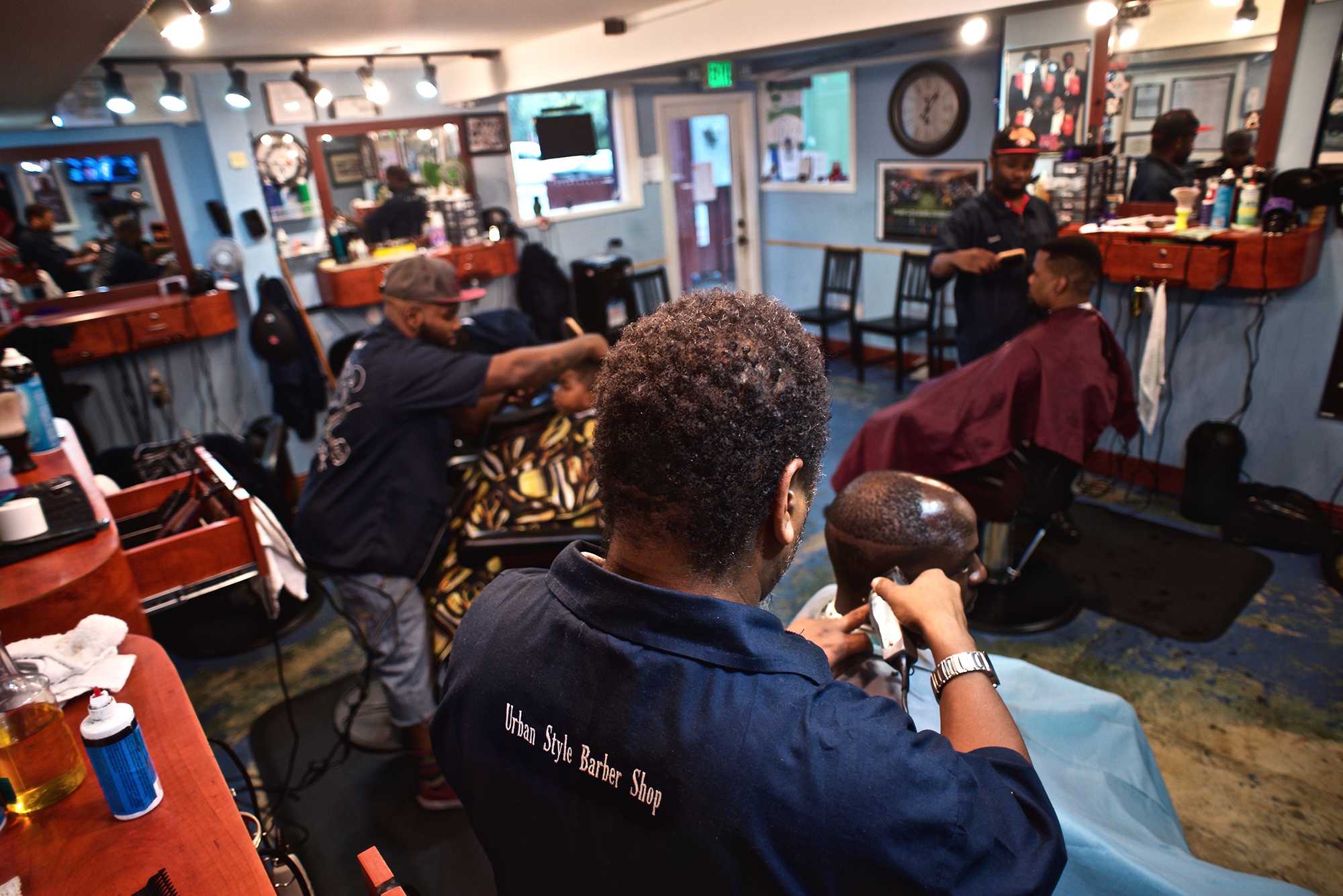 Terry Parks concentrates as he lines his trimmer up while doing a fade.

When Parks came down to the Bay Area, he was not keen on searching for a job, and saw an opportunity to open his own business. After visiting almost every barbershop in the Bay Area, he felt that they all had the same vibe.

“As a kid when you walk in there you think, ‘Man this dude’s just gonna buzz cut me,” Parks says.

With this in mind, Parks, and long-time friend and barber Curtis Barrs Walker, set out to be different — with an aim to cut whoever’s hair, however they like it cut. They dread the association barbers have with the scent of “a grandpa’s house,” emphasizing the need to preserve the charm of an old fashioned barber shop while at the same time incorporating a modern style.

Urban Style is more than just a well-decorated room. Just as the conversation between barber and customer has a distinct rhythm to it, the art of the cut has a similar ebb and flow, with each barber working with the customer to make each end result the best it can be. For Sedric Salinas, the youngest of the six barbers at Urban Style, this means treating each cut exactly the same, regardless of who the customer may be.

“I’ve always believed that you got to look good, to feel good, to do good,” Salinas says. When Steve Urbaniak, equipment manager for the San Francisco 49ers, came into the shop for a haircut, Salinas cut his hair with the same care and diligence that he has with every customer. Satisfied with his haircut, Urbaniak recommended Salinas to his players, and soon after, Salinas had a job at Levi’s Stadium, cutting hair for the likes of  offensive guard Daniel Kilgore and long snapper Kyle Wilson.

The relationship between customer and barber is an integral part of Urban Style — with customers ranging from taking their first steps to rolling in on wheelchairs, keeping a finger on the vibe of the store is essential. Parks believes that a barber’s technique extends beyond the magic they can work with the razor; they must also be able to build lasting, familiar relationships with their customers. Some customers come in with no real need for a haircut, simply wanting to catch up with their barbers, while others are engrossed in the book they bring with them, a signal that there isn’t a need for a conversation.

“You know, we’re almost like bartenders, but without the drinking, so it doesn’t get too crazy,” Parks says.

The variety of customers that walk through the doors of Urban Style keeps the barbers on their toes and ensures it’s always a positive experience for both barber and customer.

After a final glance at the mirror, Paly alumnus Jolo Wusu steps off the barber’s chair and barber and customer exchange a brotherly handshake.

“The vibe is always a roll of the dice, Wusu says, “but you know it will always be a good experience.” 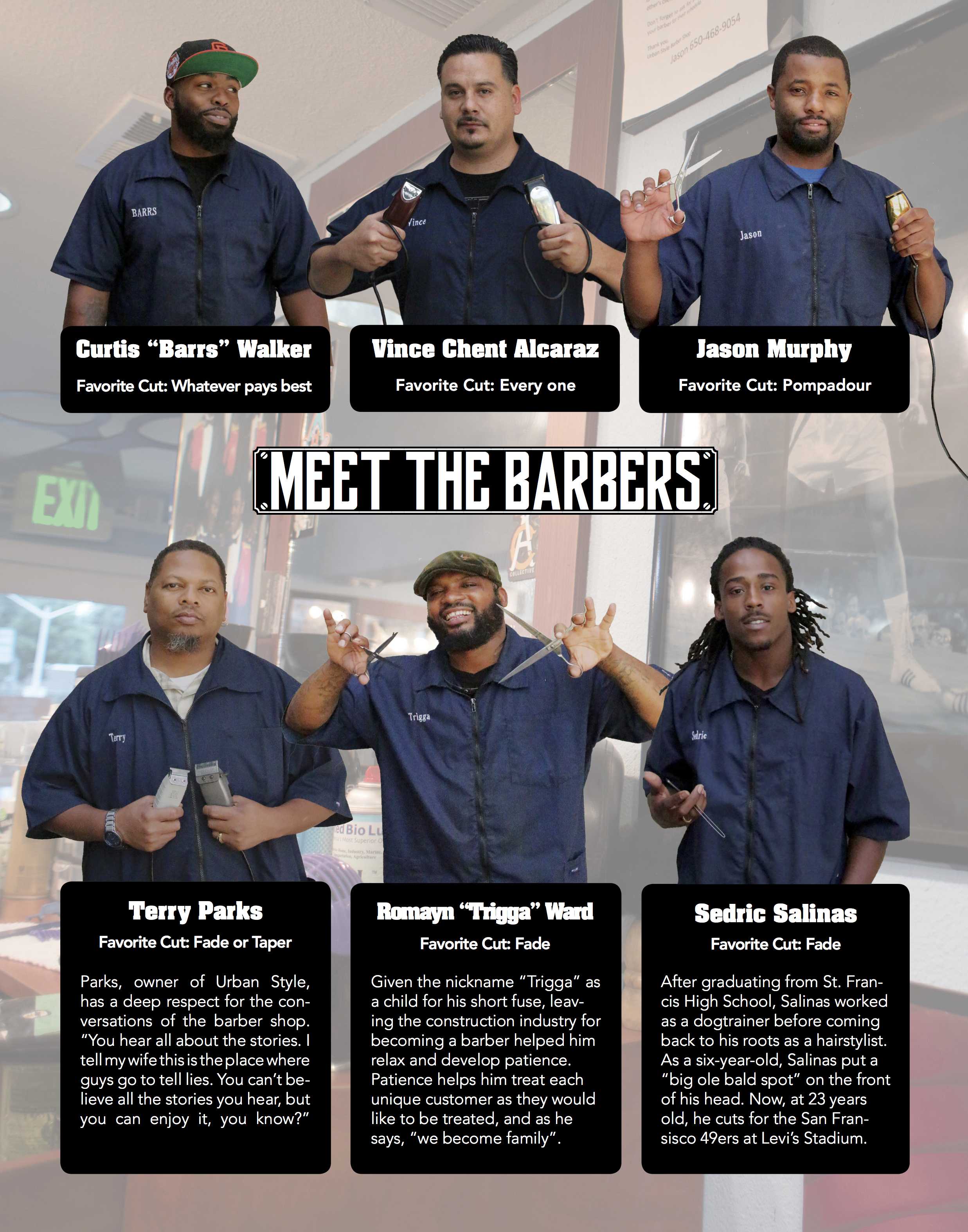