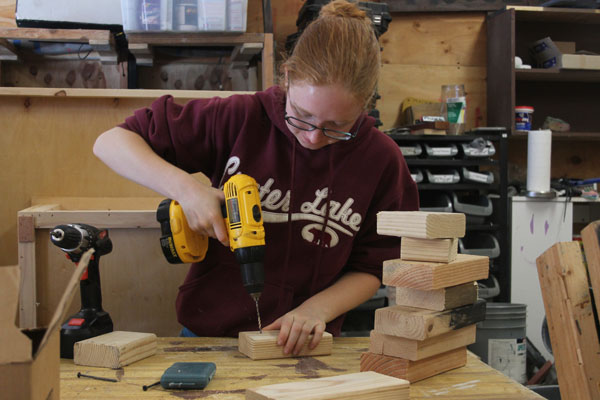 Each year at the start of spring, Palo Alto High School students are faced with the important decision of choosing their classes for the coming year.  Paly’s wide range of electives allows for much creatitivity in laying out a new schedule.  Aside from conventional courses, Paly offers a variety of unusual classes, including Foreign Policy, Stage Technology, Music Theory, American Sign Language and Multivariable Calculus. Here is a breakdown of a few unique courses students might not know about.

“I’ve always been really interested in history and politics, and since Foreign Policy is the combination of both it seemed like the perfect class to take,” Feinberg says.

“I love that we study current political issues, as opposed to other history classes, where the problem happened and was resolved hundreds of years ago,” Read says.  “It makes it easier to relate to the events and be more interested in the outcome, since they can affect us personally.”

Senior Elena Pinsker also enjoys the relevance of what she is learning.

“Unlike some other classes, I’ve never once questioned why we learn what we learn because it is directly applicable to what is happening in politics and what is in the news right now,” Pinsker says.

According to Pinsker, Read, and Feinberg, the workload for Foreign Policy is generally manageable, and for anyone interested in politics or history, it is a great class to take.

“It’s a very conversational-style class with a lot of talking back and forth, which I think is a really fun style of learning,” Pinsker says.

Stage Technology, an after-school elective held on Mondays in the theater, is supervised by Paly’s theater director, Kathleen Woods.  Students are only required to attend the class once a week for two hours, but they have the option droppping in and working in the theatre whenever it is open. Additionally, students can repeat this class every year.

Henry Wilen, a junior, has participated backstage in the Paly theater since his freshman year. Wilen works mostly in stage lighting and enjoys contributing to the shows.

“I really love the creative outlet it allows,” Wilen says. “I do a lot of light design, so I get to analyze the script for a show, come up with a series of looks in my head, and then work to realize the design.”

Junior Caroline Johnson says that Stage Tech has provided her with a way to express her creativity and socialize with others of similar interests.

“I found a productive outlet for my creativity in theater, and I found the people who do it to be rather agreeable with my personality,” Johnson says.

Stage Tech, according to Wilen, doesn’t often have graded assignments, and one can decide how much work they would like to put into the class.

“The workload completely depends on how involved you want to be,” Wilen says.

Johnson enjoys the sense of responsibility the class has to offer.

“I like how creative it is, and how self-motivated it is,” Johnson says. “You can work hard and go far, or just do it for passive fun.”

Wilen believes Stage Tech to be a great class for anyone interested in theater, art, design, or technology.

“It’s very fulfilling, and anybody who is vaguely technically minded would enjoy it,” Wilen says. “There is always something oddly therapeutic about taking out some power tools and reminding a piece of wood of its place in the world.”

AP Music Theory, taught by Michael Najar, is designed for students who have some experience in music and are interested in expanding their knowledge. This class focuses on topics including reading music, chord structure, ear training and harmonies.

Cayla Wanderman-Milne, a junior who plays clarinet in the Paly band, enjoys AP Music Theory. She mentions that an up-side of the class is that it doesn’t have a big workload.

“The class definitely just focuses on learning about and experiencing music, not being hard for the sake of being hard,” Wanderman-Milne says.

Wanderman-Milne notes that AP Music theory is a good class for anyone who is interested in music, especially those in band or choir. She says that the class is “absolutely worth taking.”

American Sign Language, or ASL, is a language course taught by Magdalena Rivera and offered as an alternative to auditory language classes at Paly.

Junior Sophia Howard, who has been taking ASL since her freshman year, can attest to the power of learning a new way to express oneself.

“I liked the idea of expressing words without using speech,” Howard says. “I also work outside of school with kids with special needs, and often times the kids have a hard time formulating words and ASL is a useful alternative for communication.”

According to Howard, ASL is a heavily interactive class. A classroom activity she enjoys that makes use of ASL’s opportunity for interaction involves choosing a song to sign.

“Everyone gets to pick a song to translate and then you sign your song to the class and try to keep to beat and use proper notation,” she explains.

Howard recommends ASL for anyone who is interested in acting or studying a non-spoken language.

“I think it is a great alternative to a spoken language and is worth trying,” Howard says. “I especially think that it is great for people who like to act or are in theater, because you are mostly acting during class. And you must use a lot of facial expressions in order to communicate the information.”

Multivariable Calculus, a new class added to the math department this year, serves as an on-campus option for students who have completed BC Calculus, the highest-level math class that Paly previously offered.  Taught by Judy Choy, Multivariable Calculus is held everyday during zero period, and is available for both Paly and Gunn students.

Junior Grace Lin, who took BC Calculus as a freshman, had to commute to Stanford for advanced math classes last year and is pleased with Paly’s decision to add a new course.

“I think it’s a great decision,” Lin says.  “It is easier for most students than commuting to Stanford.”

According to Lin, there were about 15 post-BC Calculus students involved in the Stanford math program last year, and this number has been expanding for the past few years.

“There were an increasing number of post-BC students, and before, they were able to either take AP Stats, take Stanford math, or community college classes,” Lin says. “But this year, there were enough students to open a post-BC class at Paly for Paly and Gunn students.”