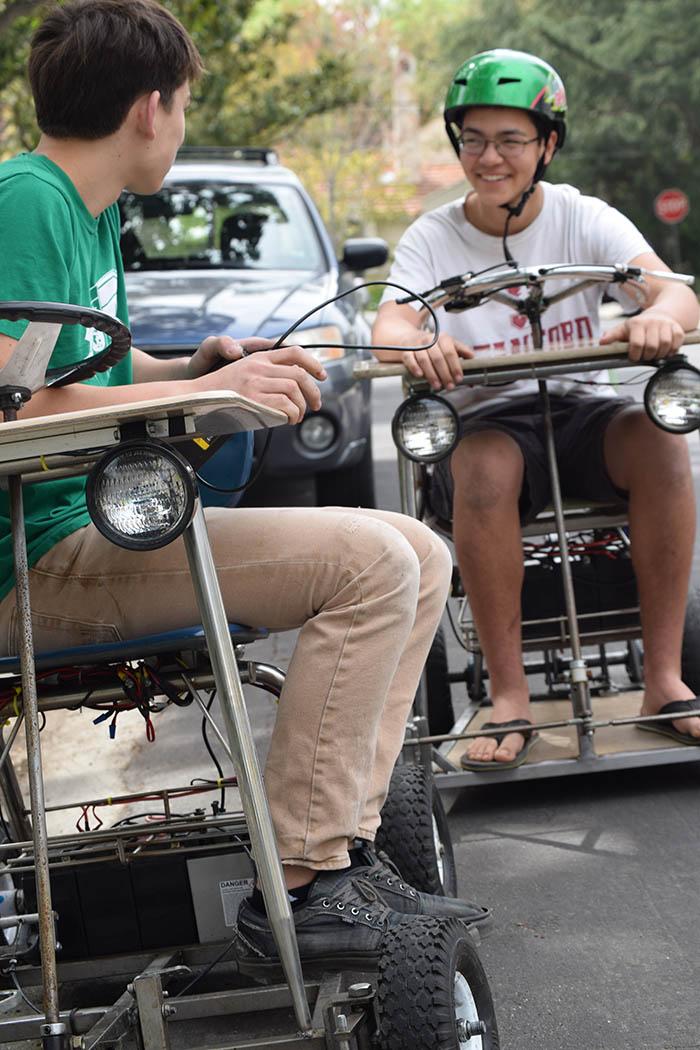 Turning the Tables: From Desk to Transport

Two students are hunched over in desks, their legs bent at bizarre angles in the cramped leg room — the sight is nothing new. Instead of being inside a classroom, however, they’re in the middle of a park path, with motors where a backpack should have been placed. Sophomore Peter Martin inserts his key into the first of his four switches in his desk — the only one which currently works. The lights have blown out, the horn broke, the third doesn’t connect to anything, but the ignition switch still starts the desk. After a wave to begin, Martin begins the race at a speed of 30 mph. His vehicle races over the grass and onto the concrete, harshly stopping at the finish line and sacrificing a bit of his tires, which erode at the brutal stop. Sophomore Nathan Kim, with his sweatshirt wrapped around his neck as to not get it caught in his motor, starts his engine, too, and races around the track of the local park. After reaching the finish line both are eager to know who was faster. Martin wins by three seconds but neither is surprised as both of them know the ins-and-outs of their motorized desks. Kim and Martin are known to Palo Alto High School as the “the kids with the driving desks” yet to each other as guys with a knack for building things. This year, they found themselves in Paly’s spotlight after they followed the Spirit Week sophomore float in their desks, which were dressed up as firetrucks to match the theme. 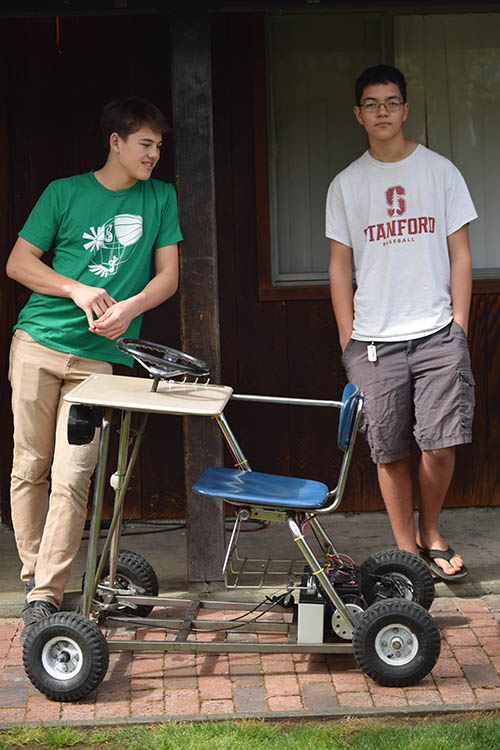 The first day Kim and Martin walked into their shared auto shop class, they were both overwhelmed. For a pair of boys on a high from their industrial tech classes as middle schoolers, being surrounded by car skeletons transcended their time in the shop from a class into an adventure. “The famous story? We go to our desks and we were super excited for class,” Kim says, “We were pretending to drive in our desks, and then, we were like, ‘what if we actually did this?’” “Most of it was his idea, I just piggybacked along for the ride,” Martin says. Once they had decided their project, they took it step-by-step, using the intellectual and physical tools passed down from their fathers. Martin’s father collected his tools working as a surgeon while Kim’s father’s tools came from building prototypes of sports equipment, creating an environment where the two were able to learn from an early age. The two settled down in Martin’s garage for the project which was a garage-turned-workspace fully equipped with machinery, a bathroom, a sink and a shower.

The Nuts and Bolts

The materials for the motorized desks were first purchased online, but the rest came from creative, out-of-the-box thinking. Kim and Martin would ‘dumpster dive’ to find cost-effective resources. “A lot of it [goods found in dumpsters] is broken, but every once in awhile you might find something that’s cool, that does work out sometimes. We got lucky this time,” Martin says, crediting the Stanford campus as the ideal place to find high quality once-loved electronics of engineering students. The colleges’ end-of-year waste makes up a large portion of their motorized desks, with the desks themselves coming from Paly’s very own dumpsters after getting the thumbs-up from the janitors. “Most of it [the desk] is just a small simple go-kart frame, with some generic electronics from an electric scooter,” Kim says. “We just modified the steering a bit and added a desk on top to complete the work.” 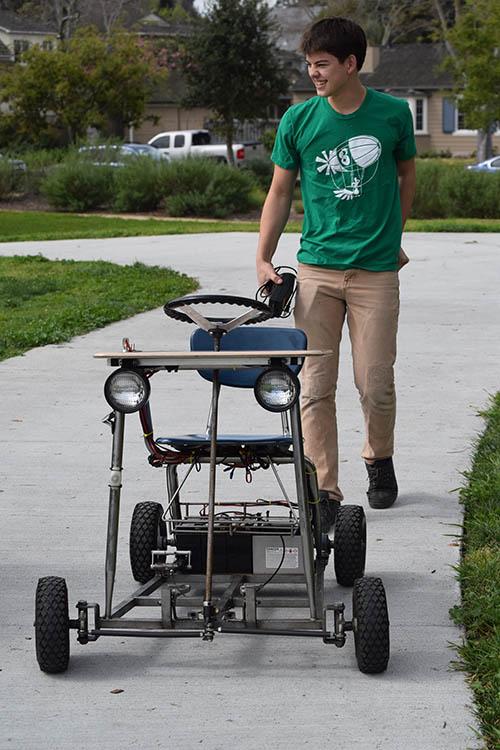 They set a goal to finish before the end of the school year so that on the last day, they could pridefully roll up onto campus. “Every weekend I was going over there [Martin’s garage] in the morning to work on the project, and finished like a week before the last day of school,” Kim says. Their personal dead-lines and hard work did pay off in the end, with their diligence being rewarded with a sweet ride.

Initially, the two thought their vehicles would come out to be identical. Through screw-ups, they quickly learned minor tweaks here-and-there would make each of them one of a kind. For Kim, working with a small desk base that left a tight space for steering was the cause for his headaches. While Martin’s desk was larger and able to accommodate foot pedals and a traditional round steering wheel, a glance at Kim’s reveals a semi-circle contraption wired with hand brakes. “I went through four or five iterations of the throttle-lever hook ups because the first few broke, and then I had issues with getting enough clearance where I could still turn but the lever wouldn’t hit the desks,” Kim says. A solution was found during a quick stop at his local bike shop, where Kim found a large metal hoop able to be repurposed as the steering wheel for his desk cart. “I used half [of the hoop] as the steering wheel,” Kim says. “It turned out to be the perfect diameter.”

Just Roll With It

Since having built the motorized desks, the pair has gotten many inquiries about when the cutting-edge, innovate piece of technology straight from Silicon Valley would come on the market. “I’ve had one guy come up to me and ask me how much I wanted for it,” says Martin, who’s enjoyed the attention, even cruising through a drive-thru at a nearby Jack-in-the-Box. “I’ve had other people whip out their phones and pull up Snapchat and record us driving down the street.” Any prospective buyers will have to wait for now, as Kim and Martin are not considering manufacturing desks for sale. 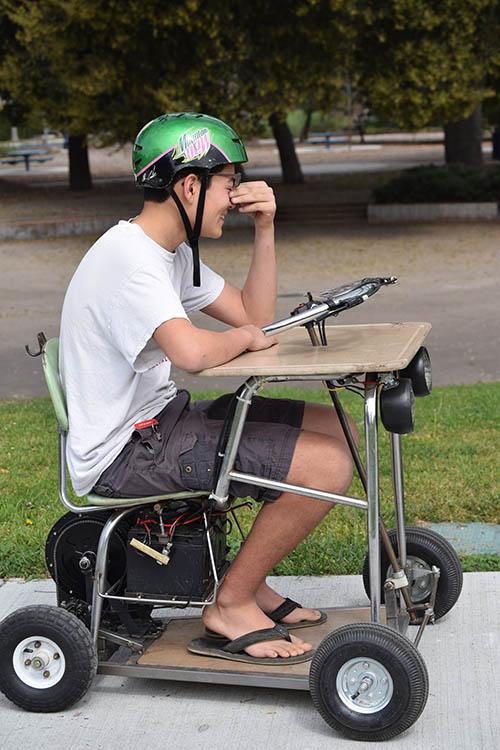 “It’s one-of-a-kind, so if you sell them, it takes away from the specialness,” Kim says. They are, however, willing to allow a few, select individuals to take the desks for a spin. “We want to give a shoutout to Mr. [Kevin] Duffy because he’s been talking us up in class and mentioning how his dream is to ride a desk go cart,” Kim says. “If Mr. Duffy would like to ride the go-carts, he is okay to.”

The two are unsatisfied with the current state of their desks and hope to always keep improving them. “The issue with the desks, like while it’s cool it’s not very practical because it’s wide,” Kim says, “It’s also electric so it has a fairly limited range, and you have to re-charge the batteries and it takes like 10 hours.” Kim and Martin envision a sleeker, faster, more upgraded version of the desks. Being engineers at heart, Kim and Martin already have another project in line — old-school motorcycles. “We wanted something that would be smaller,” Kim says about the motorcycles. “They will have a longer range, and be gas-powered so we wouldn’t have to be bothered about charging.” Martin grins at the mention of their future endeavors. “And they will look cooler,” Martin says. While others may seem flabbergasted by their inventions, the two have found their place creating fully, functioning vehicle from scratch. “It [the first time riding the desk] was satisfying, and it went really fast,” Kim says. “We looked kind of ridiculous inside of them, but they’re really fun to drive.” v 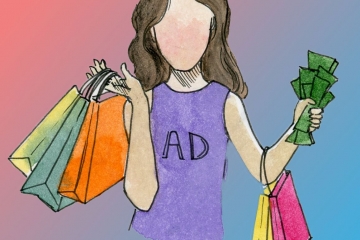 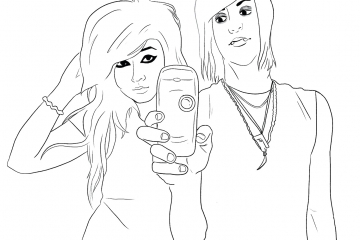 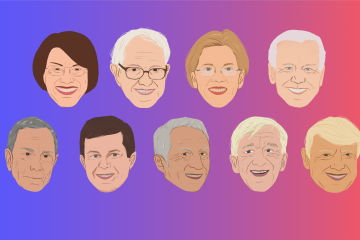 Navigating the primaries: A guide for Paly’s first-time voters