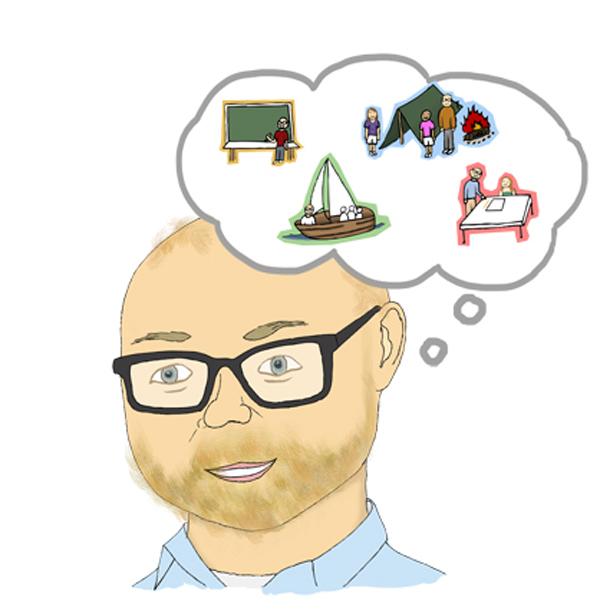 NO MATTER WHO WALKS through that door, they are my student,” Palo Alto English teacher Craig Bark says as a multitude of underclassmen stream out of his classroom, most having achieved a greater understanding of Harper Lee’s “To Kill a Mockingbird.”

During his 17 years of teaching in  Los Angeles public schools, surrounded by gang influence and poverty, Palo Alto High School English teacher, Craig Bark has developed a tenacious empathy for students, enabling him to share and understand student problems both inside and outs of the classroom. “An issue is an issue for a teen, it doesn’t matter if you’re rich or poor, students still have problems,” Bark says.

A desire to expand his teaching repertoire, alongside a extreme distaste for L.A. traffic ,sparked Bark to start a new chapter in his life. Bark began teaching as a long-term substitute for Paly English classes during the fall of 2011 and currently teaches freshman and sophomore english courses full time. Although he currently dons the Viking helmet, his his experiences teaching in Southern California continues to play an important part in his personal philosophy.

When teaching in the Compton area, Bark repeatedly observed students rise above their personal circumstances.

“Most students want to do well,” Bark says.

At an eastern-LA high school, it is not uncommon for a student to pursue an education despite bearing the heavy burden of a broken environment. Often, students who live in impoverished conditions are subject to gang violence, or struggle to maintain a home. Bark paid attention to this and worked to make the classroom a warmer place, his efforts were rewarded when he voted “most inspirational teacher” by his students in 2005.

From his experiences, Bark has found that he cannot always depend on his students to walk into class bright-eyed and bushy tailed. But with patience and empathy he reaches out and makes sure that he can develop a close, open relationship.

“I need to understand how to get you to learn, in order to do that, we need to figure out a way for us to both work together,” Bark says. He believes that personal interaction and a friendship are major components when inspiring a student to learn.

But, many students in Bark’s classes came from broken homes. Kids and teens would miss school in order to care for younger siblings, and regularily struggled with the absence of their parents. Drugs, homicides, and unemployment could greatly over shadow school. With so many conflicted students, Bark found that if he wanted to teach anything, he would have to take the extra step to reach out to them.

Bark learned how to approach teens’ crises and establish possible resolutions. Teen pregnancy was common in impoverished areas in East L.A.. The problem became so great that the school enacted a “heavy duty’ living skills, far more extreme than the Paly requirement, class that mentored teens on how to become a parent and provided them with the tools necessary for rearing a child while maintaining an education.