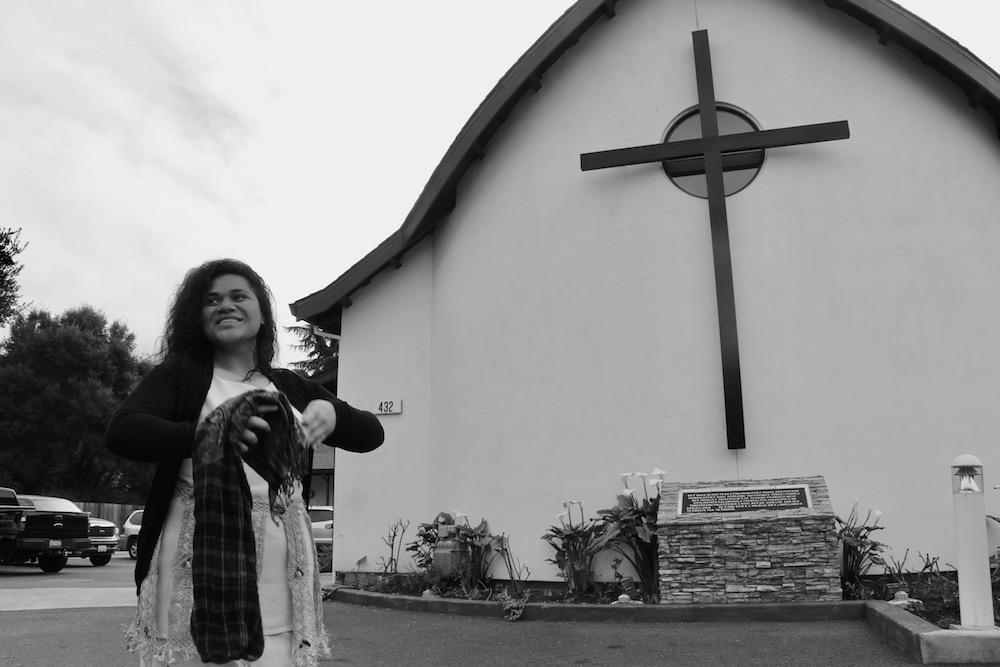 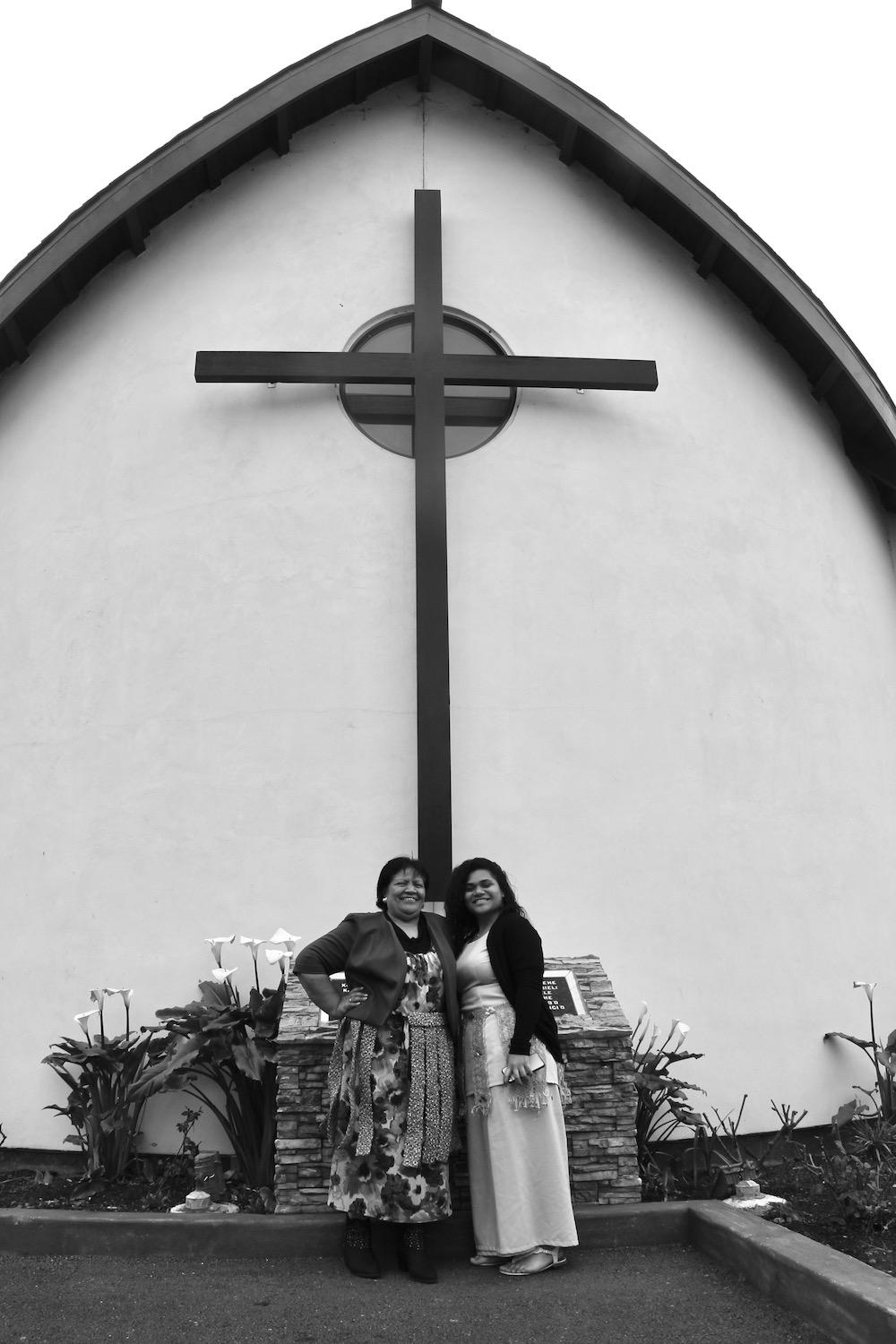 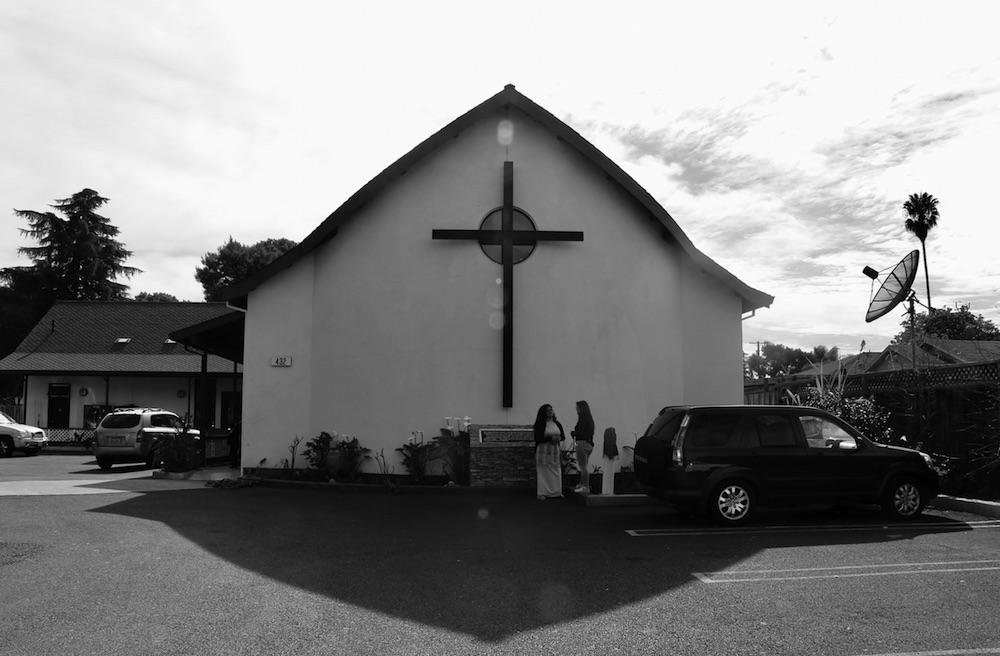 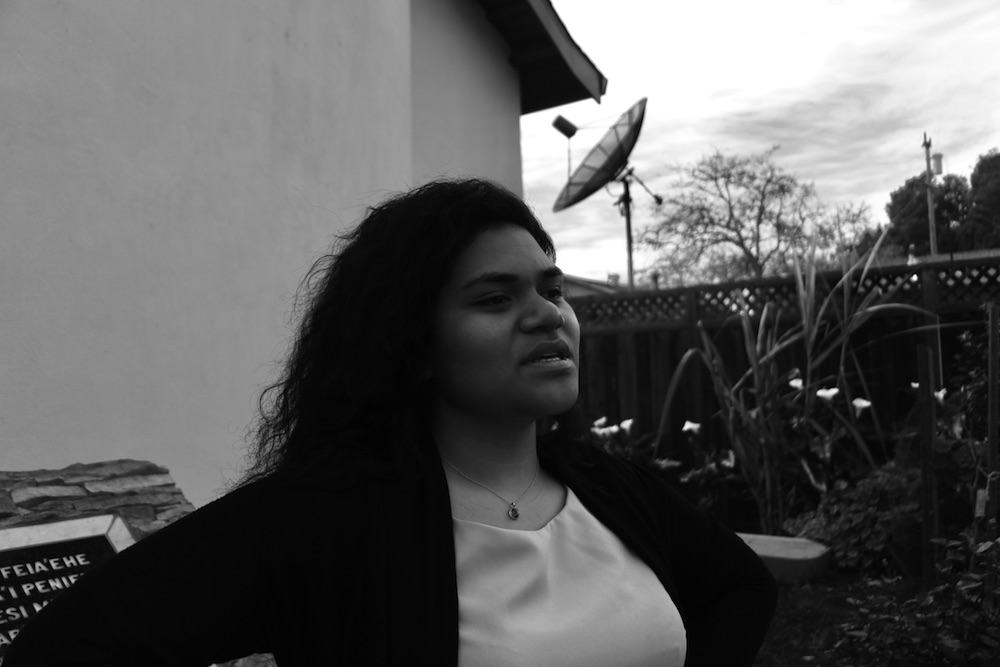 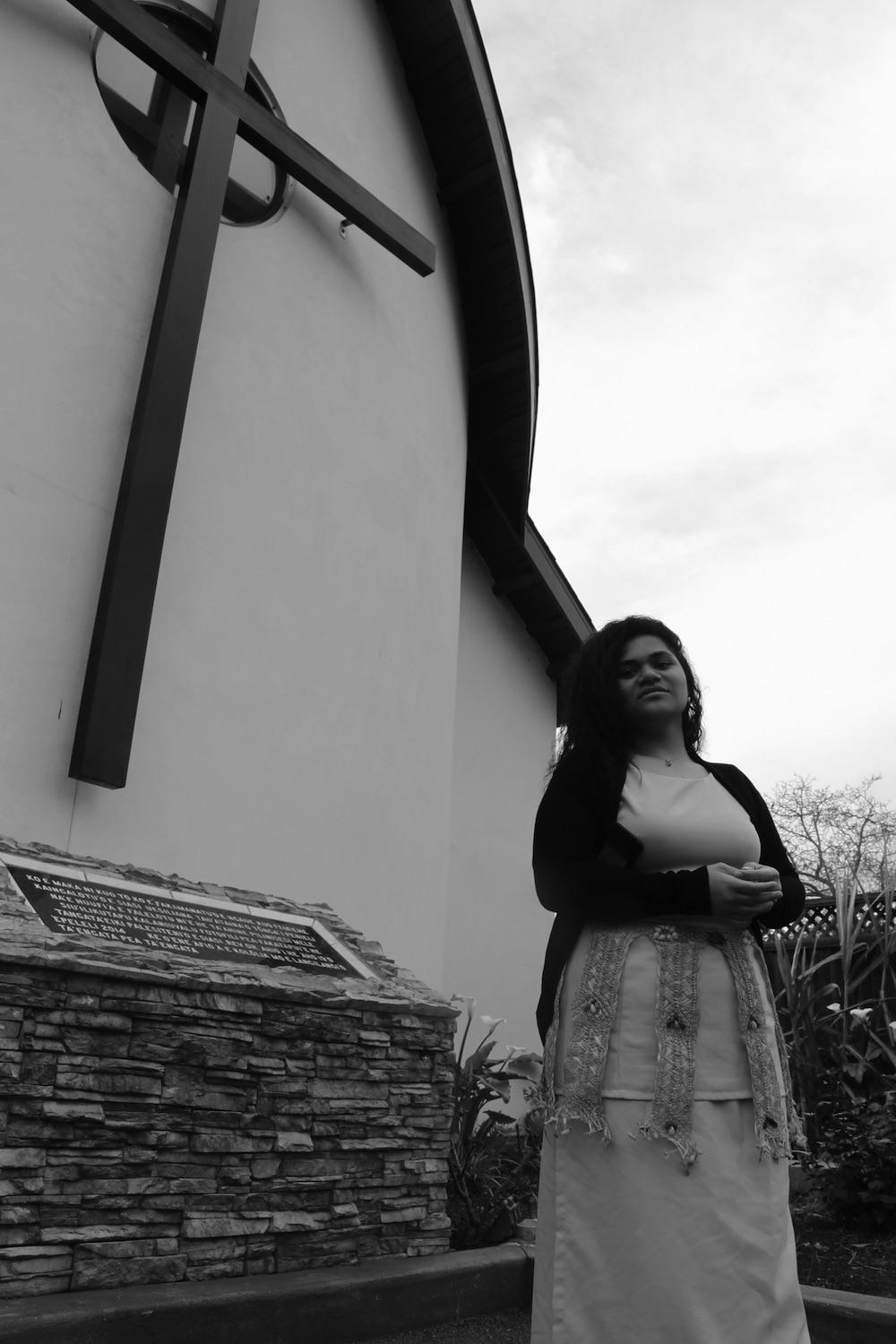 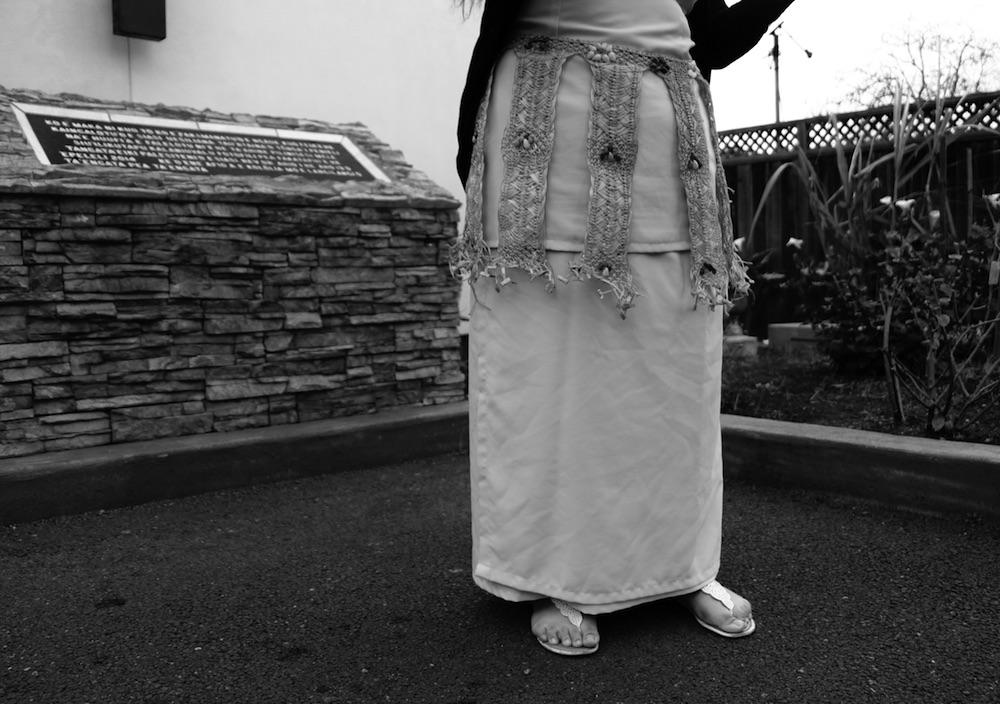 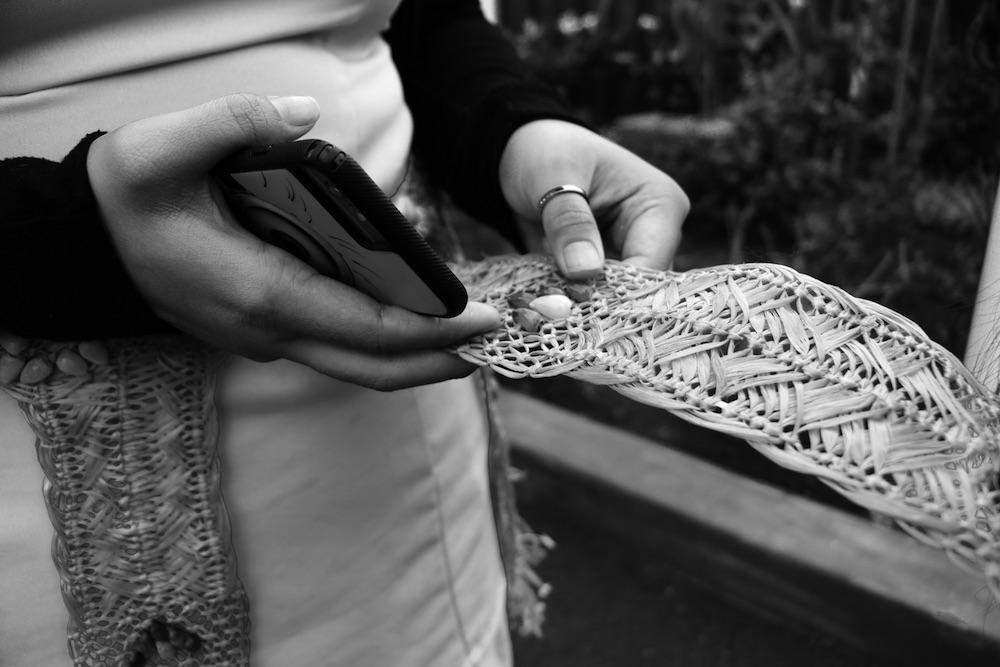 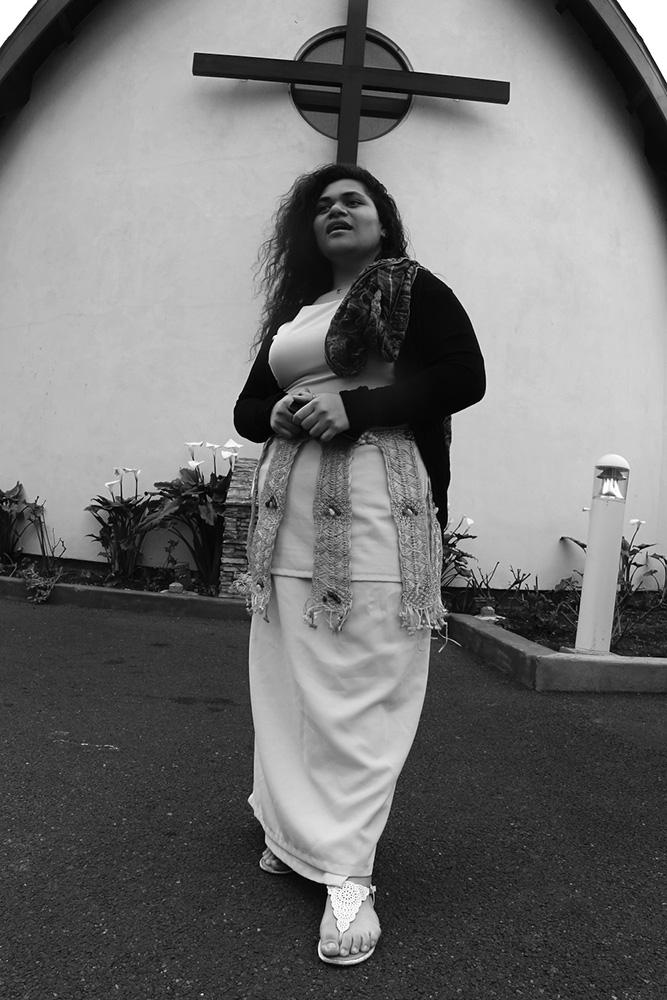 There was a silence on the telephone line as junior Umu Kata paused to think.

“Well, they just started repainting the church, so it’s half-painted.” Her voice, tinged with hesitance, conveyed understandable reluctance. It is hard to invite two strangers into your church, a sacred place for family and culture.

When we arrived, junior Umu Kata waved from the entrance of the Penieli church in East Palo Alto. The church is  beautiful — the bright light behind the overcast clouds makes the church’s white walls gleam, and the newly painted blue trim frames the 12-foot cross hanging on the outside wall.

On Kata’s waist rests a traditional kiekie that her aunt wove for her. It is made out of dried grass and has shells beaded into its hanging strips.

A woman wearing a similar kiekie greets Kata on her way out. She teases Kata and stops for a picture on the way to the car.

“That’s my aunt,” Kata said. “We are pretty much all family here.”

Kata’s Sunday morning church services have always been a constant, comfortable part of her life. Christianity, as Kata explained, is one of the many central values of the Tongan culture.

Kata, Joan Wolfgramm and Meesi Mahe, three of the many second-generation Tongan students at Palo Alto High School, shared their stories with Verde, explaining what it is like to grow up in a Tongan-American  home, learning lessons of pride, respect and kindness.

Wolfgramm, Mahe and Kata were all born and raised in Palo Alto, and their lives are a balance between American culture and the Tongan culture of their ancestors. Whether in English or more commonly, in Tongan, their parents teach them Tongan values that they are expected to carry with them as they grow older.

Throughout her childhood, Wolfgramm’s family stressed the importance of staying in touch with her Tongan culture.

“Once we get more adapted to American customs they start to get offended,” Wolfgramm says. “Because they want us to come out here to have a better life, but they want us to still keep in touch with our Tongan roots.”

For Paly’s Tongan students, an important aspect of their lifestyle is cultural pride

“The thing I like most about it is that we are not afraid to stand up if something were to happen,” Wolfgramm says. “Like we stand together, that is one thing we are really good at as a race.”

In the Bay Area, children often grow up, go to college and start a family of their own elsewhere. Kata explains that in Tongan culture, people do not leave their family unit; instead, they return to support the whole family and stay together.

“In our eyes, we would do so much for them [our parents], because they raised us and we wouldn’t be where we are without them,” Kata says. “If we leave, they might go to those old people homes.”

Wolfgramm lives in a small apartment in East Palo Alto with her seven family members: her mom, mom’s boyfriend, two little sisters, aunt, uncle and brother, who has returned home to help support the family.

“We were taught to respect our brothers in the household by not wearing stuff that is too revealing, or speaking a certain way around family members that are older than us,” Wolfgramm says. “Respect is a key aspect of my childhood.”

In 2016, Kata moved to a small island off of Tonga for a year when her father got a job as a priest. Everything about her life changed: language, traditions, uniforms and constant emphasis on respect.

Having lived  in both communities, Kata now notices that some Tongan families in the United States adhere more closely to tradition, while other families choose to adopt American culture.

Most Tongan people belong to some sect of Christianity, according to the Tongan Department of Statistics. For these three students, religion has impacted their lives in significant ways.

Mahe, whose full name is Meesi Mafua I’Penieli James Mahe, was named after his grandfather, a preacher.

“My first name means ‘mercy.’ Mafua means gift from God … and I’Penieli is a name of a church,” Mahe says. “So I am God’s gift to this church.”

From a young age, being Catholic has been an important aspect of these student’s identities.

“Religion plays a big role in my life,” Mahe says. “The way I carry myself is based on the teachings that I have been taught in church.”

Since birth, Kata has attended the same church her great-grandfather founded.

“To this day, our [church] youth is still growing, but I feel like we can do more for our tradition,” Kata says. “Every first Sunday of the month, we have this action song that we perform in front of everybody.”

Mahe, Kata and Wolfgramm have each found their own ways of incorporating the Tongan traditions they have grown up with into their everyday lives.

“I don’t like to hide my identity,” Kata says. “I want people to know where I am from. When I have kids I am going to tell them everything about my traditions because that’s how my parents raised me, and I would definitely do the same.”