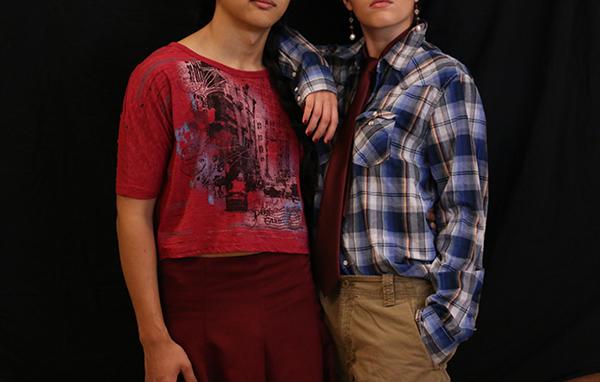 They/Them, Singular: Exploring gender outside of the binary

“I think the biggest thing about my gender is that 98 percent of people in this school don’t even know it exists,” says Riley, a Palo Alto High School student whose name has been changed along with other student sources for this story.

Riley identifies as gender fluid and thus represents several different genders through personal expression. Riley uses they/them pronouns to refer to themself singularly, as they feel that the genderless term best reflects their identity. Throughout the rest of the article, some other sources refer to themselves this way, while others use gendered pronouns. Although this might be confusing to some readers, we chose to use our sources preferred pronouns out of respect for them.

Riley, like other students interviewed in this story, does not identify within the gender binary. In other words, they do not feel comfortable identifying solely as male or female; non-binary people can feel they are both genders, neither or a mixture of the two. Some terms they use to describe themselves are genderqueer, non-binary, agender and gender fluid. 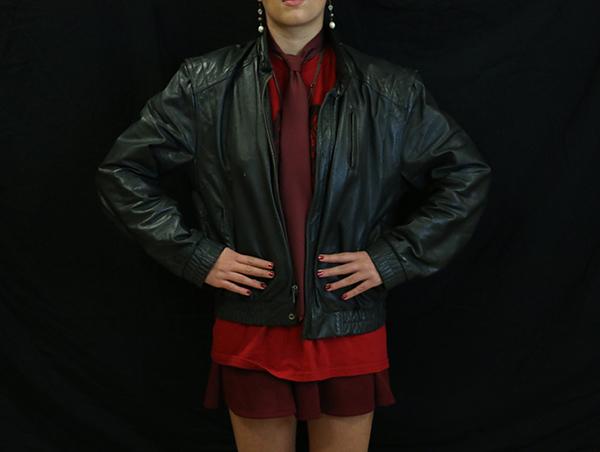 Suit and tie: A model wears a combination of masculine and feminine clothing.

“It’s possible to identify as non-binary, meaning I don’t feel exclusively like a male or a female, meaning I feel like a little bit of both, or meaning I move fluidly between those,” says Jenn Burleton, the executive director of the TransActive Gender Center, a nonprofit based in Portland, Oregon, which works with gender nonconforming youth.

A Western Association of Schools and Colleges survey administered anonymously to 1,727 Paly students at the beginning of this school year reported 33 students who did not identify as either a girl or a boy when given the options of boy, girl and other, although Paly Principal Kim Diorio estimates the actual number of students is probably higher when those who didn’t take the survey are taken into account.

Seemingly small steps like surveys that validate gender identities outside of the binary make many non-binary students feel like they are finally getting recognition after a history of being disregarded, they say. Facilities that validate identity represent a new era that some say is a new and needed civil rights issue.

Non-binary pronouns are a prominent issue for people who don’t identify within the binary.

On Facebook, agender Paly student Cameron’s pronouns are they/them, and they often get comments on photos or statuses pointing out how funny it is that Facebook is saying they are plural. Cameron also faces issues in their classes.

“When my teacher is like, ‘Okay ladies and gentleman, you can do this,’ I’ll be like, ‘Yeah, not for me,’” Cameron says. 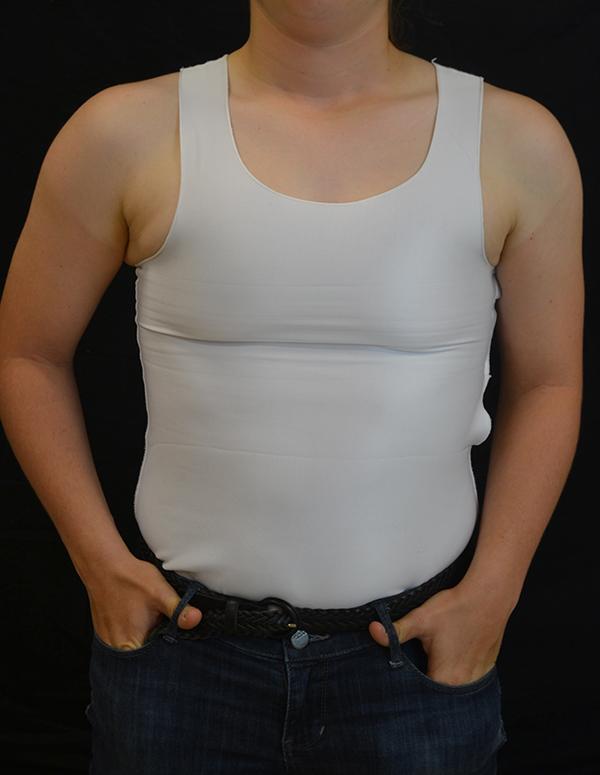 Bound: A model wears a chest binder, which allows people to flatten their chests.

“I think it’s really important that teachers just keep trying,” Diorio says. “It’s okay to make a mistake once; we all learn from our mistakes. If it keeps happening, then I think there’s a bigger issue.”

A common reason some people do not use they/them pronouns is because they feel they are grammatically incorrect.

Cameron thinks of the argument of grammar as an unjustified excuse, saying the only way to ingrain the pronouns is to just use them.

“Lots of stuff in English isn’t grammatically correct, and we say it anyway,” Cameron says. “Language is adaptable and changing and never set … Shakespeare used singular they pronouns, and so did Ms. [Jane] Austen.”

Burleton confirms the idea of language being adaptable.

“Language is a living thing; language evolves,” Burleton says. “There’s all kind of words that this country takes for common use. They/them can be singular or plural … we’ll adapt to that.”

Furthermore, Burleton says that the complaint over grammar is in fact not about grammar, but about the kids’ identities.

“What I say to people like that [who don’t respect pronoun preferences] is, ‘Really? We’re going to go to war over grammar versus decency and respect?’” Burleton says.

Like others who differ from societal norms, non-binary kids often struggle with bullying and being misunderstood by their peers.

Taylor, an agender Paly student, is not very open about their gender identity, because they feel as though the culture at Paly creates an unsafe environment for non-binary students.

“I feel like there is a risk of that [violence] happening to people,” Taylor says. “I definitely do think that there is an opportunity for them to be bullied.”

Echoing Taylor’s sentiment, Morgan, a Paly student who describes himself as a genderfluid trans guy, does not readily reveal his gender identity for fear of harassment. 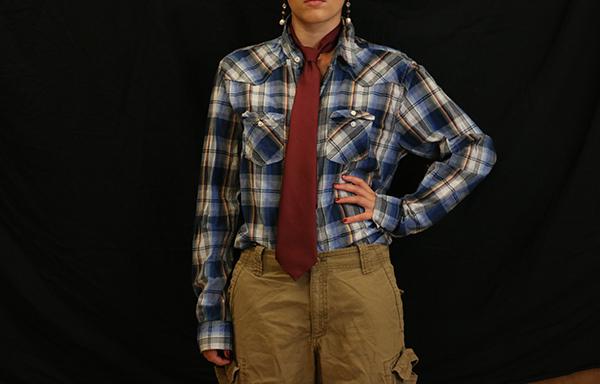 Juxtaposed: A model wears clothing that is generally considered boy clothing while also showing off their traditionally feminine earrings and nail polish.

Taylor feels that a lot of improvement is necessary to make Paly a safe space.

“On a scale of one to 10 [of how accepting Paly is of non-binary genders], it’s like two, maybe a 1.75,” Taylor says. “Although yes, there are sects of people [that have made me comfortable], … I [have] never felt accepted when expressing myself in an ‘out of the ordinary’ manner.”

Burleton confirms that non-binary students are often bullied because of their gender identity. The TransActive Gender Center, which works with over 400 families, deals with this issue daily, according to Burleton.

“Kids that don’t conform [to gender norms] are bullied, harassed, abused [and] rejected by their families and other adults, across the board,” Burleton says. “Gender non-conforming kids are on [the] same trajectory as gender conforming kids; they just want to fit in.”

Four percent of Paly students identify outside of the binary or are questioning their gender identity. According to a survey conducted in Paly English classes, 28.2 percent of Paly students report that they do not understand some gender identities. One of the situations that Taylor faces at Paly is when they wear dresses to school and receives mixed reactions because they are perceived as being male. Although some people are very supportive of them, Taylor still has experienced people expressing outright disgust at their clothing.

“The moment you see a guy in a skirt, it’s like China’s invaded the U.S.,” Taylor says. 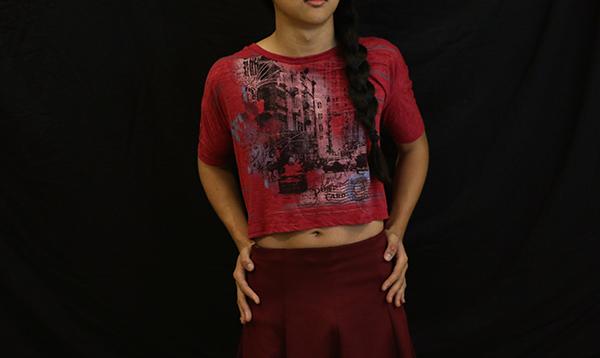 “Girl clothes”: A model shows off their “girl clothes.” Many genderqueer people struggle with wanting to wear gendered clothing.

Burleton explains that the stigma Taylor faces when wearing a dress and being perceived as a guy comes from deep rooted cultural sexism.

“Feminine behavior is not tolerated because it is someone born into the ‘first class’ acting like a ‘second class’ citizen, which is a threat to the patriarchy and   misogyny,” Burleton says. “My generation has done a really bad job of promoting supportive environments for kids who are different.”

Non-binary students often struggle with gendered facilities, seeing as they do not identify as either male or female and everyday these students have to make a decision about what bathroom to use.

“There are other people who don’t know me who do give me trouble about [using the opposite sex’s bathroom],” Taylor says. “But honestly, I kind of try to skirt the issue by not using the bathrooms at school at all.”

A gender neutral bathroom is legally required to protect non-binary students as it falls under AB 1266, which requires schools to provide facilities consistent with students’ gender identity.

The amendment, titled Assembly Bill 1266, went into effect Jan. 1 across California, permitting students to “participate in sex-segregated school programs and activities, including athletic teams and competitions, and use facilities consistent with his or her [or their] gender identity, irrespective of the gender listed on the pupil’s records.”

Diorio has been very mindful of the law in supervising construction.

“As we do construction with our new buildings, I want to make sure we have more unisex bathrooms for students, and making sure that we have a unisex locker facility in the new gym,” Diorio says.

The new gym, which is scheduled to begin construction in December 2014, will include a unisex locker room, as well as male and female lockers. In addition, several single stall unisex bathrooms will be included in the new athletic facilities, according to Diorio.

Looking to the future

One of Burleton’s main jobs at the TransActive Gender Center is to travel to different schools and educate administrations on how to best support non-binary students. To Burleton, the key to change is for each member of the administration to change on a personal level.

“The first thing the administration can do is to educate themselves and question themselves and their own cisgender privilege,” Burleton says. “If you think you’re going to create a safe environment by first telling students without telling yourselves, you’re wrong. You have to question yourself from the top down.”

Education about gender identity and other lesbian, gay, bisexual, transgender and queer issues is vital for Paly right now, according to Diorio.

“There’s an educational component that goes with it in terms of making sure teachers understand,” Diorio says. “Once you provide that education and that awareness, they [teachers] are able to empathize.”

Diorio says the most important step Paly must take is school-wide education in order to create a better and safer community.

Several students at Paly identify as non-binary or are questioning their gender identities.

For Cameron, who identifies as agender, gender is more of a social construct than anything else.

One of the obstacles that deters Cameron from coming out is the scrutiny.

“I don’t want them to ask weird questions,” Cameron says. “I’d just be like, ‘Maybe you should just Google this?’”

“It seems that even if I do talk about it, most people don’t understand or recognize being agender.” Taylor says.

They struggle with showing their gender.

“Masculinity is the ‘norm,’ so I struggle with how do I tastefully start being more feminine?” Taylor says.

Although Morgan is a self-described “pansexual trans guy” and uses he/him pronouns, he still identifies as genderqueer.

“I’m currently kind of fluid,” Morgan says. “As in there’s some days where I wish I was a girl … or if it’s me wanting to be more masculine for that day. It’s different for every person.”

Riley identifies as gender fluid. After asking a teacher at their old school to use the pronouns they prefer, the teacher got angry.

“My teacher, he thought it [using a gender neutral pronoun] was ridiculous,” Riley says. “It made me cry. He started poking at my sex; he was really bent on me staying female.”

Alex uses feminine pronouns but hasn’t yet decided on which gender she truly identifies with and is comfortable expressing.