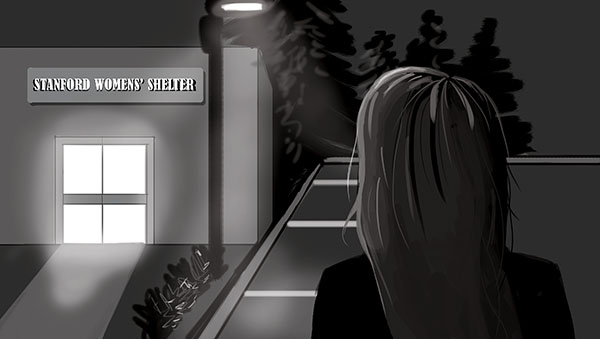 Their Heart and Home: Closure of shelter hurts local women

Ten minutes. That is all the time Christine’s landlord gave her to leave her apartment during her eviction. As she scrambled to get out, she says her 6-week-old kitten was killed and her landlord stole four truckloads of her belongings.

Christine had been a stay-at-home mom of three in Cupertino until she divorced her adulterous husband and was subsequently kicked out of their house. Around the same time as her eviction, she was cut off from the child support she had been living off of because her youngest son turned 17½. Having lost everything, Christine became a statistic: one of the countless homeless people living in the Bay Area, and a living argument for the need for shelters.

Christine, unable to afford housing in the expensive Bay Area community, has been forced to stay in shelters since her eviction. While she has stayed in places like the Armory in Sunnyvale and WeHope in East Palo Alto, her favorite shelter remains the Stanford Women’s Shelter, where she lived during the winter of 2013.

Christine, whose name has been changed to protect her identity, stayed in the shelter for almost three months with 18 other women. SWS, planned as a cold weather shelter, was supposed to open again for the winter of 2014, but were unable to do so due to complications with its host churches, leaving hopeful residents like Christine without housing and a much-valued community.

Although Christine was able to return to WeHope, many of those women were left out on the street, in cheaper housing outside of the Bay Area, or, like Christine, in co-ed shelters. After having stayed in a shelter that catered so well to their needs, these women are again facing the challenges which SWS had begun to help them overcome.

Following Christine’s eviction, the first two shelters she stayed at were co-ed. According to Christine, the sexual abuse in mixed-gender shelters is very high; the majority of the women she talked to said they had been sexually abused. Her experiences contrast with a 2014 White House report in which 13 percent of homeless women in shelters reported sexual abuse, suggesting a higher rate, at least in the shelters Christine stayed at. In a women-only shelter, much of that sexual abuse disappears, making a more comfortable and safe environment.

For Christine, who worked at a hospital before her eviction, complications with government disability funding prevented her from earning money that she desperately needed. Her disability requires multiple back surgeries, but due to the instability of living in a homeless shelter she has not yet had the opportunity to undergo them.

“I’ve been working …for my social security disability insurance,” Christine says. “But because I have a pension from [the hospital], I cannot get the security disability until I spend my pension. I’ll be 60 this year, but I can’t get my pension until I’m 62 or have SSDI, so I’m in catch-22. … I need to be in a place. I can’t have back surgery and be thrown out [from a shelter].”

Christine’s story is not unusual; once homeless, it can be difficult to find a home again. According to Adam Klein, the programs and services manager at InnVision Shelter Network, high rent prices have led to an increase in homelessness. For instance, the average rent for a one bedroom apartment in San Mateo County is $2400 a month, while a single worker earning minimum wage and working full time will only earn around $2000 a month.  It doesn’t help that 13 of the 20 most expensive cities in the U.S. are located in the Bay Area.

“It is very easy for [a] family to go from on the verge of extreme poverty and homelessness to homelessness, and they [both parents] could both still have jobs,” Klein says. “We are seeing an incredible increase in the number of working homeless — working poor who become homeless. People who have jobs, who have maintained employment and still cannot afford rent in this area.” 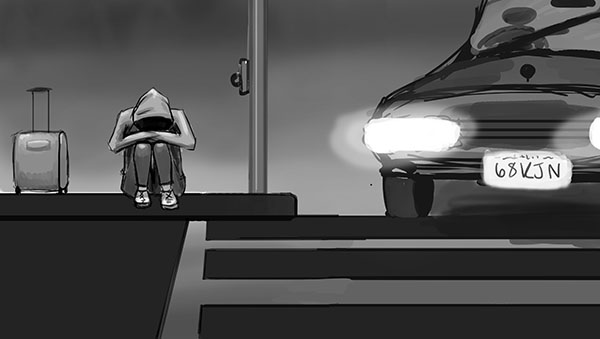 For many low income families, homelessness can be just a paycheck away.

The Stanford Women’s Shelter, also known as the Heart and Home Collaborative, began as Stanford Night Outreach, a group created by Stanford students in order to learn about homelessness in the community. After deciding to create a shelter in 2012, the HHC reached out to InnVision Shelter Network and created a partnership for a women-only shelter.

“We heard from InnVision, our partner, that they really felt this was a need,” says Aparna Ananthasubramanian,one of the shelter’s founders. “We felt that we were creating a safe space for women.”

There is an urgent need during the winter months for homeless people to be housed in safe and warm places. While the Bay Area boasts a warmer climate than other locations, according to Palo Alto Online, at least five homeless individuals died from cold weather exposure in the 2014 winter. As the city of Palo Alto has no permanent shelters, many homeless people in the city are forced to travel to East Palo Alto and beyond for shelter.

For Ananthasubramanian and her peers, the lack of cold weather shelters made the idea of a winter shelter an obvious choice.

The students set to work on their goal, creating the HHC, their non-profit organization dedicated to helping the homeless.

While the HHC was in operation, the shelter’s day-to-day business was mostly run by community and student volunteers, who served breakfast and dinner to the clients. For the first half of the winter, the shelter was hosted at Peninsula Bible Church on Middlefield Road, and University Church hosted it for the remainder of the winter. Since it was hosted at an active church, the residents had to leave the building by 7 a.m.; Volunteers would arrive early every day to make breakfast and ensure that the women were able to pack up their belongings before leaving during the day.

At 7 p.m., the shelter would reopen and the women, coming off work or however else they spent their day, would trickle in. Staff and volunteers made dinner, and the entire community had a chance to talk to get to know each other.

“Most people just really wanted to talk” Ananthasubramanian says. “Sometimes we would have people who came in and they brought a lot of friends, and we would have concerts.”

Often around 9:30 p.m., the women went to bed to facilitate their early wakeup.

Many of the women who stayed at the HHC had faced other traumatizing events at some point in their history, and suffered residual effects from those experiences. According to Christine, the HHC helped those women process their past experiences in a safe environment.

“There are some women who are pretty shell shocked and have post traumatic stress from some of the abuse,” Christine says. “Being in a women’s shelter helped heal them because we were all able to relate with our own abuses and discuss tools in which to heal the injury and make an effort to move forward.”

Christine herself experienced an unusual form of healing while she stayed at the HHC.

“One time, the pastor was out early in the morning, and I had nightmares,” Christine says.  “So I went out [in the lobby] in the morning just to shake them off, and he said he was sorry [that I was having nightmares]. I said, ‘No, because when you have nightmares, it means you feel safe enough to process some of the drama.’ So I felt safe enough to have dreams. That wasn’t something I had had in the past three years.”

Her emotional experience at the shelter was mirrored by many of the other women who stayed there. According to Christine and Ananthasubramanian, both the volunteers and the residents formed many close bonds while the shelter was open.

“We really emphasize forming friendships and creating a sense of community at the shelter,” Ananthasubramanian says. “It was a lot [of us] trying to build understanding with people, and we tried to keep the relationship much more reciprocal [than at other shelters].”

The HHC was unable to open this winter due to an ongoing permit issue. Concerns from neighbors led the City of Palo Alto to change the shelter’s permit to a conditional use permit. This meant that they had to discuss the intended use with residents surrounding the potential shelter.

“This [permit] would cost $3,500 and might potentially require a vote of the City Council for approval,” says Andy Burnham, a pastor at Peninsula Bible Church. “As this was being clarified, we essentially ran out of runway for having the shelter during the winter of 2014-15.”

Unfortunately, the rest of HHC’s potential hosts were also unable to acquire the permit in time to open last winter. This meant that women like Christine had to find other places to stay.

When open, the HHC managed to fill a gap in the lack of shelter for homeless people in the Bay Area, especially in the area of women’s only shelters. The HHC may not have been able to provide support for women this winter, but that does not mean that its days of serving the community are over. 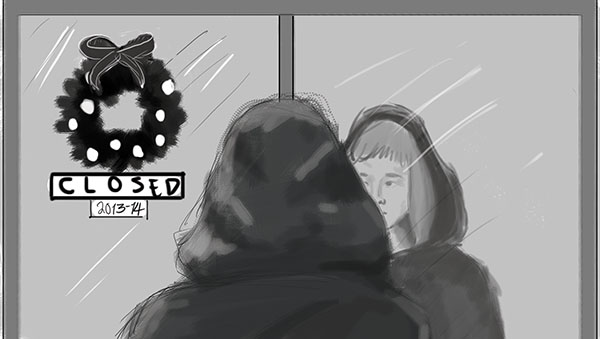 When the HHC did not open in the winter of 2014, many women who had eagerly awaited the winter were forced to find another place to stay.

Plans for the Future

Despite past setbacks, the shelter is looking forward to helping even more women in future winters. One important step for the HHC is getting a head start on the process for next year.

“There are churches that are showing a lot of interest in working with us in the coming year,” Ananthasubramanian says. “The churches have been very proactive as well about taking ownership over this process and really creating committees to figure out how to do it well.”

In the meantime, the HHC is still trying to achieve its mission of helping women find shelter.

“We want to create a small fund for the people who stayed at our shelter last year who are currently not stably housed,” Ananthasubramanian says. “We want to put that money towards any housing related needs that they may have, be that motel stays or rental assistance.”

Because the shelter’s residents had such positive experiences, when the shelter does reopen, there will be no shortage of women who will want to stay there.

“People were asking if the HHC is going to be open this year,” Christine says. “Not people who stayed there before, but they have just heard so many good things about it [that they want to stay there themselves].”

After three years, Christine has finally received a voucher for subsidized housing. Though she is no longer homeless, she  would like to work with the shelter again.

“If it were to reopen, I would be willing to volunteer and help in any way I can,” Christine says. “I feel what has been given to me does need to be given back to the community and awareness needs to be raised. I know I was not aware of this [issue] when I had a home. I know that people I meet have no idea.”