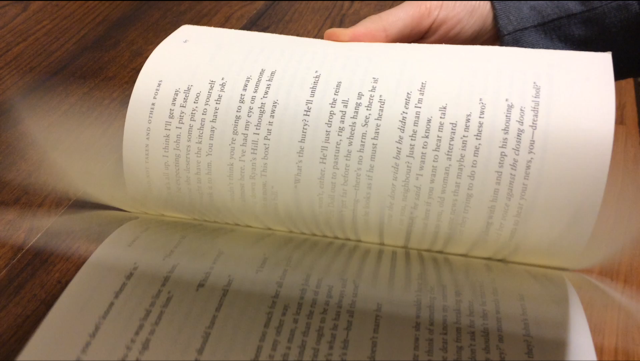 The Write and the Wrong: Three creative writers at Paly find their distinctive voices

A prosaist. A playwright. A poet. All three a master of their respective craft, and yet each with a different outlook on writing and on the world as a whole. Meet Ria Vora, Devony Hof, and Alec Vincent, three creative writers at Palo Alto High School. Even with the rigor of academics, these three juniors have kept their passion for creative writing alive, but each in their own way. Verde sat down with Vora, Hof, and Vincent to learn about their writing journeys, and to listen to each of them read some of their work.

RIA VORA, a junior at Palo Alto High School, started writing in fifth grade; two years later, she participated in National Novel Writing Month, achieving her ambitious goal of writing 1,000 words every day during the month of November. As a result, the company helped Vora publish her first novel, The Possessor’s Mission, which can be purchased on Amazon. “[I] shared it with all my friends and my creative writing teacher and it was really amazing for me,” Vora says. Since then, Vora has continued writing and has gone on to win several medals for her short stories through the Scholastic Writing Awards.

Since winning the Children’s Theatre 10-Minute Playwriting Contest as an eighth grader, DEVONY HOF, now a junior at Palo Alto High School, has been writing plays in her free time. “I write plays kind of because they’re a combination of my love of theater and my love of writing and reading in general,” Hof says. Hof also submits her work to contests whenever possible. This year, she is the youngest person taking part in PlayGround Writers Company, a playwriting competition in which six finalists, which will be selected later this year, are given the chance to see their play performed by a Hollywood-based theater company. Hof also founded a creative writing club at Paly last year.

Music — and specifically writing song lyrics — proved to be the perfect stepping stone into poetry for ALEJANDRO VINCENT, a junior at Palo Alto High School. From there, he discovered his love for poetry specifically through limericks and poems with a beat or rhyme scheme. This semester, Vincent is taking Writer’s Craft, a Paly English elective which focuses on creative, rather than academic, writing. “It [the class] creates a space in which we’re not only allowed to but encouraged to write … [It’s] an environment that makes you want to share, that makes you want to join in as part of the classroom discussion,” Vincent says. Recently, Vincent’s play was one of the handful selected to be performed at Page to Stage, an opportunity for Writer’s Craft students which allows them to see their plays performed by Palo Alto Children’s Theatre, a local student theater company.