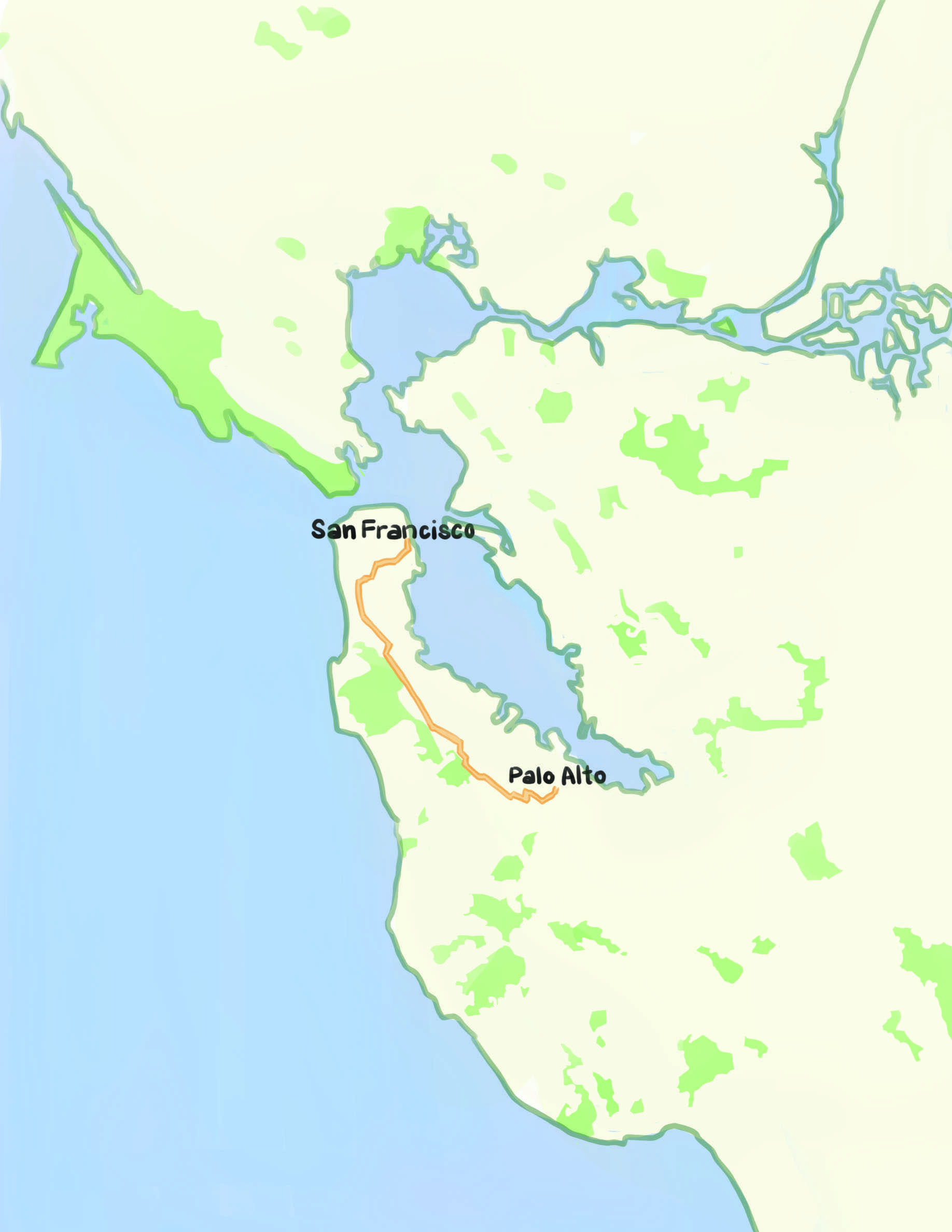 The Urban Trekker: A Modern Alternative to Traditional Hiking

Every advancement up the patterned steps, mosaiced with the ocean waves, reveals an expansive view of the San Francisco skyline.  Rows and rows of gray houses line the sea, and the faint smell of the sea water wafts in the breeze. The sea breeze is eventually blown in the direction of the momentous Golden Gate Bridge. Overwhelming in the senses, the view of San Francisco from the top of the tiled steps of 16th Avenue is only the beginning of an emerging journey of urban hiking.

A great way to explore a city, urban hiking allows the same amount of exercise without the deterrences of traditional hiking: muddy trails, poor cell service, rash-inflicting plants, meager numbers of bathrooms and more. Its own deterrences of the city traffic is a minuscule implication during the breathtaking hike. Surrounded by the limitless paths in the city, urban hiking instills a spirit of exploration. When embarking on an urban hike, small details that cover the city, such as murals of penguins waddling next to an albino alligator, can be discovered and appreciated in their full entirety.

There are some downsides in city trekking. Traipsing up and down the concrete hills wearing socially acceptable clothing in San Francisco, the bar is substantially higher than in Foothills Park is a laborious task.

Of the countless paths in San Francisco, Verde decided to begin our 1.8 mile long journey at the 16th Avenue Tiled Steps, wander through the hilly city terrain, weave through Golden Gate Park and conclude our journey at Stow Lake. 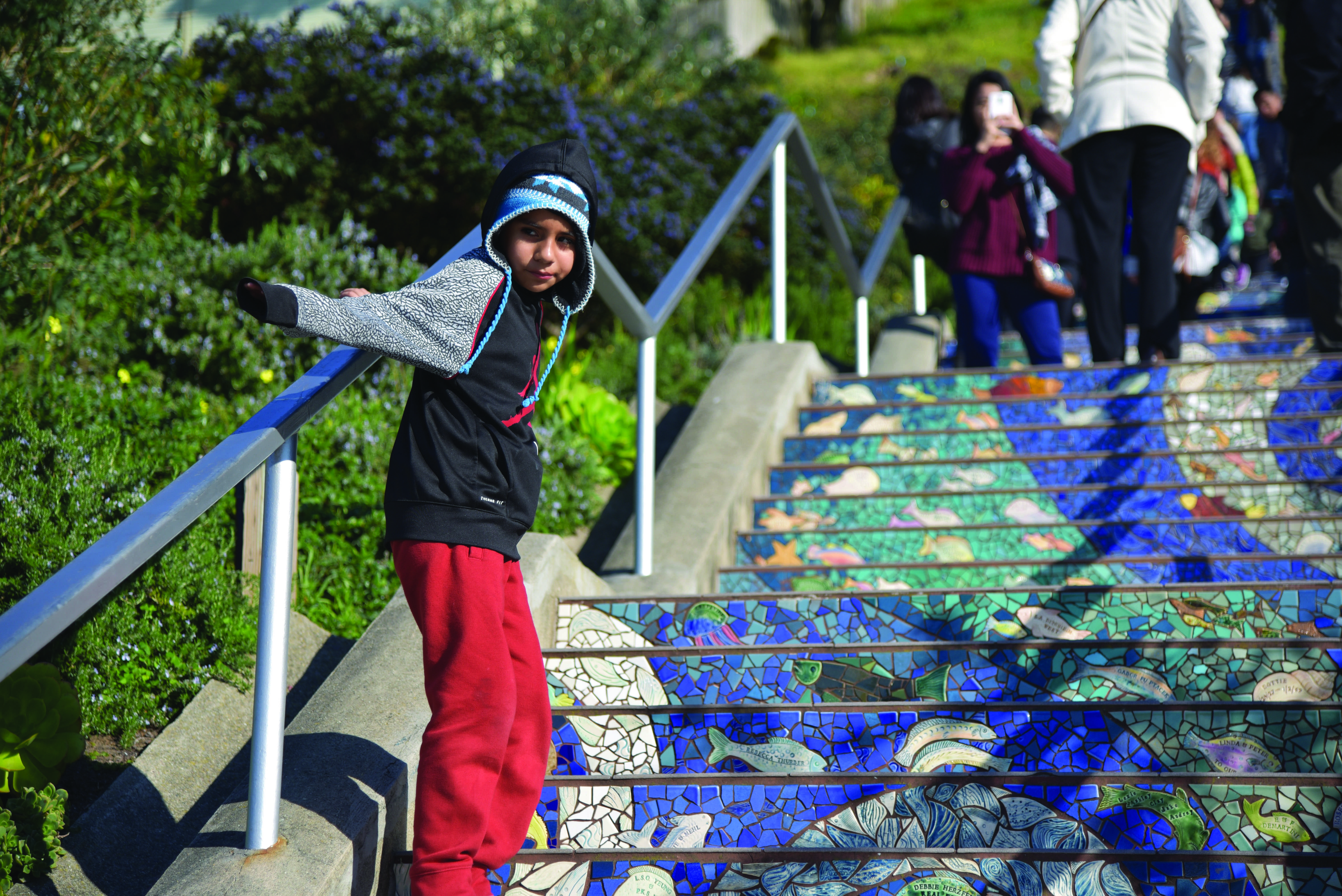 A boy slides along the handrail of the 16th Ave Tiled Steps, a popular destination for locals and tourists.

Our first destination, the 16th Avenue Tiled Steps situated on Moraga Street in the Inner Sunset district, closely resembled the uphill hike on a wilderness trail. However, instead of thriving bushes and untampered trees, we found delicate succulents lining the splatter of red, yellow and blue tiled steps.

This modern tourist attraction was an effort to connect the neighbors in a community project that would enhance the Golden Gate Park experience in 2003. It wasn’t until 2005, however, that the mosaic steps were unveiled, marking its opening day as “16th Avenue Tiled Steps Day.”

As we made our way up the dazzling flight of stairs, the mosaic changed from depictions of jumping fish in the deep ocean to the glowing sun bursting through the horizon. The mosaic of the warm sun peeking through the hazy skyline is mirrored with the view at the top of the tiled steps. A complete view of the city from edge to edge was breathtaking — which didn’t exactly help our breathless condition from hiking the steep steps. We were able to glimpse the Golden Gate Bridge poking above a tangle of trees and hills, the waves from the Bay crashing onto the shoreline and the straight, asphalt veins of the the city.

Colorful murals of San Francisco’s city skyline are displayed on the walls of Woodside International School.

Once descending the glorious steps, we turned right on 17th Ave. The end of the downhill path lined by the eccentric townhouses on 17th Ave leads to one of the many murals painted by the Woodside International School, led by the Hidden Garden Steps project, a community-based volunteer art project. Similar to Tiled Steps, the murals were an effort to enhance and protect the surrounding area so that it would become a gathering place that was representative of nature and the welcoming neighborhood spirit.

The intricate murals capture the brimming life and popular tourist attractions of San Francisco. On one side of the street, the mural depicts the symmetric and exacting townhouses, ranging only in their colors of blue and yellow. An approaching BART train can be seen peeking from the corner of the mural, representing the value of public transportation in the city.

The opposing mural showed a more general depiction of San Francisco. Fighter jets boomed across the blue-gray sky and over a jungle of trees. Plumes of heavy fog partially shroud the front of the mural, obscuring a segment of the Golden Gate and AT&T Park. The skyline lined the back of the mural, just above the San Francisco Bay.

An alternative to bushy trees and unruly plants, the murals highlighted the urban aspect and the historical community efforts seen throughout the urban hike. 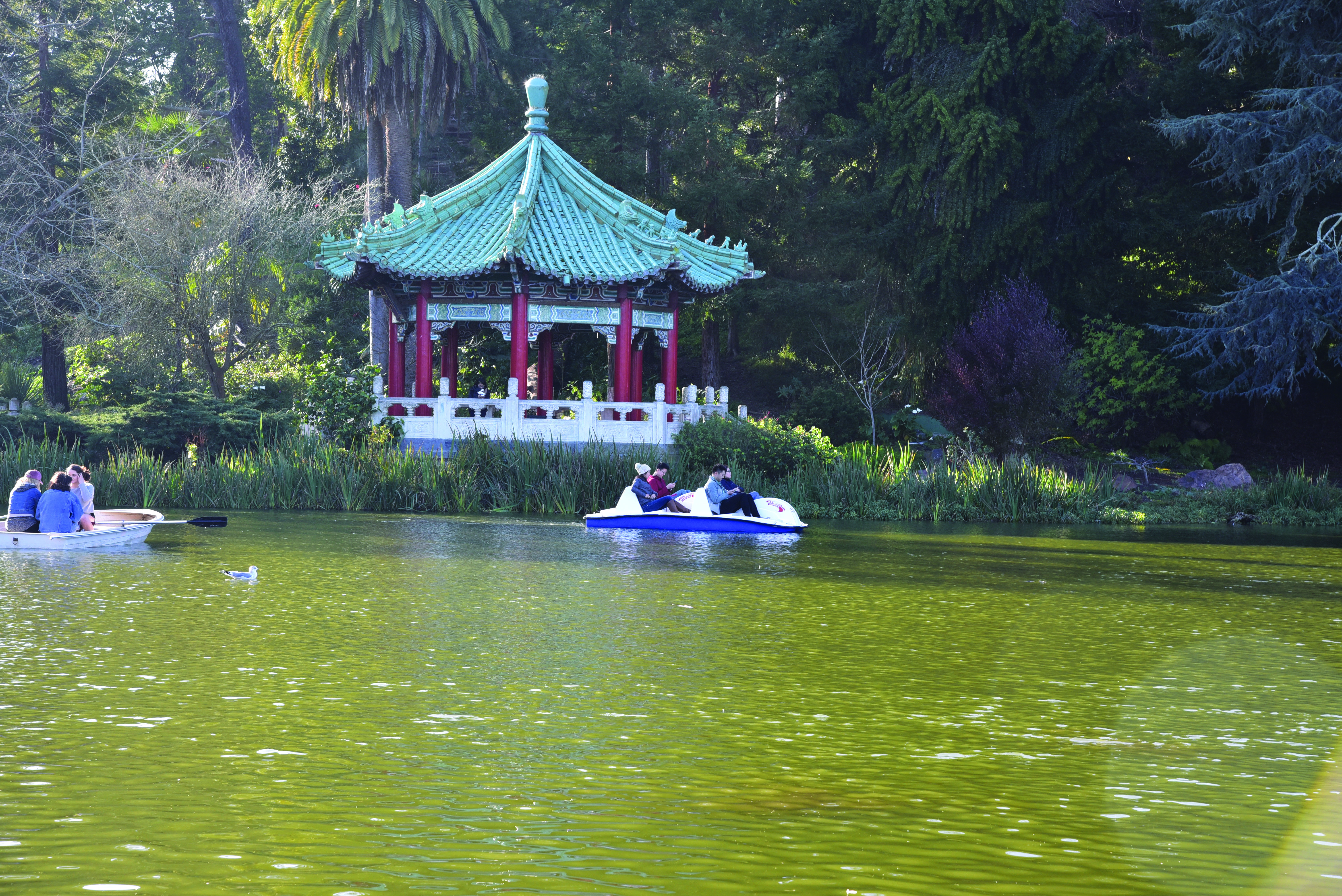 Paddle boaters glide next to a Chinese gazebo through the waters of Stow Lake, an area nestled in Golden Gate Park.

The colorful houses of 17th Ave ended abruptly at Golden Gate Park. The pathway to the entrance of the park was a sketchy dirt trail — not a sidewalk — at the side of a busy street. To our right, oak tree branches and leaping shoots of grass slapped our faces and legs. To our left, cars flew down Lincoln Way as we cautiously tiptoed through the narrow path.

Alas, we arrived at a glistening, green lake surrounded by tall, luscious bushes and taut strands of cattails. Paddleboats glided along the center of the lake while ducks and geese dotted the shores as a Chinese-style gazebo stood solemnly at the other end of the lake. A toddler fed pigeons while another sat in her mother’s lap while many families wandered around the lake, pushing strollers and chatting amiably amongst themselves.

Our legs cramping, backs and foreheads wet with sweat, we decided to turn around and head back to the refuge of our air-conditioned car. As we passed by the same towering trees, flying cars and earth-toned houses on our way back to the car, the sun slipped lower in the sky and a cool breeze picked up, as if the city of San Francisco was giving us a pleasant farewell.