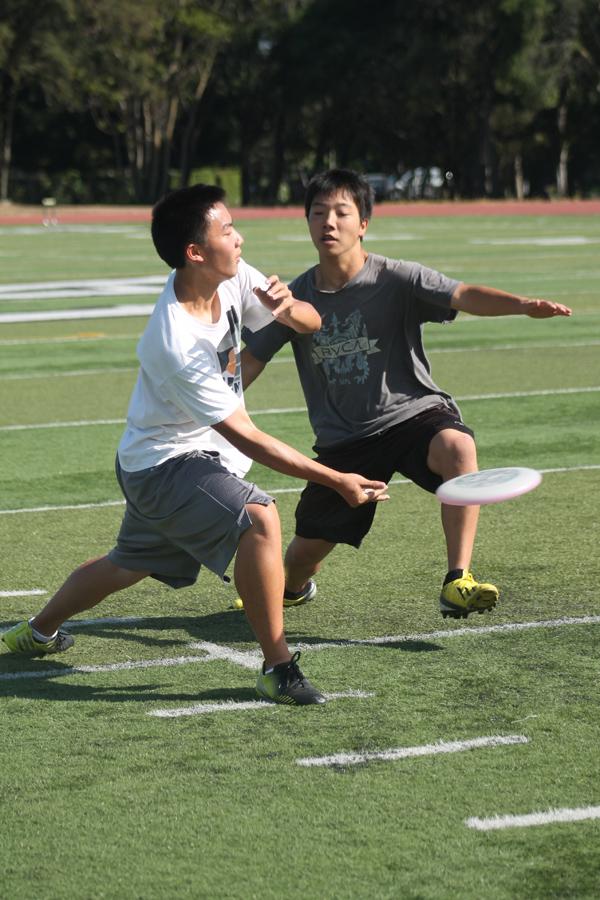 Ghenki Okumoto straddles in at attempt to block Allen Zheng’s throw during an ultimate practice on the Paly football field.

Senior Allen Zheng stretches his arm to throw a disc to an open teammate as junior Ghenki Okumoto counts away Zheng’s time: “Stall one. Stall two. Stall three…” Okumoto reaches his arms out in an attempt to block Zheng’s pass. After a few seconds’ struggle, Zheng manages to hit his target teammate and the scrimmage rapidly continues from the break in play. In a game to three, the 10 team members present play against each other for the remaining hour of practice.

Zheng and Okumoto are both members of the Palo Alto High School ultimate team, which was founded last year by a group of graduating seniors with a passion for the sport.

“Eventually, we got to the point where we were looking for a bigger challenge than simply playing against each other,” Paly 2012 graduate Greg Dunn and ultimate team founder says. “So we made a team.”

The Paly Ultimate team is a school club and functions as part of the Bay Area Disc League. It is not a school-sanctioned sport, but rather a club, according senior team captain Alvin Kim.

The team was able to form because  Chris Farina, a new psychology teacher, brought his passion for ultimate to Paly last year.

“I had coached at the schools that I had taught at before,” Farina says. “When I came to Paly, I was looking for a group of students who played ultimate and were interested in playing more competitively.”

Farina has extensive experience with the game of Ultimate as he competed at the collegiate level and currently plays for Mischief, a club team based in San Francisco. Mischief made it to the Triple Crown Tour, where the highest level teams in North America compete.

Equipped with a coach and an official team, students can compete at a higher level now than in previous years. The ultimate team competes in local tournaments against other high school  and practices twice a week to prepare for the five tournaments in the six-week-long spring season, according to Kim.

“Our practices focus mainly on team skills for games, rather than on individual skills …or general fitness,” Farina says. “This is because ultimate is a new sport for most players, so I think it’s more important for them to get a feel for the game and each other.”

Practices vary in structure, but often involve drills for the first half and a scrimmage for the second.

“A typical practice consists of a couple of drills then usually a scrimmage,” Okumoto says. “We try to apply what we learned from the drills into our scrimmages.”

Even though the official season is over, the team continues to practice for the state championship, which is May 18-19in San Luis Obispo. Nine teams will be competing, including Paly, which will be fielding 11 players.

“On Saturday it’s pool play first and then Sunday it’s the championship bracket round,” Kim says.

In addition to official practices, the team plays informally during their freetime.

“Usually we play on the quad during our preps …because we enjoy throwing around,” Zheng says. “It’s less for practice than just to hang out and do something we enjoy.”

Kim adds to this sentiment noting the team’s love of the game.

“Even if we don’t have an official practice, we still love to play,” Kim says.

For Kim, the excitement of ultimate stems from its unique blend of sports.

“It merges the fluency of soccer, the explosion of basketball, and the [tactics] of football,” Kim says.

Okumoto says that despite common perception, ultimate is a challenging sport.

While the sport requires athleticism and competitiveness, the atmosphere among Paly students remains easygoing.

“The vibe is one of the best things about the team,” Zheng says. “People aren’t competitive with each other at all, every good play gets praise, and nobody means it when they make fun of someone for messing up a throw, catch, whatever.”

Okumoto agrees that despite going to the state tournament this year, the team remains laid back, playing for enjoyment as much as competition.

“I would say we have a very fun team,” Okumoto says. “A lot of us like to mess around a lot, but when we have serious practice, or take part in the game, we usually get a lot more focused.”

The laidback, sportsmanlike vibe is perpetuated by the Spirit of the Game [SOTG] guidelines, published by USA Ultimate, which emphasize “the golden rule” and “[having] fun,” among others.

“It creates a level of trust between the teams,” senior Josh Arfin says. “Players don’t want to be the guy who calls a game in their own favor so it causes both sides to have more respect for each other.”

Senior Kevin Lavelle agrees that the SOTG adds an element of trust to the game.

“You can settle any disputes between players amongst yourselves, rather than have a third party,” Lavelle says. “It means most people are really respectful of others and are more open than [they] would otherwise be.”

The team has grown significantly in size this year, welcoming many additions.

“The biggest difference in my mind is that [the team is] a lot bigger,” Zheng says. “Last year’s team fielded eight players or so per tournament max… whereas this year we’ve had 14 plus at some tournaments.”

Despite the influx in players this year, the team still remains largely novice in play compared to clubs that have been established for 10 years or more, according to Farina.

“For a team that’s only been competing for two years, we’re really good,” Farina says. “It’s a pretty good sign that with the time the guys put in we can beat some [higher level teams].”