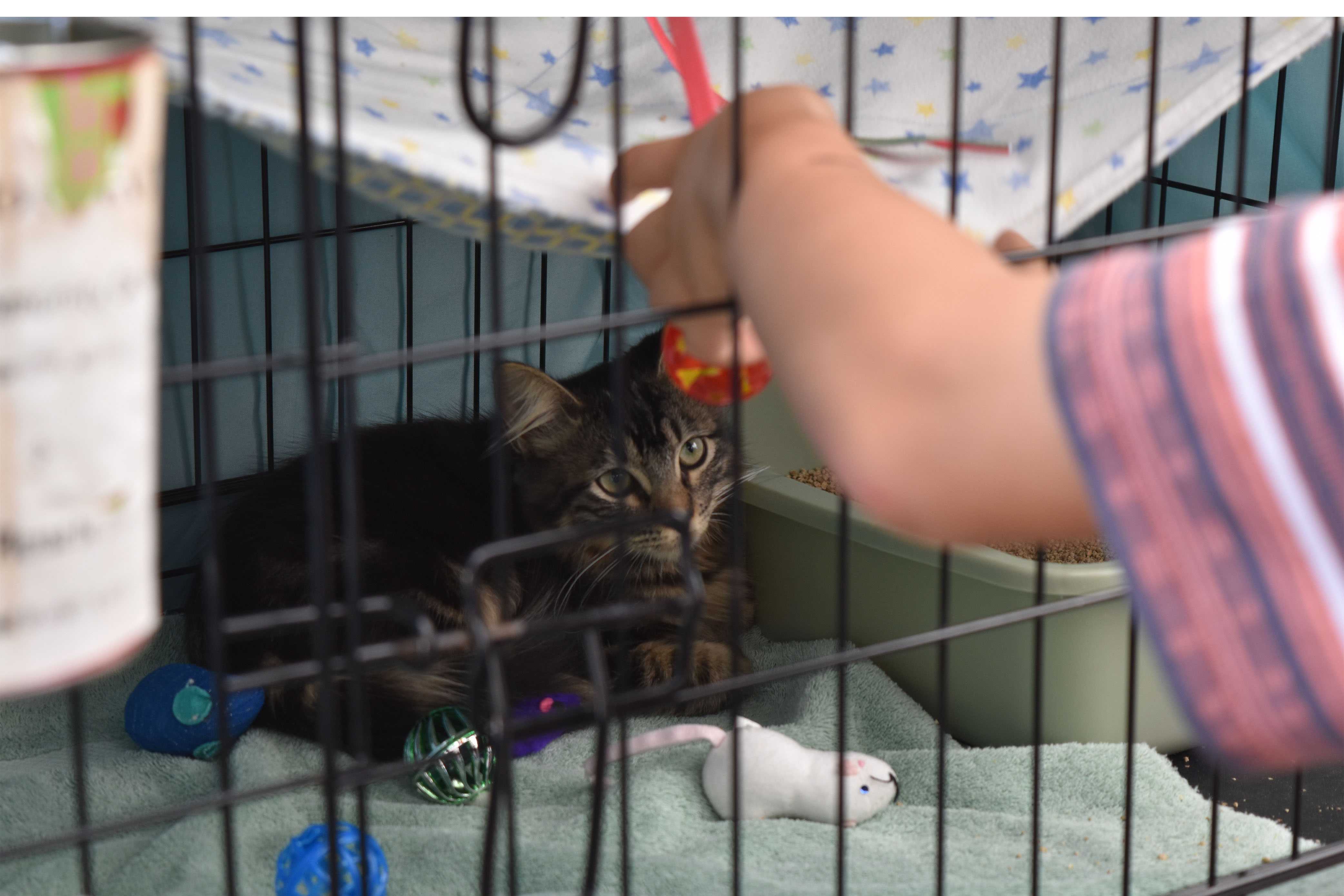 Calypso, a 5-month old calico kitten, licks her nose and paces in her confinement, her glassy green eyes flitting from visitor to visitor. Her fur is speckled with brown and gray spots and one ear droops to the side. Soon she is released, and she purrs as she nuzzles her head into Antonia, one of the founders of Community Cat Rescue. Community Cat Rescue is a non-profit, volunteer-run group dedicated to helping homeless cats find homes, reducing the population of strays in the Bay Area. This organization was started in 2011 by Antonia and Rosemary, who asked that their last names not be used.

“We thought this was kind of an unfulfilled need, that this was a set of cats that nobody was helping,” Rosemary says.

To accomplish its ambitions, the organization relies on fosterers who take in the cats until they get adopted.

“We can’t function without our foster network, since we don’t operate a shelter,” Rosemary says. However, since there are limited resources and volunteers willing to foster cats, the organization’s intake quota is limited.

“The more foster homes we have, if we can support them, the more cats we can save, the more we can take off the street,” Rosemary says. “The interesting thing is, when a person or people adopt a cat …. they’re saving two lives. They’re saving that kitten, they’re giving it a permanent home, and they’re making a space for us to be able to bring another kitten off the streets.”

“The interesting thing is, when a person or people adopt a cat …. they’re saving two lives. They’re saving that kitten, they’re giving it a permanent home, and they’re making a space for us to be able to bring another kitten off the streets.”

However, because one of the organization’s main goals is to reduce the population of stray cats, one of the ways that they handle the issue is by trapping cats, spaying or neutering them, then re-releasing them if they don’t have enough foster homes to take the cat in.

“[There are] colonies of cats that are being fed by volunteers who go out everyday and feed them and provide fresh water and look after them,” Rosemary says. “If they need to go to the vet then the volunteer trappers go out and trap them and get the vet care for them, and then when they’re recovered, put them back in their colony.”

When a new cat is found and rescued, the volunteers must ensure that it is healthy, because according to Antonia cats in colonies — where they are often found — fight with each other. Usually cats come to the organization sick and unhealthy, so they make sure that each cat which comes into their care gets all required vaccinations. They have a system in place to make sure sick cats do not get others sick.

“We put them through what’s called a quarantine when they first come in because we want to make sure that they’re healthy and they don’t carry any diseases,” Antonia says. “All the cats and kittens go to a vet clinic, [and] they get examined again. That’s where they get tested for some of the major cat diseases.”

To ensure the safety of the cats, a team is sent to their home of potential adopters to inspect where the cat will live. The team reviews factors such as other pets, small children, and whether or not the home is next to a busy street.

“Sometimes we get people who don’t know anything at all about cats and we help them, we train them, [and] we instruct them. We’re always available by phone or text for advice, for any problems that come up,” Rosemary says.

The hardest cats to adopt are black cats, presumably because of the common superstition and the scary halloween decorations.

“It gives black cats a bad name when in fact, very often, we find that black cats are among the sweetest, gentlest, friendliest cats,” Rosemary says.

Although Antonia and Rosemary are the leaders, there is a group of dedicated volunteers who help Community Cat Rescue run smoothly. Palo Alto High School senior Elliot Clark has been a regular volunteer with the organization since October 2015, after he adopted his own cat, Sylvie.

“Sylvie brought a lot of happiness to me, so I want to bring that same happiness to other people … through adopting cats to people,” Clark says.

As a volunteer, Clark creates informational fliers and runs an Instagram account to advertise the organization. In addition, he helps set up and run a stand at the California Avenue Farmer’s Market every Sunday.

“It runs from 10am to 1pm, and people are free to come by and see [the cats],” Clark says. “We generally have between three and six kittens on display for people to adopt.”

“Visiting the cats is always kind of heartwarming because they are so sweet and vulnerable,” Hof says. “I wish I could adopt them all.”

Although Clark is graduating at the end of this school year and will have to leave Community Cat Rescue, he plans to create his own similar foundation when he leaves for college and continue helping the feral cat community by giving them loving homes wherever he ends up.

Community Cat Rescue strives to make a dent in the homeless cat population by offering them temporary, and eventually permanent homes. Last year, they facilitated the adoption of about 80 cats to homes around the Peninsula, and will continue this work for as long as they can.

Currently, there are eight kittens that are being fostered and up for adoption. Potential adopters can find them either at the Farmer’s Market or on their website. “It’s [Running the organization] like running a small business,” Rosemary says. “It’s very busy, there’s the same amount of work, there are finances to worry about, there are bills to pay, but the bottom line, the main thing, is the cats and kittens.”