The Story Behind the Smoke: Deconstructing Paly Construction 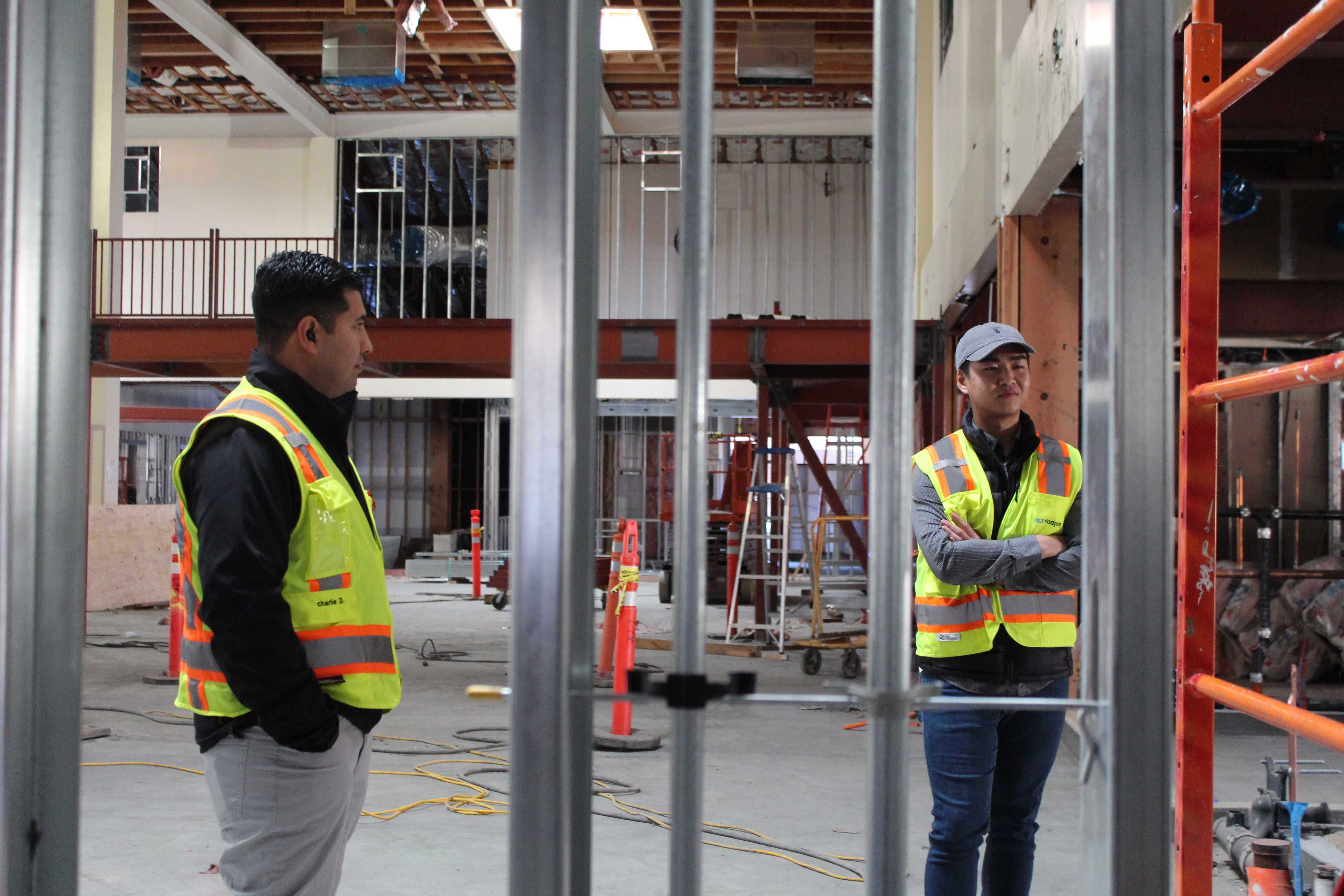 The library has developed an indoor skeleton of towering steel beams, thanks to the work of a framing foreman, Eric Greenhaogh, and his team.

Greenhaogh has a tool belt wrapped around his waist, and his vibrant green vest is stained with dark streaks. He walks over to a box with chalk, which is used to define lines of future walls, and points to one of many streaks painted onto the dusty ground. A score of chalk marks the cutting-edge diagonal wall, infamous among the crew for its difficulty to execute.

“All this stuff you see here is the layout of the walls that are gonna be [built],” Greenhaogh says.

While students only see the black smoke and guarded fences of the construction site, a dedicated team of construction workers, architects and managers works until day’s end.

Each has a different background but they all come together toward a common goal: to build a library that will serve as the creative space for many generations of Paly students to come.

With piercing blue eyes and sharp charcoal eyeliner, MacKinnon’s tall figure commands the attention of any room she walks into. Coupled with her soft, calm voice, MacKinnon perfectly fits construction manager Charlie Diaz’s positive description of her — a highly capable asset to the team. MacKinnon speaks similarly of the construction team. 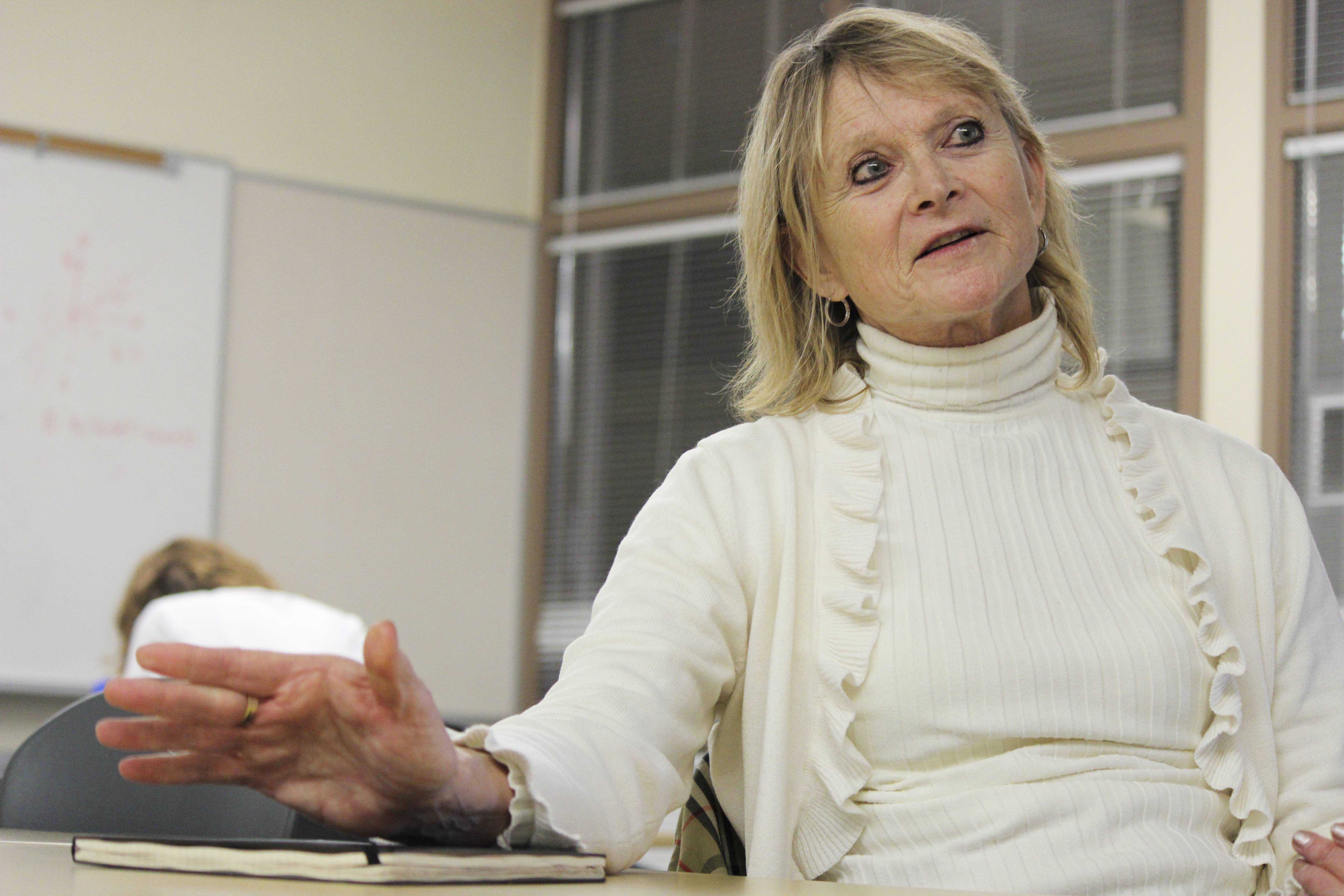 PLANS FOR THE LIBRARY Architect Janet MacKinnon describes process of getting submittals, or shop drawings, approved. “Sometimes [I] get 20, 50 submittals all at the same time,” she says.

“By talking to these guys, you have the chance to inspire them and make them heard and respect them and you’re kind as well,” she says. “Everybody is inspired to do good work, that’s the goal, to have everyone feel really wonderful about the job that they perform.”

Although she has faced gender discrimination while working in the field of architecture, MacKinnon uses these experiences as a way to grow and adapt.

“Yes, there’s a lot of jerks in the world, but it doesn’t do anything to talk about them, it only makes it worse if you talk about bad stuff, so just be positive. You have a choice.”

Her advice for students is simply to work hard. “It’s a small world. If you work hard, do a good job, eventually you will be heard,” she says. “Everybody makes mistakes, so don’t be too hard on yourself when you make a mistake.”

“It’s a small world. If you work hard, do a good job, eventually you will be heard.”

Leading the crew is construction manager Charlie Diaz, a man who wears an easy smile beneath his hard hat and a neon yellow vest over his work clothes.

Although this is only Diaz’s second year in construction management, he worked in architecture for four years after receiving his bachelor’s in architecture.

Diaz’s path to construction and design began long before he received his degree. Both his father and grandfather are architects, which impacted his decision to pursue architecture.

“Every time I was around them I was either drawing on their plans [or] getting them mad because I didn’t know any better,” he says with a laugh. “I thought it was a coloring book and stuff, so I was always around something that needed to be built or something that I could build.”

Diaz’s father has been a major guiding figure for Diaz during his journey through community college, architecture school and in the industry. 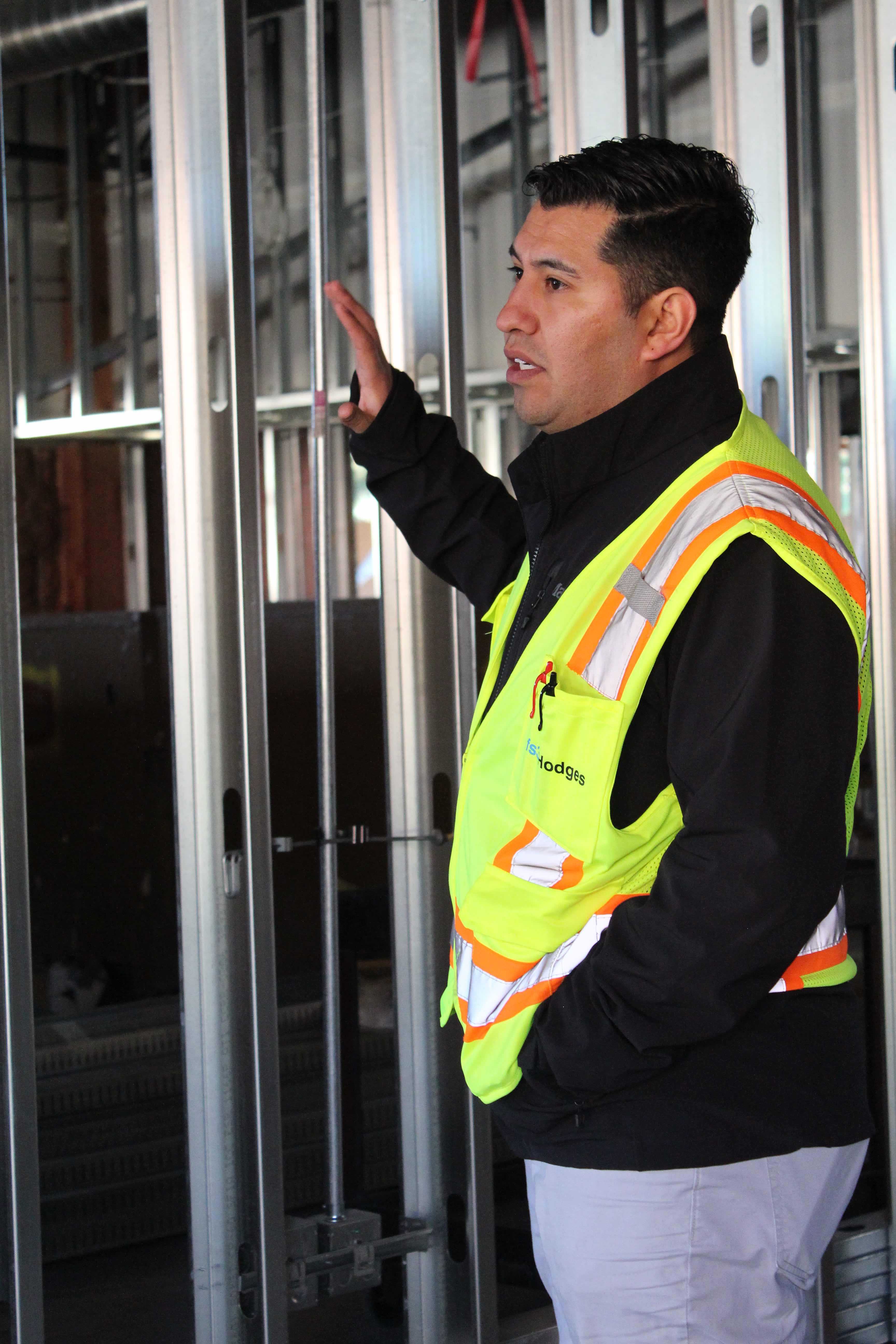 Construction manager Charlie Diaz details out what the future library will look like.

“I was like, ‘how in the world am I going to figure this out, this guy had 30-plus years of experience and I’m barely setting things up on my own and learning from him,’” Diaz says as he relives the experience. “He’s like, ‘Are you kidding me, you can do this, you’ve figured out a lot of stuff in your life, look at where you’ve been.’”

Both of Diaz’s parents pushed him and his siblings to attend school and excel in whatever field they chose to pursue.

“They always said ‘Whatever it is that you do, you’re either the best or you’re going to be part of something big,’” Diaz says.

As the oldest of five children from a low-income background, Diaz’s best option for post-high school education was Harnell Community College in Salinas.

“We didn’t have the ability to say ‘I’m going to go to a four-year way out here and expenses will be absolutely covered.’ Absolutely not, I had to work for everything,” he says.

According to Diaz, community college provided him with the same classes his friends in four-year colleges were taking for a fraction of the price.

For students interested in architecture and design, Diaz cautions them to make sure they’re pursuing architecture because of their passion for it, not for monetary gain. Only a handful of architects are able to achieve that coveted level of recognition and become “starchitects,” Diaz says.

“Whatever it is that you do, do it for passion, don’t do it for money because the money will follow if you do it for passion,” he says. “Pick a path, write down a plan, and work your tail off for it and make sure it is what you want to do every single day of your life.”

Greenhaogh was only a few years into college when his mother passed away. Suddenly, the opportunity to go to school vanished and he was forced to work.

“There was just me and my father in the house — we needed help,” he says. “I was going to school full time, and then after my mom passed it was just too hard. I stayed and worked and starting paying the bills around the house until he [my father] got a little bit more situated.”

Since then, he has gotten married and now has kids. Greenhaogh works in construction to support his kids’ education, but says that he won’t let his son follow in his footsteps.

“I won’t let my son go into the construction business,” he says. “It’s rough and you don’t see a lot of people here who are older. And that’s the problem … there comes a point in your career where you can’t lift all that stuff that’s in there.”

He encourages his kids to find their passion instead of focusing on money.

“I always tell my kids find something that you love to do, no matter whether it pays you five bucks an hour or $100,000 an hour,” he says. “Just make sure that’s what you want to do for the rest of your life.”