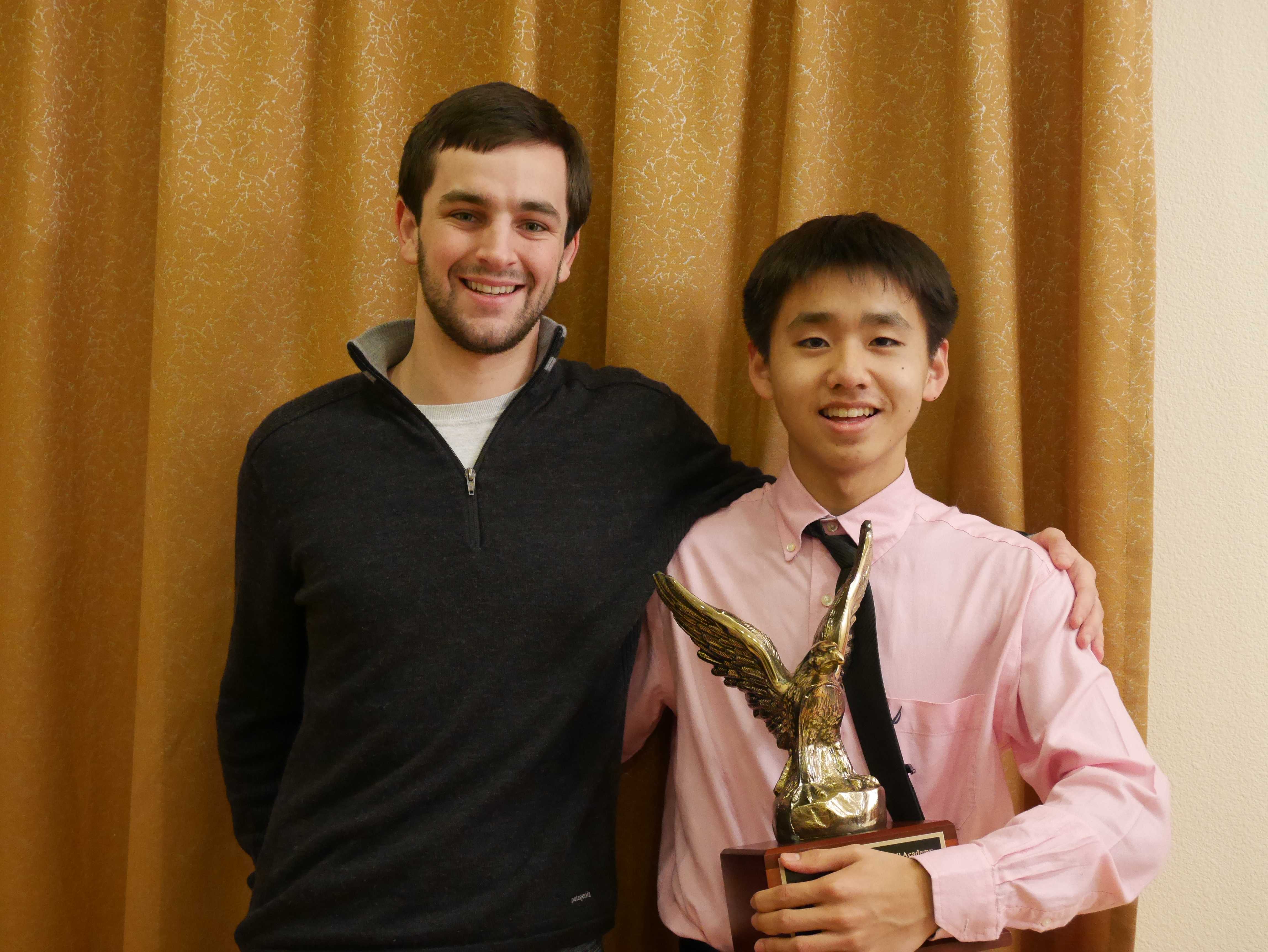 The Star of the NFL

Chen poses with coach and Paly alum Alex Carter after winning a tournament. ““The biggest thing with Travis is that he is very well-rounded as a debater,” says Carter. “He doesn’t specialize in one type of argument over the other.”

According to Jennie Savage, the director of speech and debate at Palo Alto High School, the qualities of a good debater are few: balance, coachability, intellectual flexibility and, most importantly, drive. Senior Travis Chen has gained recognition in the National Circuit Debate world for demonstrating these qualities on the podium.“Travis Chen can do 20 things at once, and he looks like he’s off in space.” Savage says. “But he gets back to you and he answers 20 of the things that you’ve said in order, completely structured, and not only that, he’s pushed it five steps beyond. He’s one of a kind.”In the January 2014 Victory Briefs Tournament, a national tournament in Los Angeles, Chen went home undefeated in 12 debates.“As he has matured Travis has developed stronger sensibilities about the strength of his arguments and how to deploy them strategically,” says Adam Torson, the curriculum director at the Victory Briefs Institute. “As he faced better and better competition, his level of preparation ramped up accordingly.”Despite his involvement in cello, basketball, frisbee, running, and ASB, Chen says that debate has been a large part of his life from a young age.

“In eighth grade I joined our debate club, and immediately I really enjoyed it.” Chen says. “It has just been something I’ve been doing for a while since it’s something I’m relatively good at, so I can enjoy my success and enjoy the material.”

Despite starting his career in 8th grade, Chen continued to pursue his debate career more seriously in high school, after some encouragement from Savage.

“I remember seeing him when he was in eighth grade and he just had this spirit about him,” Savage says. “I remember stopping him and saying: ‘When you come to Paly, I want you on my debate team.’ And before you know it, I saw him walking in the door and I was like: ‘Yes! I got Travis Chen’! ”

Through spending hundreds of hours of hard work cultivating his natural talent for debate, Chen has continued on to be nationally ranked in the category of Lincoln­-Douglas debate.

“A lot goes into achieving the level of success that Travis has,” Torson says. “He is an incredibly hard worker and very intelligent. … I would also say that Travis is exceptionally strong at recognizing and articulating the way that different arguments deployed in a debate round relate to each other.”

Paly debaters participate in the National Forensics League, also known as the NFL. The NFL usually settles into two categories: persuasive and circuit. Persuasive debate looks to compel the judges through strong support and a solid thesis; circuit debate usually foregoes persuasion in favor of strategic thinking and argumentation, in which Chen specializes.

“I just really like going into a round and thinking of arguments on the fly,” Chen says. “It emphasizes quick, analytical thinking, and strategic choices, which I really like … I feel like it just makes me more educated in a form that I actually kind of enjoy.”   v