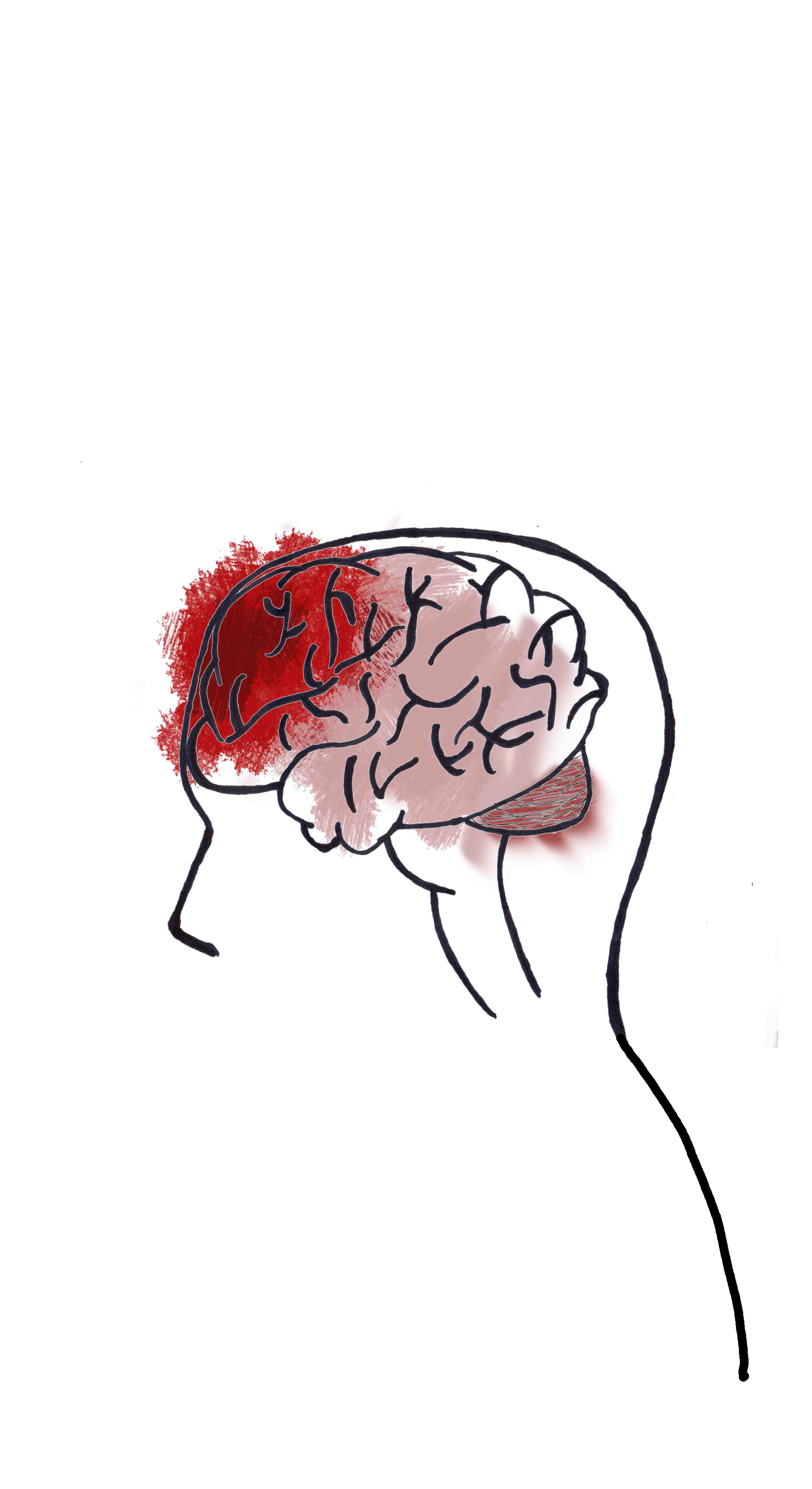 The (Second) Impact: The risk of athletes sustaining multiple concussions

The last image she saw was the spherical yellow ball hurtling toward her. In her very last movement, her body tensed as she prepared for the inevitable impact. And her last thought? Block the goal.

Then, for split second, Palo Alto High School water polo player sophomore Al Lee could only hear one noise: the sharp, loud crack created by the ball—traveling at approximately 30 miles per hour— making contact with her skull.

Lee sank, feeling the cool water envelop her whole body as she tried to shake off the pulsing sensation of pain traveling through her head.

Lee punctuates her recollection with a laugh, and excitedly tells me, “At least I blocked the ball.”

According to Lee, she resurfaced with a smile on her face to reassure concerned teammates, and kept participating in the drill, hoping her lingering headache would soon cease.

“I had a headache for a week,” Lee said. “I started sleeping a lot; I was taking naps during the day.”

After five days, Lee’s mother convinced her to see a doctor. Lee was diagnosed with a concussion, and was not permitted to play water polo or engage in challenging school work for another week.

The doctors decision may have made all the difference for Lee.

Lee was cleared by her doctor to return to playing water polo after recovering from her concussion and presenting as asymptomatic. On the very same day of the clearance, Lee sustained a second concussion at practice.

Luckily, due to a strict six stage recovery regimen widely used throughout the medical community, Lee had no lingering symptoms from her previous concussion, obtained two weeks prior. Though Lee was disappointed that she had to stay out of the pool for another week, she fortunately did not have to deal with any further complications.

“We want to make sure every athlete returns to play, safely.”

A concussion is defined — in the book “Minor Emergencies” —  as a change in one’s mental status due to a mild traumatic brain injury. Most concussions result from a blow to the head or violent jostling to the body.

According to Paly Athletic Trainer, Justine Iongi, the direct cause of a concussion stems from the impact creating movement within the head. The brain hits the skull, resulting in a brain trauma.

Every concussion case is unique; however, the Center for Disease Control states that common symptoms include nausea, balance problems, changes in mood, and irregular sleep patterns.

According to Lee, an additional symptom she experienced was cognitive difficulty. For a week she struggled with her homework, especially math and chemistry problems.

Despite these symptoms, Lee waited days to have a concussion test. However, Iongi warns that athletes should acknowledge the severity of their injuries, instead of casually dismissing them.

“A lot of times, people just say ‘oh, I just got my bell rung’ [dismissing the severity of the injury] which is terminology we need to change,” Iongi said.

However, Iongi hopes to change Paly athletes’ reactions to, as well as perception of,  concussions.

“We have been advocating, especially at the high school level, [for students to recognize the effects of] Second Impact Syndrome,” Iongi says. “It is when you sustain a concussion and you don’t get adequate rest and recovery time before you sustain another one.”

According to Iongi, once an athlete suffers from a concussion, the athlete becomes three times more likely to experience another. This is partially due to the fact that the impact required to cause a concussion declines after the first impact.

However, most high school athletes remain unaware of the severity of SIS. If an athlete endures a concussion while still grappling with symptoms of a previous concussion, the  effects on the brain could be fatal.

According to a study published in the Western Journal of Emergency Medicine, 39 percent of  high school and college athletes who suffered catastrophic injuries had played with residual symptoms of a prior concussion.

SIS was first coined to describe a medical condition in 1984, according to The Sports Medicine Research Manual. Though SIS rarely occurs, the consequences can be devastating.

Scientists believe that SIS is caused by impaired autoregulation to the brain, resulting in a cerebral edema and a rapid increase of intracranial pressure. In simpler terms, this translates as a lack of controlled blood flow throughout the brain. Blood vessels then engorge, causing brain swelling and a sudden increase in pressure within the skull.

All immediate treatment is directed towards relieving intracranial pressure; however, the mortality rate is approximately 50 percent, and the athlete can die within minutes of the head trauma.

The morbidity rate, or the prevalence of athletes sustaining lasting effects of the syndrome, approaches 100 percent of all surviving patients.

Iongi uses the example of Preston Plevretes, a college football player who, in 2005, sustained a concussion in practice. One month later, Plevretes played in a game — despite lingering symptoms from his previous head injury —  and sustained a second concussion. As a result, Plevretes spent months in the hospital, and despite multiple surgeries, he still struggles to talk and has failed to gain back full physical capacity.

Due to the tremendous consequences of concussions and other sports related injuries, Iongi emphasizes the importance of high schools hiring Athletic Trainers, and expresses that she is very pleased that both PAUSD high schools have full time athletic trainers.

This expertise allows for Paly athletes to undergo proper protocol after sustaining a concussion.

“It [the brain] is not a muscle; a muscle can regenerate… you only have one [brain],” Iongi tells athletes. “We want to make sure every athlete returns to play, safely.”