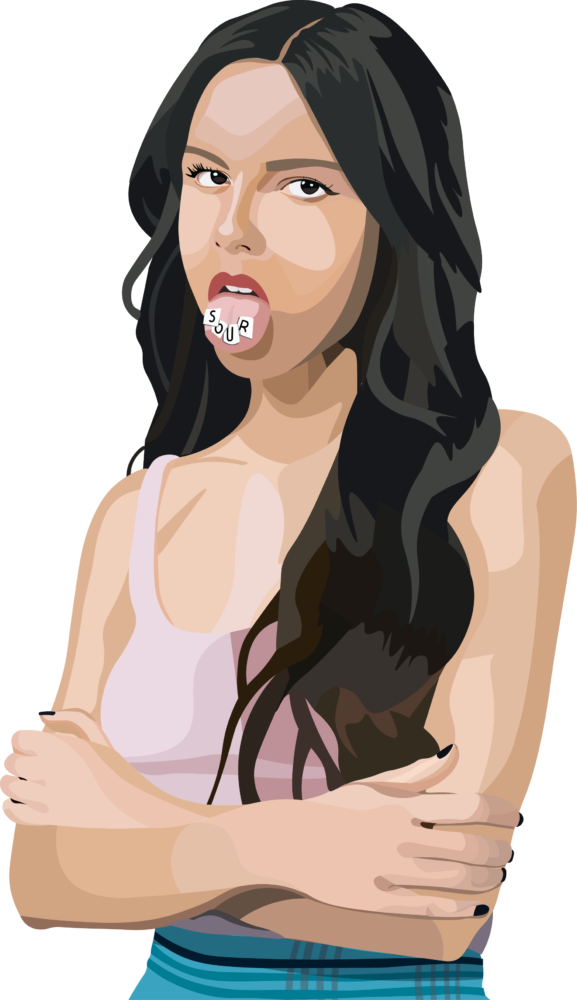 The power of ‘sour’: Olivia Rodrigo’s rise to teen stardom

It was just another press briefing at the White House. Crowds of reporters huddled around the podium, where Press Secretary Jen Psaki was introducing a special guest. Perhaps one might have expected a medical professional or national security advisor. But on July 14, onto the podium stepped none other than 18-year-old singer-songwriter Olivia Rodrigo. Invited to promote COVID-19 vaccinations. Rodrigo sat down for a Q&A with Anthony Fauci, director of the National Institute of Allergy and Infectious Diseases, and even had a photo op with President Joe Biden.

“I am beyond honored to be here today to help spread the message,” Rodrigo said as she spoke to the press.

This curious episode is perhaps the best encapsulation of Rodrigo’s recent stardom. A young woman who was largely unknown to the general American public outside of a few shows on Disney Channel now had an album perched atop the Billboard Hot 100. In only a few short months, Rodrigo had established herself as a ubiquitous icon of Gen Z.

Rodrigo first broke into mainstream Hollywood on Disney Channel’s “Bizaardvark” before landing a role in the Disney+ show “High School Musical: The Musical: The Series.” Rodrigo showcased her vocal talents through the show’s soundtrack, catching the attention of the nation and many Palo Alto High School students.

“The first time I heard of her was not [through] her music, it was when she was on Disney Channel … many years ago,” junior Grace He said. “So when I first came across her ‘Driver’s License’ song on YouTube, I was like, ‘Oh my God, it’s her.’”

“It’s super cool that knowing her music is a shared experience for a large portion of our generation.”

In January, the release of the hit single “Driver’s License” propelled Rodrigo into the global limelight, racking up 21 million streams within the first three days after its release. It soon became clear that pop ballads were not the only tunes in Rodrigo’s arsenal; the 2021 release of her full-length album “SOUR” featured songs dabbling in alternative, acoustic and rock genres. Teen insecurities, anxieties and, of course, heartbreak, are shamelessly explored by Rodrigo, drawing many fans to the vulnerability and universality of her lyrics.

“I love jamming out to ‘SOUR’ in the car with my friends and have a lot of happy memories associated with those songs,” senior Samantha Yamashita said. “I think it’s super cool that knowing her music is a shared experience for a large portion of our generation.”

Over the past few months, Rodrigo’s influence has expanded beyond the music scene, with her retro-inspired aesthetic becoming an iconic presence in fashion and lifestyle, particularly on social media platforms.

“Her fashion to me is very Y2K, which I know that people really like right now and everyone’s saying that [that style of] fashion is coming back,” junior Sofia Wong said.

Wong said she believes a considerable amount of Rodrigo’s intalnetcreased influence has come from her songs’ popularity on the social media platform TikTok.

“People on TikTok, they all used her songs for a while,” He said. “They [TikToks] make small creators become really famous.”

“It’ll be interesting to see if she can keep up the hype or if she’s sort of one of those one-hit wonder people.”

Rodrigo has undoubtedly created a unique presence in the current music scene, but many question whether her fame is oversaturating this space.

“I get so many Spotify ads for her, she’s just portrayed as the up-and-coming, rising ‘it’ girl, someone who’s just broken into the industry and is new in town,” junior Anna Thieman said. “I think they’re pushing her image.”

More than just a case of “Deja Vu”?

In many ways, Rodrigo’s rise to prominence mimics her Disney-to-pop star predecessors of the early 2000s. Icons such as Britney Spears, Christina Aguilera, Demi Lovato and Miley Cyrus built their careers by supporting — and later subverting — the Disney machine with rebellious songs to wipe away their “good girl” images.

But in the age of the internet, Rodrigo stands out. Fresh off her Disney debut, Rodrigo has no qualms  about exploring gritty, uncensored subject matter in her music. Rodrigo (and her producer, Dan Nigro) seem to understand that authenticity in the online era is more appealing to fans than a squeaky-clean image. Rodrigo isn’t an unreachable idol or a teen tragedy; she’s just a girl in her bedroom writing songs about how she feels.

Ultimately, many believe that Rodrigo is undoubtedly a talented and influential artist, but it remains to be seen whether she can remain a chart-topper.

“It’ll be interesting to see if Olivia Rodrigo can keep up the hype,” Thieman said. “Or if she’s sort of one of those one-hit wonder people who just release an album, it goes crazy and then dies down, and no one cares about her anymore.”