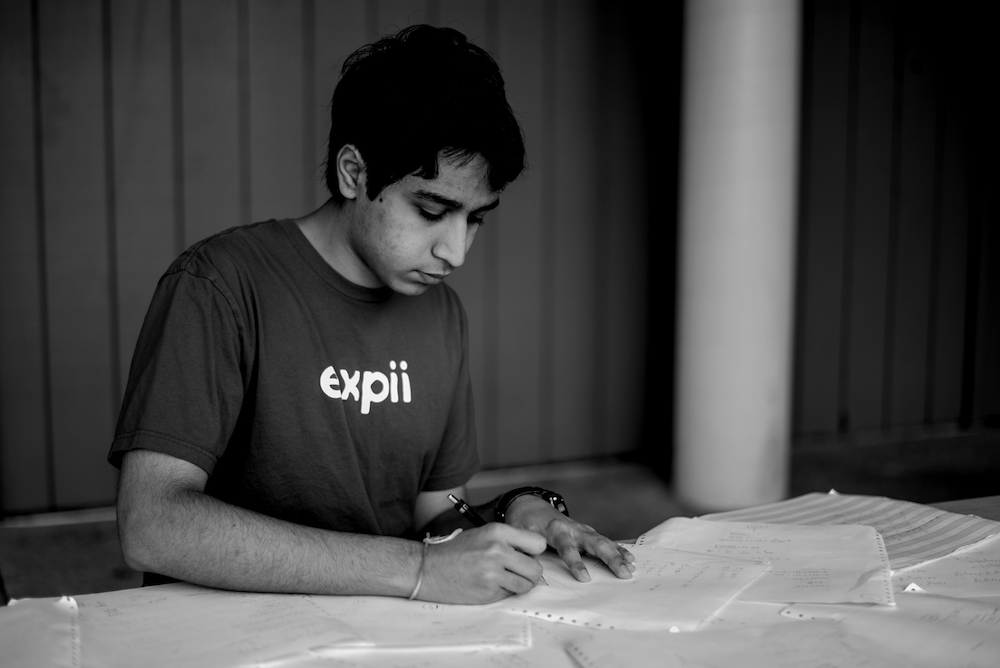 The Man, The Math, The Legend: One student’s outstanding math career

It’s an easy enough label, at least, for an individual who has disregarded the standardized path of school math courses — taking AP BC calculus as a high school freshman and multivariable calculus as a sophomore — and marked himself as the third best high school mathematician in the country.

But being one of the best in the nation doesn’t mean much to Singhal, who sees ranking as an artificial measure.

“You can’t rank people,” he says, conclusively and absolutely. “There’s so much variance that in the end, it all comes down to the luck of a single problem.”

Either way, his accomplishments speak for themselves. At the 2016 and 2017 United States of America Mathematical Olympiad, a competition between hundreds of thousands where even qualifying is considered a tremendously prestigious award, Singhal was one of 12 winners. And at the 2018 Romanian Master of Mathematics, an event known as one of the most challenging international high school mathematics competitions in the world, he tied for first.

Singhal also recently qualified for the International Math Olympiad USA team in May 2018 after a nearly year-long selection process. He took a series of six tests throughout the school year, each one eliminating hordes of students until only himself and five other of the most talented mathematicians in the country remained.

Not many would find beauty in math, but not everyone sees math the same way Singhal does. He admits to being fascinated by numbers, a fact that becomes rather obvious when a mathematical theory comes into conversation and causes him to start describing the intricacies related to it in a continuous stream of enthralling, thoughtfully derived information.

“It’s hard to put into words,” Singhal says. “It’s built up from the simplest of concepts; you build it up from simple facts. But from simple things you can get complex structures and amazing, elegant results.”

Singhal doesn’t have much else to say in regards to the reasons behind his passion for math. And he has even less to say about his proficiency in the field. Something along the lines of “pretty good,” is usually all he will say when asked how it feels to be one of the top mathematicians in the country, though sometimes he’ll add in a shrug or a brief laugh.

“Math is the thing I want to think about if I have nothing else to do.”

He’s not one to self-reflect — to Singhal, it doesn’t really matter why he loves math, just that he can do it, and he does a lot of it.

“It is probably the biggest part of my life,” Singhal says. In addition to working on practice tests and complex problems online, simply noticing the involvement of math in day-to-day life can ignite a thought regarding math. “Math is the thing I want to think about if I have nothing else to do.”

Spending so much time and energy on math does, however, make failure draining. Frustration is especially high when he is stuck on problems for hours at a time without any significant progress. And pressure from family, peers and mentors to do well does not exactly contribute anything positive.

“People expect me to be able to solve problems,” he says. “At the end of the day, you never know how well you’ll do.”

Despite these pressures, Singhal still has a strong and seemingly never-ending passion for math. There are many rewarding parts, but according to Singhal, the most rewarding part is “the little burst of excitement when something works or something gives.” He recounts, with a smile on his face, that whenever he makes a small breakthrough “there’s a surge of excitement.”

There are numerous factors that have led to Singhal’s success as a mathematician, but he believes the main reason is interest.

“If you really like something you can do anything you want,” Singhal says.

In a school known for its pressure and academic rigor, it’s refreshing to hear a voice like Singhal’s.

“I think it’s really important to do what you really like to do,” Singhal says. “Often I see a lot of people doing things that they don’t necessarily want to be doing for the sake of other people rather than themselves.”