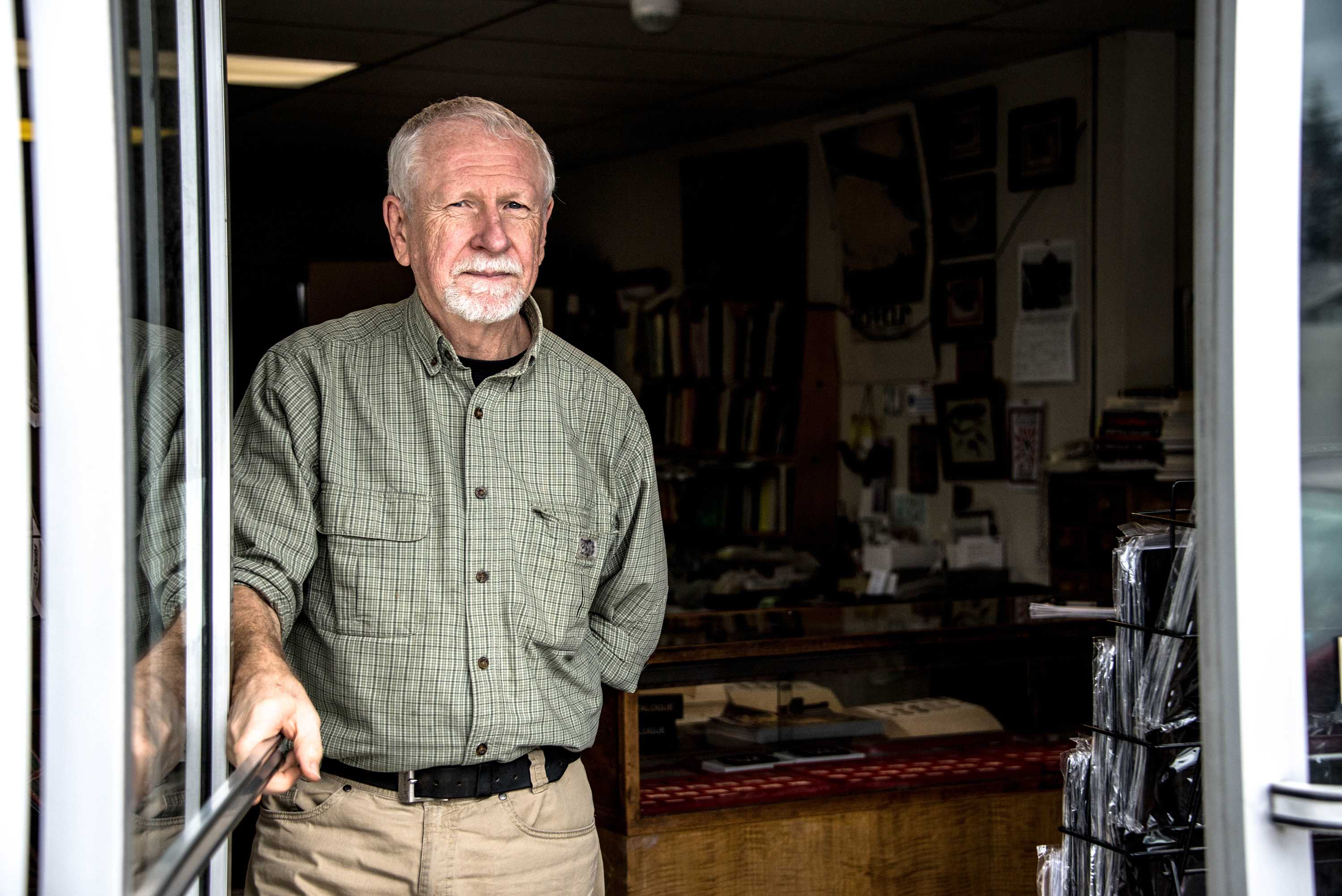 To the muffled tune of a banjo on the radio, Paul “Rudy” Schroeter quietly and methodically sorts through a stack of letters. He’s not concerned who they are addressed to or who sent them. Instead, his spectacled eyes hone in on the upper right corner of each envelope in search of the postal stamp.

Schroeter works with all but one of the blinds closed. Often, a customer won’t stop by for hours on end. The neighboring clothing gallery is dilapidated and the tar of the adjacent parking lot is cracking, with no sign of repairs coming any time soon. Yet Schroeter’s business, Treasure Island Stamps and Coins, is very much alive on the El Camino. If you venture past the blinds, rustling the door chimes as you enter, you’ll encounter row upon row of coins and countless piles of  stamps. These are the vestiges of a once-commonplace American pastime now struggling to establish its roots in the generations to come.

Schroeter is part of the old guard. As the first and last owner and sole employee of Treasure Island, he has built up a collection over the past 48 years that, according to him, is unrivaled in possibly the whole of Northern California. He has transformed a childhood hobby, coin by coin and stamp by stamp, into a collection that serves as both an atypical museum and a job that gives him a sense of purpose each and each time he steps inside his shop.

Yet for all the time Schroeter devotes to the business, he worries that there is no younger generation of collectors to replace people like him.

“The demographics have changed,” Schroeter says. As he reflects on the changing times, a twinge of sadness flickers in his eyes. “There’s very few people starting off collecting anything. There’s not many people building models anymore. A grandparent will give one [model to build], but it’s mostly the electronics now.”

From Hobby to Lifestyle

Schroeter still remembers the first time he laid eyes on a coin collection — his grandfather’s, a keepsake from World War I — encased in a polished metal box. He was only 8 years old at the time, but he was engrossed in finding just where each of the small metal disks originated.

Schroeter’s first foray into stamp collecting likewise came from an unexpected source. Nestled in between the pages of an old radio schedule book was the incomplete collection of an unknown owner, which Schroter decided to make it his own.

But collecting, especially with the goal of growing a store’s inventory, is a game of patience. One must resist the urge to spend on luxuries that take away from fueling the business. Since he was a child, Schroeter has been honing this sense of vigilance. Growing up in Los Angeles, every passing streetcar represented an opportunity to visit the local coin shops and slowly learn what value looked like, coin by coin.

“You can’t be greedy,” Schroeter says. “You have to build up an inventory over the years, not take much money out of the business and keep putting money into the business. You can pull a little out to live on, but not much more than that.”

For those who do not share an interest in the trade, this careful balance of business and life would be laborious. But for Schroeter, running Treasure Island is a way to channel his devotion to his hobby into his work. It’s a privilege he’s able to enjoy, in part, because of the unique niche he has carved out with patience, experience and, most crucially, being in the right place at the right time. For Schroeter, this luckybreak arrived at Town and Country Village, over 48 years ago.

“The rent was $175 a month at that time,” Schroter says. “I don’t think you could rent a parking space up there for that anymore.”

A Duty to the Community

On this particular day in the shop, a woman has stopped by, carrying the remains of her father’s stamp collection ripped apart by robbers in her apartment last week. She is trying to piece it together once more, in the hopes that the robbers had also come to Treasure Island looking to sell off parts of her collection.

The scene plays out like it’s scripted — the two exchange pleasantries and Schroeter determines, by cross-referencing the woman’s account of the collection’s contents with his extensive records, that the burglars have not yet visited his store. The woman is disappointed, but Schroeter assures her the collection will be found in time. She thanks him, and as the bells on the door chime her departure, Schroeter reflects on the role of his store in the community at large.

As a former Boy Scout and an Army veteran, Schroeter values duty and service deeply. He sees his shop as an abstract history museum, one where he can continue to play a role in carrying on his neighborhood’s sense of community. More importantly, it provides him with a means for passing on the spirit of initiative he took when he started his business so long ago.

“This gal has been coming in for about two years,” Schroeter says. “This was her father’s stamp collection, and she’s bringing them [the stamps] in as she clears out the house. She’s not a collector herself, but she’s using the money for a little bed and breakfast place. I knew her dad real well, and this is what her dad would have liked to see. The stamp collection that he left [for] her is going towards something that’s not just cash in the pocket, but it’s going to something that’s going to make her sort of independent and her own boss.”

While Schroeter and others like him have played a huge role in keeping collecting alive, the American government has also had a sizable hand in maintaining the hobby. During the Great Depression, jobs were hard to come by and people had time on their hands in immeasurable quantities. Franklin Delano Roosevelt, in talks with the American people through his personal fireside chats, saw stamp collecting as yet another way to connect with the people. Replacing traditional figures on the face of postage stamps, Roosevelt showcased powerful images of hope and optimism, while subtly conveying the strength of the federal government. Starting a collection was simple — a dime could get you a starters pack at a local gas station, while supermarkets and dry cleaners all stocked a supply of stamps. And when Roosevelt publicly indicated that he found solace from his stressful presidency through collecting, he ignited what is now considered the Golden Age of stamp collecting that flourished for nearly half a century.

When the boom of the 70s began to die out, the U.S. Postal Service and U.S. Mint combined in an effort to re-supply kindling to a dying fire.

“There just wasn’t enough new collectors coming in,” Schroeter says. “And then the post offices just started cranking them [stamps] out. Instead of making stamps for just basic use, they started trying to print lots and lots of stamps.”

The U.S. Mint played a vital role in the resurgence of coin collecting by unveiling limited edition sets like the 50 State Quarters in 1997, arguably the most successful numismatic program in history, as $3 billion worth of quarters filled the displays of both casual and serious collectors.

Despite these actions, the number of collectors has declined over the years. Still,  Schroeter feels as though people will return to collecting.

“I think [by not collecting,] you’re losing your chance for getting within yourself and just concentrating on something,” he says. “It’s kind of when you get into a really good book. Suddenly you look up and you realize it’s 2:30 in the morning… And it’s the same thing with these hobbies. You kind of lose yourself in it.”

Schroeter is not really dreaming of a return of the collecting boom of the 70s, but the possibility of a revival is growing. He’s already seen 40-year-olds rattle the bells on the door of his shop, and come in looking to grow their own collections.

“The way I look at it … later on in life when, either they [people] retire, or they get their family settled, or their kids finish college… they realize that there is only so much golf, fishing and much yard work they can do, and they don’t want to sit there and watch television and become a couch potato,” Schroeter says. “So they’ll say, ‘Oh, I remember stamps and coins, that was kind of cool.’ And hopefully that will lead to more collecting in the future.”

Behind the casing and collecting guidebooks lies an old chest, filled to the brim with pieces of stamped envelopes. Schroeter doesn’t always have the time to  inspect every stamp in a stack of letters, so he tosses what he can’t get through into this old-time war chest.

And for as long as Schroeter lives, the treasures of Treasure Island will remain buried and undiscovered inside this very box. While the rents continue to rise and the Ventura neighborhood undergoes a house by house makeover, Schroeter, like the banjo on the radio will continue to sort through the appraisals at a steady rhythm. He will continue to refill the treasure box as collectors young and old rummage through, some discovering a rare stamp, others discovering a hobby that lasts a lifetime at the meager price of two stamps for a penny. And he will continue to do so until the day when Treasure Island’s race to outlive the last-standing buildings of Ventura comes to a halt, for when Schroeter passes, so will the shop. As much as the collection is a business, it has evolved to become a part of him.

“I’m taking it with me,” he says. “I won’t let go of it. I’ll be kicking and biting and scratching to hold onto it. I’ll say ‘You will not! You will not take this, I’m taking this to my grave.’”