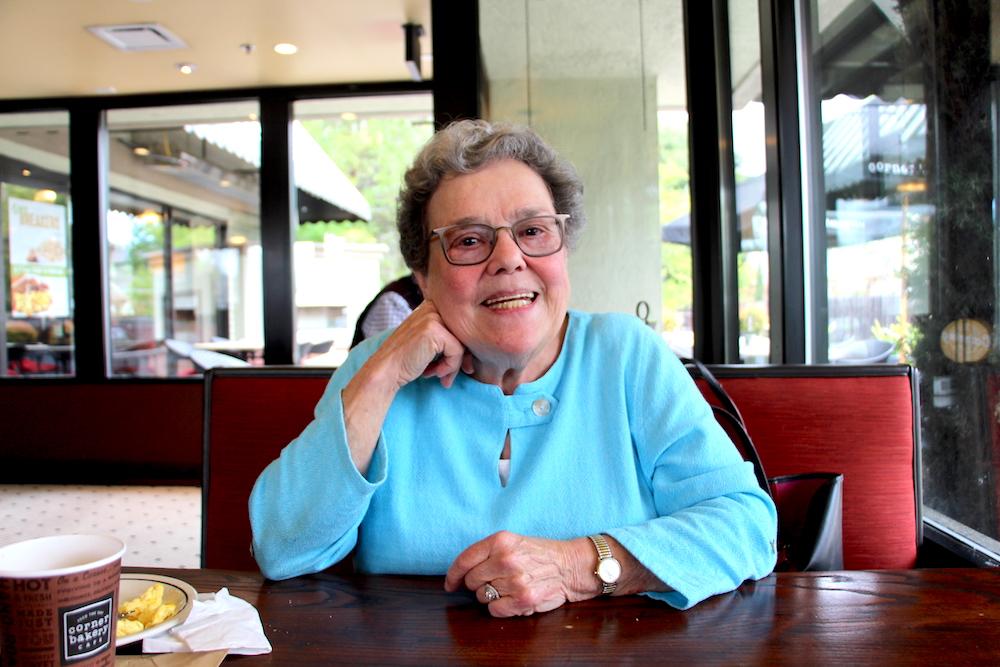 The League Wants You: The Woman Behind the 100 Percent Mission

Jeannie Lythcott lowers her voice, makes a stern face and draws her shoulders back in imitation of the judge who sat across from her 50 years ago on the day she became a citizen of the United States. Her eyes glimmer as she recalls the exact words the judge spoke to her. Clearly, this is a story that she has told many times before.

“And so then he says, ‘Tell me what you know about the executive branch,’” Lythcott says, chuckling at the memory. “In all sincerity, at 28 years old, I looked across at this gray-head judge and I said to him, ‘You mean everything I know?’”

She leans in closer as she narrates, as if daring an incorporeal judge to accept her challenge.

“He said, ‘Why don’t you just start and I’ll tell you when to stop,’” Lythcott says. “So I started, and I went on. He never asked me another question.”

Listening to her accounts of her English upbringing, her career as a science teacher in Ghana and her ultimate journey to the United States, it is clear that the fiery tenacity of Lythcott’s youth is still burning as strong as ever.

If anything, stronger than ever.

Now the Co-Director of Voter Services at the League of Women Voters of Palo Alto, Lythcott has set her sights on a new challenge: registering 100 percent of eligible Palo Alto high school students to vote before the June 5 election.

Born in a tiny coal-mining village in Yorkshire, England, Lythcott grew up hearing stories of the hard work in the coal mines. Though her family was poor and could only afford to pay for what was necessary, when Lythcott was accepted to Manchester University, the English government covered all her expenses, including boarding, transportation and books.

“I was the second person in my village ever to go to university,” Lythcott says. “So the fact that my government, my country, had educated me for free, for nothing, still means an awful lot to me.”

“I saw in this country this unique form of government … with the unstated promise that anybody, regardless of how humble their origins, could rise to another place.”

Having discovered her love for the sciences at an early age, Lythcott chose to pursue a degree in botany and chemistry. Soon after graduating from Manchester University, she took a job as a science teacher at a nursing school in Ghana, West Africa.

There, she met and fell in love with George Lythcott, an American physician heading a U.S. effort in West Africa as a part of the World Health Organization’s plan to eradicate smallpox. As she would be coming back to the U.S. with him later, she decided to apply to become a citizen and was required to take both a test and an oath of citizenship.

“I’d married an American, but I needed a reason more than that to turn my back on family, queen and country,” Lythcott says. “I saw in this country this unique form of government … with the unstated promise that anybody, regardless of how humble their origins, could rise to another place.”

Finding power within the system

Though passionately drawn to the idea of a true democracy, Lythcott was not blind to the injustices that still existed within the American system. As an immigrant, a female educator and the wife of an African American man during the ‘60s, Lythcott faced many prejudices.

“As a part of a mixed race married couple in 1966, when we got married, we were breaking the law in six states where miscegenation [interracial marriage] was not allowed,” Lythcott says.

Yet instead of feeling discouraged, Lythcott saw these challenges as opportunities to utilize the tools and powers given to the people to “improve, preserve and protect democracy.”

From her unique standpoint as an American citizen, Lythcott’s passion for change and reform grew. But to Lythcott, the most essential part of civic responsibility is expressed within the voting booth.

“That [voting] is how people get power in this government of the people, by the people and for the people,” Lythcott says. “You have to know what is going on, there has to be people who are running for the same kind of values that you hold and then you have to actually vote.”

Welcome to the League

After over 40 years of teaching, Lythcott retired from her job as a Science Instructor at the Stanford Teacher Education Program and turned her attention towards the League, which had been in the back of Lythcott’s mind since the ’70s.

“I wanted to tackle provoking issues … fighting voter suppression by increasing the number of people who actually go to vote,” Lythcott says.

In 2014, Lythcott joined the Voter Services team in the League, where she worked alongside other women from Palo Alto to register high school students, the homeless population, veterans and newly naturalized citizens. Along with increasing registration, she helps the League organize special candidate forums where the candidates appearing on local ballots convene in a public setting to answer questions and objectivity is ensured.

After only three years of working in the League, and right after the 2016 election, Lythcott was appointed as the Director of Voter Services and subsequently appointed Kathy Miller to be co-director with her. In the first couple months as co-director, they succeeded in knocking the League off its feet with her 100 percent plan.

“We had only before ever cared about the big high schools, Paly and Gunn,” Lythcott says. “What I wanted to do was to uncover where all the Palo Alto teens are.”

In past years, the pattern for the League was to register around 40 students from each of the two Palo Alto high schools. But out of a senior class of 450 students, this number was insufficient for Lythcott.

“Some people laughed and said, ‘Jeannie, you’ll never make it,’” Lythcott says. “And to them I said, ‘That’s not the point. The point is, if you don’t name it, you don’t work towards it.’”

“This generation has the opportunity to shape this nation in ways that are important to this generation. But it won’t happen unless they vote, get educated and stay informed.”

This year, the League was determined to delve deeper. This meant contacting continuation schools and private schools, as well as looking into the homeschooled and homeless student populations. At every school that would allow it, they organized assemblies to speak about the League’s work and set up voting registration booths on campus to reach as many eligble high school voters as possible.

As of now, the League has registered and preregistered around 1,000 high school students in Palo Alto. While Lythcott acknowledges that her plan was not executed perfectly, as a pilot run she believes they did a “pretty damn good job.”

Given the constant headlines, scandals and changes surrounding the current administration, and after seeing the incredible anti-gun violence movements organized by youth, Lythcott stands by the notion that our generation has a new and exciting responsibility.

“This generation has the opportunity to shape this nation in ways that are important to this generation,” Lythcott says. “But it won’t happen unless they vote, get educated and stay informed.”

Learn more about the League