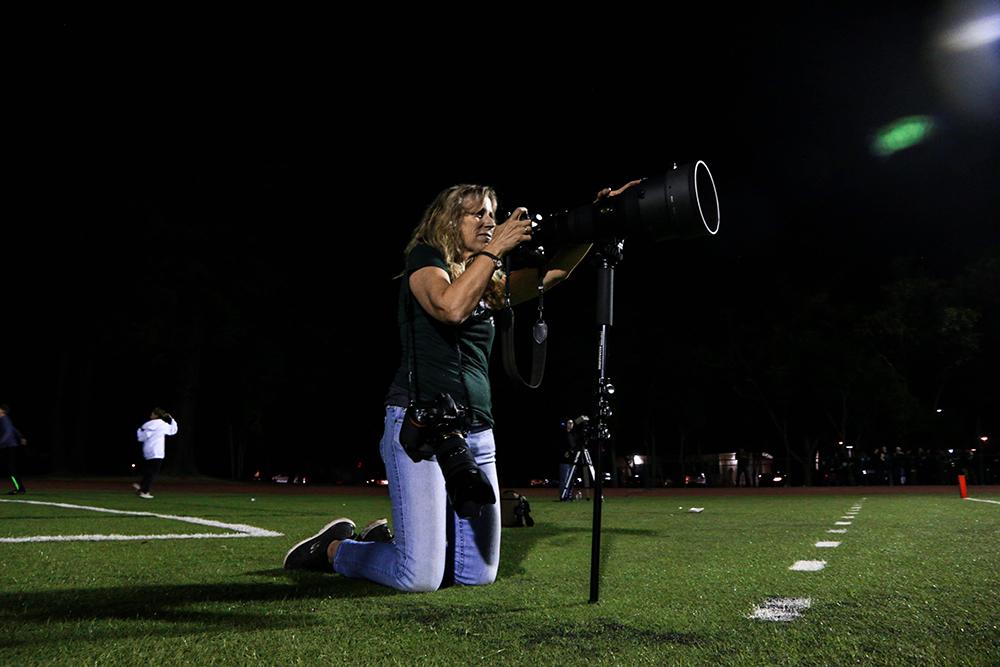 The Hickey Family Team: Zooming in on a family of sports photographers

Leaning against a gym wall, two generations of the Hickey family sit side by side, cameras at the ready. As Palo Alto High School basketball players rush to the net, sophomore Jenna Hickey, her brother senior David Hickey, and their mother, Karen Hickey grip their camera lenses in unison in preparation for the perfect shot. The ball swooshes through the net and the clicking sounds of all three cameras simultaneously fill the gym.

The Hickey family tradition of photography revolved around sports since the beginning. When Jenna started competitive gymnastics and David became involved with T-ball and soccer, Karen picked up a hobby of her own.

“A friend told me about a sports photography class and I took it,” Karen says. “I loved it and improved pretty quickly, so I got a better lens and kept going.”

Soon enough, she was shooting every one of Jenna and David’s games at Greene Middle School and eventually moved on to Paly games. Although she originally volunteered to photograph the band at the varsity games on Fridays, her focus promptly shifted from the stands to the field.

“[During varsity games] David would text me from the stands saying ‘Hey, stop photographing [the band] … start doing football,’” Karen says. “Now, David plays varsity football and Jenna does cheer, so I’m always out there.”

Just four weeks into David’s freshman football season, he broke his arm and was confined to the bench. Instead of just watching the games, he picked up a camera and joined his mom, staying close to the action.

“I didn’t want to be on the sideline with the junior varsity team,” David says. “My mom had a major impact on me starting to take photos. She introduced me to photography and taught me everything I know.”

Together, Karen and David have photographed nearly all of the Paly sports teams, and Jenna is quickly catching up. The youngest of the family, she started shooting football games two years ago as a freshman. All three agree that football takes the most skill but yields the greatest rewards.

“I want to show [athletes] at their best — or even capture the fun, little moments that most people might miss. A pat on the back, a smile or a hand to help someone up — that’s all about the spirit of the game.”

“I love photographing football because my brother plays it and it’s such a fun sport,” Jenna says. “Growing up it was on the TV every Sunday, Monday, Thursday, Friday — just so much that I’ve kind of grown up around it.”

To get the perfect action shot during football games, the Hickeys say they must constantly think smarter and act faster than the defense to predict where the ball will go next. After years of practice, they know most players by their names and numbers and can successfully navigate the field and target certain players for action shots.

“I love that I can capture a split second in time in which the athlete is at their peak performance and just say ‘Wow,’” Karen says. “It all happens so fast that you don’t realize the effort needed to catch the ball, make the goal or swing the bat.”

In a game as intense as football, Karen says she aims to take photos that not only highlight the action but also the camaraderie between players by paying attention to what goes on both on and off the football field.

“I want to show [athletes] at their best — or even capture the fun, little moments that most people might miss,” Karen says. “A pat on the back, a smile or a hand to help someone up — that’s all about the spirit of the game.”

Like a coach, Karen helped her children become the skilled photographers they are today. She taught them everything from altering lighting and framing the ideal shot to post-production editing.

“Sometimes I’ll just sit down with my parents and talk about a photo I want and they’ll walk me through what I should try,” David says. “My mom was also her [Jenna’s] main teacher, but every now and then I’ll give her a tip or something to keep in mind when taking photos.”

Recognized by players on the field and students in the stands alike, the Hickey family unit has quickly become a fixture at Paly sporting events. Photography is their way of giving back to the Palo Alto community; but most of all, it’s what helps them grow closer as a family.

“Most families go hiking or something to spend time with each other,” Jenna says. “We take photos.”