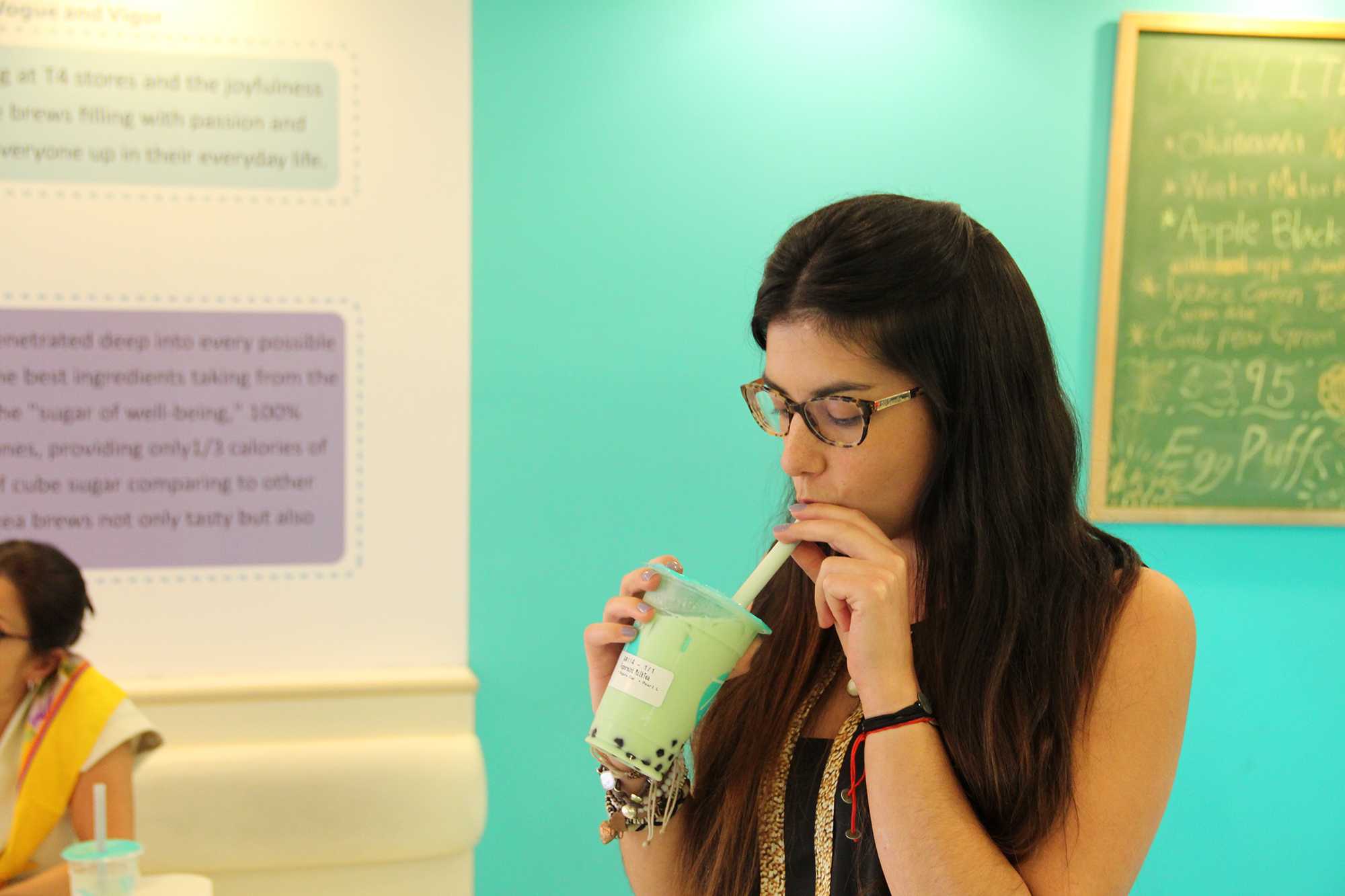 The good, the bad and the Milk Tea

It seems like Pearl Milk Tea has been sweeping the nation – or the Bay Area, at least. The public’s sudden penchant for PMT has been especially evident in Palo Alto. In the past year alone, Palo Alto residents have seen three milk tea shops spring up around town. Out of these three shops, where will one find the best pearls? The sweetest drinks? The best service? Verde reviewed all three of Palo Alto’s milk tea shops in hopes of answering these very questions.

T4 has had no trouble garnering fans and loyal patrons at light speed since it first opened its doors in November 2014.

It is by far the most frequented (and most Snapchatted) milk tea shop in Palo Alto, and this is always evident, even during non-peak hours. If you want to try your luck and go there on a weekend evening, you’ll be lucky if the store’s line doesn’t stretch out onto the sidewalk.

Even as a self-proclaimed milk tea connoisseur, it was difficult for me to distinguish T4’s classic milk tea from that of Pop Tea and Gong Cha. Because T4 is the most expensive of Palo Alto’s three milk tea shops, I’d only recommend patronizing it for its more unique drinks, such as smoothies.

Unfortunately, T4’s pearls definitely fall short compared to those of Gong Cha and Pop Tea. They feel more manufactured and chewy. Sadly, the quality of these pearls doesn’t really measure up to the melt-in-your-mouth consistency offered by other milk tea shops in the area.

I also decided to try the Lemon Smoothie with Aloe. Right off the bat, I recognized that this drink tastes a lot like lemonade. It’s the perfect drink for the hottest of Palo Alto days.

Don’t be scared to try Aloe. “Ick, they put that stuff from sunburn relief cream in their drinks?” was my initial reaction, too. I found that the topping has a smooth, refreshing texture that complements the drink’s lemon flavor.

Pop Tea Bar is the newest of Palo Alto’s three milk tea shops, as it opened last spring. It’s already proving itself a competitive addition to the up-and-coming collection of shops on newly renovated South California Avenue and its neighboring streets.

One unique aspect of Pop Tea Bar is that its employees bring your order straight to your table. Because of this, I gave them an A+ for service on my super-arbitrary grading scale.

The classic milk tea I ordered was tasty and refreshing, without straying too far from what I’d expect at any other milk tea shop in the area.

Pop Tea Bar’s Happy Family Milk Tea, on the other hand, is a good choice for the more adventurous souls in town. The drink’s contents include pearls, lychee jelly, herb jelly, pudding and red bean. What turned me off about this drink was the sweet red bean. I found that its rough texture just didn’t fit well with the drink’s other ingredients. Also, who wants to drink beans? Not me.

Additionally, I wasn’t a huge fan of the pudding. It had an odd, slimy consistency — a little “off-pudding,” if you will.

Pop Tea Bar drinks only come in a large size. This makes it the best local shop if your milk tea budget isn’t huge, as most drinks on the menu cost between $3 and $4. Also, a word of advice: Pop Tea drinks are very filling. Share one with a friend.

Gong Cha’s location is ideal in that it’s not too busy, yet it’s still situated close to University Avenue and the rest of downtown Palo Alto.

Gong Cha’s employees always greet guests with a smile and a friendly attitude. It appears as though they all get along well, laughing and joking with one another as they make drinks. This laid-back, friendly demeanor among Gong Cha’s employees makes its atmosphere more pleasant than that of your average milk tea shop.

When I looked at Gong Cha’s menu, I scoured it for the most exotic-sounding drink. To me, this was the Ice Cream Black Tea.

While the tea tasted fine and pretty similar to that from T4 and Pop Tea, the addition of a gratuitous scoop of cold, sweet vanilla ice cream made this drink a home run.

In my opinion, the Ice Cream Black Tea puts Gong Cha on the cutting edge of the modern milk tea game, and I’ll definitely be coming back soon despite nearly dying of embarrassment after trying to push on a “pull” door on my way out. It happens.