The Glass Half Empty

It’s sometime after 11 P.M I haven’t managed to complete a single homework assignment, and I’ve spent much more time than I’d like to admit scrolling through a slew of Buzzfeed quizzes. (In case you wanted to know, I’m destined to become a tattoo artist in Amsterdam.) I’m about to close the Facebook tab when a message from my friend pops up on my screen: “Tell me if you agree with this: I’m optimistic about people’s personal lives/futures, but pessimistic/realistic about the world’s future.”

I reach for my keyboard to answer her, but as I do, a sense of uncertainty stills my hand.

What makes someone an optimist? A pessimist? How does being an optimist or a pessimist impact someone’s perspective on life? Not only that, but is one outlook better than another? 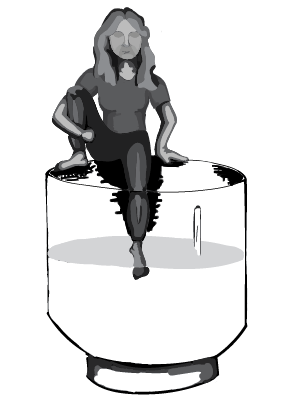 I asked a few friends what they thought I was most like, and their answers were similar: I seem more like a optimist. This surprised me, because while I feel like I have some generally optimistic beliefs — such as individuals being naturally good with the occasional fault, usually with reason — I don’t think of myself as optimistic.

“An optimist is a person who believes that good things will happen in the future, and focuses on the good things that will happen, rather than focusing on the negative things,” says Positive Psychology teacher Chris Farina. “A pessimist would just be the opposite.”

Naturally, one’s outlook on life is heavily influenced by their experiences with the world around them. Genetics do play a role, but it is really our experiences and how we deal with those experiences that shape our perspectives.

No matter how we choose to use our experiences, there is still debate over whether it is better to have a pessimistic or optimistic outlook on life.

While people usually label themselves as one or the other, I believe they are really two ends of a spectrum. We perceive our experiences to be more optimistic or pessimistic, with qualities of both.

According to Farina, both pessimism and optimism have benefits. Pessimists, for example, are more accurate in what will happen in the future. But while pessimists might generally be more realistic about what will happen, there are downsides.

“[In the] long term it [pessimism] does take a psychological toll,” Farina says. “People that are optimists … [are] better able to bounce back from setbacks because they believe that things will get better, so they’re more inclined to actually try and keep pushing forward … It tends to make them overall happier than pessimists.”

It is generally thought to be socially better if you are cheerful, witty and excited to be around people — or “overall happier,” as Farina says, something associated with optimism.

In a 2010 study conducted by The Washington Post, adults were asked if they prefered optimistic or pessimistic politicians. Optimism was ranked as a more preferable trait, along with reliability and intelligence.

“Americans see optimism as a positive part of their politicians’ personalities, just as suggested by the evidence above,” writes Neil Malhotra and Yotam Margalit.

While there are definite pluses to being an optimist, there is also an issue of assimilating to become the “ideal” person to reap the perceived benefits. We use our disappointments to push us to perform better in the future — without our pessimists, who would have created great art and pushed the boundaries of what we think?

We use our disappointments to push us to perform better in the future.

“Pessimism can give us the push that we need to try our best,” writes Annie Murphy Paul in a Psychology Today article.  “This phenomenon, known as ‘defensive pessimism,’ involves imagining all the things that might go wrong in the future. It spurs us to take action to head off the potential catastrophes we conjure and prevent them from happening.”

But this does not mean we should all become more pessimistic. Without optimists, there would be no new inventions and no hope for a better future; we might wallow in self-doubt and failure.

I thought that trying to decipher what I “was” would help me to succeed — that recognizing my mindset and knowing my strengths and weaknesses would help me discern what I should work on. But the more I think about it, the more I realize I shouldn’t think about it: After all, whether we’re optimists, pessimists or something in between, part of the human journey is the constant changing of who we are.   v