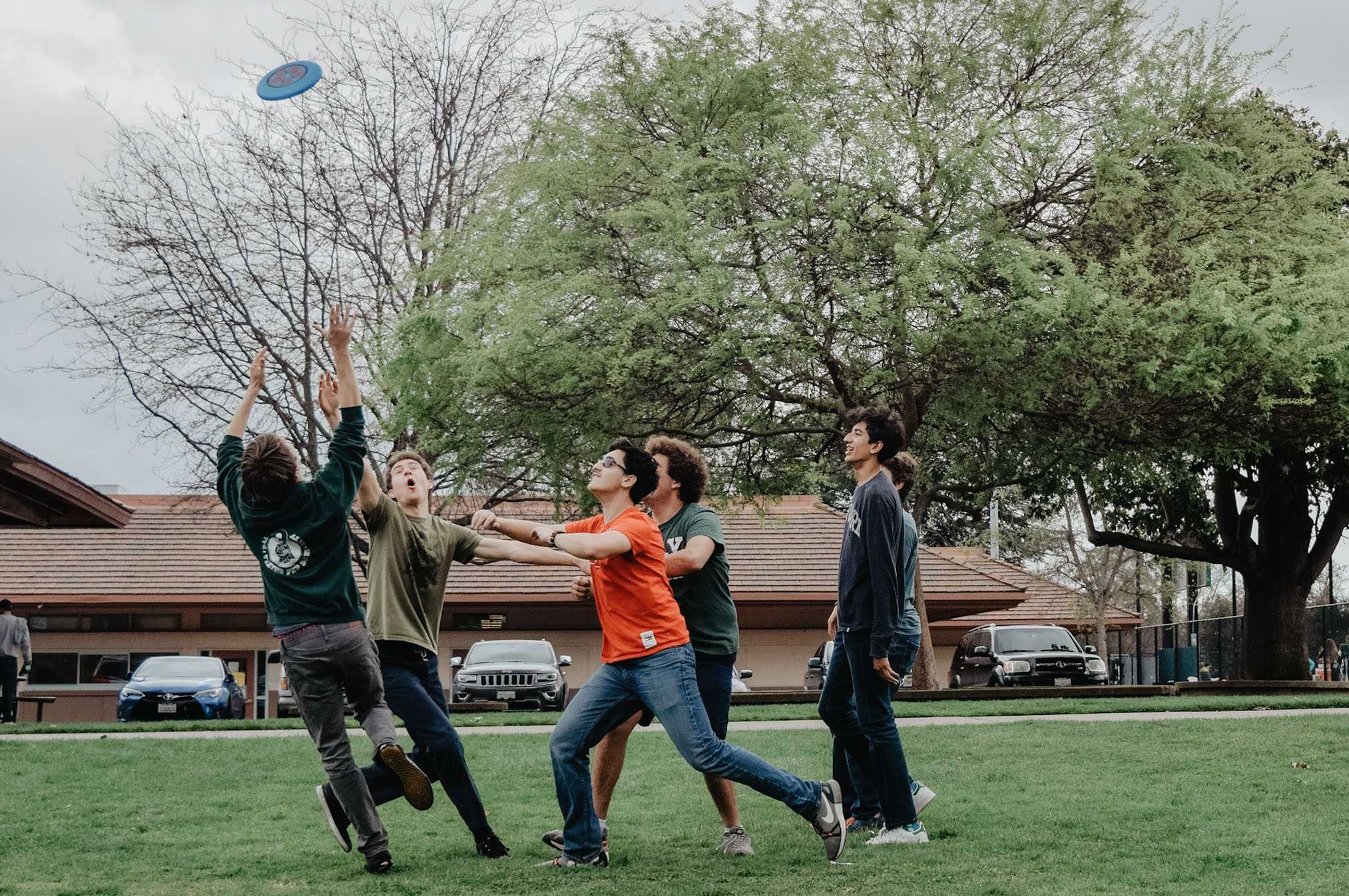 As a plastic blue disk floats across the Quad at Palo Alto High School, a ragtag group of junior and senior students race each other to reach it first. Through a crowd of jostling bodies, one arm emerges, frisbee gripped tightly in hand. It’s Tuesday at Flex, and the game has just begun. While most students may spend their Flex clarifying math questions and lounging on the grass, for juniors Lucas Washburn Miles Schulman, Harrison Frahn, Javid Alasti, Philippe Rerolle, Ashutosh Bhown and Nishant Patwardhan, Flex is ultimate frisbee time.

The group first began playing frisbee last summer, during breaks when long Living Skills sessions left them looking for a way to pass the time. “We were really bored,” Alasti says. “We were just tossing it [the frisbee] around, and a game naturally happened.” Although summer eventually came to a close, the games persisted. With the implementation of mandatory Flex during the school year, the frisbee enthusiasts found a designated time set aside for their games. After several games during Spirit Week, passersby began to notice the boys, and some even started to join them. Now, what started out as casual games with several friends has become a lifestyle for a group of nearly 20 students. Frisbee doesn’t require rackets, nets or gloves, and that’s precisely the charm for many. With just a disk and a few people, the players are ready to start a game whenever the occasion arises. “It’s not organized,” Patwardhan says. “You can kind of do it anywhere. You don’t need a lot of space, and you don’t have to be good at it.” With a handful of rules and an abundance of energy, anyone is welcome to join their games on the quad. “Random people show up, and the more, the better,” Schulman says. Frahn says, “You don’t have to care about it [frisbee]; you just have to want to have fun.”

Senior Rafi Moskowitz is one of the students who joins in on their games. Along with several other Gunn and Paly students, Moskowitz plays on the citywide co-ed high school ultimate frisbee club team Gunn Control. They compete against other high school frisbee clubs, and have even been invited to college tournaments due to their high rankings. However, frisbee hasn’t always been a part of Moskowitz’s life. A former rower, he was unable to continue the sport after sustaining spinal nerve damage and injuries to the shoulder. However, he was determined to remain active throughout high school. After several recommendations from his friends, Moskowitz tried out for Gunn Control. “I had never played, or thought of playing ultimate up until this year,” Moskowitz says. “I kind of laughed at it at first but, as soon as I started playing, I realized that I had been missing out for the past few years.” “It’s a great way to just have some fun, get good exercise, bond with your team, and just have a really great experience,” Moskowitz says. “You not only are respectful and nice and kind to the other team, but throughout each game, you congratulate each other when they score a point [and] you talk to each other about how well they played after the game.” For senior Keenan Laurence, who also plays on Gunn Control, frisbee fosters a special type of bonding that traditional sports lack. “The people are so supportive, friendly and welcoming,” Laurence says.

“Whether they are on your team or you’re playing against them, high fives are universal, and smiles are everywhere.”

Spin the stress away

For the group of friends, frisbee also acts as an outlet for academic stress. The games allows for physical exertion without the intensity or commitment required for a school sport. As the majority of the players are juniors, heavy academic workloads have caused no shortage of stress. They have come to appreciate the escapism and relief that frisbee offers, and know that others may find it valuable as well. “It’s [frisbee] kind of like a distraction,” Patwardhan says. “It takes your mind off things.” To any students looking to have some fun during flex, the frisbee boys say “come out and play.”