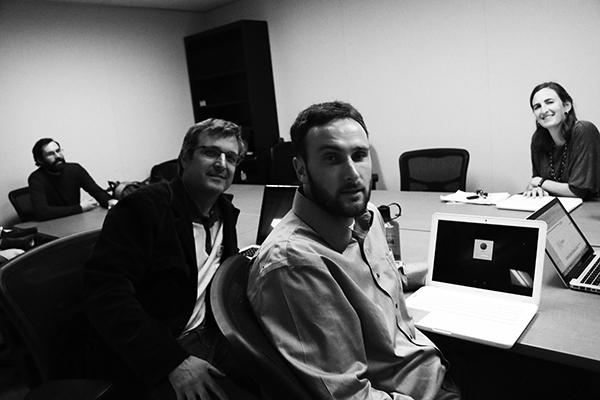 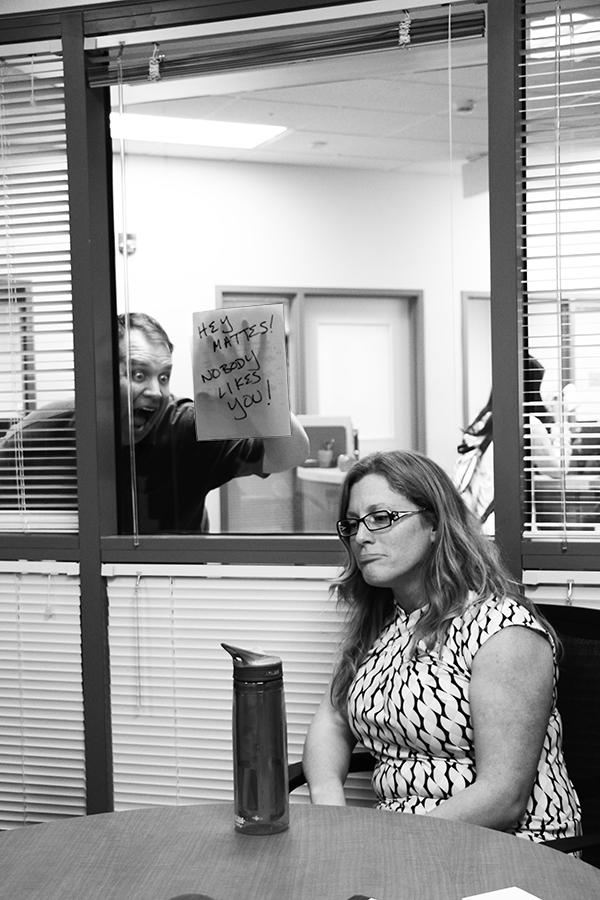 Steve Foug holds up a note that says “Hey Mattes! Nobody likes you!” against the window of the conference room. Mattes pretends to act offended.

“Hey Mattes, nobody likes you.” Sporting a typical look of mischievousness, Palo Alto High School social studies teacher Steven Foug presses a piece of paper with these words written on it against the glass of the 800s building conference room. On the other side of the window, the subject of his insult, psychology teacher Melinda Mattes, eyes him while comfortably seated on a cushioned chair.

Foug’s serious face is quickly transformed into a smile as they both break into giggles. With the laughter echoing throughout the building, fellow social studies teacher Benjamin Bolanos comes to figure out what the raucousness is about. He quickly joins in the banter, retrieving a Wonder Woman coloring book picture, with Wonder Woman labeled as “MATTES” and the car she’s holding up as “FOUG.”

“I’d like to say this is a performance,” Mattes says. “But this is day-to-day interaction.”

As a whole, the downstairs portion of Paly’s 800s building — the social studies department — is rare, due to its wide range of characters such as Bolanos, Mattes and Foug. Identified by their quirky personalities, sense of humor and overwhelming camaraderie, the members of this department foster an environment entirely different from what most would expect for a group of high school teachers.

“We are talking about serious stuff that is important to our jobs,” Davis says. “But it is a very family-like atmosphere where there is joking, so on and so forth.”

This department is also unique because of the friendships that extend outside of school. For example, Bolanos and Davis surf together, world history teacher Steve Sabbag and history and economics teacher Grant Blackburn play golf on the weekend and there have been group excursions to Giants and Warriors games.

Contemporary world history and foreign policy teacher Adam Yonkers, in particular, has grown to value the friendships that have formed. 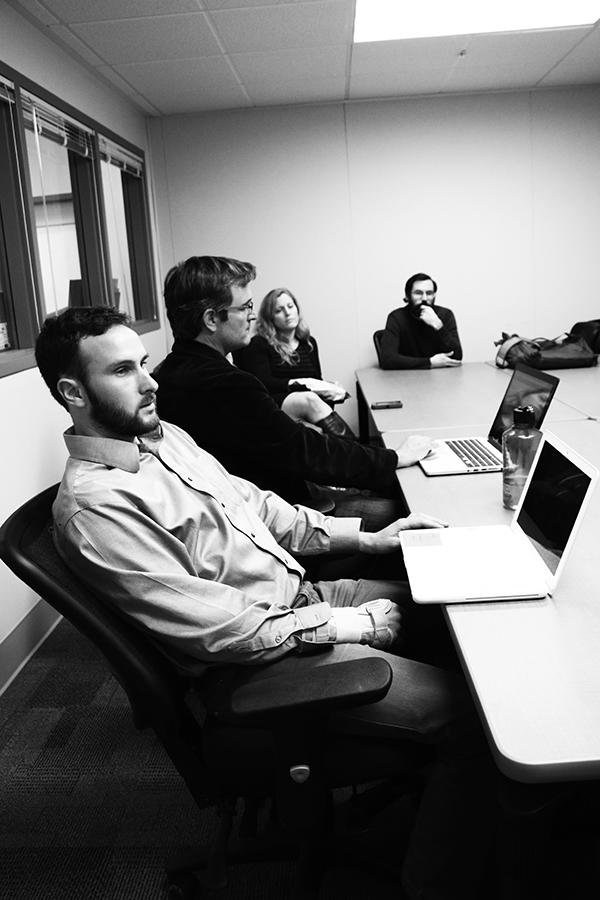 Davis, Yonkers, Mattes and Farina sit around the conference table in the 800s building.

Though there are only six women in a department of 21 teachers, they do not feel the effects of a male dominated department because it is a family; the personal relationships of the individuals within the department negate the large male presence. Part of the makeup of the department is controlled by Jaclyn Edwards, the current instructional supervisor, who hires teachers into the department.

“I fondly call this department, and they know this, my frat house,” Edwards says. “They make me laugh. I feel so blessed — and I use that word carefully — I feel blessed to be a part of this department.” 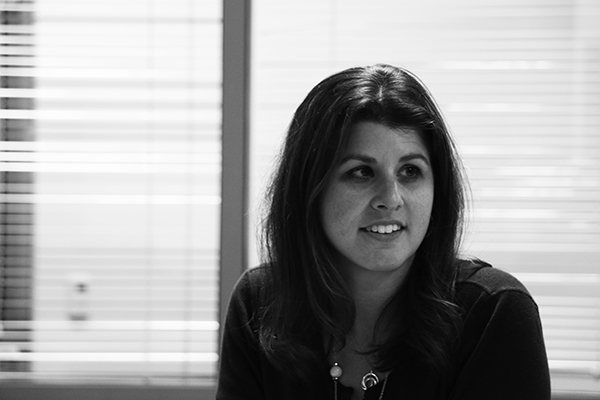 Jaclyn Edwards hangs out in the department.

All of the department’s relationships are founded on a basis of mutual respect. Tenth and 11th grade history teacher Justin Cronin says that having a foundation of friendship for coworkers facilitates discussions.

“Some of the things we talk about in terms of student stress and homework, horizontal and vertical alignment … those tougher conversations are made easier when people know each other well and we can have a difference of opinion without feeling like we’re being judged,” Cronin says.

“We each have our independent thing going on but we definitely … always know we can rely on each other,” Whitson says. “If you’re out sick, the email goes out, ‘I have to miss this period, who can cover me,’ and you know you’ll get covered by somebody else, so then you’re willing to go do something. So I guess it’s that mutual respect and reliance on each other and kind of a comfort level, too. I mean really anyone in our department you can go out and have fun with.”

For Yonkers, who came from from a background in marketing, the collaboration and unity found at Paly differs from the corporate hierarchy of his previous job.

“What’s really nice about teaching is that it’s like everybody is communist,” Yonkers says. “You’re all in it together and there’s not the hierarchy necessarily of creating distinctions, so you’re all basically pulling equal weight. … Life is about being happy and fulfilled. You don’t want to dread going to work.”

Respect encourages openness and community. Davis experienced the community and support when he first joined the department.

“When I first came here I had no curriculum,” Davis says. “I had nothing and they just opened their files to me and gave me all of their stuff. They were willing to help out when I didn’t understand certain things or how to teach certain concepts so that’s huge.” 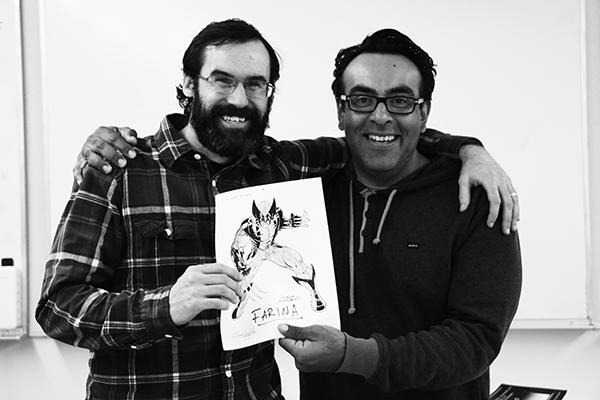 Farina and Bolanos showcase a coloring book picture of Wolverine that Bolanos labeled as Farina.

The social studies department is known for its individualism; each teacher has their own personality which they utilize when teaching and interacting with students. Because all of the teachers connect on a more personal level, they are able to acknowledge the positive traits of their colleagues as well as feel comfortable joking around with or pranking them.

“It [individualism] is a core value of the social studies department,” special education history teacher Heather Johanson says. “You are kind of an individual. You are super authentic. You are who you are. You have an interesting take. Similarity is not valued. Not that we don’t value people collaborating with one another. We also value kind of what each individual person brings to the table.”

Many teachers within the department are known for their humor. Some use it to better communicate their subject matter, but when they are hanging out, their senses of humor shine during their discussions.

“Even just eating lunch we are always trying to see who is funnier, who is more sarcastic, who is the better story teller,” Bolanos says. “We don’t take ourselves that seriously. We take ourselves seriously in regards to our profession, but we are also having a good time — which is what is memorable about it.”

This department has long been light hearted. Foug recalls playing “Trench Warfare,” a game that involved flipping over desks, using the furniture as protection while “throwing stuff” at each other. It was 4 p.m., there were fake machine gun noises and no students around as Bolanos, Foug and Yonkers settled in for the afternoon in their trenches.

“[Machine gun noises] ‘You are dead Bolanos — I got you,’” Foug says. “It was just me Bolanos and Yonkers fake shooting at each other and Edwards just shaking her head at us. We would throw little grenades. ‘I got you with a grenade, man. You are dead. I win. I win the war.’”

Mattes recalls a prank that Foug, Bloom, Yonkers and Bolanos pulled on her and Edwards in 2007. The guys had attended a Giants game together and that evening they had texted Edwards and Mattes, saying, “We lost Yonkers.” Confused, they did not think much of it, until the following morning when Yonkers was not at school and they began to worry. The guys played along, saying they did not know what happened to him.

“Ms. Edwards and I were kind of like, ‘Haha’ but then we were kind of freaking out,” Mattes says. “‘Oh my gosh, how did you lose him? What went on?’ They totally got us. They even had us ready to cover his class. We were kind of freaked out about: How do we find him? What is going on? And of course he was totally fine. I am sure he was in on the joke. I feel like it was convenient he didn’t show up until late.”

The social studies department’s unique personalities fuse together to create the environment that makes the department so special.

“That is what makes this department so great,” Edwards says. “It isn’t anything in particular or special. And I want to acknowledge my colleagues and the other departments. They too have great people who care about all of you very much. For this department I like to think that there is something special. We really like each other. A lot. And we love what we do. A lot. And we love our students. And I think maybe that is what is coming across.”