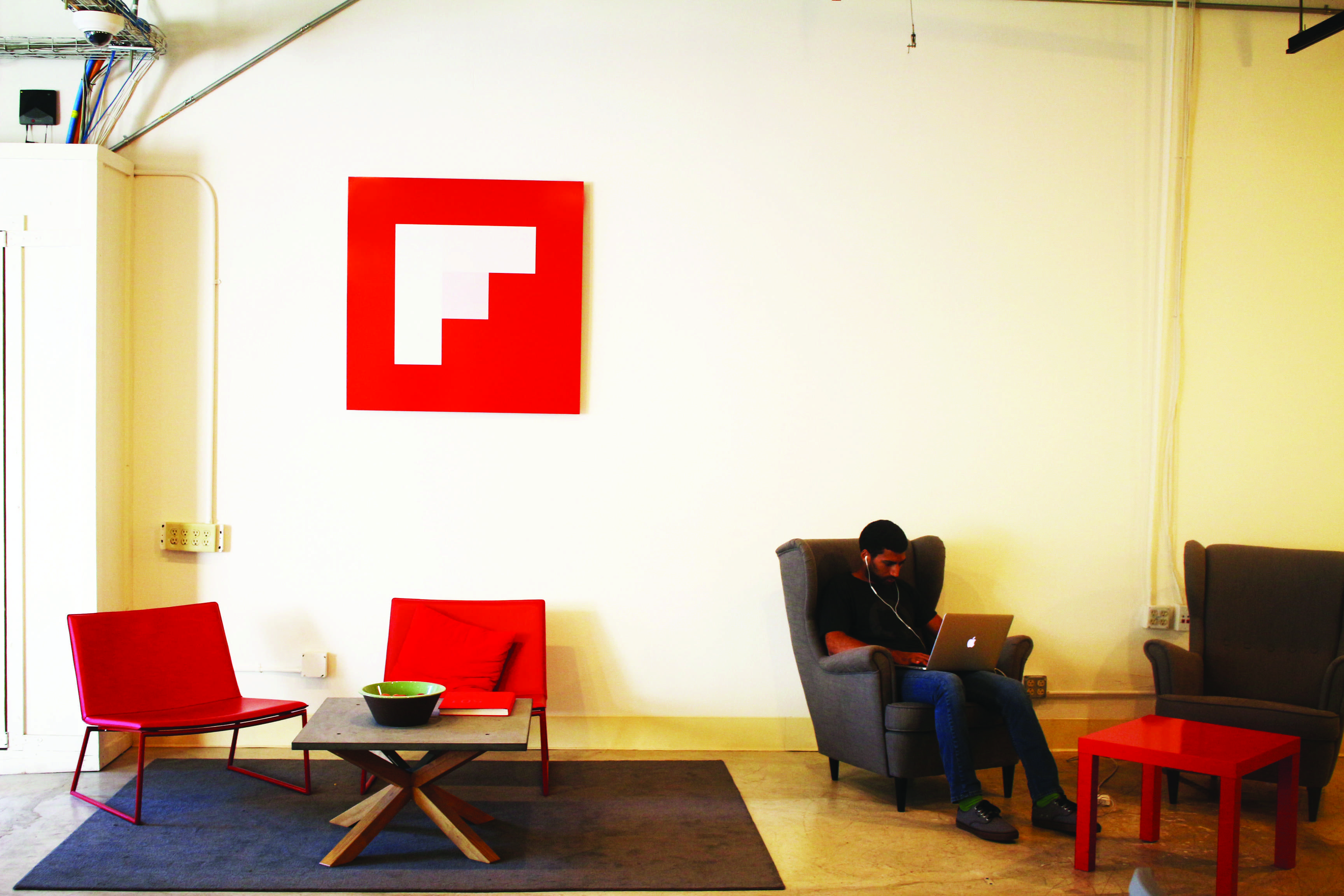 The Flipboard 9-to-5: How one Palo Alto Startup is Flipping the Conventional Workplace Upside-Down

Behind the opaque glass doors of Flipboard’s headquarters lies a bustling and energetic open workspace. A casual, light-hearted atmosphere is apparent to anyone who stumbles into the hub of this social media platform company cemented in the heart of Downtown Palo Alto.

“As Olivia Pope would say, ‘You gotta trust your gut,’” Flipboard News Editor Gabriela Schwartz says to her co-worker, referencing the television show “Scandal” as the whole room bursts into laughter.

Glanville and Schwartz casually converse within the workplace kitchen beside variegated shelves of potato chips, granola bars and beverages, all of which are free of charge for employees. A pink and silver Razor scooter leans upon a plastic desk chair. A ping pong table in the corner of the room beckons employees to come unwind and de-stress. From its bare concrete slab floors to its exposed ventilation ducts running along its ceiling, Flipboard’s work environment is characterized by friendly informality. 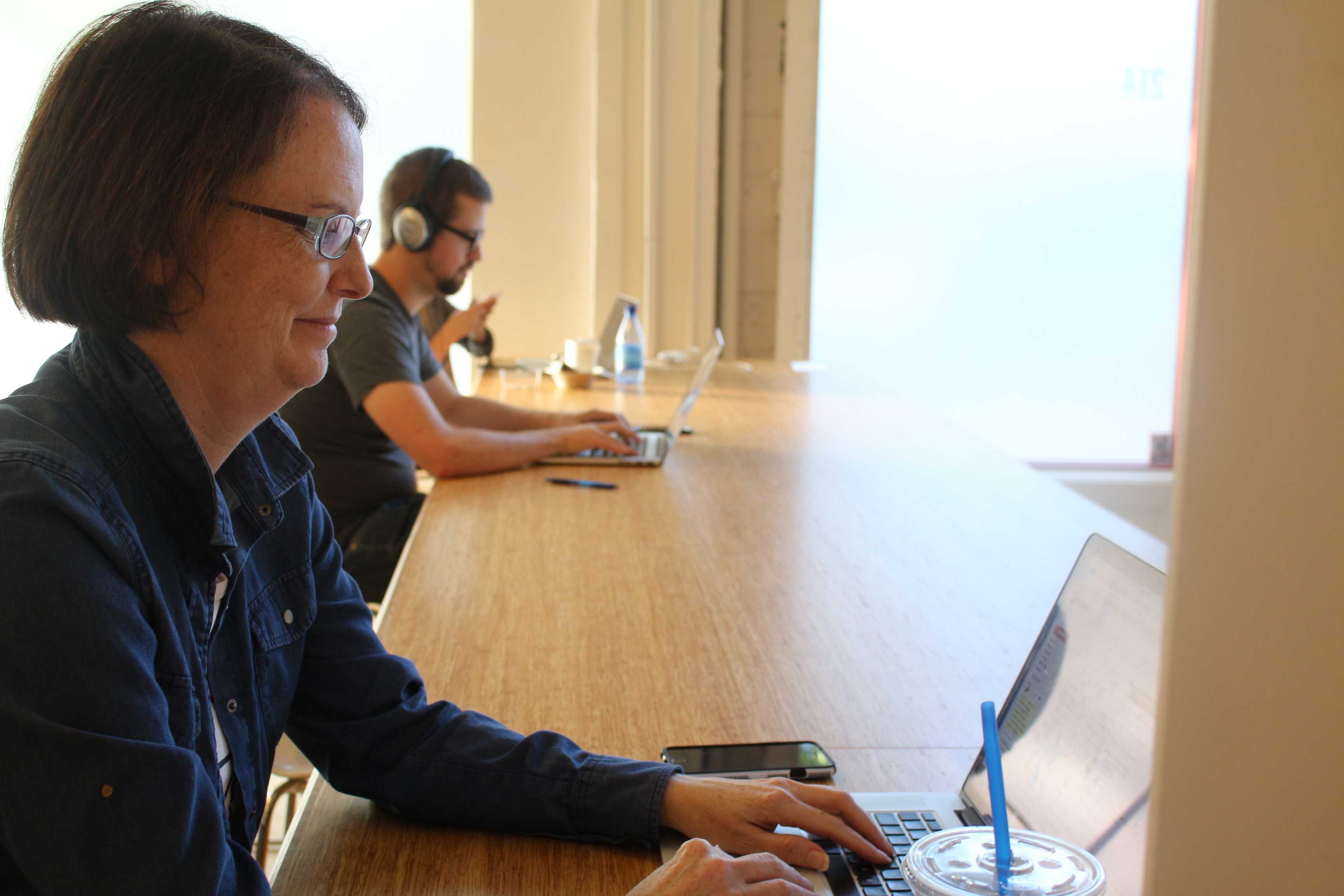 Along with Google and Facebook, Flipboard makes its headquarters emblematic of a Silicon Valley push to make the workplace more enjoyable.

Though Flipboard, a news and media company has expanded internationally in the past five years, its headquarters have maintained the same open, collaborative atmosphere since its founding in 2010.

Flipboard’s Palo Alto headquarters encompass open-air space throughout — a purposeful design intended to facilitate discussion and foster the birth of new ideas. You won’t find cubicles anywhere within the building.

“Our meetings were very relaxed. [There was] food in the corner of the room, people were playing ping pong and music was blasting,” Schilling says. “It was relaxing in that way that ideas were free to flow and be heard by everyone.”

David Creamer, Flipboard’s head of platform engineering, believes the company’s eclectic employeeship makes it most unique. Creamer feels he can learn a lot from area specialists at the company simply by working alongside them.

“There are people who know absolutely everything about databases, or UI [User Interface] design, or public relations, and they’re way more specialized than I am and way smarter in those fields,” Creamer says. “I learn something new every single hour I’m here.”

Since Creamer started working at Flipboard five and a half years ago, the company has come a very long way and is now far from the typical “running-out-of-a-garage” startup stage popularized by the roots of tech giant Apple.

“It’s a culture of people who are constantly trying to

Flipboard’s product itself is an app for mobile, tablet and now desktop platforms that aims to be a “personalized magazine.” It’s centered around a feed that displays features or short blurbs about topics that intrigue the user. There’s a large variety of interests to choose from, with thousands of topics including science, entrepreneurship, mindfulness, cute animals and celebrity news. According to Flipboard’s website, the company aims to help its customers better understand the world by compiling an eclectic magazine tailored to their tastes.

Creamer believes a workplace-wide culture of improvement is responsible for Flipboard’s stunning growth in five years.

“Almost everyone here is always asking himself the same question: ‘How can I do a better job?’” Creamer says. “It’s a culture of people who are constantly trying to improve.”

Christel van der Boom, one of Flipboard’s first employees, views the company the same way. To her, Flipboard is just beginning a long journey.

“Although we are at Flipboard 3.0 [the 3rd version of Flipboard], there is so much we want to do,” van der Boom says. “We are not even close to done; there’s always a step forward.”