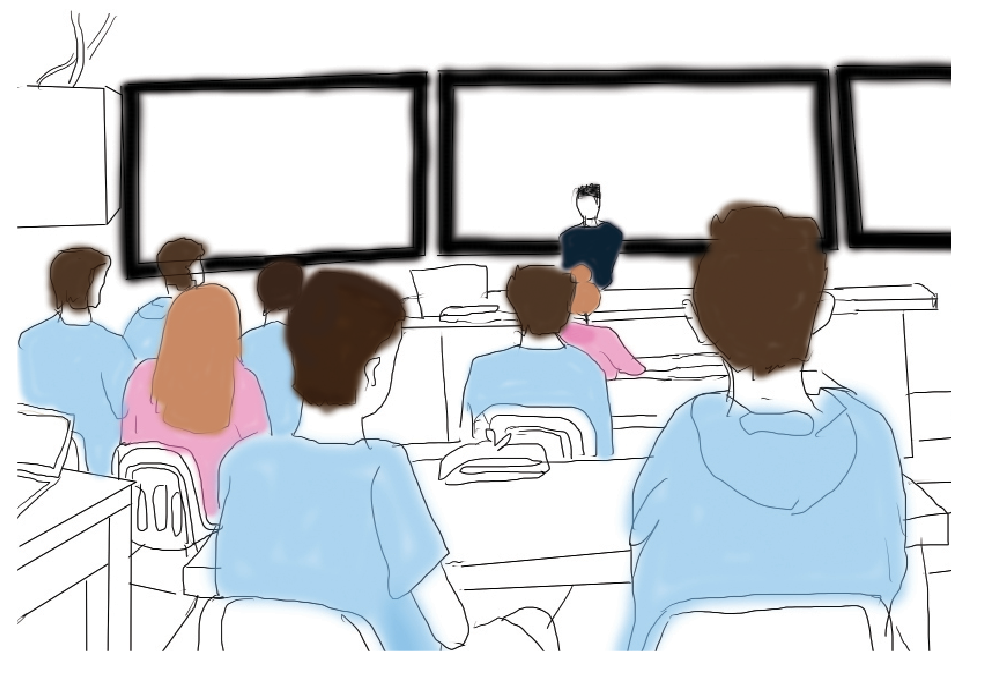 As the rowdy Comedy Literature class breaks up into discussion groups, the loud voices of 22 boys fill the room. Meanwhile, the discussion coming from the only seven girls in the class is barely audible. This classroom atmosphere is flipped in the female-heavy English electives such as Analysis of the Writer’s Craft, where the girls initiate class discussions and speak out with ease.

Even at Palo Alto High School, where we seek diveristy and battle stereotypes, the gender ratios of students in English electives surprisingly reflect traditional gender expectations.

The school administration has been working to combat gender disparity, according to English teacher Alanna Williamson, but with so much focus on representing girls in STEM, the flip side has not gotten enough attention. Why do females make up such a disproportionately small number of students enrolled in certain English electives? Why do they dominate others?

Junior Sofia Olgado enrolled in Sports Literature to fulfill her elective requirement for the year, and she immediately became aware of the unequal ratio of male to female students. She says she was not surprised.

“The class definitely reflected the social expectation that boys tend to like sports more than girls,” Olgado says. “In high school, a lot of students feel pressure to be interested in the same things as their friends and peers, and for that reason they tend to conform to stereotypes.”

“The class definitely reflected the social expectation that boys tend to like sports more than girls. In high school, a lot of students feel pressure to be interested in the same things as their friends and peers, and for that reason they tend to conform to stereotypes.”

Along with societal pressures, students are also subject to peer pressure within friend groups to take the same courses. This pressure often causes single-gender groups to sign up for the same elective, and leads to an even more skewed gender ratio within classes.

“I definitely think there is pressure to take certain classes based on what friends are taking, even if it’s not obvious,” Olgado says. “Regardless of this, it is important that Paly students take classes in the areas they are interested in, rather that just following the trends of their friends.”

Junior Fabiana Teofan defied these pressures by signing up for Comedy Literature as her elective.

Although she says it doesn’t hugely affect her behavior in class, she has a theory for why so many male students sign up for the course.

“Guys seem to make the jokes and want to make the girl laugh and in turn, the girl in the relationship wants to be able to laugh at the guy’s jokes,” Teofan says. “I think that might have some role in why mostly guys are in that class.”

Discrepancies in gender ratios of electives have significant effects on the class dynamic, especially in those for which class participation plays a large role.

“I mean, it [the gender ratio] is a little uncomfortable because you have to get up there and speak and act out,” Teofan says about her Comedy Literature class. “We [girls] mainly stay in one group.”

However, a few students report that they have never noticed the imbalance of gender in their class, partially because of the teacher’s exuberant nature.

“Ms. Filppu projects such a strong positive personality that it helps soften the disparity,” says David Foster, a junior in Comedy Literature.

Though the effects of the imbalance may be subtle initially, the consequences become apparent during class discussions.

“[In Comedy Literature], boys are more likely to share out,” senior Clara Luehrs says. “But in my Writer’s Craft class, there are a lot of girls who like to share out.”

“I want to know what girls think,” Foster says. “It’s just not as fun for me; I prefer a balance, because there’s more to talk about. Even balances help everyone.”

The English Department agrees, Williamson says, and is trying to adjust the system in order to combat gender imbalances displayed in so many electives.

“We try to be more conscious of it [gender disparity] and maintain balances when possible. Diversity in classes is good because it can offer a diversity in opinion and perspective.”

“We try to be more conscious of it [gender disparity] and maintain balances when possible,” Williamson says. “Diversity in classes is good because it can offer a diversity in opinion and perspective.”

In response to demand for more humanities-oriented Advanced Placement classes, but also as an attempt to restore gender balance in courses, the English Department is introducing AP English Language  and Composition — available to upperclassmen this fall.

“Part of the reason we’re adding AP Language this year is … because we are trying to offer another AP option to diversify and attract all types of students,” Williamson says. “Our department immediately begins having conversations about why [disparity is] happening and how we can find a balance of gender in [classes] again.”