The effects of compulsory service on patriotism 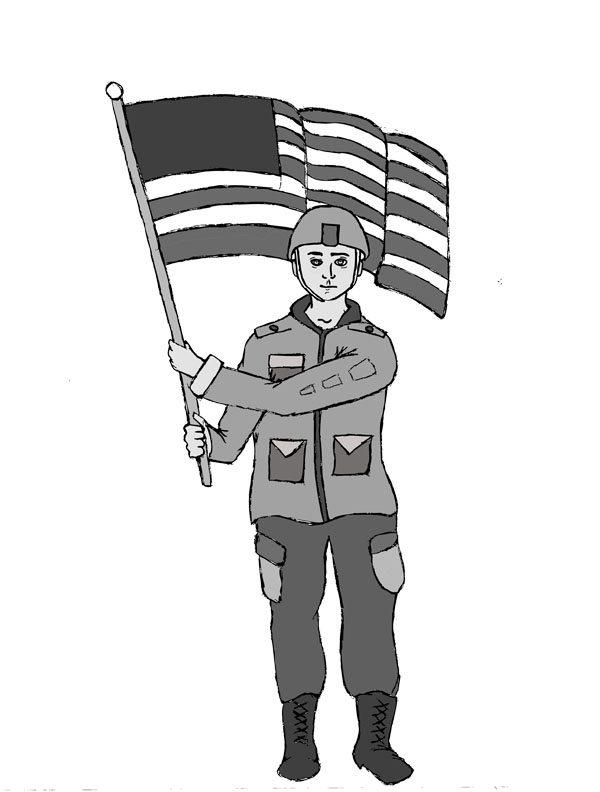 While many American teens start college or careers at 18, in 34 nations around the world, teenagers must take a few years from their lives to fight for their country, like Har Noy.

For many nations, requiring military service is an effective means to muster patriotic sentiments and bring citizens closer together. In the United States, determining if compulsory service would increase patriotism is difficult because of the size and prominence of freedom of choice in our country.

In Israel, this service is known as the Tzavah, and every citizen must serve once they turn 18. Men must serve for three years and women for two.

Shiri Arnon, a Palo Alto High School junior who lived in Israel for several years, says that there are benefits to serving in Israel’s military.

“The Tzavah is a… great experience [in which one] can make lifelong friends,” Arnon says. “The unforgettable experience [of] defending your country can definitely increase patriotic feelings.”

Har Noy agrees that there are cultural benefits to having a compulsory military service.

“The army enables people from different backgrounds, social environments, and places to meet each other and learn more about other people in the country,” Har Noy says. “This basically [unifies] people who would have never met in other circumstances… around one goal: fight for their country.”

Har Noy acknowledges that there are downsides of Israel’s compulsory military as well.

“Some people — such as super religious people — are refusing to take their share in the task of protecting the country,” Har Noy says. “This creates big antagonism inside Israel which has become a major political issue.”

Like Israel, Finland requires military enlistment, despite the country’s long-standing status of peace. Men are required to serve from six to 12 months, but non-combat training is also available.

Antti Kokkinen, a 47-year-old Finnish citizen who served in Finland’s compulsory military and often travels to the United States for work, emphasizes how compulsory service can increase patriotism.

“I went into my military service patriotic, but came back even more patriotic,” Kokkinen says.

“[The military] gives an unique opportunity to bond with men from all over the country,” Salolainen says.  “In my mind, this experience of ‘togetherness’ is an important building block for a healthy national self-esteem and positive patriotism.”

Austria, another country with mandatory military service, requires all men to serve for six months or work for nine months in the “Zivildienst,” Austria’s non-combat service alternative.  Service options include working as a paramedic or nurse for the elders.

Contrary to the beliefs of Kokkinen and Salolainen, Joseph Lang, an Austrian citizen who attended Palo Alto High School last year, believes that Austria’s required military service doesn’t affect patriotism in Austria due to the lack of correlation between patriotism and war.

“I don’t think that military service affects patriotism here,” Lang says.  “Austria is a neutral country, so all you do in the military is help when there’s an avalanche or flood. People don’t actually have to fight in wars.”

Salolainen mentions his take on the differences between how Americans and Finns show their patriotism towards their country.

“American patriotism is expressed in a more extroverted and confident way,” Salolainen says.  “In Finland, patriotism is a more private and serious matter.” Finland’s independence day, for example is far different from its American counterpart.

“It is a rather somber affair that is marked by quiet reflection rather than fireworks,” Salolainen says.

Kokkinen agrees that Finnish and American patriotism are vastly different. He believes that due to the long-lasting peace in Finland, supporting the troops is not an issue of patriotism as it is in America, where we often define one’s patriotism based on one’s partisan support of our nation’s current wars.

“Patriotism and the military are completely not connected,” Lang says.

Steve Foug, a Paly U.S. government and history teacher, believes that in America, patriotism means something different for every person.

“Patriotism is a funny thing,” Foug says. “The definition of [patriotism] from one American is going to be very different from another. [It can be] defending the basic rights, the ideas, because we’re a country based on ideas.”

For some, expression of patriotism might mean “waving a flag,” Foug says.  For others,  “[It] might be standing up to authority.”

Grant Blackburn, another Paly history teacher, believes that compulsory military in the United States has the potential to increase patriotism of citizens.

“On the one hand, compulsory service can be seen as a good thing since everyone can be indoctrinated with the state ideology,” Blackburn says.  “This is great for keeping order in the state and furthering their interests… since a collective conscience is created.”

On the contrary, Foug believes American ideals are too strong for citizens to benefit from compulsory service.

“[Standing up to authority is] such a strong element in our culture that mandatory military service in America would not go over well,” Foug says. “[In a] smaller country with a unique sense of nationalism to it, [compulsory military service] would work better.”

“I strongly believe [service increases patriotism], but it has to be only in specific situations where there is no other choice,” Har Noy says.

Amit Shmuelevitz, a Palo Alto High School student who moved here from Israel last year, believes compulsory service is only an effective means of increasing patriotism in a nation where an on call military is a necessity.

“Israel has to require military service because we are always under a threat,” Shmuelevitz says.  “I don’t think the US [would] benefit from it because… they just don’t need it.”

In smaller nations with less emphasis on individual rights, such as Finland and Israel, mandatory service appears to have a positive effect on citizens’ patriotism, as seen by Har Noy’s time in the Tzavah.

In the United States, a large nation famous for its liberty, the possible effects of requiring military enlistment during peacetime are unclear.