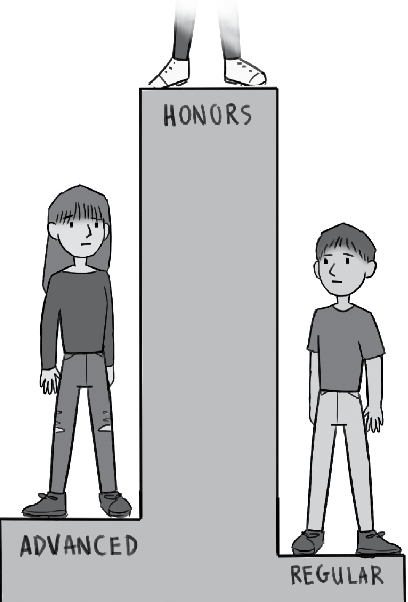 Palo Alto High School junior Nandini Relan is trying a new way to cope with her boredom during the 90 minutes that seem to drag on for an eternity. Today, she’s twirling her uncapped pen with one hand while her other hand supports her drooping head and glassy eyes, her focus slowly giving out to anything but the lecture. Everything about her new class seems to be too easy for her.

Before she decided to drop a lane to this new reality, Relan could handle her honors class. The homework was highly difficult and time consuming, the labs required great care and quality work from partners, and the tests could seem unfair in the ways that they were challenging. But Relan was able to persevere, for the most part, so that she could deliver on the course load she had signed up for.

Then came tech week for Paly theater. “For about a week, you are at school until around 10 p.m. rehearsing for an upcoming show again and again and again,” Relan says. “During tech week, managing school work is obviously a lot tougher […] for the ‘Importance of Being Earnest,’ there was [an honors] test during the same week, and that [test] did not go well.”

As extracurricular and academic stress built up, Relan chose to drop from honors to the regular class, a common solution for many students. What Relan sought through laning down was a slight relief from some of the workload of her academic life. What she got was a class so reduced in its rigor that it was unrecognizable.

Unfortunately, many students say this is a regrettably familiar story.

Supposedly, students in lower lanes should have the opportunity to work at a slower pace, and upper lanes provide kids with a chance to explore their interests and abilities to dive deeper into a subject. Therefore, the main difference between the regular and honors courses should be the depth that the subject is explored. In theory, the lower lanes offer not just different homework loads and learning speeds, but a variety of advantages for their academic success. In particular, the Trigonometry Advanced students are allowed to retake all their tests for a higher score, along with some teachers grading with a rubric rather than the traditional point-system, allowing full scores even on work with mistakes.

“It’s like jumping over a pond and then jumping over a lake,” says sophomore Kate Lee, who moved up lanes from freshman to sophomore year to return back to the lower lane. “There’s no middle.”

“There is too much of a jump between a [math] normal course and an honors course,” junior Ryan Feitzinger says. “When I was in LA for school, there was a midlane course that did a better job of providing options to people with a variety of skill sets,” Feitzinger says. “The gap in the challenge between the two classes is just too big not to have anything in between.”

In particular, Ryan suggested that the math department needed to change around some of its courses. He believes that there is too much difference in rigor between Analysis and Introduction to Analysis and Calculus.

Students like Feitzinger, Lee, and Relan are among those affected by these changes, but others in the Paly community have their own opinions on the matter.

Students aren’t the only ones who have some complaints about the current laning system. Some of the faculty at Paly also don’t agree with some of the methods around laning. “I think that laning is a way of specializing and that specializing can become narrow,” says Erin Angell, Escape Literature teacher in the English department. “It can potentially restrict some students’ potential in academic achievement.”

Conversely, like students, teachers are divided in their opinion, with some standing behind the difference in low and high lanes.

“It’s like night and day,” says Misha Stempel, a Math Department teacher who has taught both the upper and lower lanes over her years at Paly and supports a noticeable gap between higher and lower classes. “If we make the lanes too similar, why would we have two different lanes?”

In the past, students who were enrolled in Geometry, a prerequisite math lane to Trigonometry and Algebra 2, were prepared and expected to take AP Calculus AB, the lower of Paly’s two highest calculus math classes largely reserved for seniors. Now, they are exempt from trigonometry altogether after taking Geometry. According to Stempel, the depth and vigor difference between math lanes used to be significantly lower, with the extra support and advantage in lower lanes being a more recent change implemented by the administration in order to better assist struggling students.

Perhaps now it is appropriate for Paly to review their decision of establishing such a difference between upper and lower lanes. Overwhelming student and faculty feedback points to the administration at Paly to not only consider opening new middle lanes, but to re-address how they choose to define and divide these lanes that often dictate students’ lives.

As for the present, “There are some ways to improve on the difference between regular, honors,  and AP courses,”  junior Kasra Orumchian says. “But, we need to be careful in making these changes because they could cause unwanted consequences.”