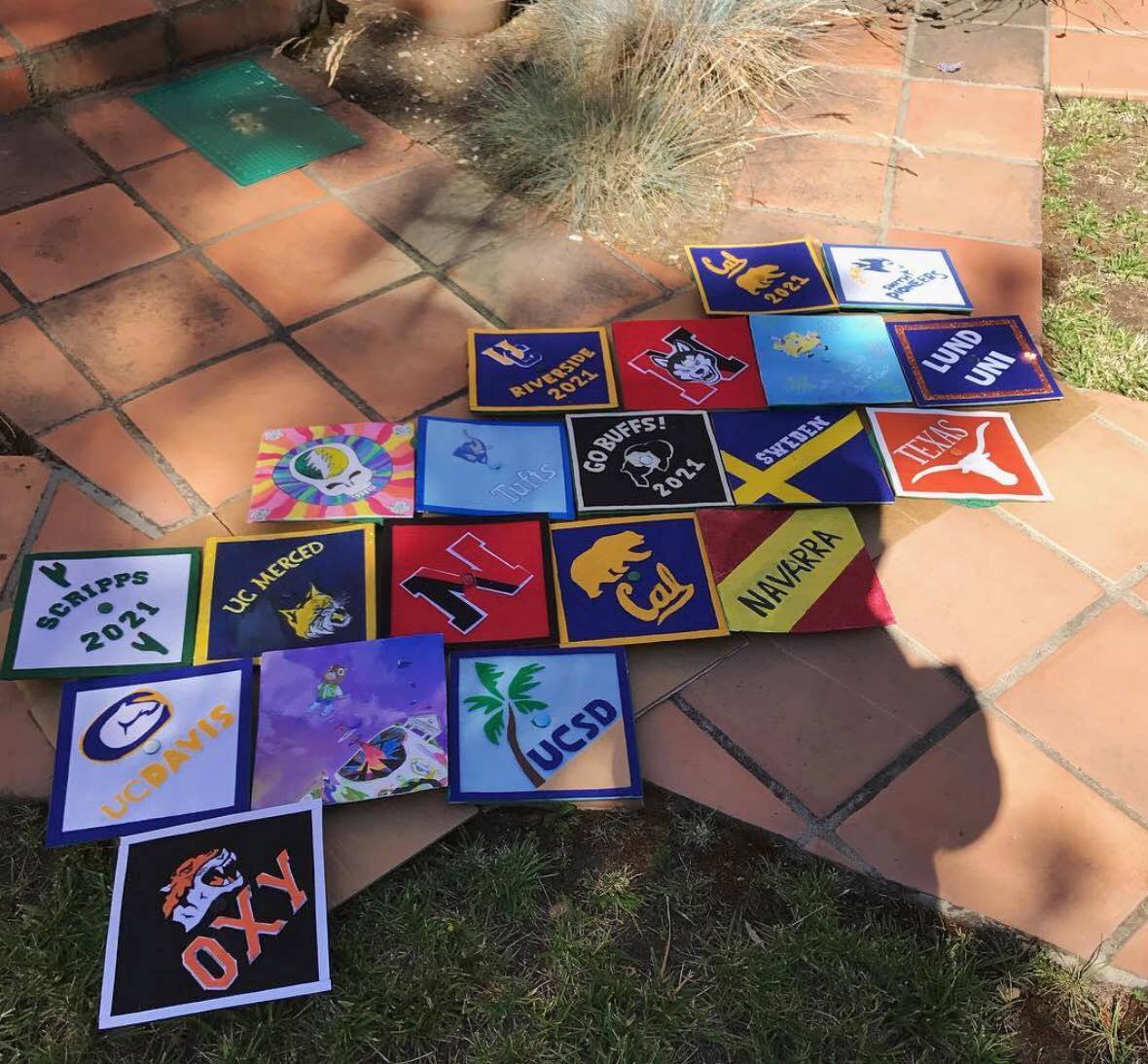 The Cap Controversy: A Symbol of Celebration Or Competition

Piercing whistles and warm cheers resonate from the crowd of proud parents and relatives as the graduates fling their caps in the air and flashes of bold college logos glint in the sun.

It looks picturesque, but the reality is that graduation, a day that is supposed to celebrate and recognize students’ high school achievements, has become enshrouded in controversy over cap decorations with college logos.

In college-centric Palo Alto, some argue the practice perpetuates the expectation that students will attend a prestigious college in their post-high school career.

Although Palo Alto High School requires all students wear green graduation gowns instead of having boys wear green and girls wear white, the school does not regulate how students decorate their caps.

Over the years, it has become commonplace for students to embellish their hats with inspirational quotes or showcase  college logos through creative designs.

Senior Tanli Su believes that this tradition of decorating caps is a positive custom and should be upheld, a reasoning that factored into her decision to decorate her graduation cap with her prospective college.

“Decorating graduation caps with college logos is a fun tradition and it’s a nice way to represent your transition from high school to college by wearing both your Paly cap and gown and your future college decorated on your cap,” Su says.

“It should be welcomed and encouraged to decorate however you want, whether it be any post-graduate plan or just freeform decorating for fun.”

Unlike Paly, Gunn High School, restricts what students are allowed to put on their caps by prohibiting the placement of college logos.

Alvin Hom, ASB President of Gunn, believes the ban was put in place to avoid creating divisions among students and competition. For these same reasons, Gunn  and Paly do not have a valedictorian.

“I understand the reasoning, but personally, I think people should be able to put their colleges on their caps, since we’ve all worked hard and we should be proud of our accomplishments,” Hom says.

Senior Lauren Wagner was initially skeptical about the tradition of decorating hats because she was self-conscious about her future school compared to others.

“I was really nervous for when were going to decorate our caps because I knew everyone was going to be like, … ‘Oh I’m going to this great college,” Wagner says. “I was very not pro doing that.”

However, Paly alumna Ibby Day, class of 2016, believes the degree to which students are proud of their accomplishments greatly varies.

“During my graduation, I had plenty of classmates … pursuing non 4-year college or university plans,” Day says. “What I think I failed to recognize was that some of my classmates were ashamed.”

ASB President-elect Vivian Feng shares similar sentiments with Day. She believes that to address community pressure on students, earlier steps in the college process must be addressed.

“Something  as simple as having more smaller name schools come visit campus, or having information about the … differences between a selective school and one that is not so selective.” Feng says.

Instead of banning logos, Feng believes the solution is to welcome all decorating with open arms.

“Graduation is a time when a high school class comes together to celebrate one another’s successes and future endeavors,” Feng says. “There is no need for uniformity among the students: whether they all decorate it with prospective colleges or not, I think that it should be the student’s individual choice.”