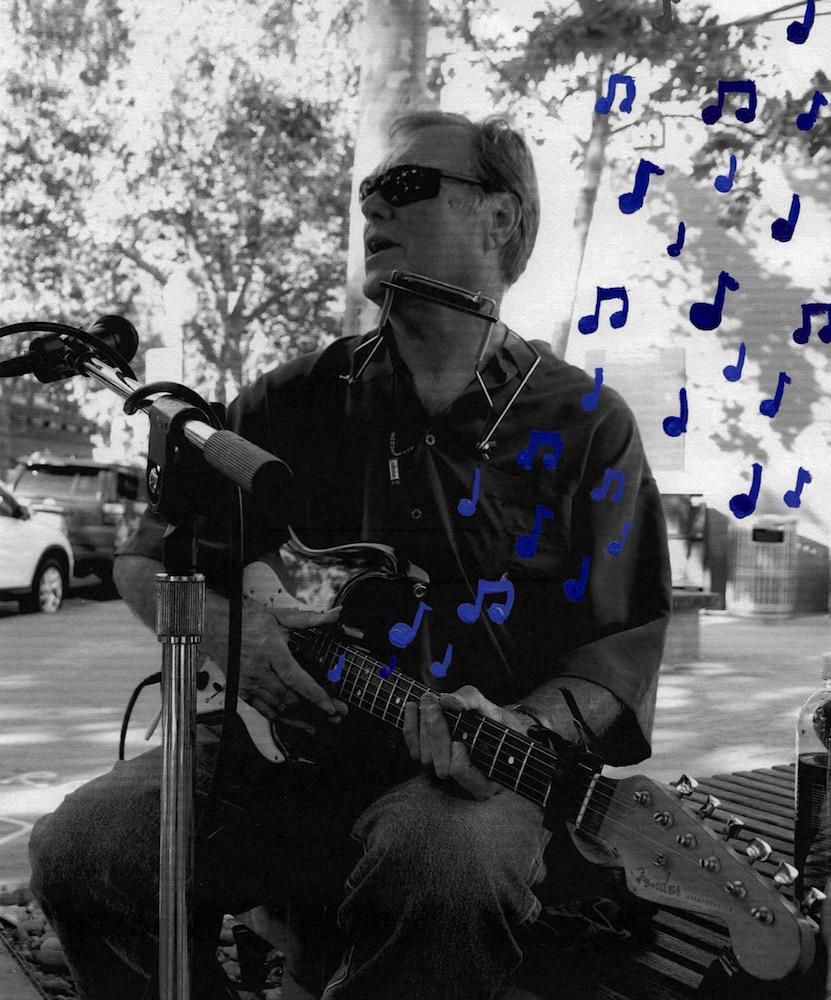 The Busker of Lytton: keeping the blues alive in Palo Alto

TODDLERS DANCE IN A FOUNTAIN,teenagers enjoy their pizza and old friends gather by the performer at Lytton Plaza. Music fills the air, and for a moment, everyone is brought together by the strum of the guitar, the hum of the harmonica and the voice of the busker.

His name is Dave Hydie, but almost none of his spectators know this. He is a musician who plays nearly every day at Lytton Plaza, bookended by beginnings and ends in Palo Alto. Hydie has always performed for people, traveling the country and playing guitar and harmonica for anyone who would listen. He does not play in the hopes of fame or riches, but rather because of his love for music and performing.

To put your passion on display to the judgement of the world takes guts, and the busking scene can get competitive. But Hydie enjoys every second without getting caught up in nerves and stage fright. Ever since his first performance, he’s been a natural in the spotlight.

He remembers it vividly: the sixth grade talent show at Ross Elementary School, where he played “Everything’s Coming Up Roses,” a show tune from the musical “Gypsy.”

“Just be out there and inspire younger musicians and just keep it going.”

Hydie has since parted from the show tunes genre, instead favoring the blues, a music genre originating from African American culture in the Deep South around the turn of the 19th century.

Hydie says he still recalls one of his first encounters with the blues. He was eight years old, watching Sesame Street. The guest host of that episode, T-Bone Walker, would later become one of his favorite blues players.

Hydie was born in 1952, about a mile away from Lytton Plaza on Oregon Expressway, then known as Oregon Street, however, the house has long since been torn down. At 12, Hydie began playing harmonica, but says his high school years were when he became serious about music.

After high school, Hydie traveled to Alaska in a flatbed truck with a brigade of Berkeley students and his future wife. There, he worked in Anchorage cleaning salmon. Alaska had a very limited blues scene, but Hydie still continued to play harmonica and guitar.

At 22, a now married Hydie moved to Iowa and began playing with The Son Seals, a blues band in Ames, Iowa. However, after a year, Hydie separated from his wife and moved to Chicago with the bass player from The Son Seals.

“I went to these clubs in Chicago and pretty much was on the street for … three months,” Hydie says.

Hydie traveled all over America, and had an assortment of jobs including cab driving, truck driving and cowboying for a cattle company. However, he never stopped playing music and writing original songs such as “Racist Blues,” which recounts the discrimination he witnessed across the U.S.

In 1976, Hydie decided to move back to the Bay Area, where he says he found a dynamic blues scene. Although there continue to be blues festivals today, the genre saw its peak in the ’70s, according to Hydie. He was even able to play alongside blues legends like Sonny Rhodes and Luther Tucker for several years in Palo Alto.

“I hung around him [Tucker] for about a year or two and learned a lot,” Hydie says.

The Palo Alto blues scene is history that has seemingly been forgotten by all except those who were there to witness it. Before Palo Alto became the tech town it is today, Hydie says music was a defining part of local culture. Hydie also remembers seeing Muddy Waters, the father of modern Chicago blues, twice on California Avenue in the ’60s and ’70s. 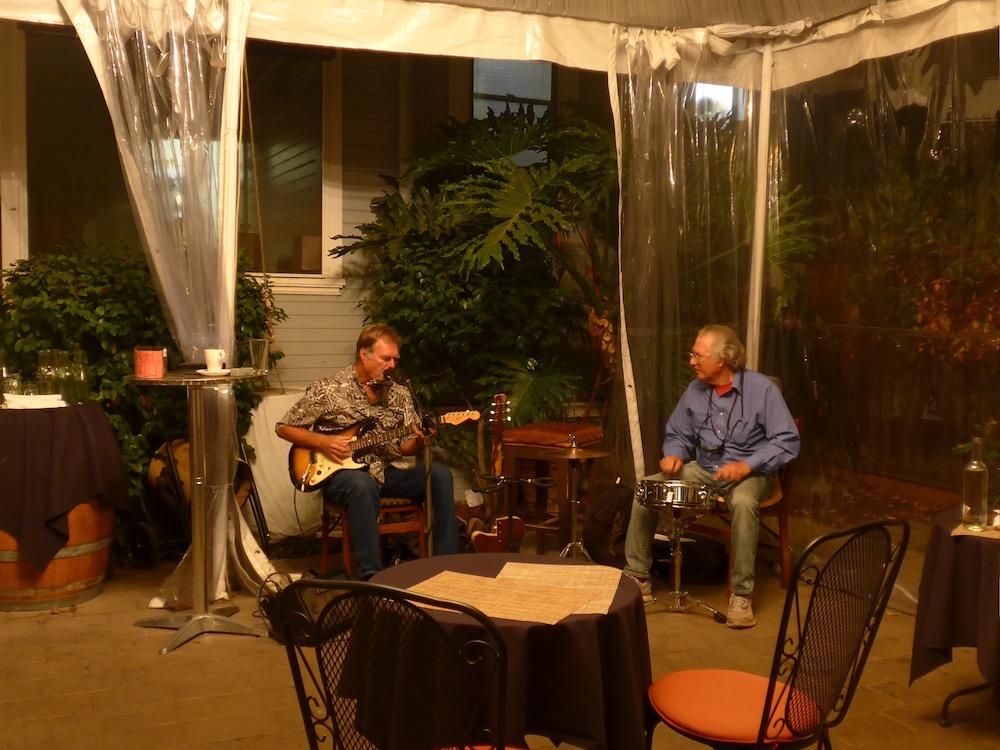 Hydie plays the blues as locals dine at Vinolocale off of University Avenue. Hydie plays there the first Wednesday of every month. Photo by Ella Thomsen.

For Hydie, Palo Alto will always be home. Despite its dwindling blues scene, he says he chooses to stay because of his family. Now, when Hydie is not playing music, he takes care of his mother or goes fishing.

Music is a family affair. He inherited his passion for music from his mom, a pianist, who always played show tunes around the house while he sang along.

Hydie has since passed his love for music on to his son, a Paly alumnus, who is now part of a band called The Hallway Ballers, and to his daughter, who tags along to his gigs or events.

For Hydie, music has been “a great way of communicating and expression, anything from anger to love.”

It’s been his passion and dream ever since he first heard T-Bone Walker grooving out on Sesame Street, and he has no intentions of stopping. Now, Hydie says he hopes to “just be out there and inspire younger musicians and just keep it going.”

To a certain degree, music is a part of everybody’s lives, whether it be to dance to or study with. However, to pursue music as a career is a dream often given up on because of how competitive it can be. But as someone who has never stopped dreaming, Hydie encourages those passionate about music to surround themselves with the music that speaks to them.

“Listen, listen, listen. You’ll know where your groove is,” Hydie says. “If you’re moved by it, then you don’t have a choice.”   v