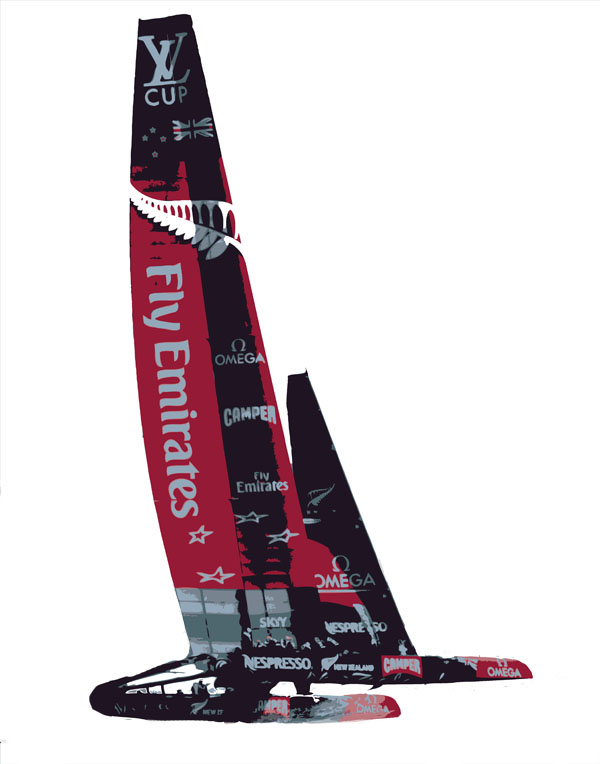 In September, the biggest sailing event in the world took place right here in San Francisco Bay. The America’s Cup, the oldest international sailing competition in the world, was hosted by the Golden Gate Yacht Club, the yacht club of Oracle Corporation C.E.O. Larry Ellison.

Ellison’s team, Oracle Team U.S.A., won the Cup in 2010 in Valencia, Spain, and as the defending champions, they were given the privilege of choosing the location for this year’s contest.

In an effort to clean up the waterfront and generate money for the city of San Francisco, Ellison wanted the races to be visible from the shore by hosting them in the San Francisco Bay. This was new to a competition that has traditionally been held miles offshore in open ocean.

He also aimed to fuse cutting-edge technology with the generally old fashioned sport of sailing, creating the largest and fastest racing catamarans (boats with two hulls) ever built to be used in the competition.

To the chagrin of many San Francisco residents, tax money went towards paying for the America’s Cup.

“People that may have lived right next to the water but have never actually gone on it except maybe in a speedboat are now seeing these cool, $10 million boats going against each other, and it has created excitement about sailing,” said Molly Vandemour, a 2012 Olympic sailor who also participated in the America’s Cup as a commentator on Marina Green.

This year, Viewers saw the most radical boats ever used in competitive racing. Named AC72s, the boats used in the Louis Vuitton Cup and America’s Cup Finals were 72-foot-long catamarans with 131-foot-tall masts.

Instead of traditional sails, the boats had “wings,” which are rigid, hollow structures, optimized for aerodynamics.

They have a joint in the middle which allows for flexibility. These boats are designed to move at about 35 to 40 mph, but have been recorded moving at almost 51 mph, an incredible speed, especially for a yacht.

Built to travel on average 1.8 times faster than the wind, these boats perform incredibly well even in light wind. From a technical standpoint, the boats are loaded with senseors and all sorts of state-of-the-art tools and materials.

Vandemoer, who is also the director and coach of the Peninsula Youth Sailing Foundation in Redwood City, discussed the way these radical boats are changing the face of sailing.

“If you look at our own learn-to-sail program, we do a ‘build-your-own boat’ race, and the boats that these kids make have to be made of recycled materials and stuff they find in their trash bin,” Vandemoer said. “All the boats these kids make look like the America’s Cup catamarans. That’s a pretty cool sign.”

To prepare themselves for sailing these massive boats, the America’s Cup crews first raced AC45s, 45-foot versions of the AC72s. They are slower, but provide the same type of experience as the AC72s.

Despite all the excitement surrounding the AC72s, not everything went as planned. On May 9, during a practice run, Artemis Racing’s AC72 capsized, trapping team member and Olympic gold medalist Andrew Simpson underwater. He was submerged for about ten minutes, and despite efforts to resuscitate him, he died.
Controversy surrounded this year’s America’s Cup.

Many were critical of the fact that sailors did not have to be citizens of the country they sailed for, making the competion feel mercenary. A majority of the sailors who took part in the competition were from New Zealand or Australia, both of which are hot-beds for sailing talent. Only three of the 24 members of Oracle Team U.S.A. were from the United States.

In addition to underwhelming number of teams, the defending champion, Oracle, was found to have placed lead in their hulls to increase stability. This was an intentional violation of the rules, and due to this infraction, Oracle was given a two-race handicap. In order to win the America’s Cup Finals, they needed 11 victories instead of the regular nine.

Emirates Team New Zealand was victorious in the Louis Vuitton Cup, and faced Oracle Team USA in the America’s Cup, a best-of-17 competition. In the first several races, it appeared as if Oracle Team U.S.A. was no match for Emirates Team New Zealand. From Sept. 7 to Sept. 18, New Zealand had a commanding lead in the competion, winning eight of the 11 races. This put the score at 8-1, accounting for Oracle’s handicap.

Miracurously, Oracle went on an eight race win-streak, eventually defeating Emirates in race 19 and defending their title in the America’s Cup.