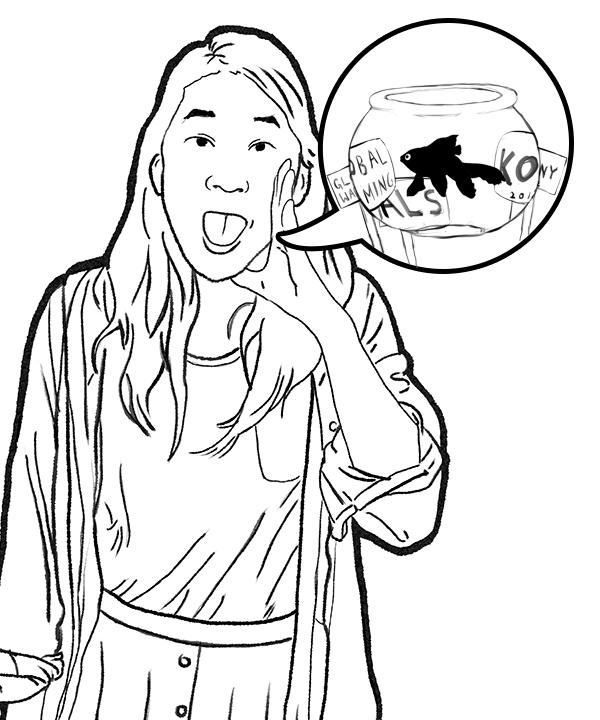 That’s What Shi Said: Well, that was fast – Society has a goldfish attention span when it comes to activism

As a tech savvy teenager with her finger on the pulse of the latest news and trends on the Internet, I lead a busy and important life. Since joining the vast network of social media, I have called for the arrest of Joseph Kony, worried for the livelihood of approximately 200 kidnapped girls, seen countless bare midriffs exposed in the name of ALS and lobbied for the incarceration of Ferguson officer Darren Wilson, all from the comfort of my own home. Each wave of activism is accompanied by a surge of identical profile pictures swamping my newsfeed, lasting for about two weeks before the images revert back to saturated smiling faces.

Oftentimes, people will eagerly support a cause, throwing their virtual selves into the thick of the hashtags and meaningful statuses, but will then desert the issue before a solution even begins to emerge from the dust of the media blitz. In the same way that goldfish can, according to urban legend, only pay attention to something for three seconds before their short-term memory times out, it seems that people are only capable of caring about a social justice issue for as long as it’s in vogue before the topic is left to die in the cold like an inadequate Spartan baby.

This sort of behavior doesn’t always stem from a lack of sympathy; most people don’t even realize the nature of their short-term activism. The blitz and split pattern is common among those with privilege, who often don’t have to deal with the direct consequences of the issue they are fighting for. They pat themselves on the back and bask in the glow of their recently posted heartfelt status, priding themselves on stepping up, caring about others and making a capital-D Difference. While the victims of a problem are fighting and screaming their throats hoarse at demonstrations day after day, those unaffected have the luxury of giving and taking away their support on a whim.

The short attention span isn’t necessarily anybody’s fault. There are too many things wrong with the world for an individual to be able to focus on every single one; it’s physically impossible to lead searches for the lost Malaysian airplane while simultaneously helping Emma Sulkowicz drag her dorm bed around Columbia and traveling around the world curing Ebola while on a bike to stop global warming.

Instead, people must recognize the underlying issues that serve as the cause of each recent event. They should realize that racism is not dead in America like we sometimes pretend, and that sexism is an issue that women face every day. They can be mindful of illnesses that don’t often make headlines, and they can remember that there are people in the world grieving for those whose livelihoods are currently at stake. While it’s ridiculous to expect people to take direct action in every single social justice issue, if we could all just take the time to examine each event, the resulting awareness can help prevent further incidents of intolerance.

It’s only natural for everyone to switch interests and focus on other topics — so long as we don’t completely forget the subject we’re moving on from. The key to making short-term activism count lies in remaining aware of issues that other people may face and being ready to defend and support them when the time comes. As removed as we often are from such issues, when big events make the news, what’s most important is not the sudden spike of passion and public outcry but the long lasting awareness and support afterwards.