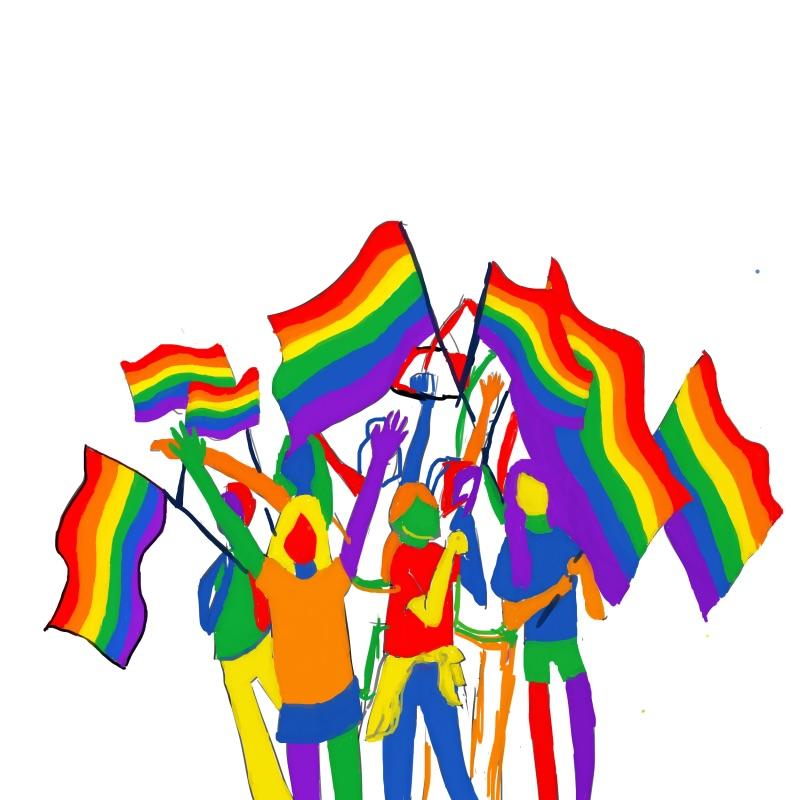 With the LGBT movement gaining speed as we edge further into the 2000s, Pride parades seem to break record numbers of attendance every year. It’s not that there are suddenly more LGBT persons ­— although certainly more have come out. Instead, I would attribute this rise in attendance to the growing awareness and support this community has received. Palo Alto High School students are part of the phenomenon; every summer more and more posts appear on Instagram with students, many of them non-LGBT, posing, rainbow flags of San Francisco’s Pride Parade visible in the background.

First and foremost it is with gratitude that I thank you for taking the time out of your vacation to travel up to the city and show your support for this movement. The LGBT community has long fought for the recognition and validation that you show by attending.

We are validated, too, by the appearance of a more traditionally self-centered group: corporations, who have overarchingly commercialized these events. Now, center-stage banners spelling out “SF Pride Parade 2017” are also embellished with brand logos and advertisements — at the 2017 Pride Parade in Columbus, Ohio, the lead banner featured prominent advertisements for the Bud Light corporation, which is listed as the first sponsor on Columbus Pride’s official website.

When I first set out to write this article, I was skeptical of the intentions these companies had in displaying their logos at Pride. However, while the word itself holds stigma, the commercialization of these events has proven a positive sign for the LGBT community.

“However, while the word itself holds stigma, the commercialization of these events has proven a positive sign for the LGBT community.”

Franco Finn, West Coast Marketing Manager for Alaska Airlines, a sponsor of Pride parades throughout the west coast, said Alaska’s support of the LGBT movement is ongoing and genuine.

“We’re trying to be as diverse and inclusive as an organization, not only in our workforce, but, you know, for LGBT initiatives out there,” he said.

Not only has Alaska Air Group CEO Brad Tilden spoken in support of LGBT inclusivity in Boy Scouts of America, the airline has committed to the LGBT community in many other ways. They sponsor Frameline, the longest running LGBT film festival in the Bay Area, as well as the Seattle Gay Men’s Chorus and the Three Dollar Bill Cinema, a film company in Seattle, Washington.

The company also set up a resource group for LGBT employees and supporters.

“They’re called the GLOBE [Gay Lesbian Or Bisexual Employees] team… a taskforce that is designed to specifically handle, you know, Pride initiatives, any LGBT initiatives, and that sort of thing,” Finn said.

He describes the relationship between Pride parades and corporations as symbiotic.

“At the same time they need us as much as we need them,” he said. “If Pride all across the…  globe and everywhere else is going to survive they need to have partners and supporters and I think this is a great platform for companies to lend themselves.”

I am thrilled that this Fortune 500 corporation is proud to have the opportunity to support a movement focused on equity, something Finn said is a value the airline tries to uphold.

“We’re long time supporters of the LGBT community and we, we pretty much remain committed to a more equitable society,” he said. “That’s really what we hope to accomplish by putting…  our tag out there and our logo when we associate with Pride.”

I commend both corporations and individuals who participate in Pride. Founded in 1970 after New York police officers raided an openly pro-LGBT bar, these parades were established to empower and celebrate the LGBT community, as well as to provide a forum to voice political opinions and protest the oppression LGBT individuals still face today.

If you are unsure how to be a meaningful ally, the path for a Paly student is not the same as that of a global airline, but it is most definitely worth pursuing. Start with your local LGBT organizations. Attend Paly’s Queer Straight Alliance Club and ask for advice on how to support the movement.

To corporations: before choosing to advertise at a Pride Parade this year, make sure you support this community on a daily basis. Donate to LGBT charities, make efforts to diversify your workforce and participate in community service that benefits this population.

Now get out your glitter, confetti and rainbow flags and I’ll see you on Market Street this June 23rd.