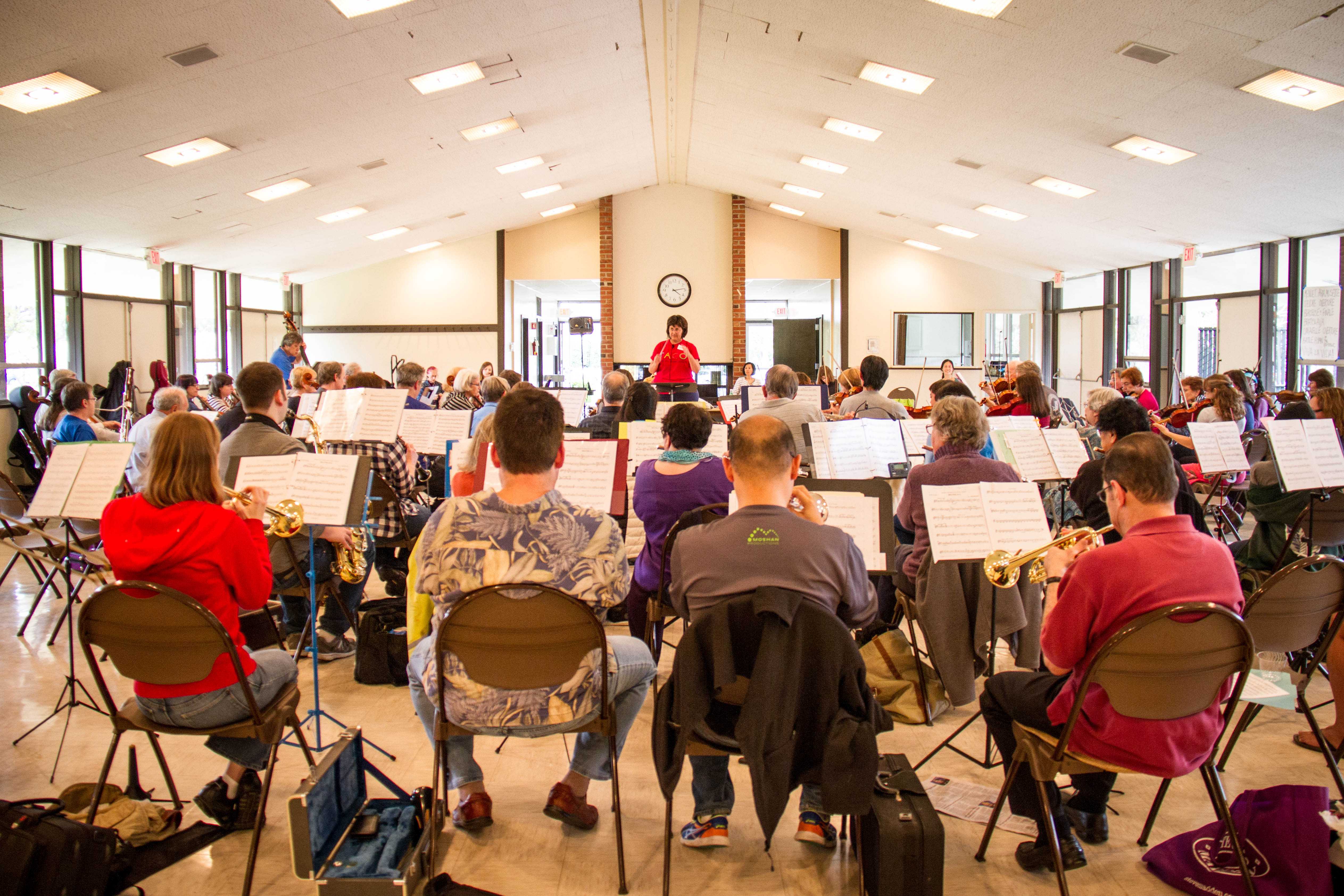 Laughter erupts in the warm dimly-lit room, and Cathy Humphers Smith quickly taps on the her stand with her baton, calling for silence. “I thought something was a little bit off,” she says with a laugh. “Let’s try this at a faster tempo.”

Orchestra members agree, and raise their instruments to give Stravinsky’s “Berceuse and Finale” another attempt with the conductor’s words in mind. A myriad of different sounds once again fills the room, and the sounds of many instruments interweave into a beautiful melody.

The Terrible Adult Chamber Orchestra, known in the community as TACO, performs at the Los Altos Youth Center on the last Sunday of each month. The group is composed of musicians with a wide range of ages and musical abilities, unifying people from the far reaches of the Bay Area, recent college graduates and senior citizens hoping to stay engaged with music. Unlike most adult orchestras, TACO has no regular rehearsals and instead relies on the sight-reading abilities of its members. This unusual aspect removes much of the stress associated with performing in an orchestra and provides a more laid-back environment for musicians with less time to dedicate to practice. The musicians are encouraged to support and help each other.

When the piece is finished, musicians pack up their instruments and retreat to a side room, where a table of food has been laid out. Orchestra members snack on Girl Scout cookies, cheese and wine as they converse with friends old and new. Laughter rises and falls, and a friendly chatter fills the room. Such is the family-like ambiance of this community-based ensemble. 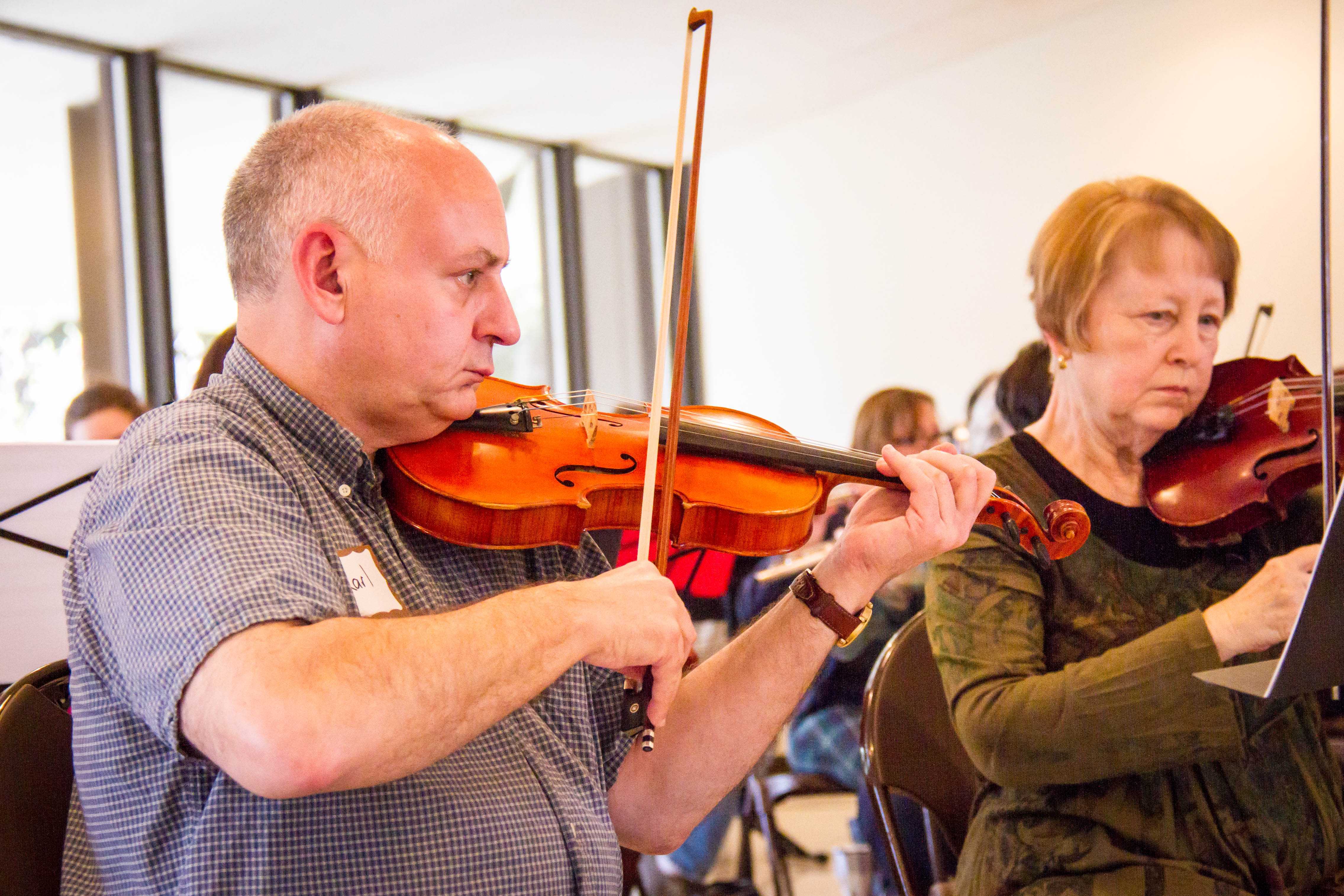 Violinist Peter Vancleef concentrates on his music while playing an instrumental version of “Viva la Vida” by Coldplay. Photo by Emma Cockerell.

How to Make a TACO

Cathy Humphers Smith, TACO’s founder and conductor, first conceived the idea of a non-rehearsing orchestra in 2011. Previous musical experiences had disappointed her in that they didn’t provide positive environments for musicians who were less experienced.

“My husband and I play music and enjoy playing music but also have had experiences ourselves of not being good enough to play at the level we wanted to,” Humphers Smith says. “You audition for orchestras and you don’t always get in. I had a piano teacher who was hyper-critical and after years of playing through college, she told me I lacked the basic fundamentals. It was crushing, and I didn’t play for four years.”

With those negative and discouraging experiences circling in the back of her mind, Humphers Smith tried to think of new ways to engage like-minded people in music.

Several years working as a clinical social worker for families and couples made Humphers Smith’s perspective on the importance of music grow more pronounced. Her desire to help others ultimately led her to found TACO.

Humphers Smith based TACO on an orchestra in Edinburgh called the Really Terrible Orchestra, which embodied all of the qualities that she had envisioned.

Excited, she selected a few pieces of music, called together some friends on a Sunday afternoon and modeled the meeting after RTO’s rehearsals. The meetings continued for several months; friends invited friends, and what had started out as a few musicians in Humphers Smith’s living room grew into a large group of 50-60 musicians. What was once wishful thinking had finally become a reality.

With the group’s increasing membership came a need for a larger performance space, so with the city’s approval, TACO upgraded to the spacious Los Altos Youth Center. According to Humphers Smith, the group has expanded since then, and currently fosters about 80-100 musicians from locations all around the Bay Area. 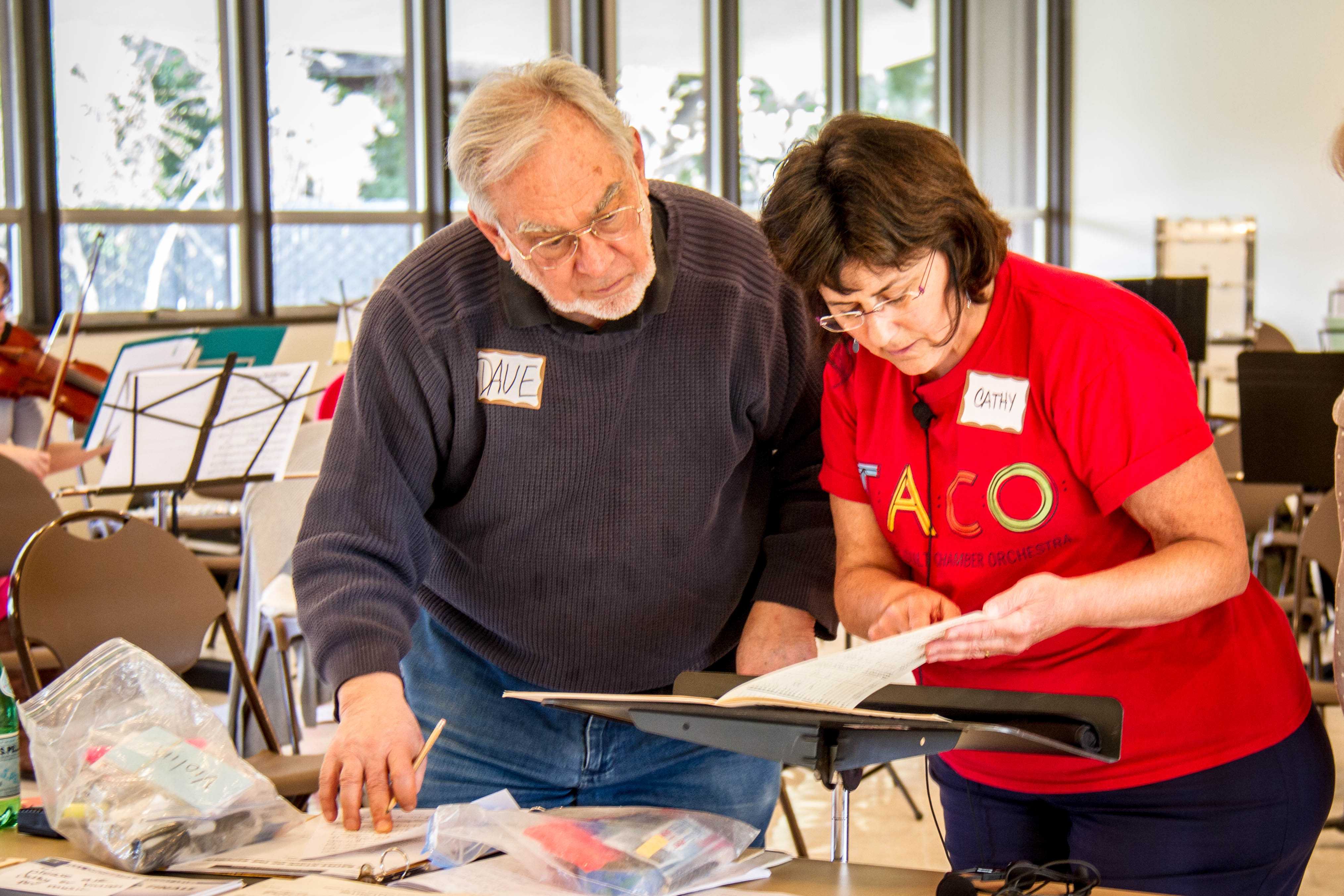 Director Cathy Humphers Smith goes over the sheet music for the next song with a member of the orchestra called Dave. Photo by Emma Cockerell.

The Ingredients of the TACO

The group’s relaxed policy regarding attendance and musical ability has brought together a diverse group of people. Each week sees a new set of musicians; veteran members play alongside first-timers, making TACO a melting pot.

The ensemble’s February performance was violinist Peter Vancleef’s first time attending. Vancleef, who started learning the violin 10 years ago with his daughter (who was in kindergarten at the time), had come at a friend’s recommendation, and felt thoroughly impressed.

“I didn’t know what to expect, but it sounds much prettier than I expected,” Vancleef says. “It’s been a pleasant surprise that it sounds nice, at least from where I am — I don’t know how it is if you are outside.”

Violinist Karl Schwartz, who introduced Vancleef to TACO, is a veteran member; he joined three years ago when his daughter started learning the cello. Schwartz, who played for nine years as an adolescent, returned to the instrument four years ago after a long break. He joined TACO because he enjoys the relaxed atmosphere, which accommodates his limited ability.

“It’s fun if you can survive it,” Schwartz says. “There were a few [pieces] that are quite a challenge, but I like the fact that there’s not a lot of pressure to get everything perfect … something that is common to a lot of community orchestras.”

TACO’s self-proclaimed “foboist” Hillel Hachlili is also a long-time member of the group.

“I played the clarinet, and we didn’t have any oboe,” Hachlili says. “So I brought the clarinet and I said I would play the oboe part. It worked out really nice because finally we could hear the oboe part because I was playing it. After that, I thought to myself, I am the fake oboe. So since then, I have been the foboe.” 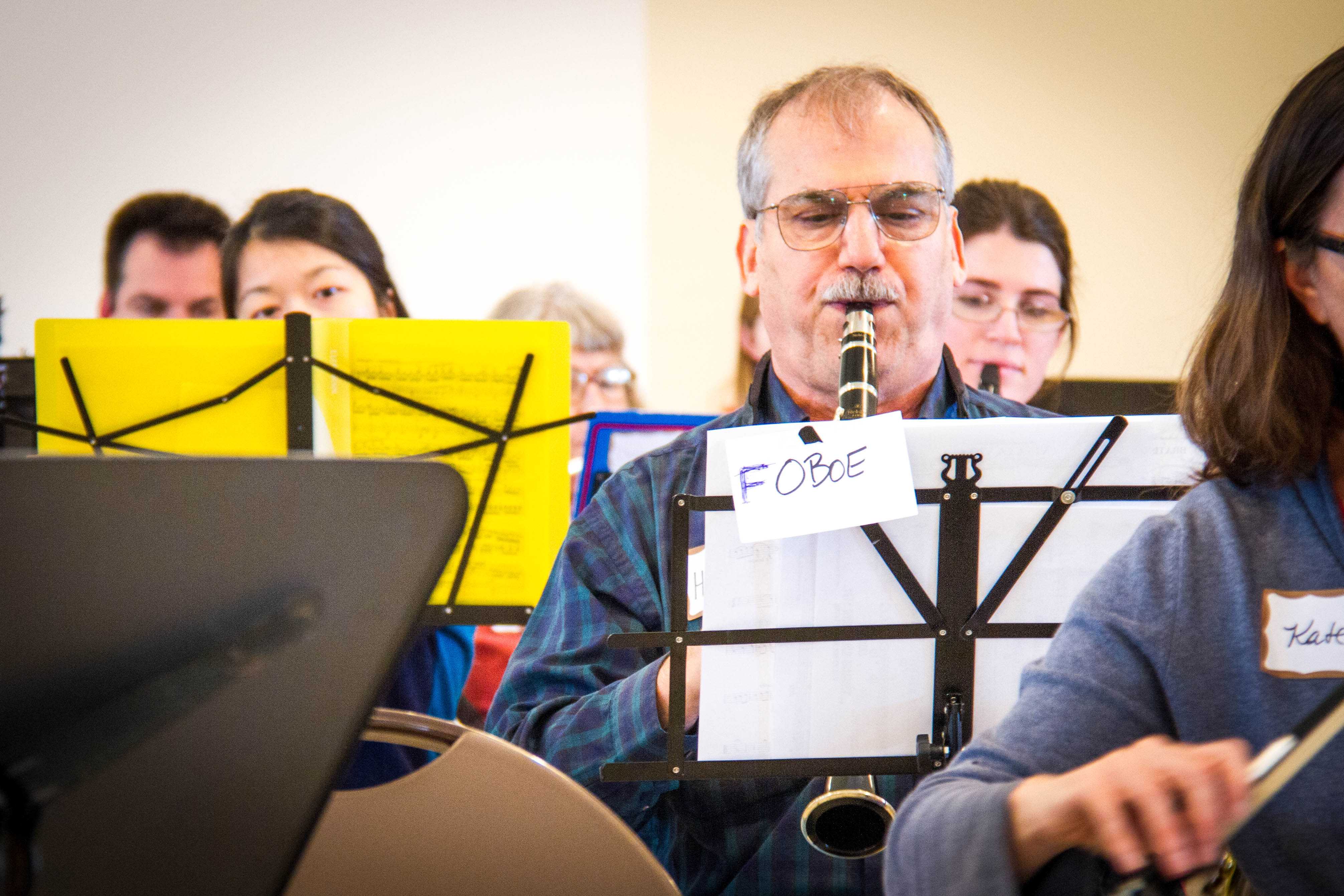 Other long-time members of TACO, like flutist Ola Cook, have taken an interest in learning more about other similar organizations. Since joining, Cook decided to join an additional band and has played with the Really Terrible Orchestra in Scotland.

“I actually went to play in Scotland two years ago at Fringe Festival with the Really Terrible Orchestra, which is kind of the thing that TACO developed because of,” Cook says.

In the future, Humphers Smith hopes to host other TACO-

like groups from the United States, including Berkeley’s Really Terrible String Orchestra and New York’s Really Terrible Orchestra of the Triangle. She looks forward to many more years of spreading TACO’s message and making people feel good about their  abilities.

“I’m tuned into self-esteem and people doing things that make them feel good and people finding richness in their life and their soul,” Humphers Smith says. “That’s the piece of it [the idea of TACO] that I’ve always had.”