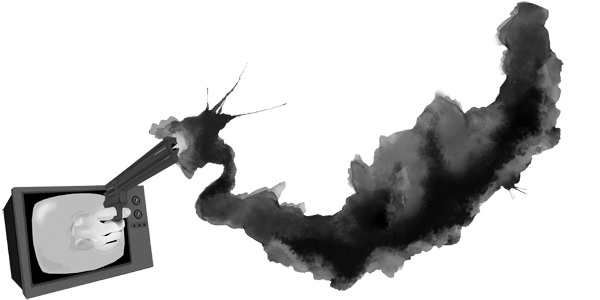 A study done by the American Academy of Pediatrics, the average 18 year old will have witnessed 16,000 simulated murders and 200,000 violent acts on television.

The nation’s focus has turned to the issue of gun control in the wake of the Newtown, Conn. school shooting that left 27 people dead, including the shooter Adam Lanza. Some think that banning guns will solve our problems. However, in reality, banning guns won’t solve our country’s problems. There are many more issues that are to blame.

We cannot continue to place all the blame for violent crimes on lack of adequate restrictions on assault weapons. There is so much debate about which parts of the weapons, such as the magazines, should be banned in the United States. Many people are also calling for a ban on assault weapons and rifles, when in reality, most gun crimes are carried out with a handgun.

What we have to keep in mind is that people did not start killing people as soon as guns were invented. People have been killing each other with different tools for as long as our species has existed. Guns are just tools. Many people own and use guns responsibly.

Our violence-glorifying culture does nothing to stop violence, weapons or no weapons. We live in a country where everyone accepts violence as commonplace. Network television shows such as “CSI: [You-Fill-It-In]”, “NCIS”, and many others, as well as popular video games such as the “Call of Duty” and “Halo” franchises have created a society where violence is omnipresent.

We as American citizens need to assess the state of our society and our media. The level of violence and gore present in modern crime television shows is appalling. It seems as if there is a competition among the different broadcasters to see who can air the most gruesome plot lines, content that the average person would never think about otherwise.

If the people who wrote these shows weren’t working in show business, they would make some pretty convincing serial killers.

Studies like those done by scientists at Rutgers University have shown that violent video games such as the “Call of Duty,” “Halo,” and “Grand Theft Auto” franchises do not directly affect people and make them more prone to violence. Dr. Patrick Markey of Rudgers University says it takes a certain personality type to admire violence from video games, one belonging to someone who already exhibits violent behavior.

A pacifist will not suddenly become violent after playing a violent video game. What these games do is make violence seem commonplace. They remove the power of the actions we see. Violence is no longer a heinous act, it is just a button clicked in order to complete a goal or reach a checkpoint.

Other games, such as “Dead Space 2” have been marketed around the fact that they are over-the-top violent and gruesome. One of the slogans for “Dead Space 2” was “Critics love it, but your mother will hate it,” due to the immense level of violence and gore. Young, impressionable children should not be exposed to video games like “Dead Space 2.” They are not mature enough to realize the implications of violence.

I do admit that I have played violent video games and watched violent movies, but the television shows and movies that feature horrifying, brutal events offend me. Many depict gruesome scenes that often involve serial killers, deviant behavior and antisocial personality disorders.

Shows like this clearly shouldn’t be restricted legally. They aren’t directly threatening any people in real life. It’s not bad enough to where it violates the law.

However, out of respect for events that have happened and for the sake of society, broadcasters should be encouraged to air less macabre content. The difficult part is that ratings drive the content of prime time television. It appears we have a population fixated on violence, so we need to break that fixation.

There is no simple solution to this problem. I would say “cancel all TV shows that include excessive violence and gore,” but where do you draw the line? People want to watch shows that push the borders of their own morality and gives them a feeling of adrenaline as they watch it.

We should take a step back and think about the atmosphere we are creating for future generations. We as a nation cannot honestly support peace if all we show on TV and in movies is death, psychotic behavior, hatred and violence.

Such sensationalism has played a large role in the media ever since the dawn of the entertainment industry, but at what point should we sacrifice the viewer’s mental well-being for money? We should not live in a country where we can be shocked by a terrible, tragic event and then turn on the television and see the same thing happen in an episode of “CSI.” To quote Oscar Wilde, “Life imitates art far more that art imitates life.” People are impressionable, and if something is presented to them they may tend to reproduce it.