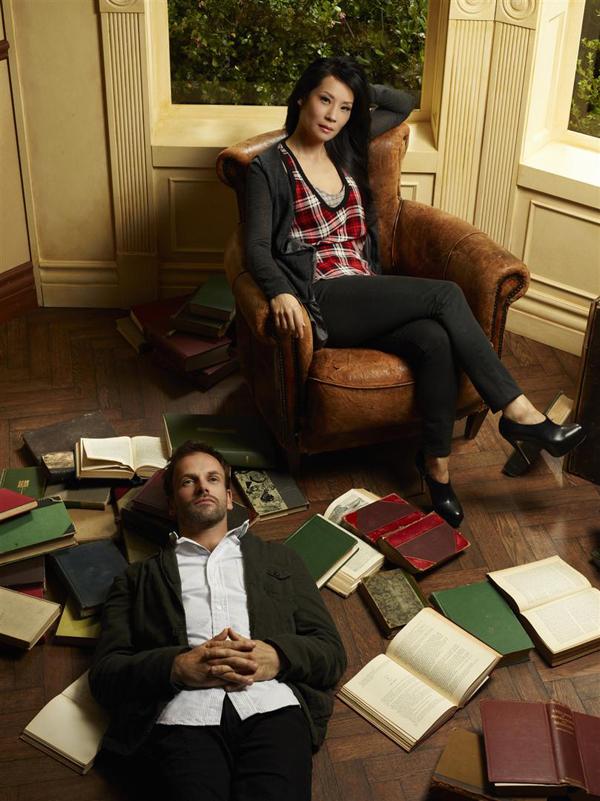 It’s every Sherlock Holmes purist’s nightmare: Holmes is a sexy leprechaun who has lots of sexy sex, Watson has a uterus, and (deep breaths, guys), they’re in…America.

Even the most blasphemous of fan fiction writers ­— guilty of such monstrosities as “50 Shades of Sherlock” (Don’t believe me? See rule no. 34 of the Internet) — would never stoop so low. But someone did. And that someone is CBS, with “Elementary”, its new modern-day adaptation of Sherlock Holmes that airs 10 p.m. every Thursday.

Jonny Lee Miller (left) stars as Sherlock Holmes and Lucy Liu (right) stars as Watson on the new television series ELEMENTARY, premiering Thursdays, 10pm ET/PT this Fall on the CBS Television Network. Poor CBS. All it wanted to do was sit at the cool kid’s table. It even came up with a cute little tagline: “New Holmes, New Watson, New York.” I mean, how hard can the actual writing be? After all, BBC gave Sherlock Holmes an iPhone, and Guy Ritchie made our titular detective a badass of Chuck Norris-like proportions to critical acclaim, so it should be pretty easy, right? Right, guys? Wrong. Newsflash: A race lift and a sex change does not a “new Watson” make and “British” is not a character trait.

Holmes’ and Watson’s portrayals either make or break a Sherlock Holmes adaptation. The original stories weren’t particularly thrilling as far as mysteries go, but they became such a hit because of Sir Arthur Conan Doyle’s sarcastic, cocaine-injecting, borderline-Asperger’s sleuth and his faithful everyman sidekick. Screw up the characterization, and you have nothing but an unlikely whodunit on your hands. And unfortunately, that’s exactly what CBS does.

The Science of Seduction

The most recent incarnations of Holmes — Benedict Cumberbatch’s modern-day “high-functioning sociopath” in BBC’s Sherlock and Robert Downey Jr.’s scruffy action hero in “Sherlock Holmes” (2009) — are both so iconic but still true to the book that it’s almost impossible to one-up them. Jonny Lee Miller (who keeps the titular detective British in Elementary), clearly realizing the futility of the situation, must have thought “Screw the book!” and went off on an entirely different path: the sexy sex path. When we first meet Holmes, he’s shirtless and showing off his luxuriant chest hair and manly Celtic tattoos.

“I find sex repellant, all the fluids and all the sounds,” he says as we cut to a shot of sexy handcuffs draped sexily over a sexy ladder. “[But] my brain and my body require it to function at optimal levels, so I feed them as needed.” Ooh, Mr. Holmes, are you trying to deduce me? (Ba-damm-chh.)

Well, it’s certainly a promising start. The dialog has potential and the whole Stephen Hawking-Ryan Gosling thing is definitely innovative. However, as the pilot drags on, Miller seems unable to decide between character choices, switching uncomfortably from a poor man’s Jack Sparrow to an eccentric fop to an excitable dog-man. Eventually, he gives up altogether and reverts to a basic hair-trigger temper and uncontrollable need to acknowledge his own brilliance.  It’s only his British accent that keeps him from being completely boring.

Now, this could make sense in-story. When we first meet Holmes (before the line about sexy sex), he delivers a monologue to Watson about love as he stands a mere kiss-length away from her. Then, she steps on a remote, and we realize that he was reciting a monologue he had just seen on TV. This combined with his later character “development”,could indicate that Holmes is a narcissistic sociopath — incapable of feeling anything but anger and a need to be acknowledged and adept at replicating other people’s personalities. Unfortunately, while it may be the most accurate portrayal of a narcissistic sociopath I’ve seen in a while, it’s definitely the most boring.

There is nothing inherently wrong with making John, ahem, Joan Watson an Asian woman. In fact, being an Asian woman myself, I was eager to see how they would handle it without making her some mail-order geisha opium dealer from Crouching Tiger, (Not So) Hidden Stereotypes. And then, they cast Lucy Liu. And it all went to hell.

Has she OD’d on Botox? Throughout the entire pilot episode, I counted all of three expressions — all slight variations of her default look, which is that of a wombat high on nitrous oxide. If Keanu Reeves decided to do a Kristen Stewart impression, the result would look and sound exactly like Liu.

But we can’t blame Liu entirely; the screenwriters are just as guilty. In one scene, as Holmes and Watson are about to enter a crime scene, Holmes calls Watson a “glorified helper monkey.” And that is exactly what she is, not just for Holmes, but for the audience, the plot, the director, everyone.  For some weird reason, the screenwriters forgot to give Watson a personality.

Watson’s  dialog could belong to anyone — every single line is either a question to clarify the plot or a robotic response to one of Holmes’ constant jibes. She serves no purpose but to act as in-dialog exposition where the writers were too lazy to show-not-tell. She’s supposed to be an adult ex-surgeon, but she uses phrases such as “scary administration guy” and “doesn’t mean it’s not awesome!” Her most insulting burn begins “You’re just embarrassed because…” When Holmes insults her (which is often), she gives a stoned-wallaby double-take, blinks slowly, and plods on with another question. Even when he blatantly crosses the line and talks about her past in what is clearly meant to be a cathartic scene, she responds as though she’s complaining about a mildly irritating bowel problem. Wait, hang on, what if this is actually intentional? What if Liu is playing Watson as the Rain Man? Golly, CBS, you’re brilliant!

Not so “Elementary” after all

With both members of the dream team so sadly butchered by big names like Liu and Miller, the rest of Elementary just disintegrates into yet another cookie-cutter police procedural. The only people who would benefit from watching this are recovering masochists wishing to wean themselves off of their cattle prod fixation.  I’ll be watching this just to see if it gets any better, since it couldn’t possibly get any worse.

For the rest of you screaming for your Holmes fix, I’d recommend rewatching the Guy Ritchie film and the BBC mini-series, because that’s all you’re going to get until a comparable Holmes adaptation comes out.