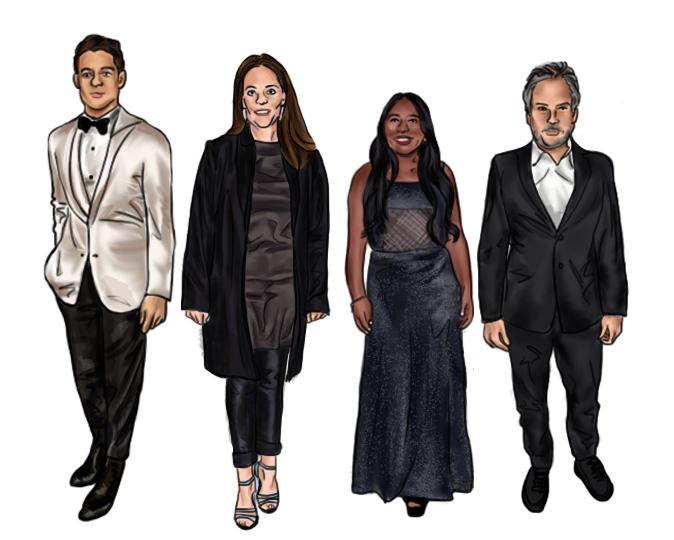 Silver Screen Selections: Our film favorites for the Oscars

From warring royal subjects in “The Favourite” and “Mary Queen of Scots” to the exploration of race in “Black Panther,” “Black KkKlansman” and “Green Book” to an inside look into the music industry in “A Star is Born” and “Bohemian Rhapsody,” this year’s Oscar-nominated films span myriad genres. Before the Oscars arrive on Feb. 24, take a look at our recommendations for the Oscar winners plus a few of our own original categories.

“Roma’s” beauty lies in how raw the emotions and experiences of the characters feel. While the main characters have fewer spoken lines than they would in standard films, the viewer’s connection with them is stronger than ever.

This Netflix exclusive chronicles a year of the life of Cleo (Yalitza Aparicio), an indigenous maid to an upper-middle-class family in Mexico City during the 1970s. Much of Cleo’s character comes through in the way she interacts with her environment, making the whole film feel even more personal and real. Seeing her delicate treatment of her both employer’s children and their household helps define her reserved personality.

The aesthetics of “Roma” are particularly intriguing, as the film emanates beauty and vibrancy despite being shot in black and white and lacking grandiose landscapes. This simplicity captivates the viewers in a movie that can often feel slow in its exhaustive depiction of Cleo’s life.

“Roma” also delivers a candid look at the racial and socio-economic aspects of life through Cleo’s relationships with those close to her. Her romantic interest and employer family appear to love her deeply in most scenes, but when life gets hardest, the class difference emerges. The viewer sees Cleo’s pain in those few moments when others snap at her or deride her based on her profession.

While not the most fast-paced or large-scale film, “Roma” demonstrates more passionate and unembellished emotion than any other movie we’ve seen in recent memory, and that’s why it deserves Best Picture.

“Roma” is personal for director Alfonso Cuarón. He grew up in the upper-middle-class neighborhood the film is named after, and the main character, Cleo, is based on his own caretaker. But Cuarón wasn’t interested in filming the past through rose-tinted glasses. While some scenes exude nostalgia, the movie gives an honest look into the lives of his own family and many like it.

The camera moves slowly and deliberately, usually with wide shots that take in every granular detail. Cuarón often minimizes the main characters in the frame — they frequently occupy little space, are out of focus or are obstructed by objects and extras. Despite this distinct lack of close-up shots to capture facial expression, the viewer learns volumes about Cleo’s relationship with her employer family and the world through the way she moves and acts within the frame.

Cuarón also made the choice to have the camera follow Cleo’s perspective at all times — not always showing her, but always staying in her space. The viewer only sees and knows what Cleo does, binding the viewer’s understanding of people and events to Cleo’s understanding. What shocks her surprises the audience too, and what perplexes the viewer puzzles her as well.

Cuarón’s artistic direction and the  reconstruction of environments from his childhood all serve to make “Roma’s” themes of race and connection resonate even more deeply.

Olivia Colman’s performance as the 18th century British Queen Anne in “The Favourite” is impressively eerie and heart-breaking. Queen Anne, who struggled with morbid obesity and often erupted into fits of anger and depression, is certainly a challenging role. Colman, however, fearlessly takes her on, embracing the idiosyncratic character with strength and vivacity.

Beyond Colman’s physical transformation — which includes gaining about 30 pounds to play the role — her personal transformation is remarkable. Colman portrays Queen Anne’s unrelenting insecurity and neediness in some scenes with capricious, cringe-inducing screaming outbreaks.

In other scenes, Colman’s performance is more subtle, relying on facial expressions to portray Anne’s inherent loneliness. At the end of the movie, she even manages to act using only the left half of her face, imitating the symptoms of Queen Anne’s chronic illnesses that lead to her death.

Even through the bizzare humor written in the script, Colman still evokes a sense of melancholy with every line.

It’s this sheer depth of performance, masterful spin on a historic character and ability to elicit the simultaneous pity and spite of audiences make Colman a shoo-in for the honor of Best Actress.

Known for his buck teeth and gorgeous singing voice, Mercury is a global icon with a distinct personality and tone, a challenge for any actor. However, Malek fills the role with authenticity and effervescence. Acting behind a pair of huge, false teeth, Malek portrays Mercury’s larger-than-life stage persona with uncanny accuracy.

Watching Malek’s imitation of Mercury’s final performance at Live-AID is surreally similar to the real show. He doesn’t hold back, flamboyantly strutting on stage in extravagant outfits and unapologetically filling the screen with a vivacious personality reflective of Mercury’s. And while Malek boldly takes the stage in most scenes, in others he shows Mercury’s sadness with poignancy.

Malek’s portrayal of the rock icon combines immense exuberance with tragic emotiveness. His intense and lively performance is more than deserving of the Best Actor award, giving new life to the unforgettable Freddie Mercury.

Cory Finley’s “Thoroughbreds” is an intense and thoughtful exploration into the teenage mind with a stellar cast and witty writing. This movie deserved at least one nomination. Our honorable mentions for this category are “Annihilation,” “Disobedience,” “If Beale Street Could Talk” and “Eighth Grade.”

Charlie was faced with the challenge of playing Jackson and Ally’s dog, and handled it with confidence and cuteness. He was our favorite part of the movie and the Best Animal Actor of the year. Our honorable mentions for this category are the horse Honeymooner from “Thoroughbreds,” the rabbit Hildebrand from “The Favourite,” the cat Romeo from “Bohemian Rhapsody” and the dog Borras from “Roma.”