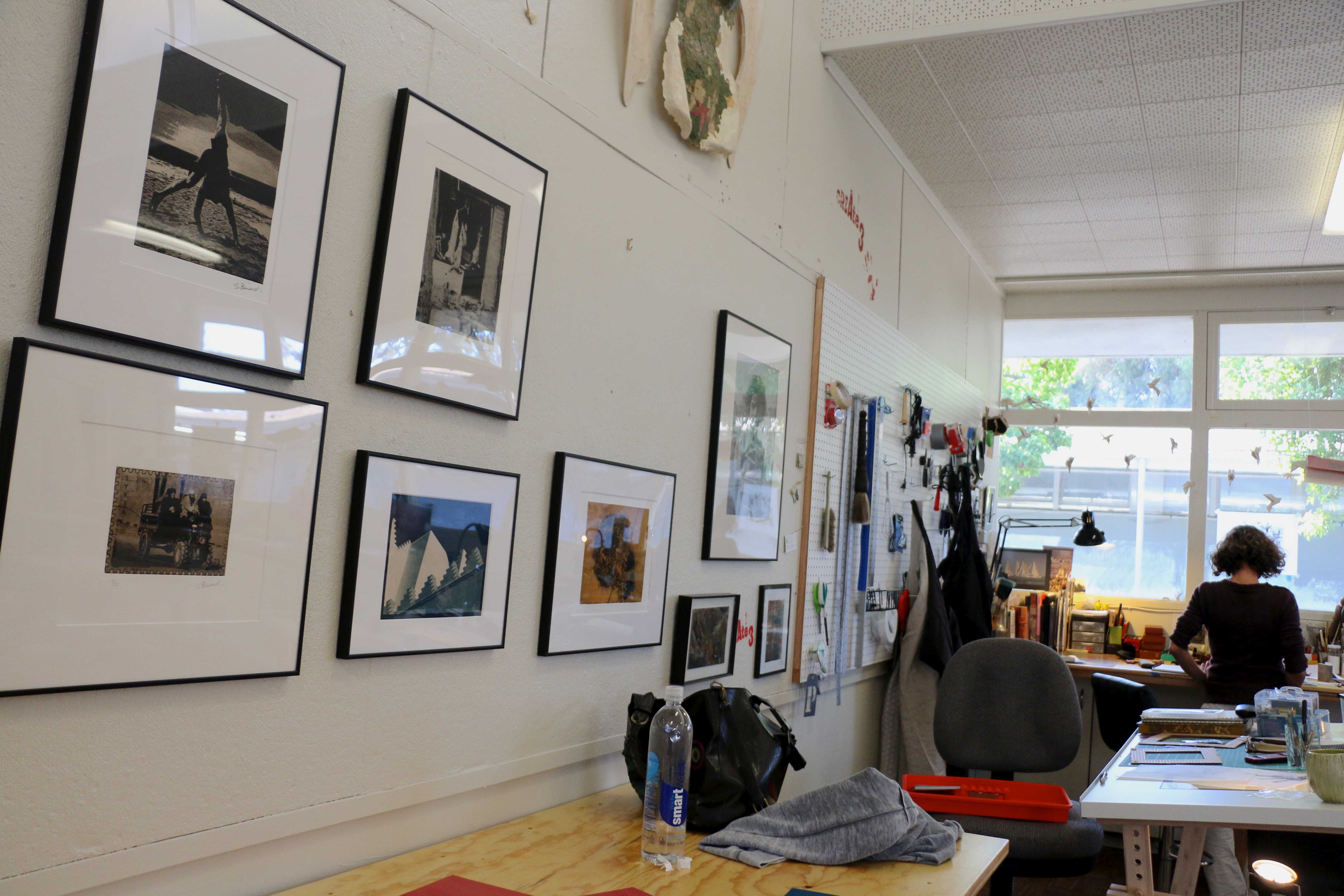 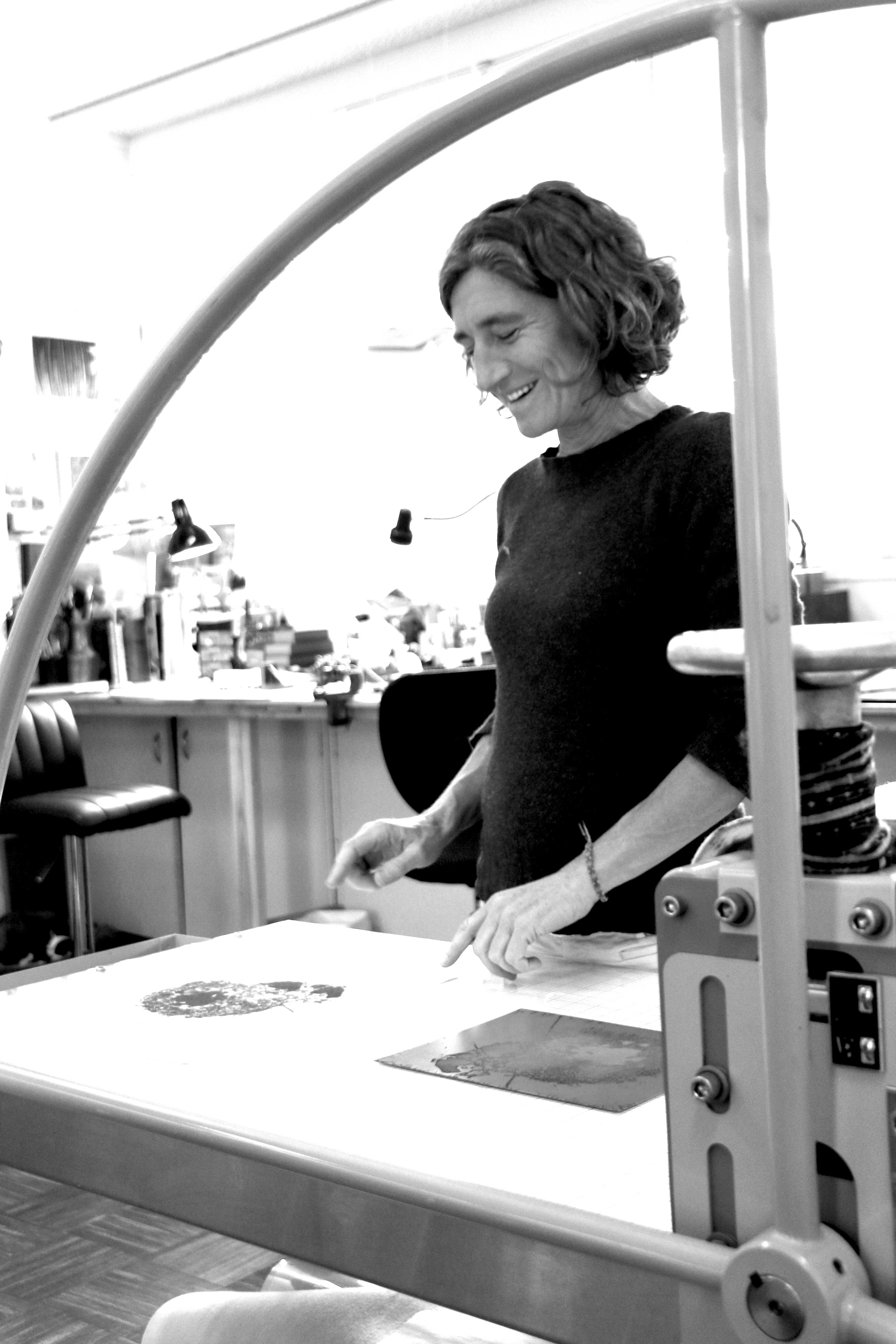 Even three doors away from Studio E3, located in Cubberley Community Center off Middlefield Road, a wild range of sounds can be heard spilling out the door. Everything from the sharp snip of leather being cut to the high-pitched squeak of a mysterious wheel resonates through the halls as the studio, its door fully ajar, approaches ever closer. There’s an idea of what to expect from this place — some leatherwork, maybe a bit of screenprinting — but like the inhabitants within, it tends not to settle down too much.

This is the art studio of Servane Briand, leather and bookbinding wizard.  When she speaks, it is with a native French accent, and almost always excitedly about some new medium she’s just dying to show off. Indeed, a quick glance around the room makes it look less like it’s just Briand and Paloma Lucas, her fellow artist in E3, and more like a veritable clown car of artists works here — leather books, screenprints and various pieces of wax art are strewn about the space, with a range of subjects as wide as the media themselves. Over here, it’s a book about bicycles, the pages around and held together by rivets, just like the bikes they show. There, it’s a piece of leather decorated with a laser-cut photo of a ribcage, the leather itself once the skin for the animals featured within. erratically, but once she chooses a course, she works methodically.

It’s not uncommon to walk by her studio over the course of several hours and see her working on the same piece of leather over and over, paring it with special knives until its once-ragged surface is indistinguishable from a piece of paper, it’s previously thick folds now undetectable to the touch. But as focused as Briand seems now, she definitely has not always been like this.

“To be honest, I have looked for something I like [to do] for probably many years,” Briand says.

These many years began in France, where Briand was dead-set from straight out of high school to studying both science the humanities. Thinking it would be easier to go into one then transition to the other, Briand pursued a business degree, only to find almost immediately that it was not a path for her. Despite this, France’s ridgid education system kept her locked in place and she went on to finish her business degree.

After college, Briand bounced around jobs for a few years, which took her from Paris to San Francisco to Palo Alto and finally back to Paris, where she found herself at yet another major crossroads — Briand received a tantalizing job offer to work in cognitive psychology at University of California San Diego, the first program of its kind in the United States. Despite this being a field Briand had wanted to work in for several years, she turned the job down for another offer in Paris, where she eventually met her best friend of 25 years, a decision which still haunts Briand.

“I tell this story because I hope it inspires people to just plunge in,” Briand says.

After a few years at her new job, Briand and her friend quit their jobs together and, for a few years, left to find their passions. It was during this time that Briand met her husband, Emmanuel Mignot, the professor of sleep medicine at Stanford University, and settled down in the Bay Area. After the Silicon Valley bubble popped in 2008, Briand began attending Foothill College for web design classes, where she met Kent Manske, the book arts teacher there, and the flame of art was ignited.

“I was just so taken by … how fantastic it was to do something with my hands instead of the computer,” Briand says. “I took Kent’s class and I never looked back.”

The rest is history — for the past six years, Briand has devoted her days and nights to her art, and encourages anyone else struggling with their passion to break off from what they’re doing, just as she did.

“I was never really in business … I was always trying to find my way back to something closer to what I like,” Briand says.