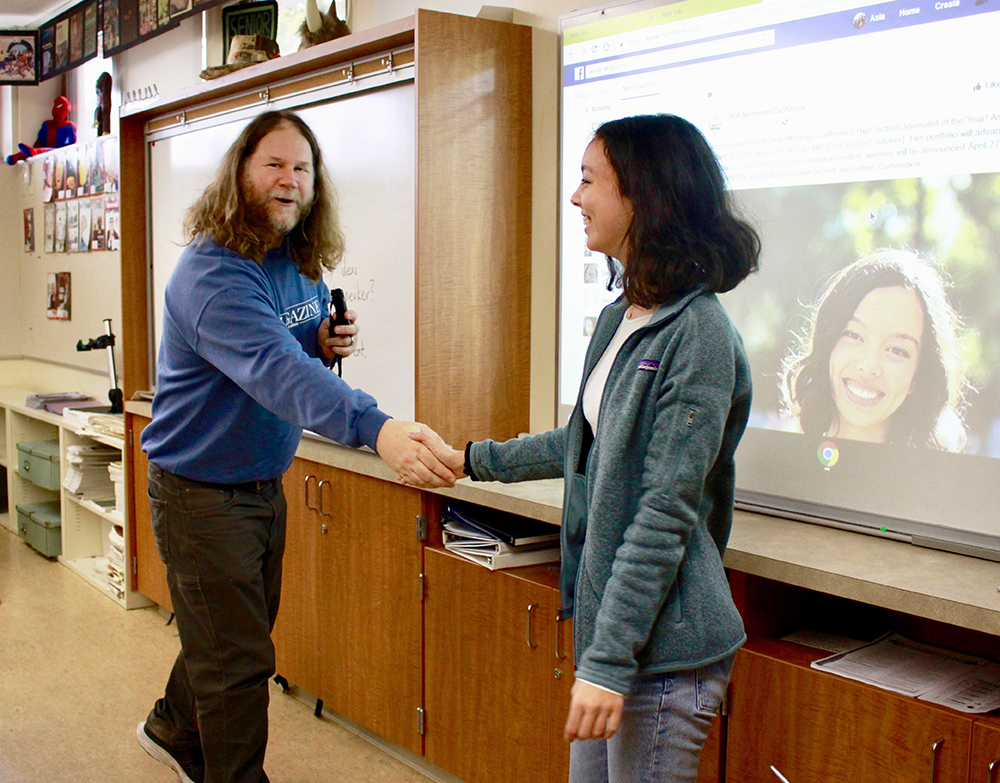 Senior Ashley Hitchings shakes journalism teacher Brian Wilson’s hand as he announces her place as Journalism Education Association's California Journalist of the Year in front of the Verde Magazine staff. Wilson was honoring Hitchings in his role as president of the Northern California chapter of JEA. Photo by Lucia Amieva-Wang .

Palo Alto High School Senior Ashley Hitchings is the Journalism Education Association California Journalist of the Year, according to an announcement last week, and will advance to the organization’s national contest.

Hitchings submitted a portfolio with work from 11 areas of journalism ranging from leadership and teambuilding to news gathering. It also included her work collaborating on “Case 09-13-5901,” which detailed the resignation of a Paly principal and the start of four years of investigations by the federal Office of Civil Rights, and “Heritage of Hate”, which explored Palo Alto’s history of racial violence.

As Editor in Chief of Verde Magazine, Hitchings has been able to leverage her experience as a reporter to support staffers from general story direction guidance to stylistic polish. 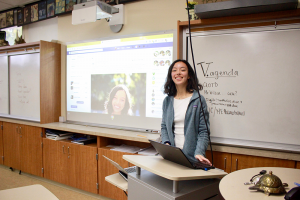 Hitchings poses for the camera after being announced as California’s Journalist of the Year. Photo by Lucia Amieva-Wang

“Being on staff with Ashley has proven to be one of the most enriching experiences I’ve had,” Staff Writer Ben Cohen said. “Her expertise as a leader and journalist are truly awe-striking and I’m so lucky to be able to call her my editor.”

In her capacity as editor this year, Hitchings has worked with her co-editors-in-chief to pilot the new Media Leadership and Management Honors curriculum aimed at promoting more effective leadership and management through assigned readings and exercises.

“The best quality that Ashley brings to our leadership team is that she is consistently caring—as a fellow EIC, as a story writer, and as a friend,” Digital Editor in Chief Asia Gardias said. “I’ve always felt supported by her. She will always lend a part of her heart or brain to any staffer who needs it.”

Verde Adviser Paul Kandell noted that Hitchings’ commitment to journalistic ideals has elevated the quality of both her own articles and those of the staff around her.

“As a reporter and editor, Ashley has been a vigorous pursuer of truth and crafter of important stories,” Kandell wrote in his recommendation letter to JEA for her. “She has been an electric presence in my classroom, modeling journalistic vigor; positivity and purpose in motivating her staff; resilience and creativity in the face of obstacles; and commitment to a powerful editorial voice and strong ethical standards.”

Hitchings is the fourth Paly student and third Verde staffer to have been named California’s Journalist of the Year. Previous winners were Viking Magazine editor George Brown (2011) and Verde editors Evelyn Wang (2013) and Jack Brook (2015).