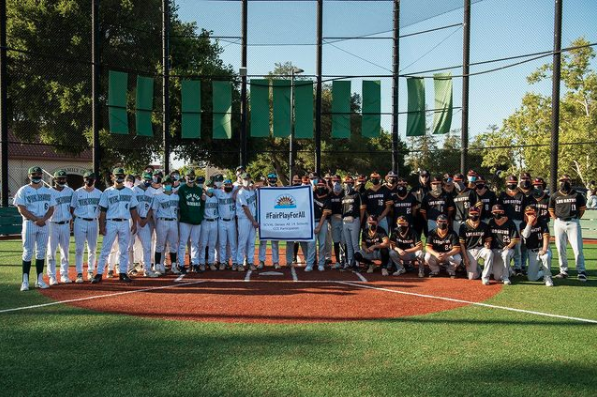 PETITION TO PLAY — The Palo Alto High School and Los Gatos High School varsity baseball teams take a photo in protest of SCVAL’s initial decision to deny schools like Paly and Los Gatos from playing in CCS playoffs. “It’s important for student athletes to play and compete in CCS because it gives them a final goal and something to work for that is motivating,” said varsity baseball player and senior Zander Darby. Photo: Jenna Hickey

Santa Clara Valley Athletic League Board of Managers is allowing season two and season three sports to participate in the Central Coast Section playoffs starting in the coming months.

SCVAL initially withdrew all 14 of the schools in its league, including Palo Alto High School, from the CCS playoffs due to safety concerns on April 29.

This decision came after students, parents and coaches pushed SCVAL to allow its schools to participate in CCS playoffs and threatened SCVAL with lawsuits.

“They [SCVAL] have not only taken away hours of our uphill battles to get a season three, test and play with good health but have also taken part of most of these seniors’ last chances in competing to win a CCS title,” Lynbrook High School basketball player and senior Hali’a Yee wrote in a widely shared Instagram post on May 5.

Following the decision to allow student-athletes to play in CCS, Fetter says that he is looking forward to the playoffs for the comradery and prolonged season.

“Obviously the team is super excited to just be given the opportunity to compete,” Fetter said. “Win or lose, we all know that we go out there and give it our all, and that’s the best we can ask for in this crazy year.”

Fetter is optimistic about his last year on the Paly swim team.

“Honestly, this [season] has potential to be our first [CCS] title in team history,” Fetter said.

Additionally, the board voted against crowning regular-league champions, but will still crown CCS champions.