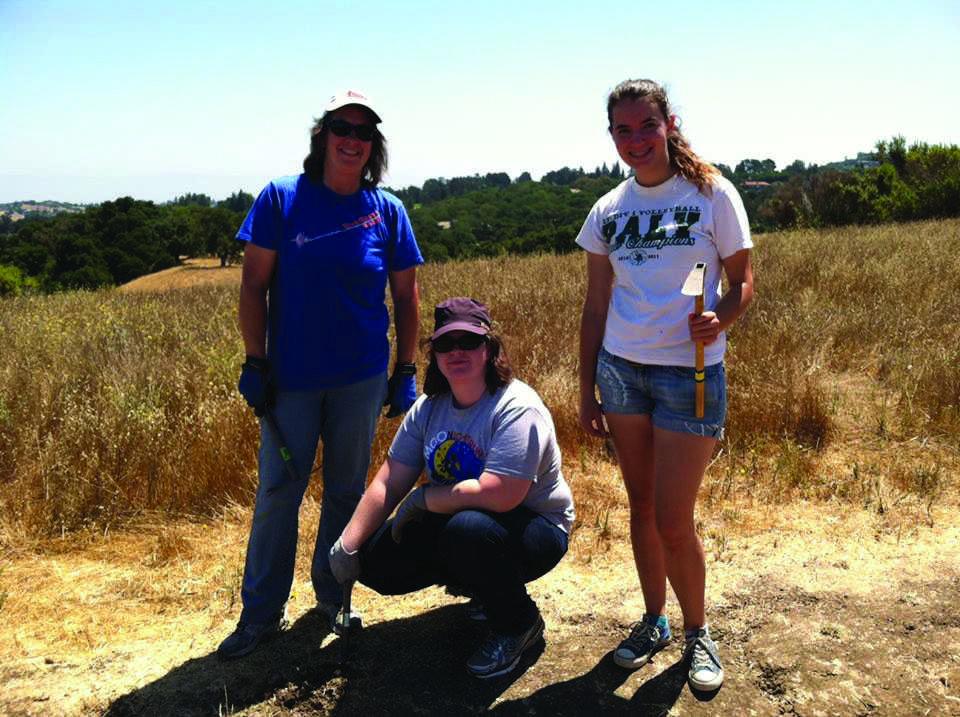 The gold award challenges High School girl scouts to identify and solve a problem in their community. Cayla Wanderman-Milne, a Palo Alto High School senior, chose to eradicate the Purple Star Thistle from Arastradero Preserve. Wanderman-Milne, who has been a girl scout for 10 years, was drawn to this opportunity as she saw a way to express her passion for the natural sciences and help her community simultaneously. Wanderman-Milne began volunteering at the Arastradero Preserve in the foothills of the Santa Cruz Mountains last year.

Through an extracurricular class at Palo Alto High School called Science Research Project, Wanderman-Milne did field work with scientist Joan Dudney, who helped her choose a community issue to work on at Arastradero.

“I talked to my mentor there and she said that there’s this weed, Purple Star Thistle, that you can eradicate,” Wanderman-Milne says. “There’s enough of it that its a big deal but not so much that you can’t do it in one summer.”

At each location, Wanderman-Milne used a handheld GPS to enter the coordinates of the plant. Later, she would use the GPS coordinates to come back and uproot each clump one by one.

According to Wanderman-Milne, mapping the plants proved to be one of the most difficult parts of the project and took her over 30 hours to complete.
Once she had created a complete map of the Purple Star Thistle, Wanderman-Milne began hiking each trail again to eliminate the plants, which also presented a set of challenges to her.

“I didn’t have to go to every part of the preserve anymore but then you have to hack at it with a hoe to get rid of it,” Wanderman-Milne says.
However, she was able to obtain help from volunteers who took some of the weight off her shoulders.

“I had one volunteer event where I had maybe fifteen people and at the end of the day we just had bags and bags of Purple Star Thistle,” Wanderman-Milne says. “That was rewarding to see how much work we had done.”

“It was super satisfying when I drove home for the last time knowing it’s done, I did it,” Waderman-Milne says.

Wanderman-Milne believes that the program has given her an opportunity to make a difference in the community and have a positive impact on the environment.

“I think it’s really important to stay connected to ecology and preserving the Earth, because it’s one of the most important things that everyone has the ability to do,” Wanderman-Milne says. “It’s definitely something that I care about that I think others should care about too.”

Dudney agrees, stressing how important it is for students to be aware of how they can make an impact.

“It’s very easy to ignore nature when living in manicured urban areas,” Dudney says. “It’s imperative to remind students of this connection and show them how they can help the environment.”

Wanderman-Milne hopes that through her work she has inspired others to help make an impact at Arastradero.

“The gold award is all about inspiring others,” Wanderman-Milne says. There are tons of volunteer opportunites up there [at Arastradero]…if I can just get more people into volunteering at Arastradero that would be awesome.”

While Wanderman-Milne’s project has allowed her to realize the importance of protecting the environment, her biggest takeaway from the project is what she has realized about herself and her ability to make a difference.

“I feel like I learned that basically I can make things happen,” Wanderman-Milne says. “Before, I kind of felt like ‘Oh I’m just a high schooler,’ I can’t really do anything thats a big deal. But I realized that I can think of something really cool and make that a reality.”