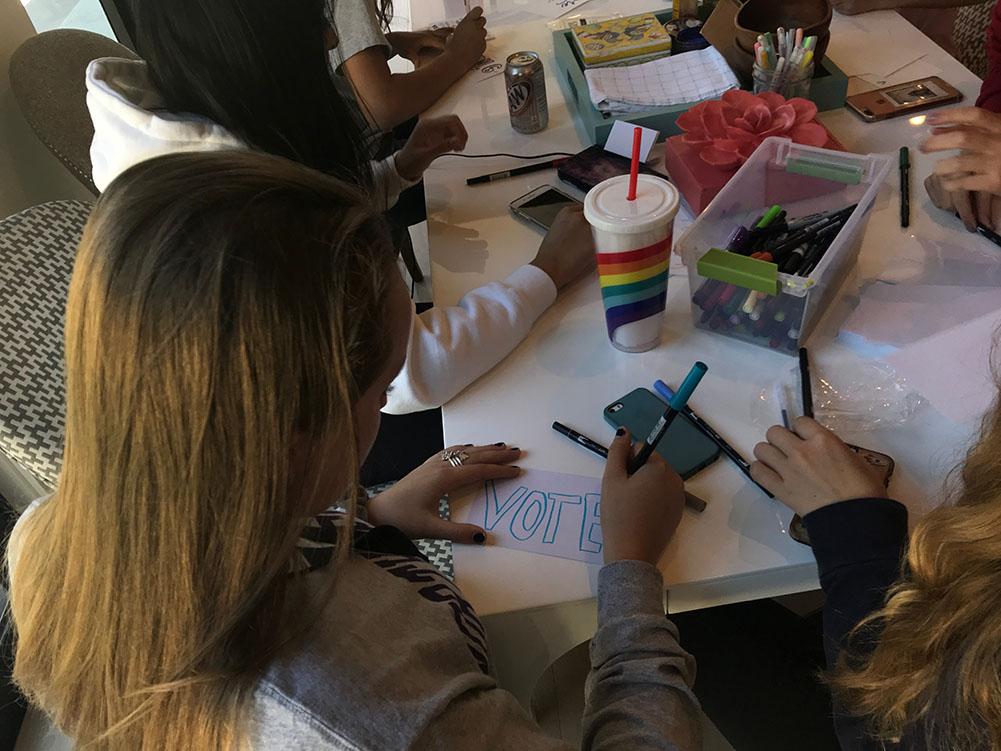 Saturday at the Spencers’: Getting Involved in the Civic Process One Postcard at a Time

The sound of laughter and the scratching of pens fill the large space, and the smell of freshly baked goods gently drifts through the house.

Guests sitting in her spacious living room cheer enthusiastically as Cristina Spencer announces that the group has handwritten and mailed upwards of 500 political postcards to voters across the country.

After an encouraging start to their Saturday meeting, parents, children and guests huddle elbow-to-elbow around tables in the two main rooms of the Spencers’ modern Atherton house.

As kids take a break from decorating postcards to play in the pool and indulge in homemade snacks and celebratory donuts, several guests enthusiastically greet newcomers, and those already seated around the long wooden table shuffle to make room for them.

Christina, along with her husband Graham, began hosting civic engagement events at the end of this summer in order to be more involved in politics.

“After a bit of experience working on the 2016 campaign, I think we felt like we could have done a little bit more,” Graham says. “For this [midterm] election, it just feels more engaged and grounded to be writing postcards and to actually be involved in the workings and functionings of democracy,” Graham says.

But  there’s more than one driving force fueling him to be more involved in politics.

“Part of it is that we want certain candidates to win, but even more broadly it’s that democracy doesn’t work unless everybody does a little bit,” Graham says.

Many of the guests attracted to the Spencers’ Saturday events share this sense of civic responsibility.

In a short time, the Spencers have established a safe space where anyone and everyone interested in becoming more involved in the civic process is encouraged to do so.

By using the power of community to impact elections, the meetings have attracted like-minded folk such as family friend Gina Parks. Keeping with this spirit, Parks says she not only wants to make a noticeable difference in the election results, but also pass the civic spirit to her children, who visit the Spencers’ house with her.

“With one person, it feels a little lonely, but in a group of friends and family, it feels more impactful.”

“Sometimes I feel like, ‘How can I really make a difference?’” Park says. “With one person, it feels a little lonely, but in a group of friends and family it feels more impactful.”

The Spencers’ eldest, Gwendolyn Spencer, a freshman at Woodside Priory, is just as passionate as her parents about political engagement and the civic process. She’s active in school clubs and regularly attends marches with her grandma, keeping the feeling of civic engagement alive in the family. The Spencer family’s political spirit clearly transcends generations.

“[The meetings] are an interesting way to implement [civic engagement] into daily life,” Gwendolyn says.

At the weekly meetings, the children typically draw on the front of blank white postcards, some adorning their cards with slogans supporting a specific political candidate, and others simply writing the word “Vote!” in big, bold letters.

The postcards are sent to the locations that the candidates request, such as regions known for being swing areas, where either political party could win the majority.

“[The postcards] have a significant impact because [although] there are a lot of voters who are already committed to one side or another, the ones that don’t know which side to choose just need one little push to be persuaded,” says freshman Sophia Baginskis, who began attending recently.

At the Sept. 15 meeting, large metallic balloons adorned the entryway and a sense of accomplishment hung in the air: the Spencers and their guests had written and sent over 500 postcards. In addition to the 500 already written, that same day they managed to write and send 180 more.

At the start of every meeting, sheets of addresses and candidates are passed around, and over the course of the several meetings, Democratic candidates are supported and advocated for by the group.

The Spencers’ work focuses on supporting Democratic candidates across the country, and they hope to flip the House of Representatives through the midterms. Part of the reason they were extra motivated to support Democrats was due to the surprising loss in the 2016 presidential election.

Some of the candidates’ most popular stances are along the lines of solving local and widespread environmental issues, supporting immigrant and minority groups’ rights and advocating for middle and lower class citizens. As most of these values are shared by the guests of the meetings, it is evident that the guests writing the cards want the candidates to win, too.

Each weekend, the Spencers invite “everybody we [they] know, neighbors, friends, relatives, sometimes friends bring friends,” Christina says. According to her, some attendees continue to return each weekend because they enjoy the civic events so much.

Although by participating in postcard production, guests are promoting Democratic candidates, the primary takeaway each session is that no matter who you vote for, you should vote. Without civilian involvement, democracy is virtually pointless, Graham says.

“Not every postcard is going to flip someone’s vote, but […] that [postcard writing] may have contributed to a few people changing their votes,” Graham says. “If not changing their votes, at least getting [them] out and voting when they would have otherwise not voted.”

The Spencers say they are hopeful that as the word spreads about their weekly efforts, other politically-inclined community members interested in making a national change will show up and get to writing, one postcard at a time.