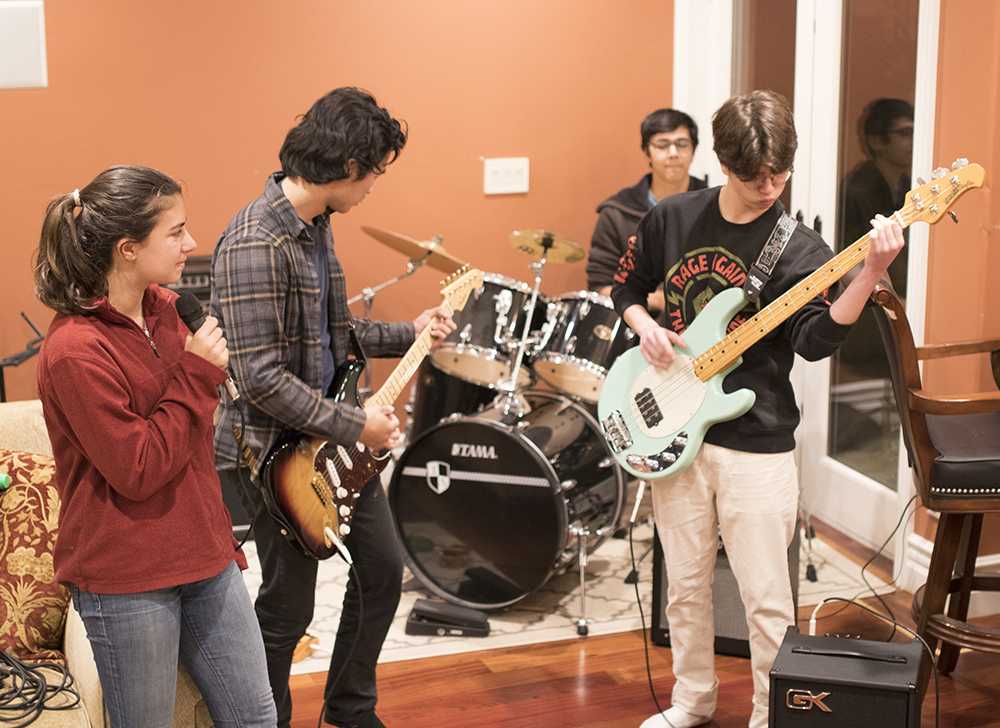 Romaine Calm and Play On: An unlikely group finds their rhythm

FINGERS DANCING around the neck of his guitar, Palo Alto High School senior Andrew Huang nods his head and looks to his fellow bandmates as they adjust their positions; senior Vijay Sharma twists two drumsticks between his hands, junior Gil Weissman skims his left hand across the strings of his bass and senior Emily Tomz taps a mic to the beat against her palm. Each of the band members lock eyes, and as if breaking a trance, release a roar of rhythm.

The four musicians make up the band Romaine, formed in the summer of 2017.  “It [Romaine] is a mashup of original songs and covers in a style that’s a blend of rock, reggae and a little hip hop and emphasis on rock and reggae,” Huang says. “We kind of combine our sounds so we get a fusion of rock and blues and reggae.”

Ranging in age and music tastes, the band is a medley of personalities and backgrounds — bassist Weissman, guitarist Huang, drummer Sharma and singer Tomz — whom each bring their own artistic styles. 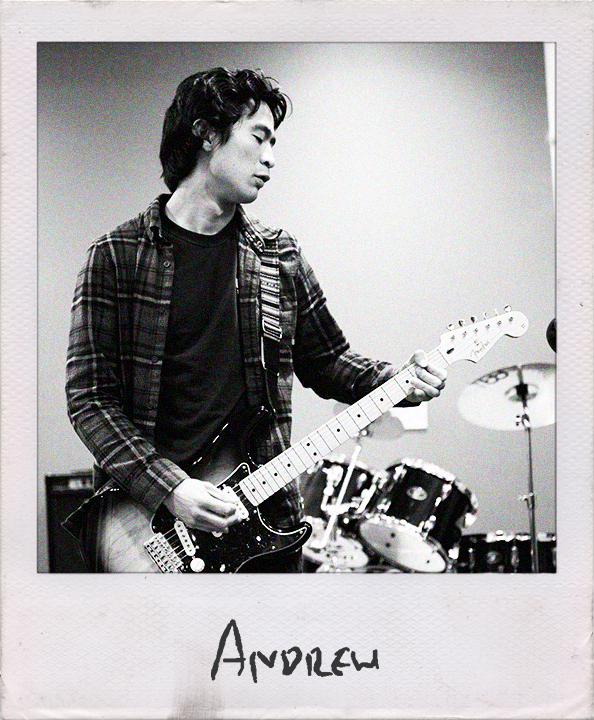 The members of Romaine are each interested in different styles of music, playing an important role in the band’s unique sound as they commonly make up melodies on the fly.

“Sometimes we’ll just be jamming and Gil plays something and we’ll be like ‘Oh that’s super sick,’ and I’ll figure something out that sounds cool with it, and it kind of progresses our sound,” Huang says.

This improvisation is how Romaine tries to advance their individuality.

“Instead of trying to search for a song that tries to please all of us, we sort of make it so that we do our own songs,” Weissman says. “By doing that we also get to push it in the direction that we like and make the music line for our instrument more interesting for us.”

I’ve got a feeling

Despite the band’s love for music, it isn’t always as effortless as one, two, three — especially when performing.

“[I’m] always nervous when I  perform,” Tomz says. “At Quadglobe, I was really nervous and I think it took like the first or second song to kind of actually get into it and be comfortable because it was in front of the school and … you’re completely exposed and up for judgement, which is scary.”

Being nervous is a natural part of performing which the band has had to learn how to deal with.

“Sometimes when I get nervous, I just don’t look at the crowd … I look at the guitar and Vijay and Gil for cues and stuff,” Huang says. “I’ve gotten lost in the music before. When that happens it’s always a long improvise jam.”

However, the band likes to keep in mind that their purpose is not to just to perform for others — it is really to have fun. 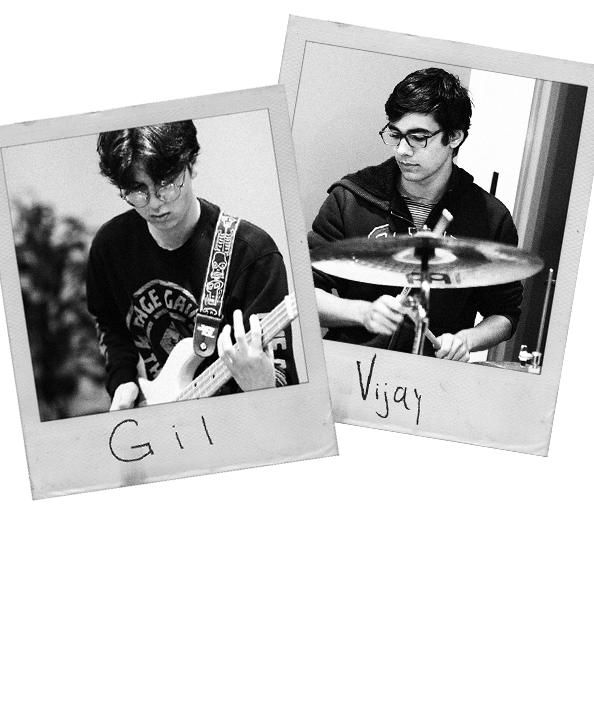 RAGING ROMAINE Members of the band practice some of their routines one night after school. “Not everything’s about technique, you also need emotion [to] make it sound good,” drummer Vijay Sharma says. The band members have learned valuable lessons from their experience performing together, and hope to continue in the future.

“You realize it’s just for fun and you get into it and get excited about it,” Sharma says.

With a little help from my friends

Huang first became interested in the guitar after watching a video of street musician John Butler in fifth grade.

“He had this thing where he wailed on his acoustic and I thought that was really cool,” Huang says. “I was like, ‘I want to do that.’”

From there, he bought his first guitar and began to teach himself how to play. The more he practiced, the more he wanted to form a band.

“When you play rock music, it’s kind of boring playing by yourself, so you want to play with other people,” Huang says.

Similar to Huang, Sharma started practicing the drums from an early age, yet soon realized that he wanted to play with others and perform.

“It’s nice to have something to actually showcase your work instead of practicing in your own little bubble,” Sharma says. “And you realize there’s no point in playing unless you show other people.”

Throughout their middle school years and the beginning of high school, Sharma and Huang would often practice together, and eventually met junior Gil Weissman.

“I got in contact with Andrew when I overheard him talking to one of our mutual friends saying that he wanted to start a band but needed a bass player,” Weissman says.

Weissman eventually joined the band at the end of the 2015-2016 school year.

“Gil’s great because he’s the best bass player I know and he’s hilarious, and so we kind of made a trio and we played mostly rock,” Huang says. 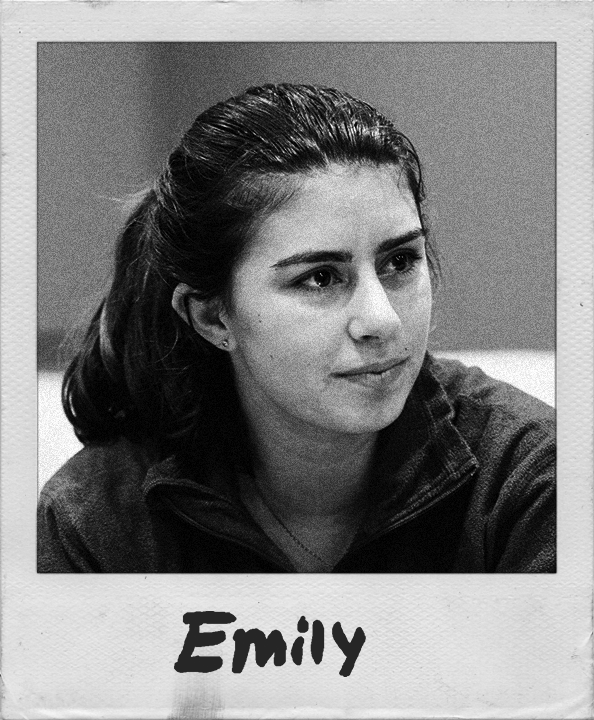 I saw her standing there

While the group was full of talented instrumentalists, they lacked the vocalist they needed to become the band they aspired to be.

“The full Romaine thing didn’t really come together until this year because we were looking for someone to sing,” Huang says. “I sang for one gig and I hated it.”

Tomz had sung and played piano by herself before searching for people to perform with. She then sang with a variety friends prior to meeting Huang, Sharma and Weissman.

At first, she felt it was hard to find her groove in the band, but has since grown comfortable with the group.

“It’s like taking a risk, and I’m still kind of intimidated by them because they’re really good at all the instruments they play,” she says.

“You’re completely exposed and up for judgement, which is scary,” senior Emily Tomz says.

The long and winding road

Although his bandmates will be leaving Palo Alto after the summer, Weissman has another year at Paly during which he hopes to become part of another band.

“There’s lots of talented musicians at this school and I’m sure I can find a group of people that don’t have a bassist and may be looking for one,” Weissman says. “I just gotta search.”

Being in Romaine has improved all of the members’ musical talents, and has been experience that they would recommend.

“Don’t think you’re not as good as the people you’re hearing because it’s not true,” Weissman says. “As long as you’re having fun playing music, then you’ll sound great, and if you know a few people that play instruments and you know you want to play music, then do it.”

Huang echoes that sentiment. “Play with as many people as you can find, and just figure out who sounds the best with you.”   v